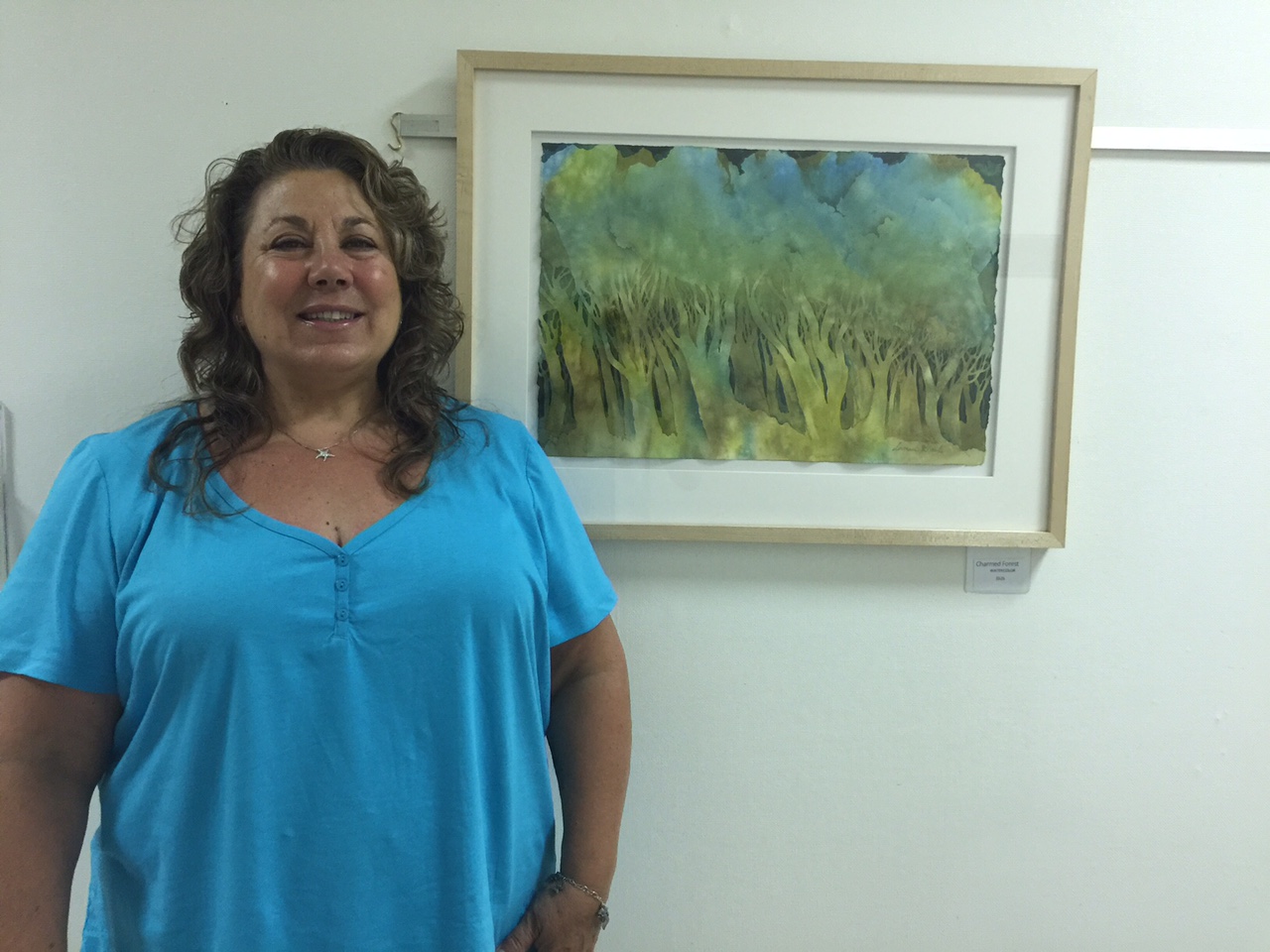 Rimmelin stands next to Charmed, a painting that “kind of came to me as I was working on it.”

The colors of the foliage, the way the dune glass blows against a backdrop of a vibrant South Shore sunset, Lorraine Rimmelin’s watercolor paintings transport you to the window of her beachside bungalow in Mastic where her works are inspired.

Rimmelin loves to use an explosion of colors to paint waterscapes, landscapes and flowers and recently animals. When she enters her studio on any given day, though, she’s just not sure which direction she’s going to take. She lets the colors decide. 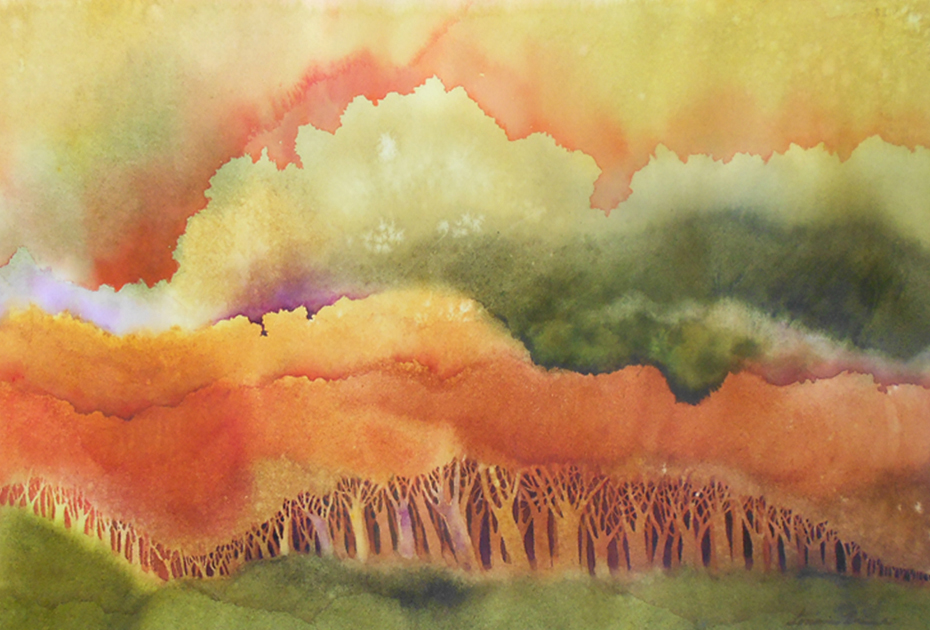 “Every once in a while, I feel like I really need some water views,” Rimmelin said. “Then, I’m right over to where I just love the landscapes and the flowers. All of a sudden, I just get a new idea and I’m like, ‘Oh my God, it would look so good with those colors.’ or ‘Let’s see what I can do with those shapes.’”

It’s how some of the paintings in Enchanted Forest, her collection of landscape watercolor paintings on display at Riverhead Town Hall, came about. She loves the piece, “Charmed,” because of its feminine movement and shape, something that she says “kind of came to me as I was working on it.” 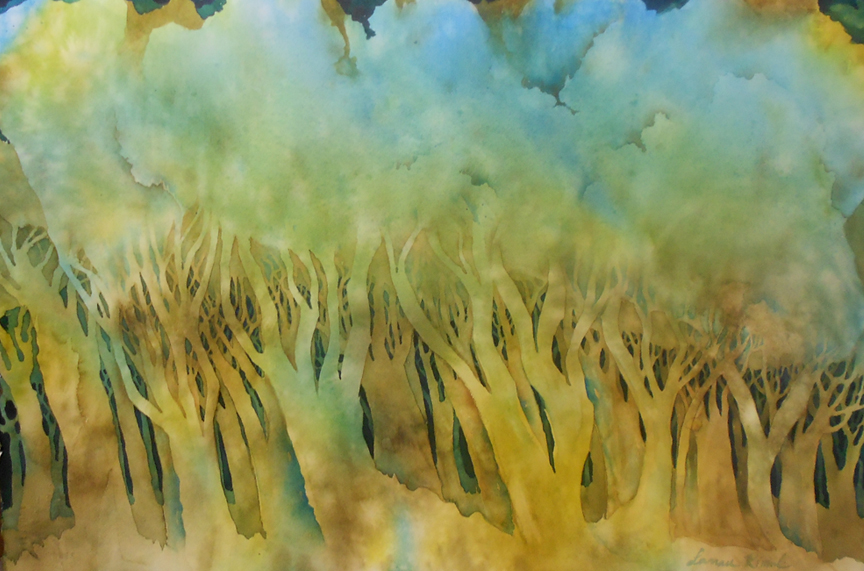 The works in Enchanted Forest are painted using Rimmelin’s signature technique of negative space, in which a painter paints the area around the primary subject like a tree to define the object by implication. It’s something that 15 years ago Rimmelin, who ran a hair salon for 31 years, couldn’t fathom doing. She always loved the look of watercolors, which her mother, an artist, sometimes painted. In the back of her mind, she thought about trying it out, but it wasn’t until both her mother and her sister died within a short time period that she was inspired to paint.

“You realize that everything you’re putting off in life is now, it is absolutely right now,” Rimmelin said.

Rimmelin instantly fell in love with watercolor painting, layering and still having everything show through. The easy cleanup didn’t hurt, either, but her early works weren’t going to be hung on anyone’s walls. 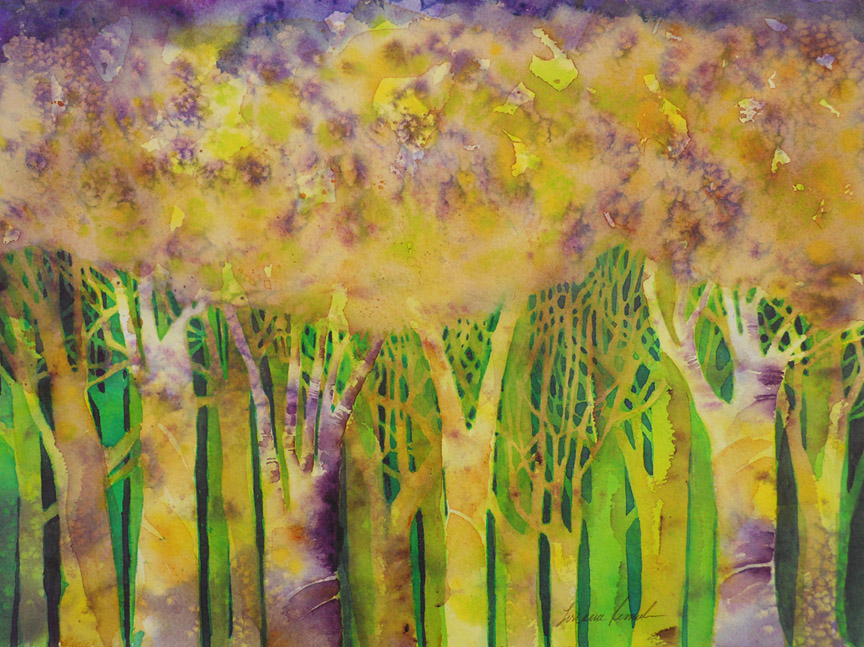 Rimmelin said it’s given her a new appreciation for and connection to her mother.

And it’s allowed her to appreciate and take in her surroundings as well, playfully letting fate and her nature muses lead her in whatever direction they chose.

“They just draw you in and take you down so many different paths in and out of the paintings,” she said.