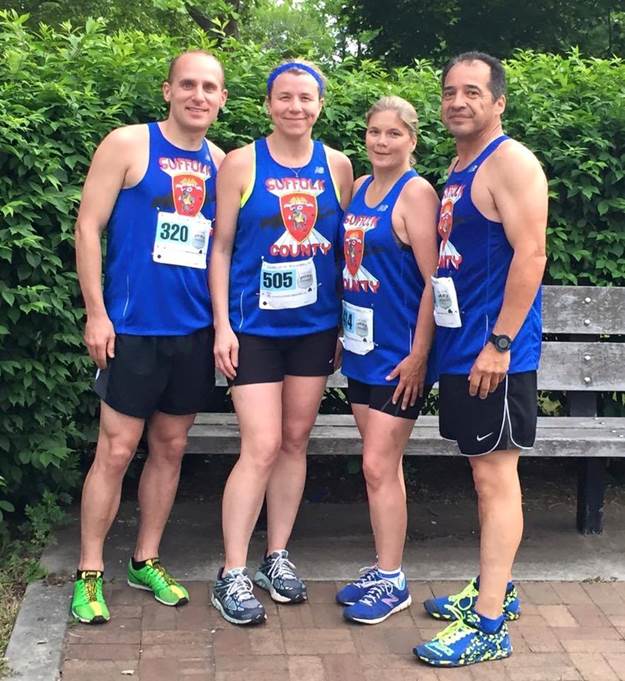 Suffolk County Police Sergeant John Oakley hasn’t run a marathon since 2007. This fall, he’s running in three, starting with the first-ever Suffolk County Marathon Sept. 13, which he views as the most important. It’s the last qualifier for the 2016 Boston Marathon, something he’s been thinking about running since the 2013 bombings.

“I think a lot of runners felt like because of the fact that they did something like that during a marathon, it’s kind of a slap in the face,” Oakley said.

The Suffolk County Marathon is the 11th for Oakley, who has participated in seven New York City Marathons and three Boston Marathons. If he crosses the line in 3 hours and 30 minutes, he’ll get a shot at Boston for a fourth time. It also marks his return to the 26.2-mile running scene after a nearly eight-year hiatus which he spent coaching youth soccer.

“Coaching kind of replaced the fun of the running. I like coaching kids, hopefully pointing them in the right direction,” Oakley said.

Oakley still coaches, but with his own kids older now, he has more time to run and has gotten more competitive in the last year. He ran the Law Enforcement Torch Run for the Special Olympics in May, a 16.5-mile run, which he says was his longest in five years.

“I wasn’t sure I was going to be able to do it, but I did,” he said. “It gave me form confidence and I have to build that up for 23 to 24 miles before the marathon.”

Doing that can be tough with Oakley’s schedule on the force, which goes from a week of day shifts to a week of night shifts.

“Sometimes, I’m tired from working overtime, so I have to try to still work within what I can do,” he said. “When you’re running a marathon, you have to know your body. If you’re exhausted, you should take the day off.”

But Oakley stays on target as best he can. He is beginning to increase his distance runs and is even getting help from his brothers in blue in the Suffolk Police Running Club, which he recently started up again.

“Sometimes, you can fall into that trap if you don’t exercise and stay in shape, which is very, very important for any job that has high stress,” Oakley said. “For me, running is the perfect thing, so that’s why we got the running club going again.”

Oakley hopes that by doing the marathon, he and his fellow participants inspire even more people to get into running and reap the benefits of a healthy lifestyle.

“All these people are going to be seeing it and say, ‘Oh, I want to do that someday,’ and then they fall into it and they start running, which is great,” he said. “Life isn’t all about partying.”

It’s about living it to the fullest, setting new goals and getting back out there one mile, or perhaps in Oakley’s case, one marathon at a time.