Ladies Drink Free is bringing feel good tunes to Patchogue this August. The colorful, Long Island-based band that has made a name for themselves with their danceable groovy sound peppered with improvisation and extended jams opens for Consider the Source at 89 North on Aug. 28.

After a busy summer that included releasing a new single, gigs at Great South Bay Music Festival, Jambalaya Stage and the Brickhouse Brewery the band is winding down their performance schedule as they prepare to put the final touches on their upcoming album.

Long Island Pulse: Tell me about the new single “She’s Venomous.” How did the process of creating, producing and releasing it work? What was the inspiration?
Ladies Drink Free: We shot the video during a night session at The Bunker Studios in Brooklyn. The band loaded in at around 9pm with a film crew and recorded/filmed until about 6am. Needless to say it was a fun yet tiring experience. We did all the audio editing at Suffolk Recording Studios in Patchogue while our film guy, Kevin Shepherd, took care of the visual aspects of the project.

As far as inspiration goes, the track takes musical styles of old school R&B artists and blends them with approachable pop sensibilities. Lyrically, “She’s Venomous” describes the “venomous” feelings of unwanted lust for someone that you know will end up being bad for you. The venom simultaneously pulls you in and eats you from the inside out.

Pulse: Wow, that sounds like quite a night. You’ve been playing together for four years. How has your music evolved in that time?
LDF: The songwriting and part-writing has gotten much more complex from what we were originally putting out. We started incorporating different styles such as Latin, Dixieland and even house music to keep things interesting, something that takes a departure from our older material which generally kept to a more basic Funk sound. This patchwork of sound has led to some interesting results, such as one of our newest tunes “The Ish,” a nine-minute track that takes the listener on a journey through several time signatures, tempos and keys. That being said, we try to keep the focus on the danceability of our music. It’s important to us as performers that the audience has as much fun as we do at our shows.

Pulse: Tell me about the band, who is in, how did you get started playing music individually and as a band?
LDF: The line-up is as follows:

As far as our start goes, we can credit a lot of that to Mr. Ribs’s dad, aka Allan Deitz. Half of the band and the majority of the rhythm section were raised through the same music program. Those core players basically grew up in a bunch of musical projects together along the way. We often credit that history to our tightness as a band, but it probably just helped us not look like nervous fools on stage. All of our wild, adolescent stage experiments primed us to really feel at home in front of a crowd. The band then just came about pretty organically. We were out of high school and still actively involved in music, individually, in varying degrees. On top of that, we’ve all been great friends. It then just became a matter of forming a group and sticking to that. We got together in late 2011 and we’ve held it together ever since.

Pulse: So, I have to ask, how did you come up with the name Ladies Drink Free?
LDF: Well, it started out with us in rehearsal, hanging out, jamming a little bit, and we started to think about band names. One of the guys had a couple of friends who were in the group, The Free Shots. At the time, the first five people who showed up to see them play would receive a free shot. We jokingly tossed out funny names, and eventually we hit Ladies Drink Free. We all sort of laughed at it, but at the same time we raised an eyebrow and thought, actually, that’s a pretty cool name. We kept throwing out other names, but for one reason or another we kept coming back to Ladies Drink Free. From there on we came out with the original tag, “Dirty Funk Music,” and shortly after followed the LDF abbreviation. We knew once we picked this name we had to stick with it, so we’ve just ran with it ever since. 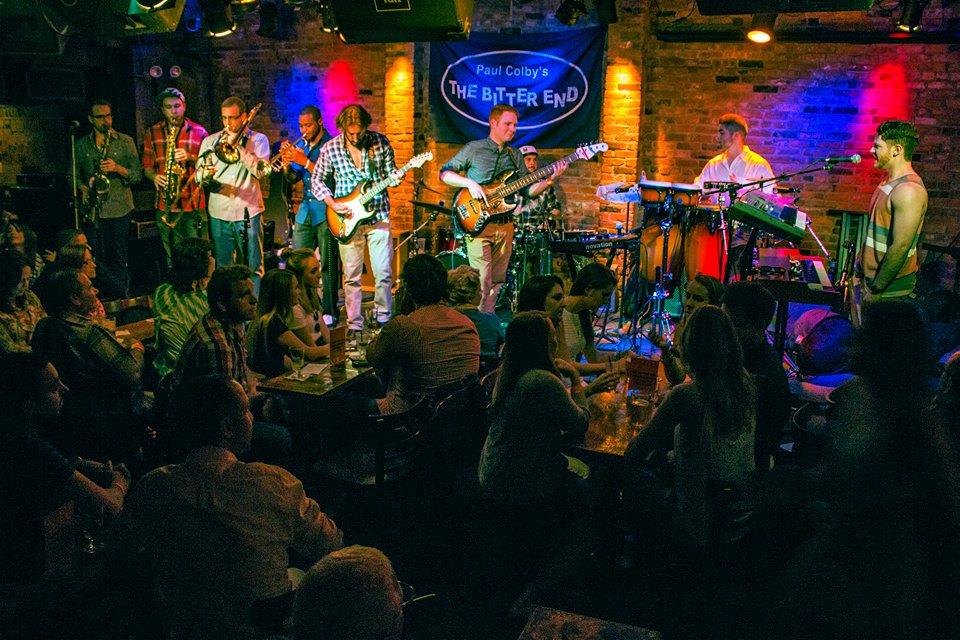 Pulse: What projects are you working on right now?
LDF: We’ve actually got a bunch of exciting projects lined up for the rest of this year. We’re about to release a video for “Swizzle Stick,” the second video off of our upcoming, full-length album. The album’s self-titled as Ladies Drink Free and is set to release this fall. Following the album release, we’ll be setting off on our first official tour. Let’s call it the Weekend Warriors tour for now. Rather than leaving for a couple of weeks and gigging every night, we’ll be making weekend tours from Long Island starting in November. That first weekend in November will be in Burlington, Vt., and Potsdam, N.Y. We’ll be continuing to tour throughout the New England area every weekend after that, possibly through the new year.

Pulse: Where else can we hear you in the next three months?
LDF: Well, as we mentioned, the weekend tours are set to begin in November. Patchogue has always shown us a lot of love and hosted us twice this August. We played all night at one of our favorite spots, The Brickhouse Brewery, on August 8, and are opening for Consider the Source at 89 North on August 28th. September and October will probably remain pretty light so we can put the final touches on the album.