Running 26.2 miles is hard enough. Try doing it with a 45-pound backpack. Billy Richards, a personal trainer at Gold’s Gym in Islip, plans to do just that during the Suffolk County Marathon in September.

Oh, and Richards will have done two races the day before, the The Capt. Joseph J. Boccia Jr. USMC 4-Mile Warrior Run in Northport and an eight mile Spartan Super in New Jersey. So, let’s just get an answer to the obvious question: why?

“I think that comes from my time in the Marine Corps,” Richards said. “You’re always taught to challenge yourself and everything, and I’ve always had that type of personality where I like to raise the bar a little bit.”

Richards has been something of a gym rat since he was 13 and says working out has “always been like a release for me,” but he got into running in 2010 while in the army. He ran a 10-miler at Fort Bragg that June and completed his first-ever marathon in November.

“After a while, you get hooked on it,” he said. 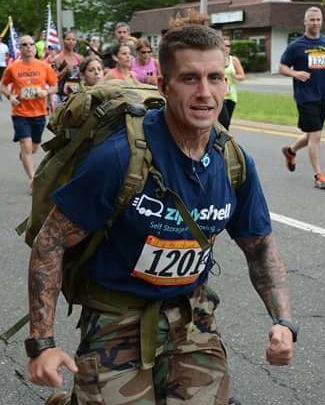 That might be an understatement. Richards now does races nearly every weekend and has done nine marathons and three ultra marathons, anything longer than 26.2 miles, under his belt. But the six races in the 2015 Veterans Running Series, which include Cow Harbor and the Suffolk County Marathon, are extra special for Richards and not because of an adrenaline rush or a chance to strap on a 45-pound backpack. As a veteran himself, he knows what a little community and government support can do.

“In the military, they tell you when to breathe, when to eat, when to sleep, when to do this, when to do that, now all of a sudden you get back in the civilian world, you don’t really have anybody to guide you,” he said. “A lot of guys end up homeless or have a hard time keeping jobs, so it’s really important to make sure veterans have something to help them out.”

The Veteran’s Association helped Richards out this past year when he injured his tricep and needed surgery.

Now, Richards can pay it forward…with his arm at full strength and a little extra weight on his shoulders.