Suzanne Vega’s a cappella song “Tom’s Diner” has been remixed or sampled by numerous artists, including, R.E.M., “Weird Al” Yankovic, Fall Out Boy and a host of hip-hop acts. Why are musicians drawn to this iconic song situated in NYC’s Tom’s Restaurant (shots of which were used to represent Monk’s Café on Seinfeld)? “I guess it’s the simplicity of the hook,” surmised Vega, who was part of the early 80s folk revival. “It really sticks in your mind and the idea of a diner is something everybody can relate to.”

At an early age, the Manhattan-bred singer/songwriter was attracted to the simplicity of folk music. Her mom, a computer systems analyst, and her stepdad, a novelist who often played the blues guitar after dinner raised Vega. But her birth father came from a family of touring jazz musicians. “[A love of music] is one thing that both of my fathers have in common,” remarked Vega, who picked up the guitar at 11.

In addition to jazz, blues and folk, Vega, now 56, was exposed to Motown, rock and roll and classical music, the latter of which she heard in her ballet class. As a modern dance student at the prestigious High School of the Performing Arts, Vega gravitated towards the musicians that played during her classes. They encouraged the fledgling songwriter to perform in little New York coffee houses, which is where she honed her craft. “I liked the stories and the simplicity of [folk] music,” recalled Vega, “and that’s what I wanted to make. I loved The Beatles, Bob Dylan, Leonard Cohen and, much later, I discovered Lou Reed.”

Seeing Lou Reed perform in 1979 at Columbia University led Vega to change the direction of her songwriting. Hearing the fellow New Yorker’s street-smart lyrics encouraged her to write about things other than love. “I suddenly started writing songs like ‘Cracking’ that had spoken word and ‘Luka’ which is about the violent subject of child abuse,” said Vega. “I started to realize I could write about all kinds of things—and not just my love life.”

Vega’s extensive songbook does include some love songs like “Caramel” and “Gypsy,” and yet her three most commercially successful tunes were about Marlene Dietrich, child abuse and observations in a diner. She continues to explore diverse subject matter on her eighth studio album, Tales from the Realm of the Queen of Pentacles, produced by Vega’s longtime guitarist (and former musical director for David Bowie) Gerry Leonard. 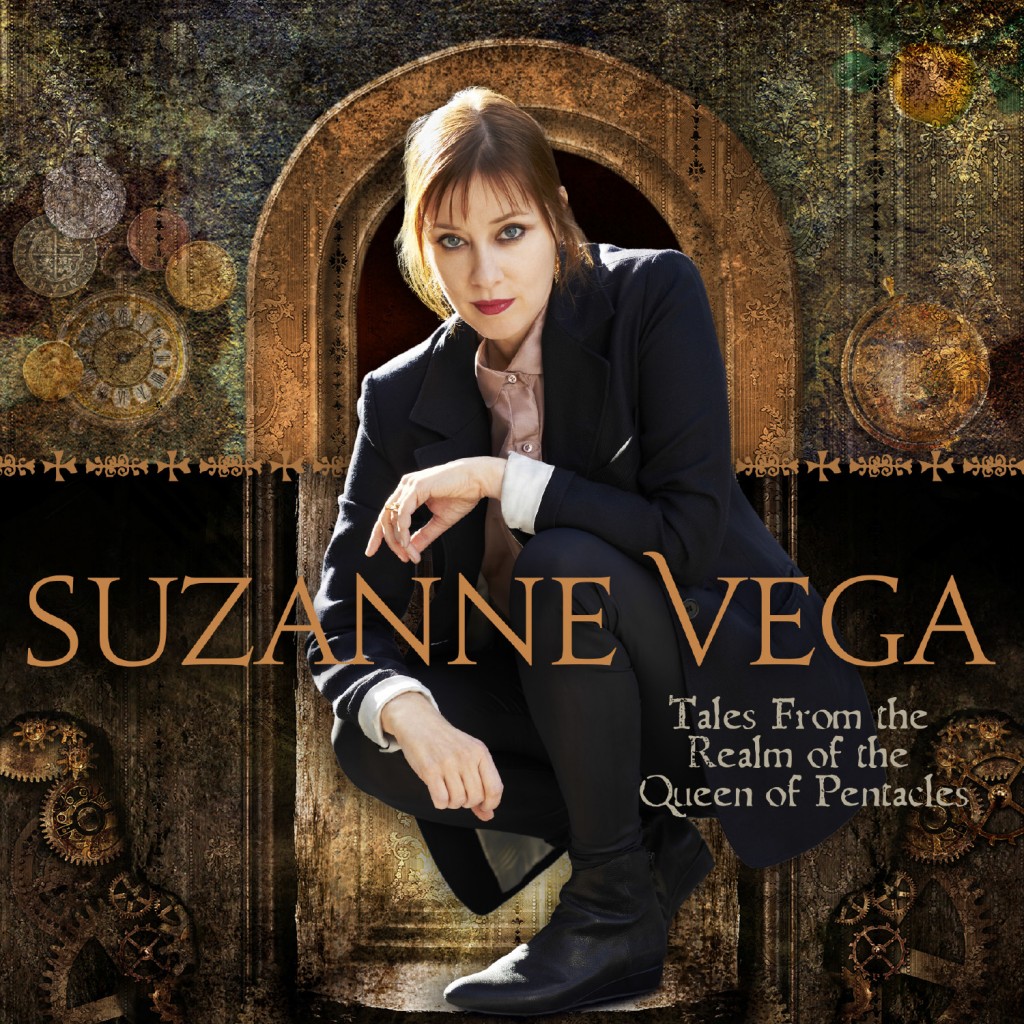 Vega takes inspiration from the tarot on Pentacles. She enjoyed entering the world of metaphors after reading a book on the mysterious practice. The poetic lyricist drew a couple of song titles, as well as the album title, from the tarot deck. “Every image is a kind of metaphor and it tells a story,” noted Vega. “The picture tells the story and sometimes I find it can be deeper than describing things with words.”

On the reflective “Song of the Stoic,” Vega sings from the point of view of an aging man looking back on a difficult life that included an abusive father. After writing the moving song, Vega realized it could be the sequel to 1987’s “Luka.” Conversely, “I Never Wear White,” inspired by the Rolling Stones’ “Painted Black,” is a more upbeat, rockin’ number about self-expression: “My color is black black black/ Black is for secrets/ Outlaws and dancers/ For the poet of the dark.” “I tend towards wearing black,” said Vega. “So what I’m saying in the song is pretty much how I feel. But I think a lot of people feel that way. You use your clothing as a way of making a statement.” 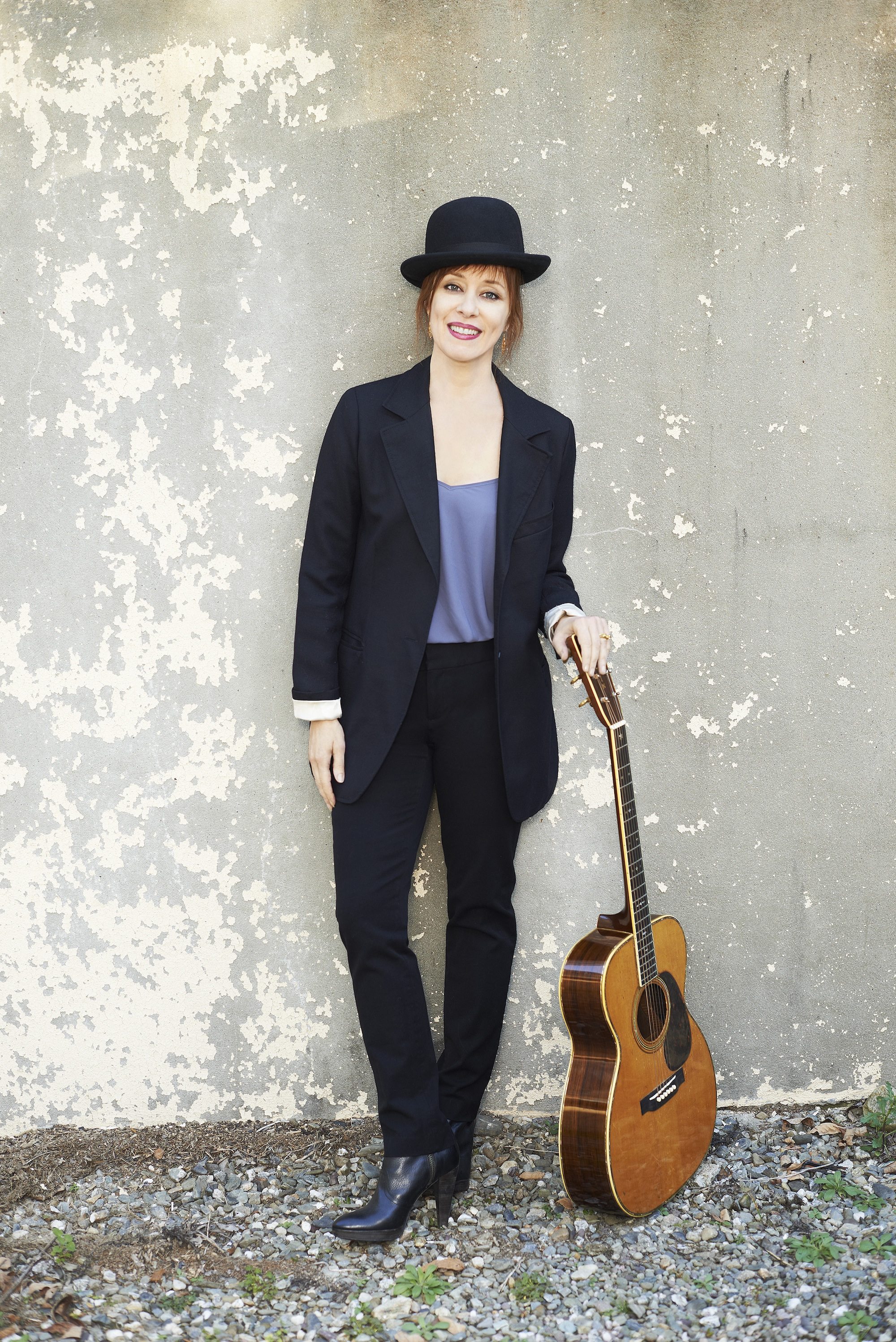 At an early age Suzanne Vega was attracted to the simplicity of folk music. image: george holz

As one of the more sampled artists, Vega incorporated her first sample on the playful track “Don’t Uncork What You Can’t Contain.” It was the Middle Eastern-sounding strings on 50 Cents’ “Candy Shop” that caught her ear. “That little piece was just perfect for the song,” she said. “And 50 Cent was really cool about it so I was very happy that it all worked out. If I found another little snippet of a song that I felt would work, I might do that again. But it’s not something I look to do.”

This willingness to try new things led her to become the first professional musician to perform as an avatar in the digital world of Second Life. “That was good fun, said Vega. “I like playing with new technology and seeing how it can bring people together.” Additionally, Vega is currently revising a play about the life and work of Southern Gothic writer, Carson McCullers. She’s been writing the music with Duncan Sheik and hopes to release an album next year. And while she doesn’t intend to direct, Vega will play the role of McCullers in this one-woman play.

Thirty years after the release of her self-titled debut, Vega continues to produce music that connects with every demographic. Often classified as neo-folk, she is influenced by a range of different styles—including hip-hop, rock, Top 40 and classical. She attributes the timelessness of her catalogue to her wide range of tastes. “I don’t really go for trends,” said Vega. “The things that I love are timeless so I guess when I write, it must come from a similar place. At least that’s what I would hope.”