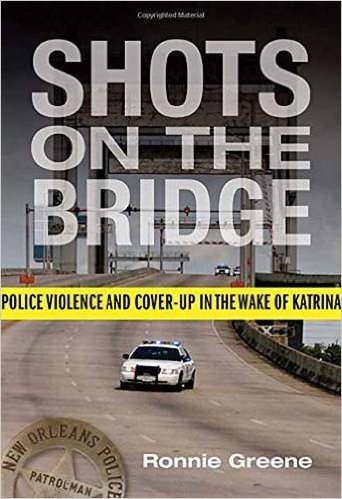 Two words that make you want to do the opposite, causing you to question everything that’s said. “Trust me” makes you squirm. “Trust me” makes you itch, even though there are times when there’s no other choice. And in the new book Shots on the Bridge by Ronnie Greene, you’ll read about assumed trust that was broken in a most devastating way.

On the morning of August 29, 2005, almost an hour after Hurricane Katrina hit land, a levee broke and water poured into New Orleans. Many people, heeding their mayor’s pleas, fled the city before Katrina arrived but an estimated 100,000 didn’t – including police, who became “prisoners of the hurricane’s wake.” Also stranded: one-time NFL player Lance Madison and his mentally disabled brother, Ronald; and 17-year-old JJ Brissette, his friend Jose Holmes Jr., Jose’s aunt Susan Bartholomew, her family, and extended family.

Six days post-hurricane, after waiting for rescue that never came, enduring the heat, the stench, and a lack of food, the families, on opposite sides of the Danziger Bridge and unbeknownst to each other, set out to find help on their own.

The trouble, at its very core, began with shots fired on the Danziger Bridge by unknown miscreants who fled quickly. In later months, Detective Jennifer Dupree would avow that she never said “Officer down” when she reported those shots. Yes, she’d radioed for help, but not with those words; still, at their makeshift headquarters, officers readying for duty heard Dupree’s call for assistance. Eleven of them, both black and white, jumped in a truck and raced to the bridge.

Arriving at the bridge, police began shooting before they even understood who they were shooting at. Whether or not they knew that the African American civilians they shot were unarmed is still debated but when the gunfire stopped, two people were dead and many injured in what Greene says “was about the worst abuse of police power… ever seen.”

I struggled for a long time over what to say about this book. For sure, you’ll spend a lot of time picking your jaw up off the floor while you’re reading Shots on the Bridge. But on the other hand, there’s a lot to follow, and that makes it a bit hard to read.

I can’t use the verb “enjoy” here, either, because what’s to enjoy about what happened?

You may appreciate the courtroom drama, or the investigative techniques it took to see how the cover-up evolved, but that seems secondary to what author Ronnie Greene reports – even though it comprises most of the book. And yet – to get there, you have to read that astounding first half.

Some of the outcome you’ll see will satisfy you, but I’m guessing you likely won’t be happy at the end of this squirmy book. Still, I believe that Shots on the Bridge is overall worth a try on this 10th anniversary of the event – if nothing but because you can trust that it’ll make you think.