Brazil may gain worldwide attention for Rio de Janeiro’s extravagant Carnaval that takes place each February, but that’s far from the only arty party in this vivacious travel destination. On the contrary, Rio is one of the most art-sophisticated cities in the world. Beyond the city’s more obvious abundance of bunda (derrière) and dança (dancing) seen on its famous beaches are a number of excellent museums, events and festivals.

Though the city basks in its reputation as a sensual destination where beautiful bodies are the main attraction, Rio’s clean little secret is that its numerous cultural centers and art spaces are frequented by a worldly resident population. Away from the sybaritic appeal of Copacabana, Ipanema and Leblon, Rio’s Centro, the city center long avoided by visitors as a no-go zone, is in the midst of a facelift. 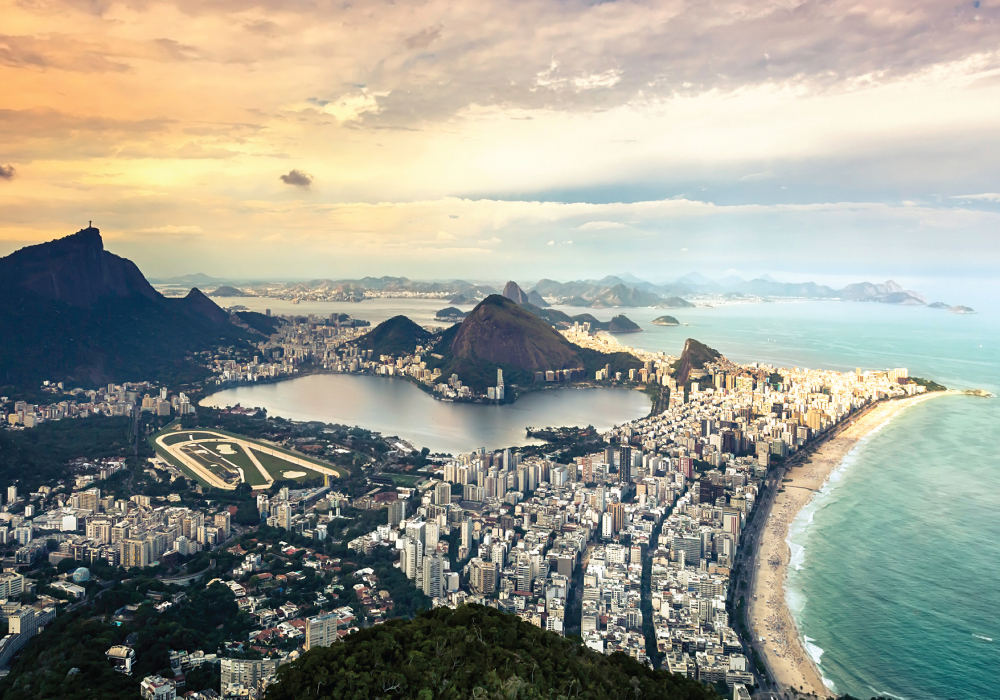 There, the city’s cultural patrimony occupies one historic building after another in the large downtown area that was the center of commerce during Rio’s reign as the capital of the Portuguese Empire from 1808 to 1822 and later as Brazil’s national capital from 1822 until 1960.

The relocation of the federal government to the purpose-built city of Brasília was a blow to Rio’s collective ego, but 50 years on the city seems to be recovering and is assuming a new, serious attitude on the world stage. This is no doubt due in part to Rio de Janeiro being selected as the host city for the 2016 Summer Olympics, the first city in South America to be accorded that honor.

The Centro is a treasure trove for architecture buffs, reflecting the history of European Brazil through the various styles of buildings seen around town. Not to be missed is the Mosteiro de São Bento, where a jewel box of a church serves as the focal point of the monastery complex atop a hill on the north side of the city.

Though the compendium of architecture includes various Belle Époque, Art Deco and PostModern masterpieces, Brazilian Baroque remains the country’s most impressive building style and the monastery takes it to its apogee. The Theatro Municipal is the pride of the city as the venue for concerts and ballet performances. Modeled on the Opéra Palais Garnier in Paris, this lookalike South American cousin surrounds its patrons with the same ornate decor as its continental counterpart and attracts a similarly outstanding roster of talent. 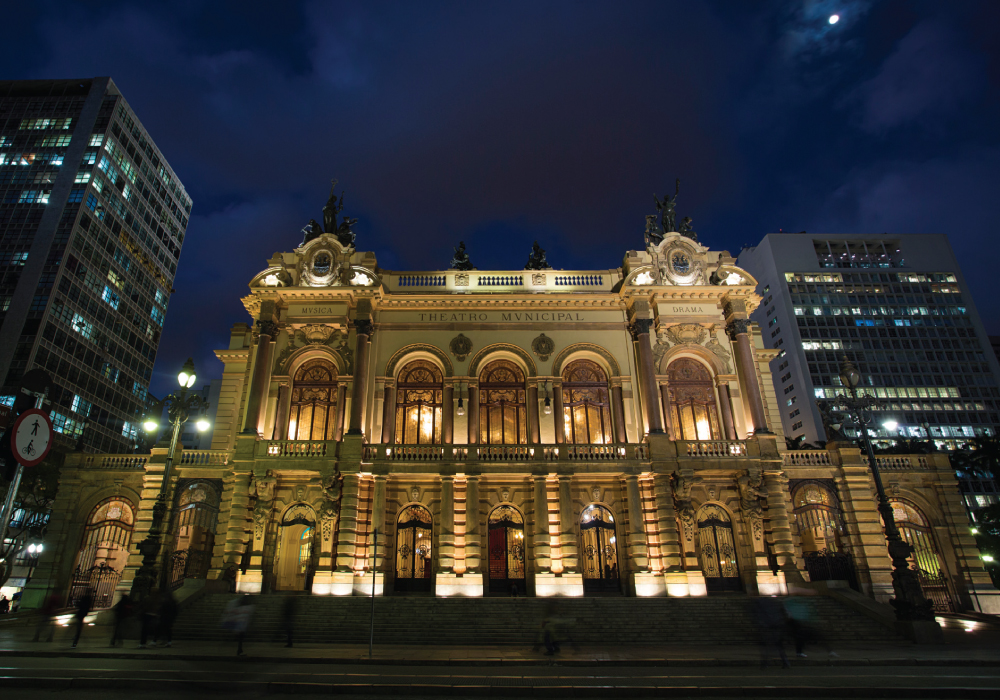 Among the many smaller cultural gems around Rio is the Instituto Moreira Salles. The former home of a wealthy banker (and father of fi lm director Walther Salles) is now a showcase for temporary art exhibits presented amidst beautiful gardens in the city’s Gávea district near Ipanema and the Lagoa, two of Rio’s most coveted residential areas. Just on the northern edge of the Lagoa near Rio’s beautiful Botanical Garden is the outstanding restaurant Roberta Sudbrack. The house-turned culinary-temple is owned by chef Roberta Sudbrack, who was the personal chef for former Brazilian president Fernando Henrique Cardoso.

Brazil’s largest city has long languished in the shadow of Rio de Janeiro with regard to visitor popularity, but the local paulistanos go about their business confident in the knowledge that their home is the engine that drives the seventh-largest economy in the world. As a ride down Jardim América’s Rua Colômbia reveals, there are not many neighborhoods in the world that can boast Aston Martin, Bentley and Lamborghini showrooms on the same block. 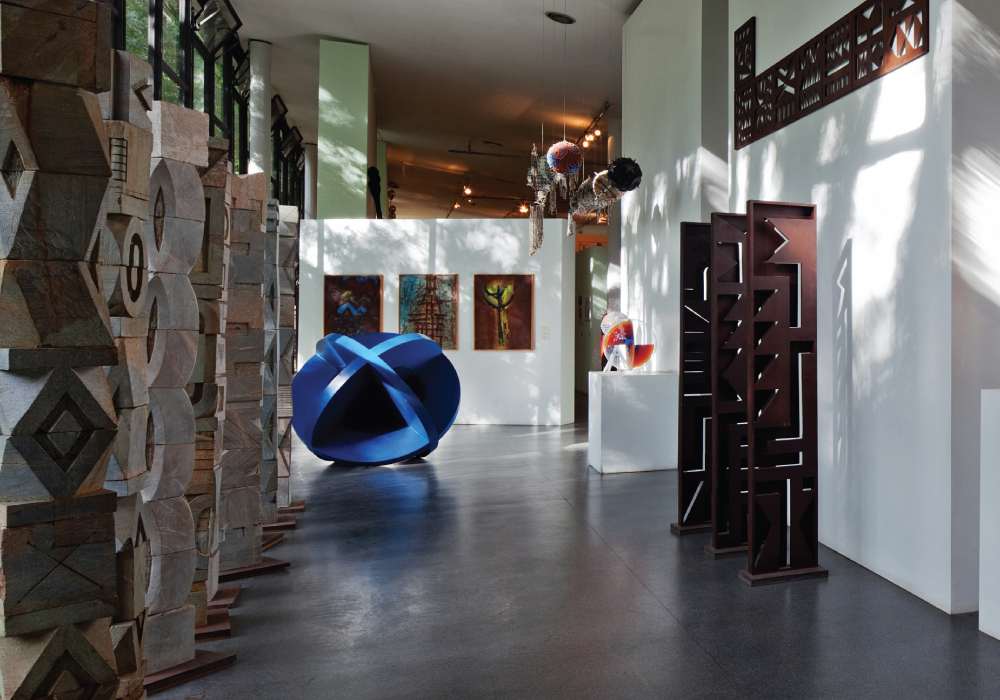 Compared to Rio’s lush surroundings, São Paulo is better known as a jungle of skyscrapers. The surprise is that São Paulo too, has a good amount of greenery in the city, the most obvious of which is the enormous Parque do Ibirapuera. Often called the Central Park of São Paulo, Ibirapuera simulates its New York counterpart in that it is a well-used outdoor space bordered by wealthy residential areas. The walking, jogging and cycling tracks are very popular, especially on weekends, as are the museums and cultural spaces located within the park. 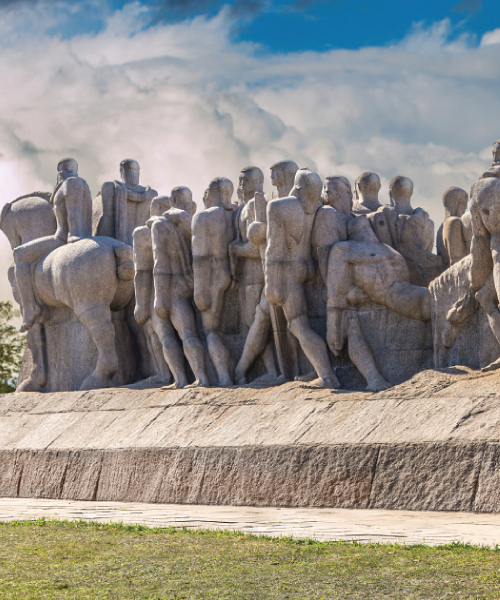 Foremost among the latter is the Museu Afro Brasil, a huge collection of art and artefacts related to Brazil’s rich African heritage. The museum’s exhibits are housed on one of several enormous pavilions designed by Brazil’s celebrated modernist architect, Oscar Niemeyer, who designed the entire park. Another of these pavilions is home to the São Paulo Bienal. The biannual event (taking place in odd years) is one of the most respected art shows in the world. Keeping these two structures company are the domed OCA building and the equally rotund planetarium almost lost in a jungle of vegetation. The striking Auditório de São Paulo, a state-of-the-art venue for musical performances, completes the portfolio of landmark structures in the park.

Maintaining the New York metaphor is Avenida Paulista, São Paulo’s Fifth Avenue, where the outstanding art collection at MASP (pronounced MAH-spee) is not to be missed. Room after room of familiar signatures from Van Gogh to Renoir fill the impressive building which hangs suspended over a large esplanade that hosts an antiques market every Sunday. MASP is particularly strong in Flemish and French paintings, yet among the countless billions of dollars’ worth of European art are the works of Brazilian masters such as Portinari and Di Cavalcanti, just as famous in their own country but virtually unknown elsewhere. Down the avenue, on the ground floor of a landmark pyramid building, is the Livraria Cultura, a bookshop and cultural hub with theatrical performances and art exhibits found among the thousands of beautiful books for sale.

Like Rio, São Paulo’s downtown area is also enjoying revitalization. Among the impressive museums in this most cultured of cities is the Pinacoteca do Estado, a fortress of a place across the street from the recently renovated Luz train station. The latter houses the Museum of the Portuguese Language in addition to continuing to hold down its day job as a transit point for thousands of commuters. If MASP keeps a focus on the classics, then Pinacoteca shines light on modern art displayed in a less formal environment.

Near the Pinacoteca do Estado and Luz is Estação Júlio Prestes, another restored train station now home to the Sala São Paulo, recognized by classical music aficionados as one of the most acoustically perfect concert halls in the world. Next to Estação Júlio Prestes is Estação da Pinacoteca, a satellite location of the Pinacoteca that is home to the Resistance Museum reminding Brazilians of the country’s dark period under military dictatorship, which ended in 1985.

Salvador is known as the soul of Brazil, especially famous as the center of the country’s rich African heritage. Music and dance are foremost expressions of this cultural reverence; performances take place almost nightly. The venerable Balé Folclórico da Bahia performs in its own theater in the Pelourinho district. The show is a clever presentation of Afro-Brazilian traditions and dance and finishes with a dazzling display of capoeira, the martial art camouflaged as a dance originated by plantation slaves.

Salvador has several interesting museums worth visiting; two of the best showcase African art. The Claudio Massella Collection consists mostly of masks and other carvings. It’s housed in a historic building close to the Jorge Amado Foundation’s displays related to the great Brazilian author and near the Teatro Miguel Santana where the Balé Folclórico da Bahia performs its shows. The staterun Museu AfroBrasileiro is found in a grand building on Terreiro de Jesus Square.

Outside the Pelourinho district, the Museu Carlos Costa Pinto is the former villa of a wealthy family; among the fine furniture and art is an extraordinary collection of balangandans, the decorative charms hung from the belts of female household sta during the colonial era. All visitors to Salvador should head to the remarkable São Francisco church, whose richly gilded interior embodies the apotheosis of Brazilian Baroque architecture.

The grande dame of South American hotels, Copacabana Palace’s refined suites, excellent restaurants and chic atmosphere make it the last word in Rio de Janeiro hotels. Don’t miss a meal at MEE. The staff is immaculately groomed and the food and service are superb.

There are more luxurious hotels in São Paulo, but none of them can top Meliá’s superb location right on Avenida Paulista. In a city notorious for congested traffic, being in the middle of the action puts Meliá’s guests within easy walking distance of MASP, several fine restaurants, and the chic shopping street Rua Oscar Freire.

The chic guesthouse on Largo São Francisco exudes charm and style both in the public rooms and in the bedrooms, each named for a different colony of the former Portuguese Empire. Few people are aware of just how far and wide Portuguese explorers and merchants sailed in the 16th and 17th centuries, but names like Timor, Mozambique, Ceylon and Formosa are apt reminders. One result of this cosmopolitanism is Bahia’s unique cuisine, a style of cooking rarely served at restaurants in other countries—the specialized ingredients such as oil of dendê are not easily found in other parts of Brazil, let alone other parts of the world.