There’s been plenty of buzz about the Whitney Museum. Much has been said about its clean lines, breathy space, spectacular views and ideal location at the foot of The High Line in the Meatpacking District. And all of this is worth raving about. But now it’s time to talk about the work inside those big, white walls.

The Whitney’s inaugural exhibit, America is Hard to See, takes a fresh look at American art in the 20th century. The most well-known (and many lesser known, but no less talented) painters, sculptors and photographers are gracefully organized from floors five through eight to create a fluid and seamless curatorial experience. One way to fully embracing the floor-by-floor chronological layout of the exhibit is to take the stairs: they feature floor-to-ceiling glass windows that allow for stunning vistas of the Hudson River.

Each floor houses a particular time period, displaying art that has been selected from the museum’s holdings of more than 22,000 works created by more than 3,000 artists, including:

8th Floor: 1910 to 1940
During this period, with the advent of modernization and experimentation, art in America began to shift from form to formless. Stanton Macdonald-Wright’s “Oriental— Synchromy in Blue-Green” (1918) is a fine example of this aesthetic limbo. It’s a warm study in cool abstraction. Swirls of primary colors blended into more subtle hues come forward from stricter lines and shapes embedded deeper in the canvas. It reads like an actual metamorphosis from hard reality to soft metaphysics and exemplifies the changes in American art at this time.

Several steps further down the path to abstraction are the soft musings of Georgia O’Keefe. Her sensual “Music, Pink and Blue No. 2” (1918), is a landmark in artistic language. Hues of blue and pink softly meld into one another in a desert flower dream, creating a sense of organic harmony that defines her deserved status as one of America’s best painters. 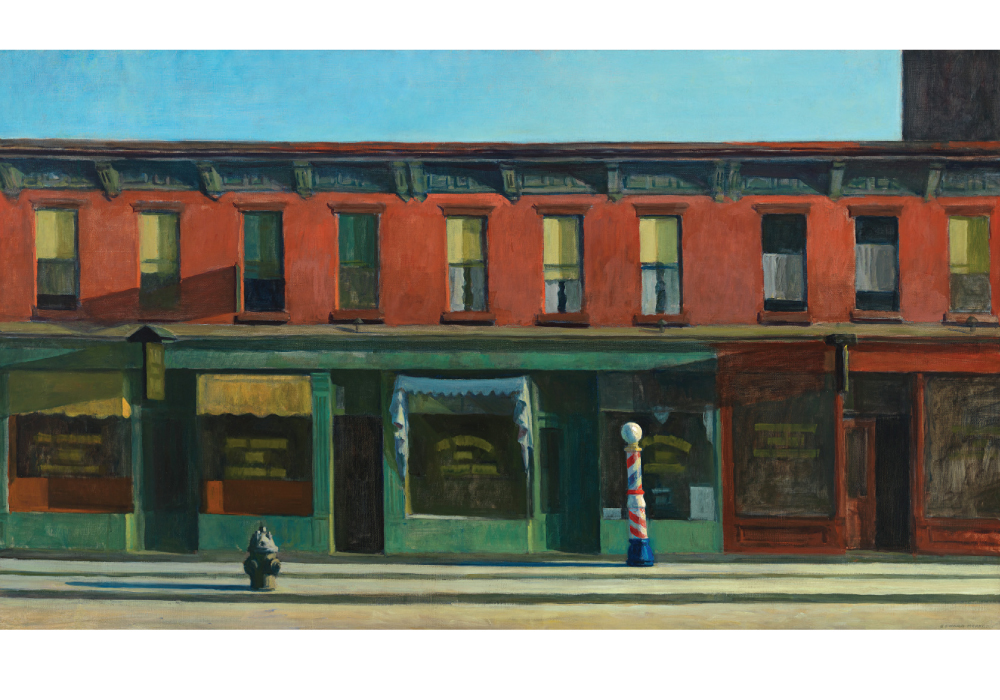 7th Floor: 1925 to 1960
By the middle of the century, after the Great Depression and two World Wars, any hint of experimentation from the 20s had grown into full-blown artistic chaos. It was all too much for the body politic to bear, and the work of American artists exploded in every conceivable direction. Surrealism and abstraction had fi rmly taken hold and renowned artists like Jackson Pollock, Willem de Kooning and Robert Rauschenberg were pushing these ideas into unknown realms. But in the spirit of true American rebellion, there was a reaction—a movement that retreated towards more traditional forms and interpretations of the American mythos as well.

Painter Edward Hopper was a master at catching the “quiet American moment.” In “Early Sunday Morning” (1930), Hopper’s use of muted coloration and photographic mise-en-scène is a clear evocation of Depression Era sadness as seen on Manhattan’s Seventh Avenue. Hopper makes one of America’s most travelled streets look like Anytown, USA—a sense of universal loneliness arrived at through a very simple, specific and individual vision.

Jackson Pollock’s methods have sometimes been dismissed as simple (“My kid can do that!”), but his results have long been accepted as intricate, exploratory and sophisticated. “Number 27, 1950” (1950) is quintessential Pollock: floor to ceiling splatter and buckshot of bland colors and curved chaos— a manifestation of surrender and spontaneity, an ode to nothing but gravity.

6th Floor: 1950 to 1975
After World War II, industrialization had a firm foothold in America and commercialism on a mass scale followed suit. The art world responded. Absorbing radio and TV, artists started to play on the commodification and relentless advertising that assaulted the American consciousness. This was the birth of the Pop Art movement, where meta and media collided.

Andy Warhol is Pop Art, and “Green Coca Cola Bottles” (1962) is Warhol. Using his trademark sense of repetition as a means of reductio ad absurdum, Warhol created a finely detailed grid of overindulgent consumption. His intelligence lies in using many small things, almost exactly alike, to create one big thing that is both completely overwhelming and totally accessible. It’s a grandiose yet ultimately harmless example of “careful what you wish for…” because Madison Avenue will stuff it down your throat until you choke.

Jasper Johns is more playful and less subversive in using snippets of symbolism for artistic purposes. “Three Flags” (1958) is wonderfully emblematic of Johns’ honesty and whimsy. Three nearly identical versions of the stars and stripes are layered one on top of the next in a 3-D confi guration. There is no irony, no subversion, no political intent—just an innocent expression of patriotism done with flair.

5th Floor: 1965 to Present
This collection of trans-millennial works imbues a sense of longing. Perhaps born of curiosity or a desire to make beauty, or possibly a guttural disillusionment for where America is at and where we might be going, this bilious approach may be justified. Of the works on display from this period, Jean-Michel Basquiat’s seem particularly redemptive. Basquiat might be the godfather of modern day urban angst, but there was a dose of self-deprecation in his disgust that sets his work apart. His expansive acrylic “Hollywood Africans” (1983) is both hellish and humorous. Across broad swatches of harsh yellow paint, Basquiat scrawled his musings, shortcomings, dreams and fears. In all four corners of the canvas, his gift for the gra ti-style chaos gets us thinking and laughing.

SEE IT: The Whitney Museum of American Art is located at 99 Gansevoort Street in lower Manhattan. For information, visit whitney.org