“Sport” trucks and SUVs have historically been a hit-and miss segment in the automotive world. From Ford’s SVT F-150 lightning that was hardly usable as a pickup, to Jeep’s first generation center exhaust SRT8 that couldn’t tow so much as a rowboat, it seems no manufacturer has been able to check all the boxes. Until now. First announced at last year’s Pebble Beach Concours, Land Rover’s Range Rover Sport SVR is the premier production model from Jaguar Land Rover’s new Special Vehicle Operations (SVO) unit—a division created for the co-brands to run with the AMGs and Ms of the universe. This will be the first Land Rover to don the SVR badging and the most powerful ever built.

Outfitted with the same 5.0-liter, supercharged V8 as the F-Type R, the truck boasts a highly tuned and engineered “active exhaust.” When in Dynamic Mode, it’s similar to its cousin F-Type: it howls, growls and cackles like a hard-driven Italian toy. But unlike the exotics it emulates, one can successfully argue its practicality.

The SVR’s race trim takes away nothing from everyday versatility. Dimensions are identical to the standard Range Rover Sport, already a proven people and cargo mover. A true utility vehicle, it plays both the role of countryman and city-dweller in nonchalant fashion. Whether its driver is decked out in fine Italian wool or worn flannel, it looks and acts the part. It even wears mud and dirt like it’s the cool thing to do. Now it fits right in at the track as well. 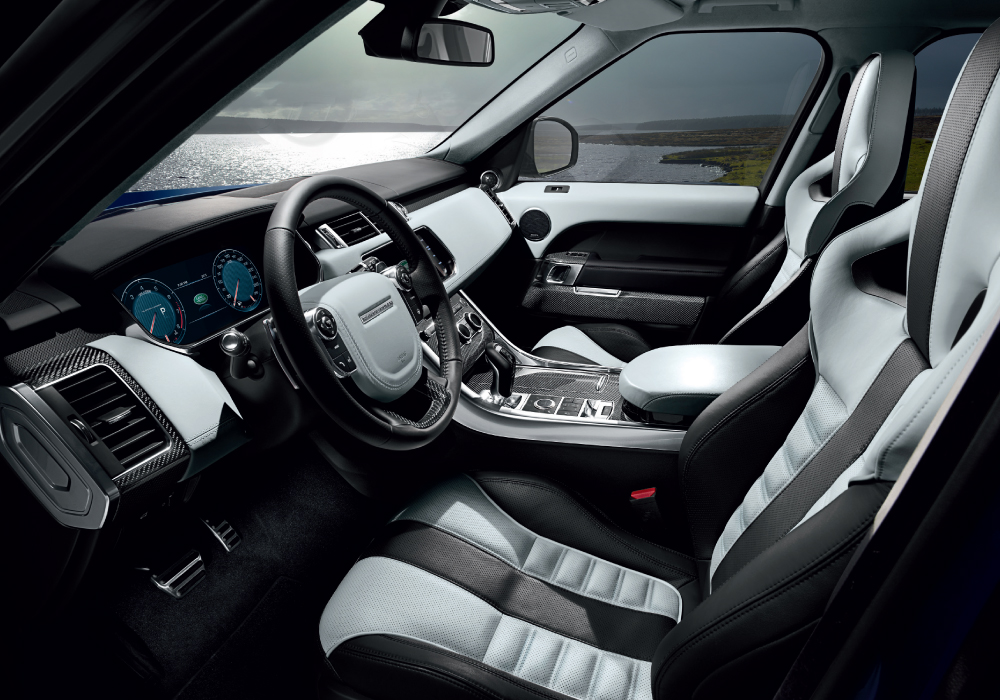 This elite sport SUV is born and bred from Jaguar Land Rover’s Special Vehicle Operations Unit and lives up to the quasi-military sounding pedigree. It’s the vehicular version of a spy pen that can make a call, take pictures, record video, forge a passport and translate foreign languages.

Cracking open the driver-side door of the SVR, my eye was met by a gleam of the brightest white seat piping I’d ever seen. Closer inspection revealed that the ambiance was delivered by 3M reflective trim—icing on top of race-style bucket seats one would expect to see in a Hellcat or Shelby. Yet save for a few extra buttons and badges, the remainder of the cabin is nearly identical to that of a standard Range Rover Sport—not a bad thing, considering the truck’s ability to chauffeur in style then fold its seats nearly flush and haul gear over any terrain. Interior design aside, after urging the V8 awake via push-button start, the similarities to the non-SVR Range ended.

At a leisurely, around-town stroll, the SVR’s 550 horses and 502 lb-ft of torque are perfectly manageable and gentlemanly. But it only takes a misplaced prod of the throttle to realize the reins can quickly be cut loose. Opening the engine on a clear ribbon of dry, beachfront highway, I pictured straggling surfers scanning the coastline for an oncoming cigarette boat; its sound is that delightfully out of character for a large SUV. Up-shifting via paddle is akin to shots fired from a silenced and suppressed pistol—quick, muted and with just enough pushback to let you know the job has been done. It’s on deceleration where all hell breaks loose.

When the truck’s active exhaust is engaged, a combination of bypass valves and late fuel delivery crash together like two storm fronts, emitting a cacophony that is nothing short of divine for driving enthusiasts. Hypermiling will be the absolute last thing on any driver’s mind, as the sounds are a perfect justification for depleting fuel prematurely. Quickly having proved itself as a straight-line monster, I threw the truck’s heft into a curve and was pleasantly surprised by the ease in which it pulled through. It may not be quite an F-Type in this respect, but it certainly doesn’t behave like 5,000+ lbs of vehicle either.

In terms of of off -road capabilities, the SVR is no less a Range Rover than anything else in Land Rover’s lineup. Equipped with the same all-terrain systems and tuning as its brethren, it powered through sand and rock scrambles with ease and should be a formidable fighter for the next polar vortices. The benchmark for the high-performance SUV has finally been established, it’s going to take quite a bit of skilled maneuvering to conquer it.