Temporary art installations are supposed to capture attention. Briefly. But every once in a while one comes along that makes you stop and wonder. The Billion Oyster Pavilion on Governors Island is that installation of the summer.

From a few hundred yards away it draws people in. The woven canopy feels like the tree line of an enchanted forest. It’s actually made of steel, rebar, nylon rope and hose clamps set on concrete blocks, but it looks and feels magical. Once drawn to the installation, it’s hard not to be struck at the way the city’s past, present, future, dreams, art and sustainability seem to collide. It becomes an opportunity to learn about the important and innovative work that is happening just a few yards away to help restore New York City’s waterways. Like all temporary installations, though, the Billion Oyster Pavilion will be forgotten by summer’s end but its work will be far from over.

The pavilion was one of the winning entries in FIGMENT, the Emerging New York Architects Committee (ENYA) of the American Institute of Architects New York Chapter (AIANY), and the Structural Engineers Association of New York (SEAoNY) Fifth annual City of Dreams Pavilion Competition which asks design teams to submit ideas for temporary gathering places for people to meet and learn about the arts. It’s on display until Sept. 22, when its parts will become a new habitat for oysters in New York City’s harbor.

“One of the things that the competition brief asked for was an approach to sustainability,” Henry Grosman of the BanG design team of Grosman and Babak Bryan said. “We’ve seen a lot of projects that call themselves sustainable because they recycle materials. But then what happens after you take down the pavilion and you’re now just throwing out or recycling those materials?  We wondered if we could do better. We had seen people from the Billion Oyster Project out on the Island, so we started looking into what they do. We realized that a lot of their work is really experimental and really cool. So, we started from the idea that we wanted our project to be able to be used by them to do their work at the end of its life as a pavilion. It was a really useful constraint that lead us in some new directions.” 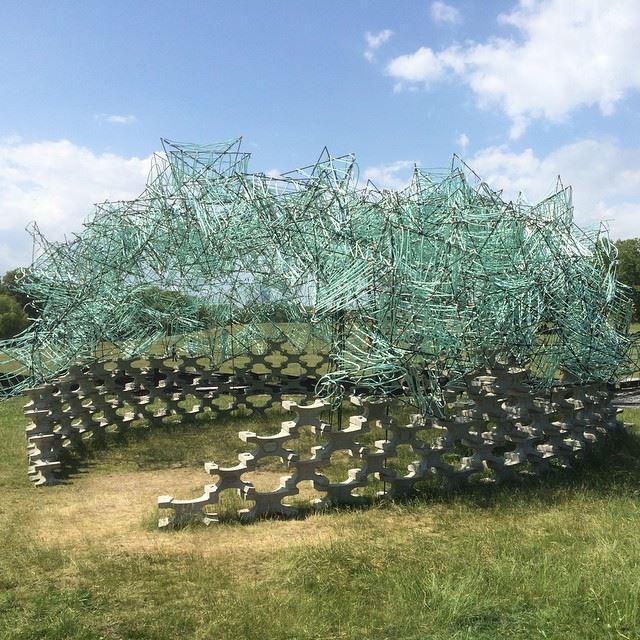 The Billion Oyster Pavilion will be forgotten but not gone before you know it. image: bang studio

Grosman and Bryan brought their idea to the Billion Oyster Project, which is trying to restore 1 billion oysters to New York Harbor. Representatives of the Billion Oyster Project explained the work and their technical requirements to Grosman and Bryan who then reworked parts of the design to ensure that once the summer is over the pavilion would continue to be useful.

“It ended up making the project so much better,” Grosman said. 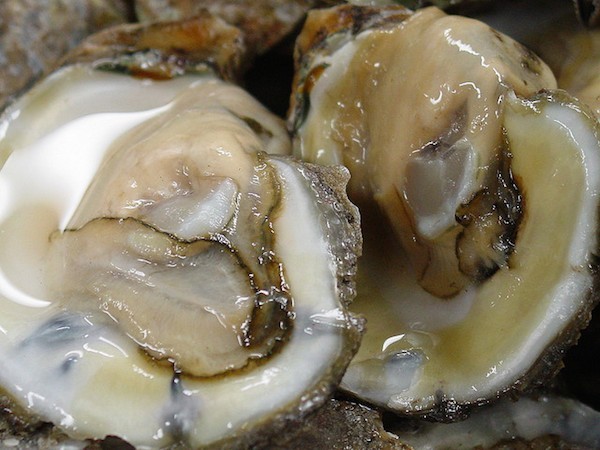 At the end of summer, parts from the Billion Oyster Pavilion will be used to create homes for oysters in the New York Harbor

The Billion Oyster Pavilion only used materials that the Billion Oyster Project can use to build reefs based on technology the organization already has. Oyster spat, or baby oysters, will cover the concrete, which will then go directly into the water. Grosman and Bryan chose the rebar triangles because they are the basic building modules for Oyster Condos: metal cages filled with recycled oyster shells covered in oyster spat and placed in the water. The marine line rope that weaves through the canopy is basically duct tape for boat people. The Billion Oyster Project will be able to put it to many different uses.

After they knew what material to use, the building process proved just as challenging, mainly because of the short amount of time Grosman and Bryan had to create and then move all of the parts to Governor’s Island. Just think about casting 175 concrete blocks, assembling and weaving more than 150 modules of four rebar triangles and then moving all the parts to the Island and assembling. 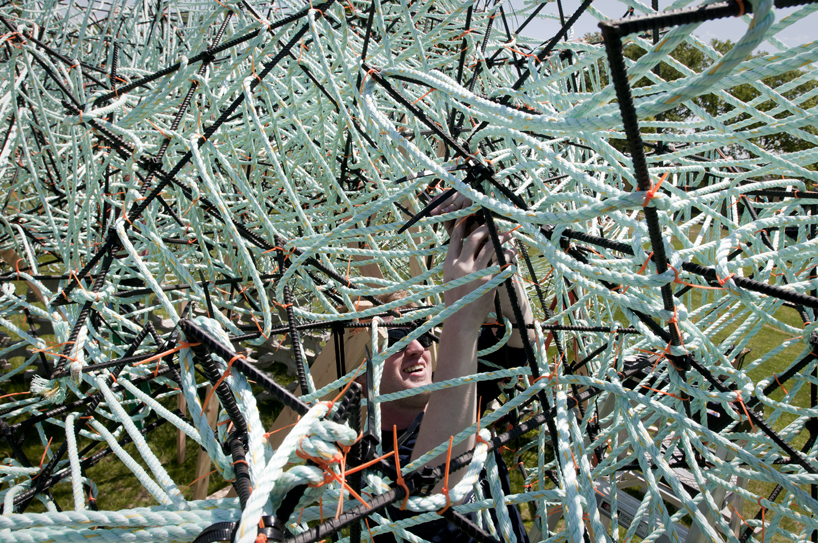 The woven canopy is made of steel, rebar, nylon rope and hose clamps set on concrete blocks. image: bang studio

“The biggest challenge here was that the structure is highly distributed and redundant. It gets its strength only when all of the parts are in place,” Grosman said.

Now that it’s done, Grosman and Bryan are taking some time to digest everything they learned and watch as others stop and stare at their work and learn all about the effort to bring a billion oysters back to New York Harbor.

“It’s really fun to see people hanging out in the project, and it’s even better when they read the sign that explains how it’s going to be re-used to make oyster habitat,” Grosman said.