There’s a sort of peacefulness involved in watching concerts at relatively small venues, especially when the performing artist believes that what “makes music so special is…[the thing] that makes us human.”

The sense of calm and trust deepens when that same artist proclaims that he’d sell “his voice [to the devil] for more soul” (and that voice, let me tell you, is more valuable than some thousand human souls I’ve met in the past).

But the most interesting thing about ex The Voice contestant (team Pharrell!) Luke Wade is his take on the current state of the music industry, a view that is almost entirely at odds (and not in the ways that you’d expect) with the perspective of those currently benefiting most by the industry.

I chatted with singer/songwriter before he took the stage at New York’s City Winery and we had a healthy debate about the changing face of music, what inspires him and, of course, life since The Voice.

Long Island Pulse: Tell us about life after The Voice. What have you been up to?
Luke Wade: I’ve toured more than 90 cities since the beginning of the year and have been recording and writing. I have written 30 plus songs. What else? Figuring out the dos and don’ts the hard way.

Pulse: You were a full-time musician before you auditioned for the show. How has your career changed since The Voice?
LW: It’s another level because you do have fans and so you can go and play in other cities and people will show up. Until about the middle of April, it was very Voice-y and then the TV bubble burst very quickly, because Season 8 came in February.

Pulse: Fans move on to the next one.
LW: They move on to the next one because, to the majority of people, if you’re on the show, you are a television personality. You’re not an artist. You’re someone who did a really good job on TV connecting to people singing someone else’s song. People are like, ‘I want to meet the guy who did that in front of me and my kids loved [him] and maybe I saw my sister really love and cry when he did this one song.’ That’s kind of like the bread and butter of that Voice universe. Then that fades.

I was very fortunate to have two albums before The Voice and so there was a number of fans and people who had made the transition over to that and so starting in April those were the people that were left. This last month has been really spectacular in that I really didn’t know where the bottom was: I was falling, falling, falling and then it started turning back around and this, where I’m at now, it’s made of the hard work that I did after the show. 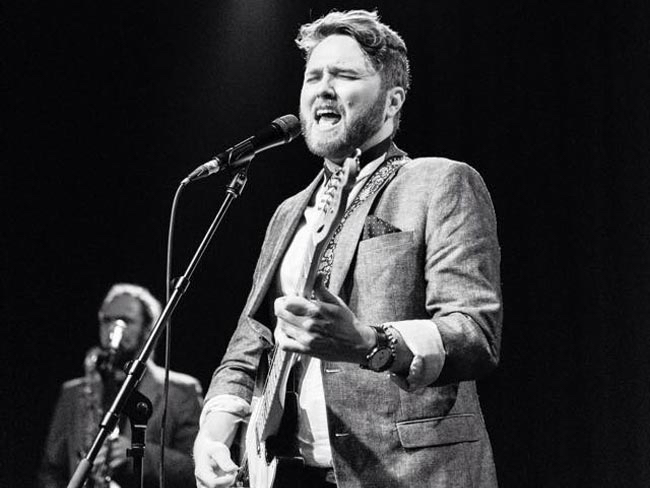 Pulse: This concept of TV personality versus musician is interesting. You have this great voice and wanted people to hear it but the way for that to happen was to develop and cater to this new “character.”
LK: I don’t really think you need to cater to [it], it fades so quickly. You get what you get out of it and then the rest kind of falls and fades away.

Pulse: And, hopefully, your core remains intact.
LK: That’s a must, really. It really depends on your ambition level. For me, I fully intended on taking what I got from the show and transitioning into something even bigger. Which is a very lofty goal and I’m realizing [that] it’s really not possible in that direct of a sense. What I mean by that is that TV people, for the most part, are not music people. Just converting all of them to being my fans and then taking them along on my musical journey is just not a reasonable expectation. But you can create a new foundation for yourself to eventually build up to another level that might be, at some point, comparable to something you might have experienced on the show.

Pulse: Let’s talk about your musical influences. Who inspired your albums?
LK: My latest record is pretty eclectic. My first album made sense. It’s a make out record! And that was heavily influenced by John Mayer’s Continuum and I listened to a lot of The Police’s Synchronicity [and] Dave Matthews Band’s Before These Crowded Streets–very dark records.

[For] the next album, I [wanted] to make something that has more appeal and more energy but it didn’t have a lot of artistic focus.

Pulse: It seems like all your work until now has been a step towards a final, soulful singer/songwriter character.
LW: Yeah. And I understand the “sophomore slump” thing because I think people think that they can make something that’s more perfect and then it takes that second perfect record to realize that what made you first record great was just the honesty and the magic.

Pulse: How do you feel about the state of the music industry today? Between the digital world, and what kids listen to, and what ends up winning at the VMAs… Where are we at?
LW: I think that we get very confused and emotional as grownups in the sense that the music we like wasn’t really that much different or better, it’s just [that] we were kids and have that association there so we think that it’s better. I mean, how good of an influence was Nirvana?

Pulse: Would you compare Nirvana to, say, Nicki Minaj?
LW: I mean she’s trash talking, potty mouth and ass shaking but she definitely loves herself too much to end it in front of people.

To us, our generation, it was really sad: a man lost before his time but, you know, he was going down a dark path. Then you look at the hippie generation of Bob Dylan. They were kind of pot-smoking, rambling folks and glorifying a different kind of lifestyle.

My personal preference is free love over consumerism, [but that’s really] because the only way to monetize music is by selling something that’s not music. In country music, the reason why a country song is not breaking in the Top 40 but it’s extremely profitable is because they have transparent marketing. They sell hats, cars, beers and they’ve got the consumers of that kind of music so used to being sold things transparently that they’ve created an erroneous dream and a way to support themselves outside of track sales that are not existing.

The reason why Kanye [West] and all these crazy outlandish characters [are so out there is because] at the core of that is publicity and PR. The money is not in any particular kind of creative medium or product. It’s in celebrity. If you create a media frenzy around yourself and you enhance your celebrity, then that’s really where your revenue is coming.

Pulse: Would you go in that direction? Sell your soul for the music?
LW: I mean, it’s not about selling your soul. Look at Dave Grohl. He’s huge and, in a world of noise and crazy publicity stunts, being a real human being is one of the craziest publicity stunts that you can pull off. If you can get there with your soul intact and you can show people that? It’s just as crazy as calling someone names on live TV.