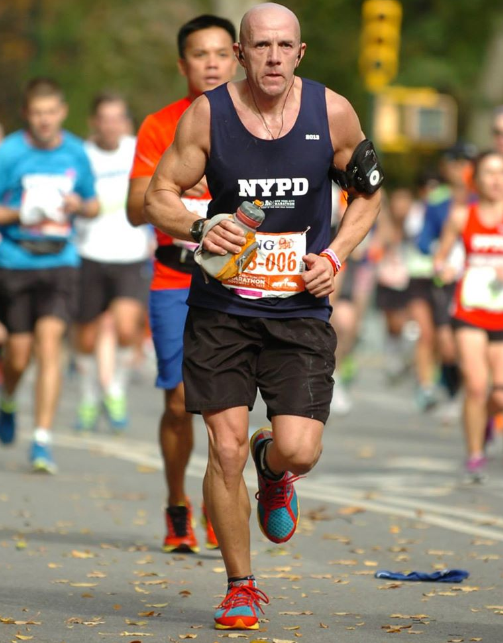 Rob Festa will lead a group of 9/11 first responders at the inaugural Suffolk County Marathon.

Rob Festa of Lindenhurst will run the Suffolk County Marathon Sept. 13. Fourteen years and two days prior, he was helping to evacuate people from the World Trade Center on September 11.

To many Americans, Festa is a hero. Festa, who said he and his fellow NYPD officers were basically on “auto-pilot” that entire day and during the months of recovery that followed, can take the compliment in stride, but he has more admiration for the men and women who went overseas in the nearly decade and a half that followed and came back with their lives forever changed.

“What I also find inspiring is these people who are injured, the military personnel who run races,” Festa said. “Seeing a guy in a wheelchair doing the 26 miles or running with a prosthetic, I draw my inspiration from them.”

So Festa and Long Island 9/11 Veterans, a group of mostly cops and September 11 first responders, will run the marathon that benefits local veterans as one. They’ll stick together regardless of pace. If you’re along the course, you’ll spot them carrying a 120-pound dummy dressed in military fatigues to symbolize the military’s mantra of no person left behind and an 80-pound backpack to raise awareness for PTSD. It’s a heavy weight to carry, but to Festa and his running mates, it’s nothing compared to what the veterans must face when they come home.

“Everybody says they’re heroes when they’re over there but after that when they return, 22 veterans a day take their own life because of PTSD,” Festa said. “We wanted to raise awareness to that, especially here on Long Island.”

And really, it’s the least they felt they could do for the men and women who have donned the uniform.

“We owe these men and women everything,” Festa said. “We get to run these races because of them.”

Just two days after the 14th anniversary of September 11, a day that inspired many to enlist in the military and a day Festa said still seems surreal to him, there’s something special about showing strength in numbers.

“Just to be able to get out there and do it for people who can’t and people we know who died that day and more importantly for people who have become sick shows our strength and the resilience and I think it’s symbolic of our nation in general,” he said.