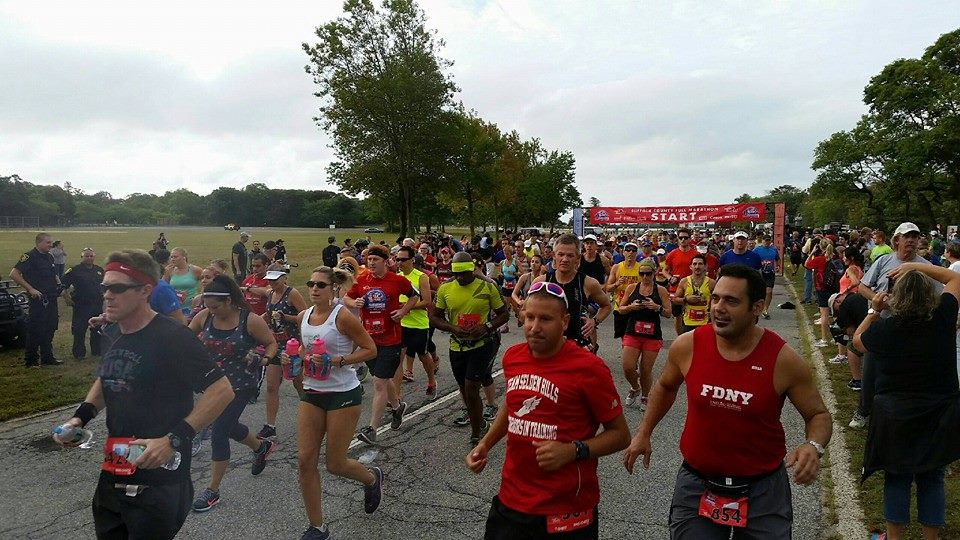 Forecasts of rain didn’t deter nearly 1,000 marathoners and 2,600 half-marathoners from coming to Heckscher State Park for the first-ever Suffolk County Marathon and Half Marathon to Support our Veterans Sunday, Sept. 13.

A pair of runners with local ties crossed first in the men’s and women’s half marathons. Patchogue-Medford High School graduate Anthony Famiglietti, 36, won the men’s half marathon in 1:07.35.90, and Babylon resident Pamela O’Sullivan, 27, tallied a time of 1:24:02.15 for top honors in the women’s race.

The event was as much a victory for local veterans, with about $100,000 and counting being raised. All net proceeds from the race went to assisting local veterans, a cause near and dear to the heart of Suffolk County Executive Steve Bellone, who served in the Army from 1992-94. 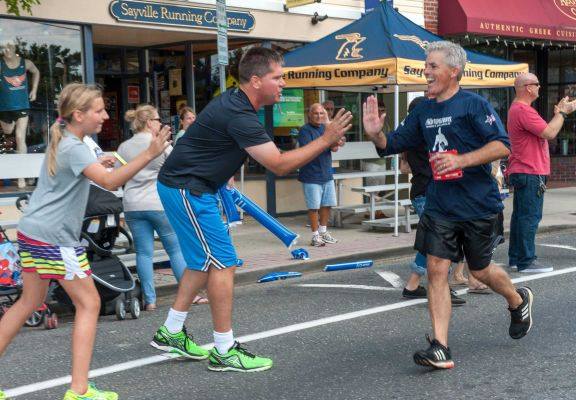 “That’s always been important to me,” Bellone, who ran the marathon in 4:42:51.84, said. “As a public official, I’ve been very involved in raising money for veterans groups like Wounded Warriors and Hope for the Warriors. When we decided to put this event together, almost instantly, I said, ‘if we do it, I’d really like for this to be dedicated to local veterans with 100 percent of the net proceeds going to our local guys, our friends and neighbors who need our help.”

Suffolk County scored as well, bringing runners from more than 30 states and four countries and their families coming to the South Shore. The marathon took athletes from Heckscher State Park to the Patchogue’s Main Street and back again, and the half marathon began and ended at Heckscher State Park with the St. John’s University campus in Oakdale serving as the turnaround. Afterwards, runners were able to enjoy free tastings of everything from brews from Saint James Brewery to Davis Peach Farms produce at Taste of Long Island Festival.

“We’ve brought together our agriculture communities, the wine community, the craft beers,” Bellone said. “All of this amazing stuff that happens right here on Long Island is being showcased.”

With only money left to be counted and impact on the communities to be estimated, it’s time to start looking towards year two, which Bellone expects to be even better.

“I was in the Army, and we were constantly doing after-action reviews of everything you did,” Bellone said. “We’ll of course be doing an after-action review, looking at what worked, what maybe didn’t work and what we can improve upon next year.”

Need inspiration to lace up your running shoes? Leading up to the race, Pulse spoke with Long Islanders running either the Suffolk County Marathon or Half Marathon. Learn about why they signed up and why they run.