The Greek philosopher Pythagoras said, “Number is the substance of all things.” Which is to say, the arts and the sciences are not part of a segregated duality, but rather unified–informing on and inspiring one another–then, now and always.

Under the guidance of SUNY Stony Brook’s Dr. George Hart, interdisciplinary sculptor, mathematician, computer scientist and research professor, Gallery North in Setauket has taken Pythagoras at his word to present The Art of Math. Running until Sept. 25, the exhibit features works inspired by the universe within our universe, consisting of curves, lines and grand designs.

“Artists and mathematicians use the same fundamental vocabulary when describing concepts such as pattern, symmetry, form and precision,” said Fiona Cashell of Gallery North. “Through mathematics we can define objects. However they are devoid of subtlety and spontaneity until the artist brings imagination and a personal vision, transforming the mathematically perfect object into a truly inspired work of art.” 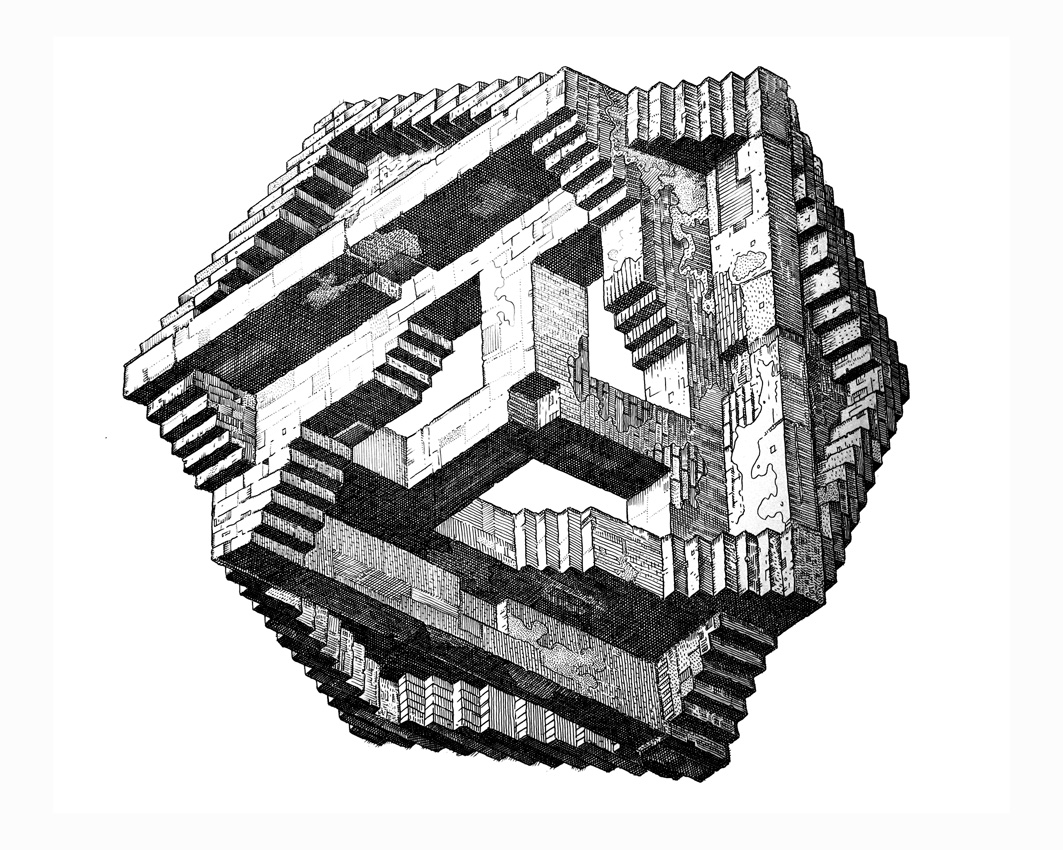 With this type of intellectually creative transference in mind, Gabrielle Meyer’s “Pink Trumpet” brings the four corners of the universe together on the head of a pin, softly warping the already flimsy philosophical duality between curves and lines, Pythagorean Theorem and the Circle Formula. Thick strands of tightly wound yarn–in spring shades of pink, red and white–sit neatly in undulating curves like flower petals. Like the intricate, delicate symmetry found in Lantana or (similar), the sculpture exemplifies science and nature–and art’s unique ability to bridge the two.

Think of Istvan Orosz’s etching, “Wall VI” as the negative reciprocal to Meyer’s work. In stark, yet painfully detailed black and white, Orosz builds a three dimensional floating labyrinth of hard lines, right angles and stepping stones. The overall impression is of some geometric Death Star rotating in space. Formulas for surface area, volume of a cube and area seem to shimmer and fly off the page as the drawing sits suspended in negative space.

Throughout the exhibit, these and other diverse works that include 3D printing, sculpture, painting and drawing highlight a variety of styles and approaches that challenge notions of what we understand math to be, and invite us to consider the mathematical nature of our natural and creative realms.