As the ease of summer gives way to the hustle and bustle of fall, your definition of running around probably doesn’t include sneakers. Between meetings, making dinner and your kid’s geometry homework (remember when you thought you’d never need to recognize an obtuse angle? Maybe this was the moment your teacher was preparing you for…), it’s understandable that all you want to do after a long day is plop down on the couch and turn on the TV.

Do yourself a favor: add an hour of playtime with your kids to your busy schedule. Don’t groan. It’s actually one of the most important things you can do for your child. Studies over the past 10 years predict that, for the first time in recorded history, kids could have a shorter lifespan than their parents. Other stats don’t bring good news either. More than 1 in 5 American children and teens are obese, according to a Center for Disease Control and Prevention report released in August. The apples aren’t falling far from the tree. About one-third of adults are obese. 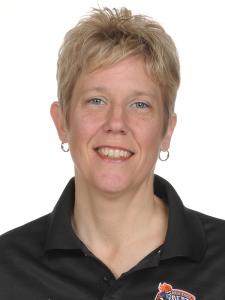 “There are many factors, but our society has progressed with technology, we just don’t move as much,” said Laura Ramus, PT, ATC, Director of Player Performance for the WNBA’s New York Liberty. “Whether it’s our jobs as adults becoming more sedentary or even the activity levels of children because of video games and technology of phones, we just don’t free play like kids of earlier generations did.”

But as a parent, you are empowered to help break that cycle by making good old-fashioned playtime a priority. Rest assured, they’ll actually thank you for this one later.

“It’s important to develop these habits early on in life because it’s easier to continue that than to create new habits later on,” Ramus said.

When your child grows up into a happy, healthy adult, you’ll want to thank Ramus for sharing these eight tips for staying in shape with your kids. 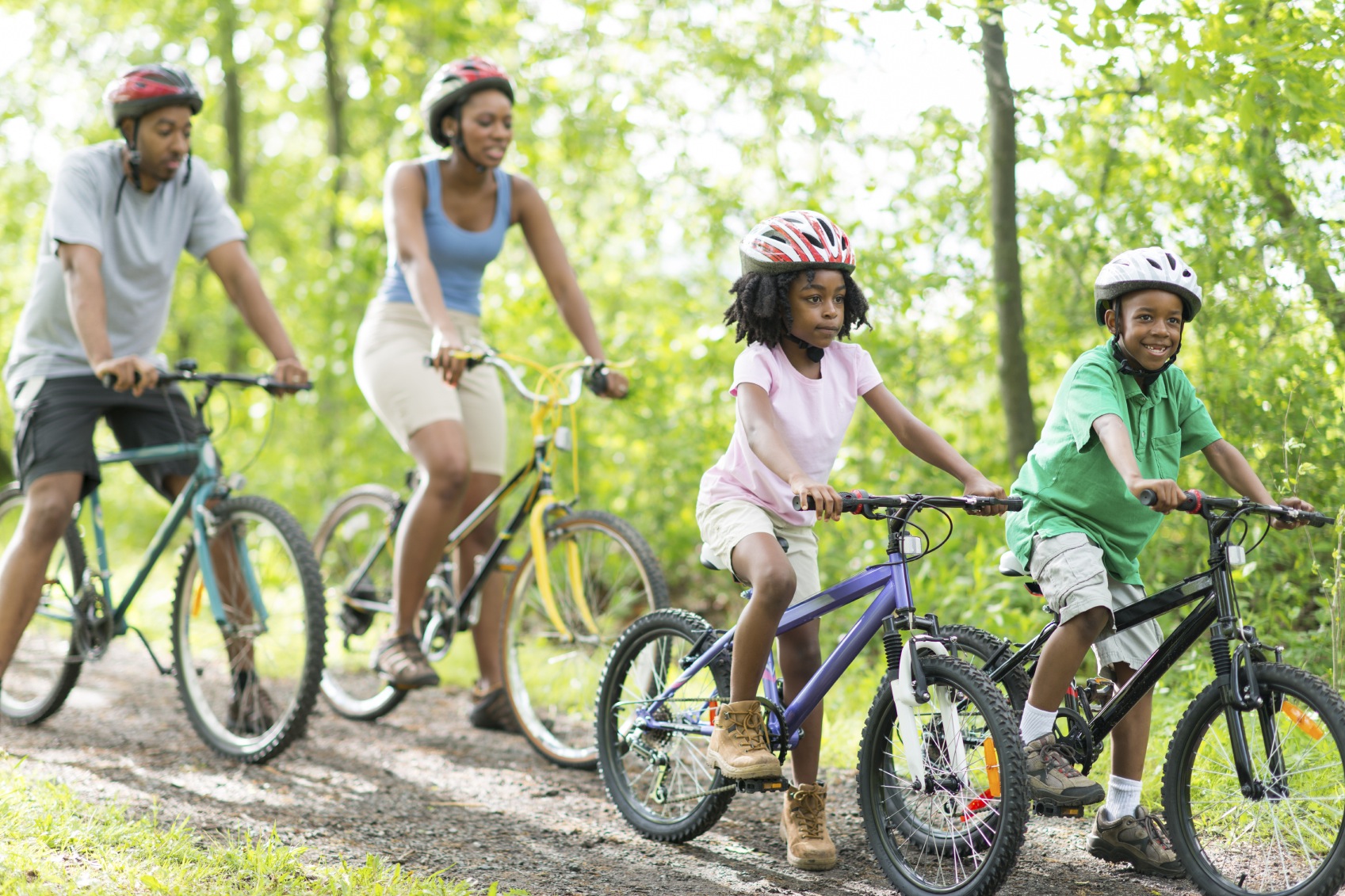 Lecturing your child about how he needs to put down that iPad, get off the couch and get outside isn’t going to cut it if you aren’t walking the walk and living a healthy lifestyle yourself. “Kids mimic, whether it’s activities or language. If a parent can lead by example and have an active lifestyle themselves, the children will be much more likely to do that.” Don’t forego a workout for a marathon football-and-chips binge on a Sunday afternoon. That’s not to say you can’t watch the Jets lose, of course, it’s just a matter of time management which you own during the week. “If you have that choice on a Sunday between sitting on a couch and watching football or going out, maybe you should watch one game and then go out with your kid and throw around a football,” Ramus suggested.

As adults, we’re constantly hearing that we should get 30 minutes of cardio five to six times per week with a few days strength-training and some flexibility work mixed in and a coveted rest day. With children, especially those in the preadolescent stage (about 6-12 years old for girls and 6-14 years old for boys), it’s a little bit less rigid.

“In general, we want our kids moving in activity for 60 minutes seven days a week,” Ramus said. “It should include some time of aerobic, strength and bone strengthening component but not like adults at the gym. The aerobic should make up most of that 60 minutes and it should be moderate to vigorous in intensity.”

How do you grade moderate to vigorous? Ramus recommends using a scale of 0 to 10. Zero is sitting on a couch, 10 is the highest level of intensity your child can physically do. “Where you want to be is a moderate level, 5 or 6, or a little more vigorous, a 7 or 8. At a vigorous level, their heart rate should go up. Their breathing should be challenged much more than if they were simply walking.”

Aerobic exercise is cardio, think running around, playing soccer or basketball. Preadolescents shouldn’t be lifting weights for strength workouts, but should be engaging in activities that challenge them both physically and mentally. “Their brains are really receptive to motor development,” Ramus said. “That’s your window of opportunity for building balance, motor patterns and hand-eye coordination.” Ramus loves activities like getting on jungle gyms, somersaults, leap frogs and especially rock walls. “Yeah, they have to pull themselves up the rock wall, but they have to strategically choose which rocks they get to,” she said. As a child hits adolescence, he or she can begin using weights, just make sure it’s under the direction of a trained professional like a coach or trainer. Talk to your child’s doctor if necessary.

You can barely force yourself to get out for a run around the block every day, so don’t expect your kid to want to do that, either. “I tell parents to keep in mind what their kids like to do, what they like to do and that it has to be fun,” Ramus said. Try throwing around a frisbee, going for a bike ride or taking a nice, brisk walk while your child roller blades (better yet: lace up your own roller blades). Or, forget Instagram and host Throwback Thursday in your own backyard. “Take it back to old school with hopscotch or jump rope. Jumping activities are great because they promote bone health,” Ramus said. The nostalgic feelings will bring on a smile that not even the ugly side of Throwback Thursday, a geometry problem set, can make fade.

For Your Couch Potato 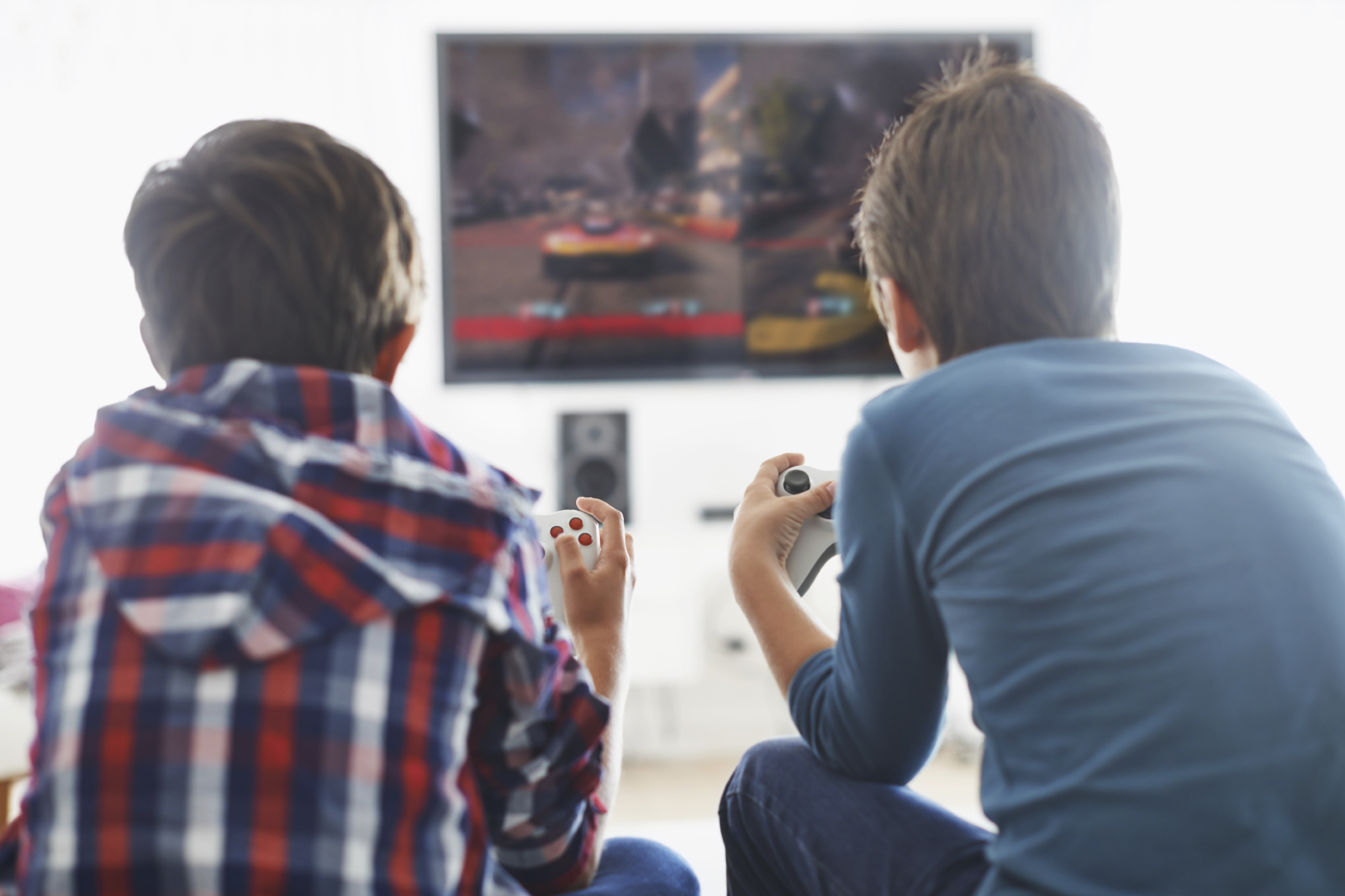 If your child just can’t break away from your flat screen TV, work with her by investing in Wii Fit or Wii Dance. It’ll get her moving and away from simply sitting and staring at a screen. “Some of those dance programs are pretty challenging and great for motor patterns because you have to mimic what they’re doing,” Ramus said.

Yes, you want the activities to be fun, but here’s some good news for oh-so-busy parents with way too many things to do: some chores can be a part of the 60 minutes of exercise. “Ask your son or daughter to help mow the lawn, sweep or mop or with the yard work. Those things can be part of the activity and healthy lifestyle,” Ramus said. Multitasking is awesome, isn’t it? 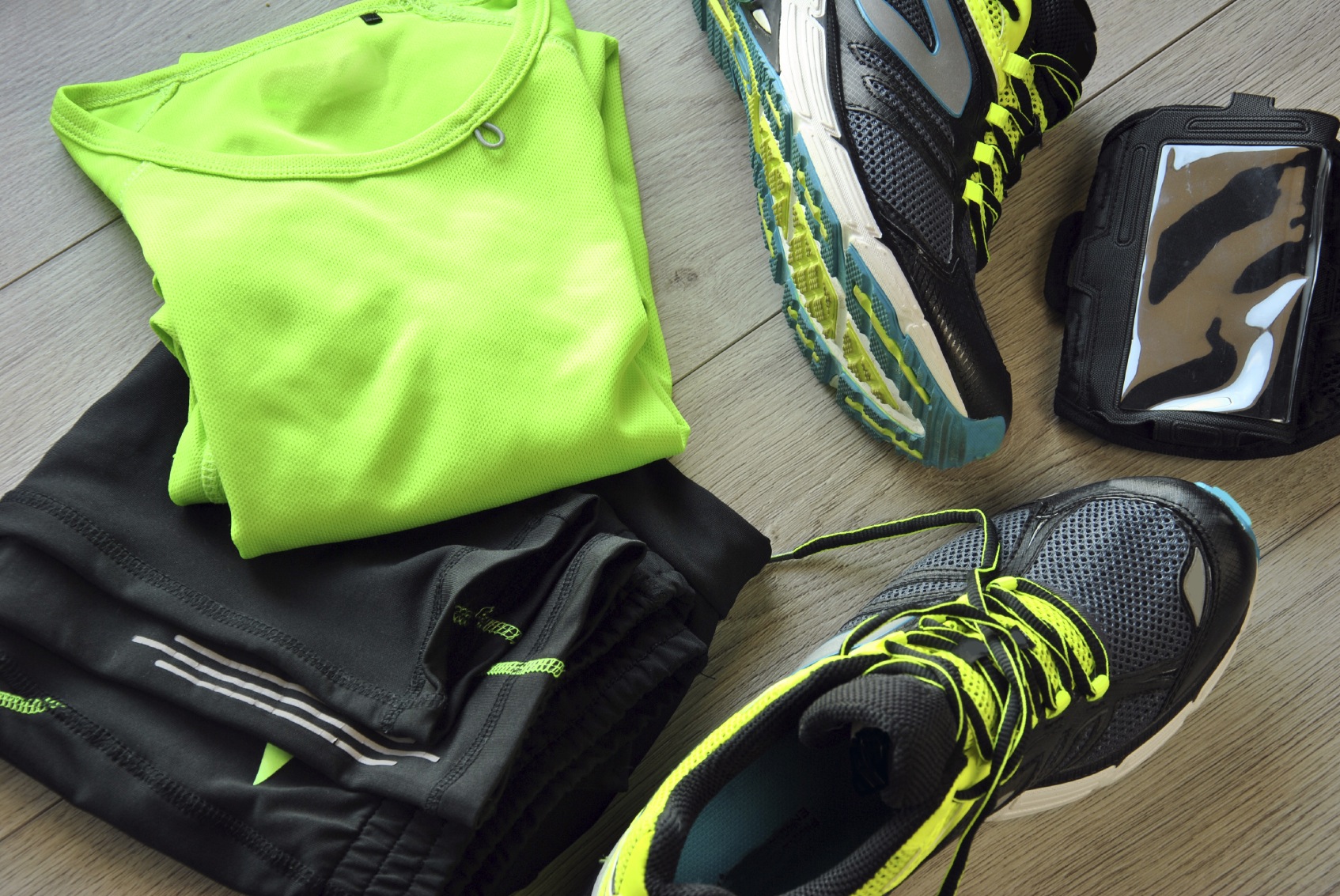 You know that question you asked yourself before every Hamptons party this year (what am I going to wear?). Help your child figure that out before they play. During warmer months, Ramus recommends lighter weight clothes that allow your body to cool off by sweating. Then comes the hard part: staying active outside in the winter months. Dress in layers. Ramus likes Dri-Fit material clothing, which evaporates sweat so you’re cooling down internally by not getting cold outside. And of course, safety first. “Make sure that you’re following the rules and regs as far as protection,” she said. “If I’m out rollerblading, I want to have kneepads and a helmet on. Same thing with cycling and skateboarding.” 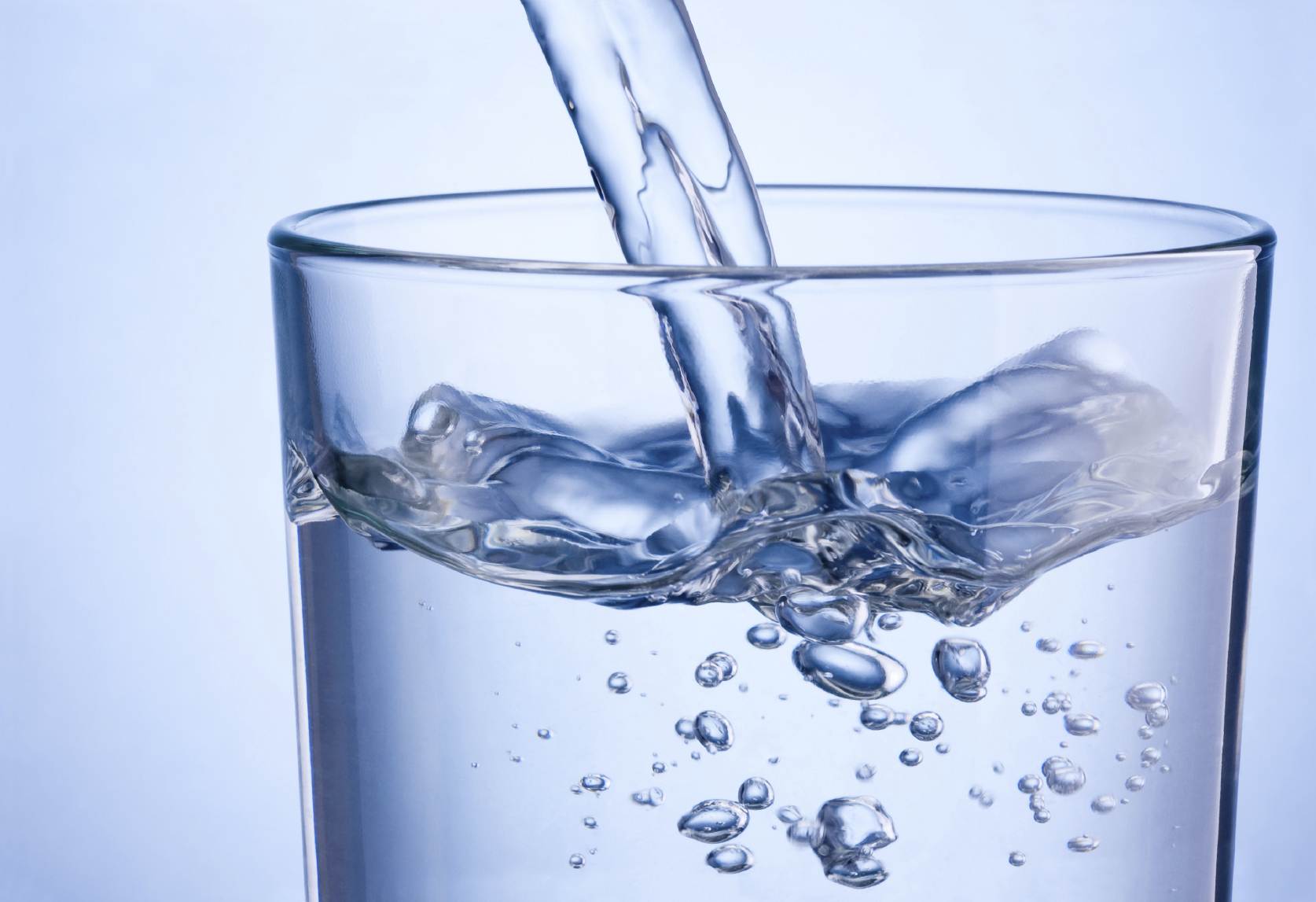 Playing with your child is so much fun, but don’t forget to monitor how much water you’re all drinking, both during your workout and throughout the day. “A safe, general and easy way to start out is take whatever your body weight is and divide that by two and that’s the minimum number of ounces of water you should drink every day,” Ramus said. So a 100 lb. child should be drinking 50oz of water, and a 130 lb. woman should be drinking 65oz of water. Steer clear of drinks like Gatorade and Powerade, which contain empty calories, even if your kid loves the bright orange color. “A typical Gatorade is more than one hundred of calories. Even with low-calorie versions and G2s, you’re grabbing about 50 calories,” Ramus said.

As a best practice, make sure you’re taking your child to the doctor for a visit once a year. “Getting a checkup from nose to toes is general overall health and fitness,” Ramus said. “The typical red flags are anything cardiovascular components and the general muscular/skeletal system, like if they have any scoliosis or spinal curvature or a flat foot condition.” The pediatrician can explain any limitations or modifications your child needs in his fitness regime if he has any of these conditions.