This time of year, tourists and locals alike flock to the Forks to savor the bounty of Long Island’s grapes. Much of what visitors see is the front end of wineries: the vines, the tasting rooms, the shops, the live music, the wine. But Mother Nature, the grapes, soil, presses and techniques are just one part of the story. What’s happening behind the scenes is as important as these factors in influencing the wine—it’s the story of the winemakers themselves.

Anthony Nappa doesn’t like to prognosticate about the fall harvest. Like his winemaking brethren, he remains non-committal, albeit optimistic, pre-grape picking. “We always get the question this time of year [late summer] to predict the harvest, but it is too early to tell.” A cold winter and chilly spring haven’t done them any favors either. “But these challenges are all part of the game and are not unlike the challenges of the past few years. Every year a beautiful September will make a beautiful vintage.”

After receiving a degree in fruits and vegetables from the University of Massachusetts Amherst, Nappa realized shortly thereafter that he needed to specialize in something else to make a living for himself—agriculture alone wasn’t going to cut it. “There’s really no money in farming, especially in New England. Unless you’re doing something that’s value added.”

Nappa traveled around and eventually ended up at Lincoln University in Christchurch, New Zealand. During the course of his schooling he not only studied wine but made it too, earning a dual degree in viticulture and enology. To gain more experience in the field, Nappa traveled for a few extra years and worked at wineries around the world helping out during harvest. “My first experiences weren’t me in charge of a big facility. My first experiences were making wine and learning.”

Nappa has been head winemaker at Raphael since 2013, but it’s not where he first planted his local roots. He made his way to New York in 2007 to take a job at Shinn Estate Vineyards and left three years later to pursue his own brand. When it comes to making his wine, he doesn’t depend much on lab work. “At this point, I rely mostly on taste,” he said. But that doesn’t mean science isn’t involved. “Obviously tasting wine is based on a personal feeling about it, but I’m still tasting to taste the chemistry of it, the balance of it.” 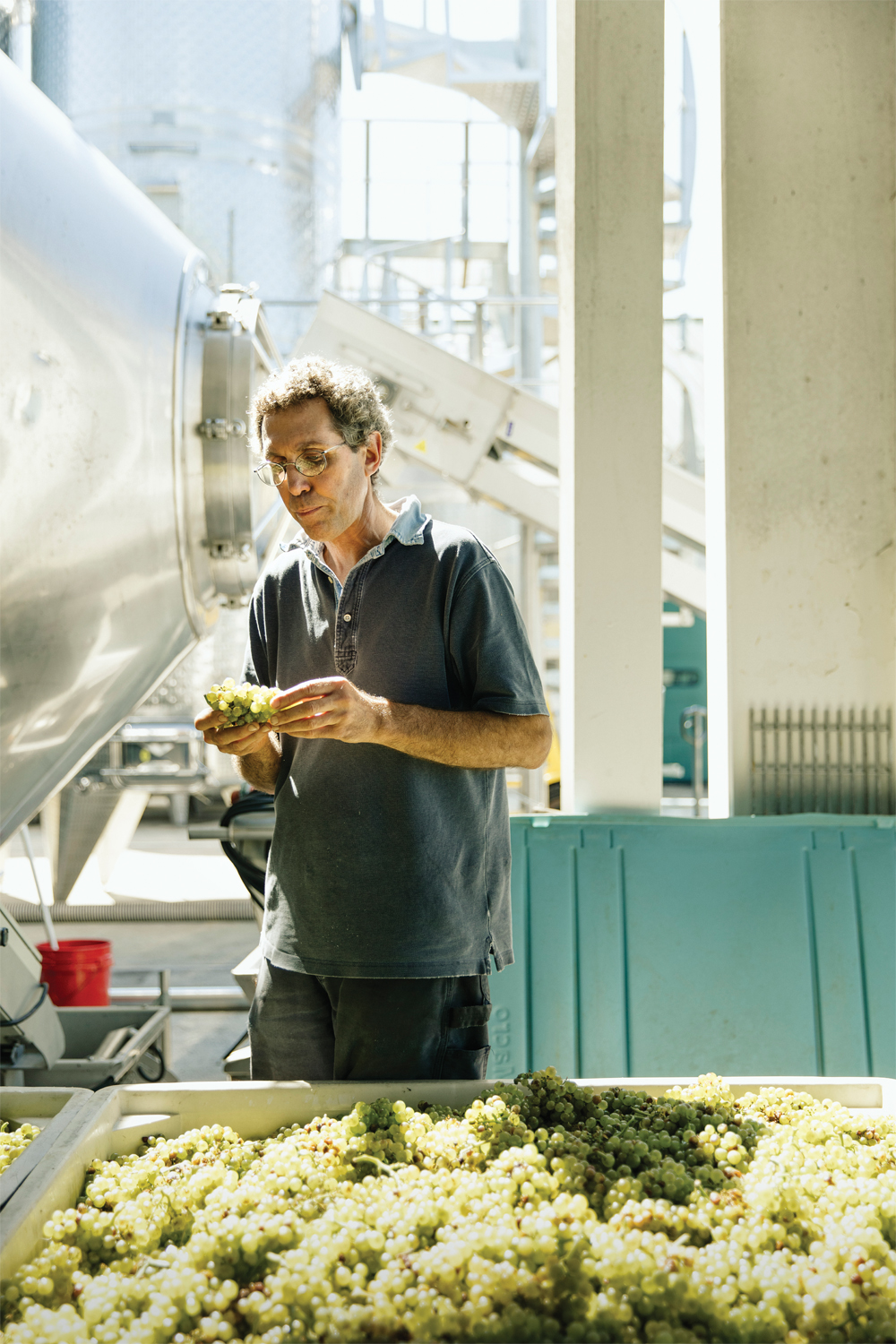 There’s always been a bottle of wine on John Leo’s dinner table. Every Sunday, the Leo family would take a trip to his grandparents’ house for dinner. It was there where he had his first sip of wine—a taste of his grandfather’s blend made in the basement. “I always had it mixed with cream soda. I remember growing up, until I was probably sixteen years old, cream soda and his red wine,” Leo reminisced.

Leo was working as a reporter at a local newspaper before he decided to “just put on a backpack and go away for a while.” It wasn’t long before he began tasting grape varieties from South America, Europe and Central America. “I wanted to understand how good wine became good.”

After settling down in the Hudson Valley area, Leo “came to quiet, cold, suspicious Long Island wine country unsure of its potential. I landed a job in the vineyard at Wölffer Vineyards (then called Sagpond) and quickly learned the great potential for grape growing the region has.” He’s been part of the East End scene since the early 90s and joined Clovis Point in 2004.

“We only get one harvest per year and have to learn slowly, year by year, how to handle the grapes each vintage gives us,” he said. In our region, bud break is late and typically happens the fi rst week of May. The advantage is the avoidance of spring frost, which could “basically kill a vintage.” The disadvantage is it limits the kind of grapes that can be grown.

Yet for better or worse, Leo has strong memories of pruning vines in thigh-high winter snowdrifts and later pulling leaves to expose clusters to sunshine. Several years later, it was easy for Leo to reflect. “Tasting the 2007 vintage in barrel after a year of aging, I recognized beauty and elegance and a sense of our region’s surprisingly great potential.”

He’s singularly obsessed with albariño (a white grape from northwest Spain and Portugal) and believes it can grow well on the East End. But to drink, he prefers subtle, elegant, deep red wine. Merlot does well in the region and merlot-based blends are what he focuses on. His blends differ from vintage to vintage but almost always include cab franc, petit verdot, cab sauvignon, malbec or syrah. 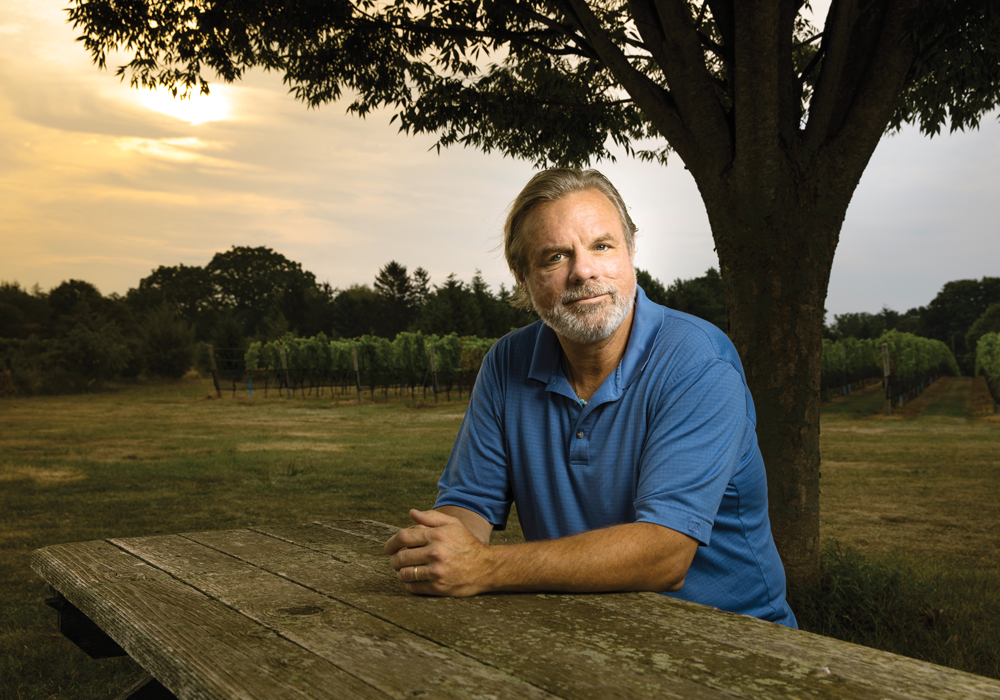 As a child, Rich Olsen-Harbich’s parents introduced him to grape varieties, many of which came from Rhineland, his mother’s birthplace. A native Long Islander, he carried this botanical interest with him to Cornell University where he studied agronomy, viticulture and oenology. At the time, being in the Finger Lakes region not only helped Olsen-Harbich get in to the wine industry, it provided him with endless opportunities in a region that was flourishing.

“The wine—this was the early 80s—it was starting to get more exposure. There was a lot of chatter around a couple of producers— Wiemer was one, Dr. Frank, Gold Seal was making sparkling wine back then, but Weimer was busting out.” His admiration landed him a stint working with this up-and-coming wine producer. It was a job listing advertised at Cornell that brought him to Bridgehampton Winery where he worked the ’83 vintage. He stayed on for 11 more years as the head winemaker until the winery was sold to Lenz in ’94.

Long Island is in Olsen-Harbich’s blood and he makes no bones about his commitment to the area. “We’re the underdogs and we’re a small region, so we have to work even harder to show the world what we do. But it’s getting easier everyday.” Part of what makes it easier was Olsen-Harbich’s early efforts to bring recognition to the fledging wine region. In ’84, he did the legwork on the applications establishing Bridgehampton and then the North Fork as American Viticultural Areas (AVAs), a federal recognition of the pedigree of a region.

Olsen-Harbich’s winemaking continues to evolve but holds true to his early love of the region. “My inspirations have come from Germany, Alsace, Loire and Bordeaux, but the style I’ve developed has really evolved into a local one—fresh fruit, crispy, juicy and balanced with little-to-no oak and very moderate levels of alcohol.” He’s also hoping to clear up a general misconception about wine. “I think the old saying that ‘it gets better with time’ isn’t always the case. [Our reds] have to taste good when we’re putting them in the bottle and when we’re releasing them for sale.” 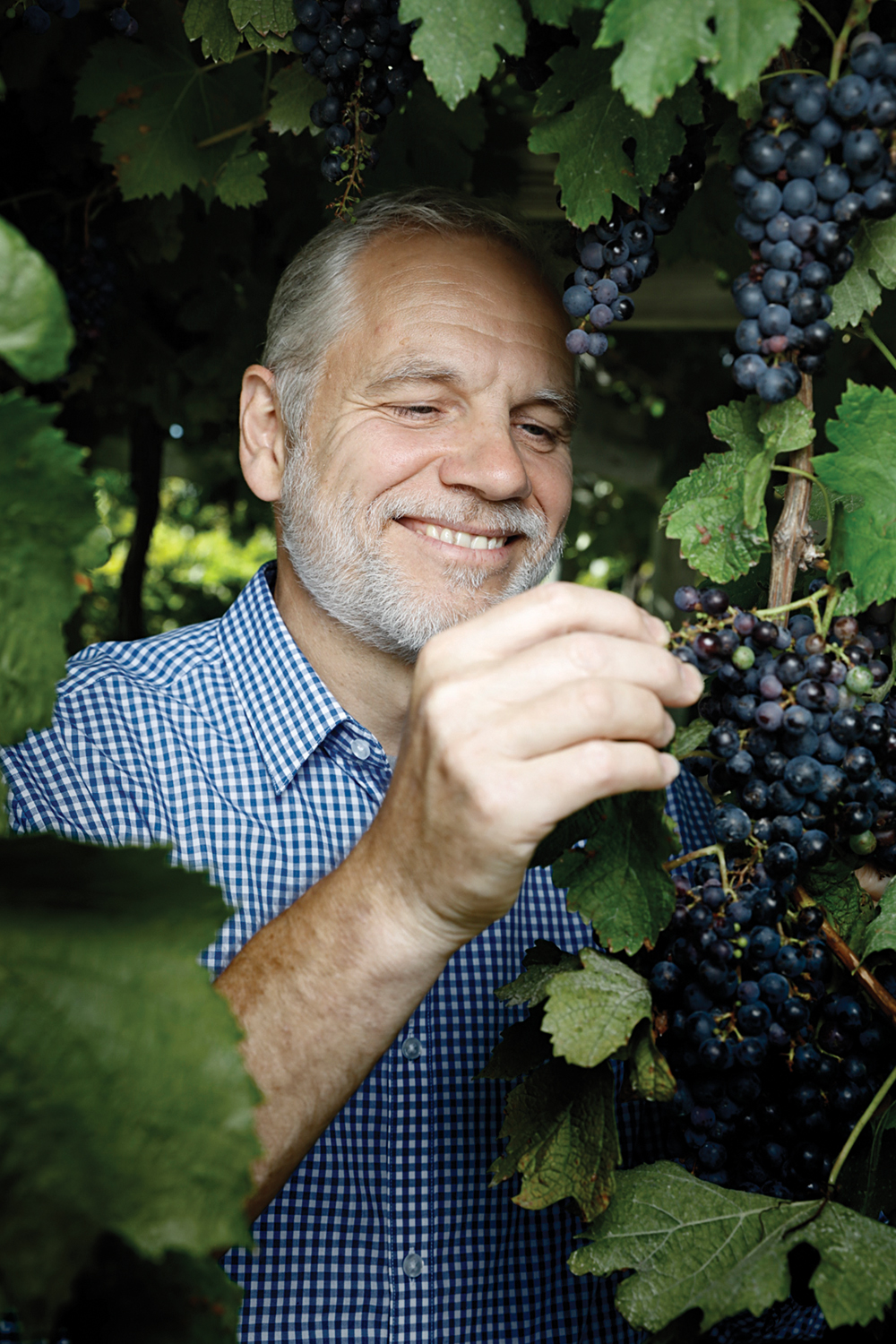 “The harvest is just crazy intense, every minute you make decisions that determine everything. You want to pick the perfect ripe grape for that moment and wine style,” said winemaker Roman Roth, also a partner in the vineyard. This time of year, two to three times a week he’s feeling and tasting grapes plucked right off the cluster and performing intensive berry sampling—weighing and testing the sugar levels and pH.

Born in Germany to wine merchant parents (his father was also a winemaker and cooper), Roth was literally raised on wine. “Even on a normal evening if there was a special bottle or label or harvest…it was a very important celebration of something great.” He remembers his first taste at around age 5 when he went downstairs to the family store and tried a Hungarian red, Rosethaler Kardarka. “Of course I liked it because it was sweet.”

Roth’s resume is a highlight reel of oenological experience: apprenticeship at a wine cooperative at age 16; working harvests in California and Australia in ’86 and ’88; and earning his Master Winemaker and Cellar Master in ’92. Traveling to the nascent wine scene in the Hamptons that same year, Roth was apprehensive. “Of the thousands of books at [the College for Oenology and Viticulture in Weinsberg], I could only find two on Long Island!” he laughed.

Despite the lack of reputation, Roth’s toughest obstacle was swaying the court of public opinion. The Island was unknown as a region, and thought to be too cold with too short a growing season. “Our growing season is actually long, we’re the last in New York to get frost…for chardonnay we have 20 days longer of hang time to let the seeds ripen and yet we still make these elegant wines that are not over sweet or fat with alcohol.”

From the beginning, Roth’s goals for his wines were threefold: food friendliness, longevity and authenticity. “I like acidity, that’s why you squeeze a lime on your fish, it’s a balance to richness. And that was very natural to this climate.” Roth is proud of the fact that he never forced the grapes to be something they were not. Instead, he bucked the trends at the time, crafting wines with vibrancy, sharpness and low alcohol, yet still balanced, concentrated and elegant. “Our style is true to how our grapes ripen here, I didn’t have to push something different.”