Color can be intimidating. Too often, homeowners err on the side of bland to avoid commitment (read: beige), immersing everything in a monochromatic palette that falls flat. Yet tint-happy adventurers who go too far quickly descend into sensory overload. We have nothing against the neutrals, but there’s no denying the right hue can go a long way in livening up a dull room. To offer guidance, Pulse queried designers across Long Island to share their most creative and sophisticated uses of color. Take a cue from these fearless chromatists and experience life in Technicolor. 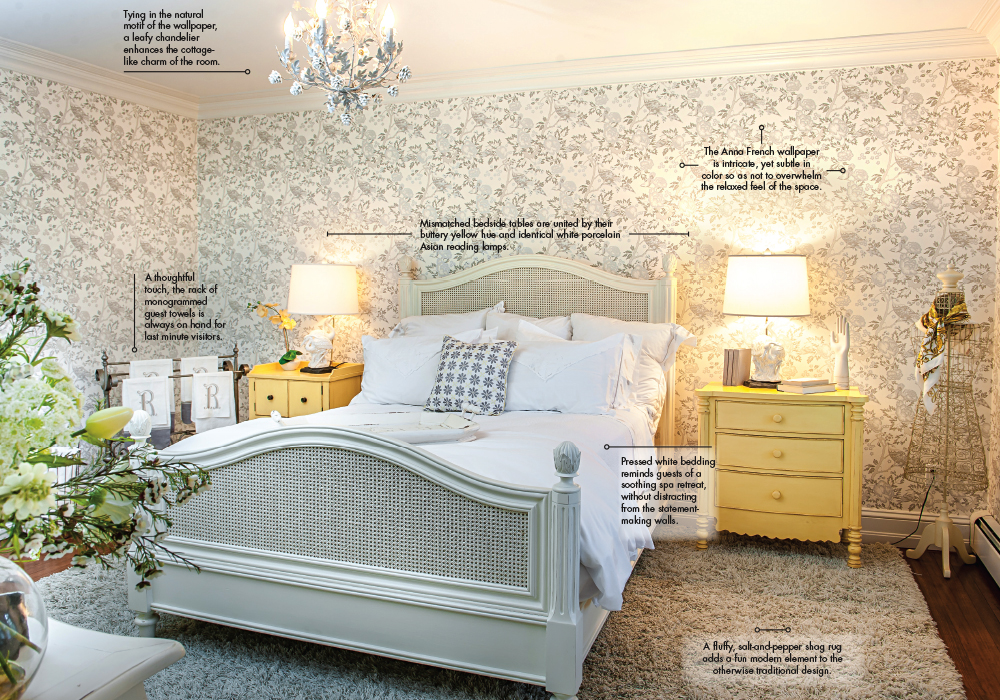 Cohesive design often arises out of a single source of inspiration— a painting, a cherished heirloom…or in the case of designer Kim Radovich’s guest room, a scarf. A vintage Hermès scarf in a yellow and gray horoscope print, the designer’s favorite, sparked the idea for a bright accent color with a French twist. “I draped it around this dress form and thus began the plan for that room. That’s my little statement in the corner. It’s a little nod to my Francophile obsession.” Radovich, owner of Kim E. Courtney Interiors in Huntington Bay, sought to transform a “dark and dreary” spare bedroom into a warm and inviting space for guests, reminiscent of a cozy B&B. While the color palette is predominately a neutral gray and white foundation, it’s the sunny yellow bedside tables that set the tone. “That little pop of yellow, it makes you cheerful. When you wake up it makes you happy, makes you smile.” Combined with crisp, white linens and a two-toned wall covering in a traditional nature print, the result transports guests to the French countryside. 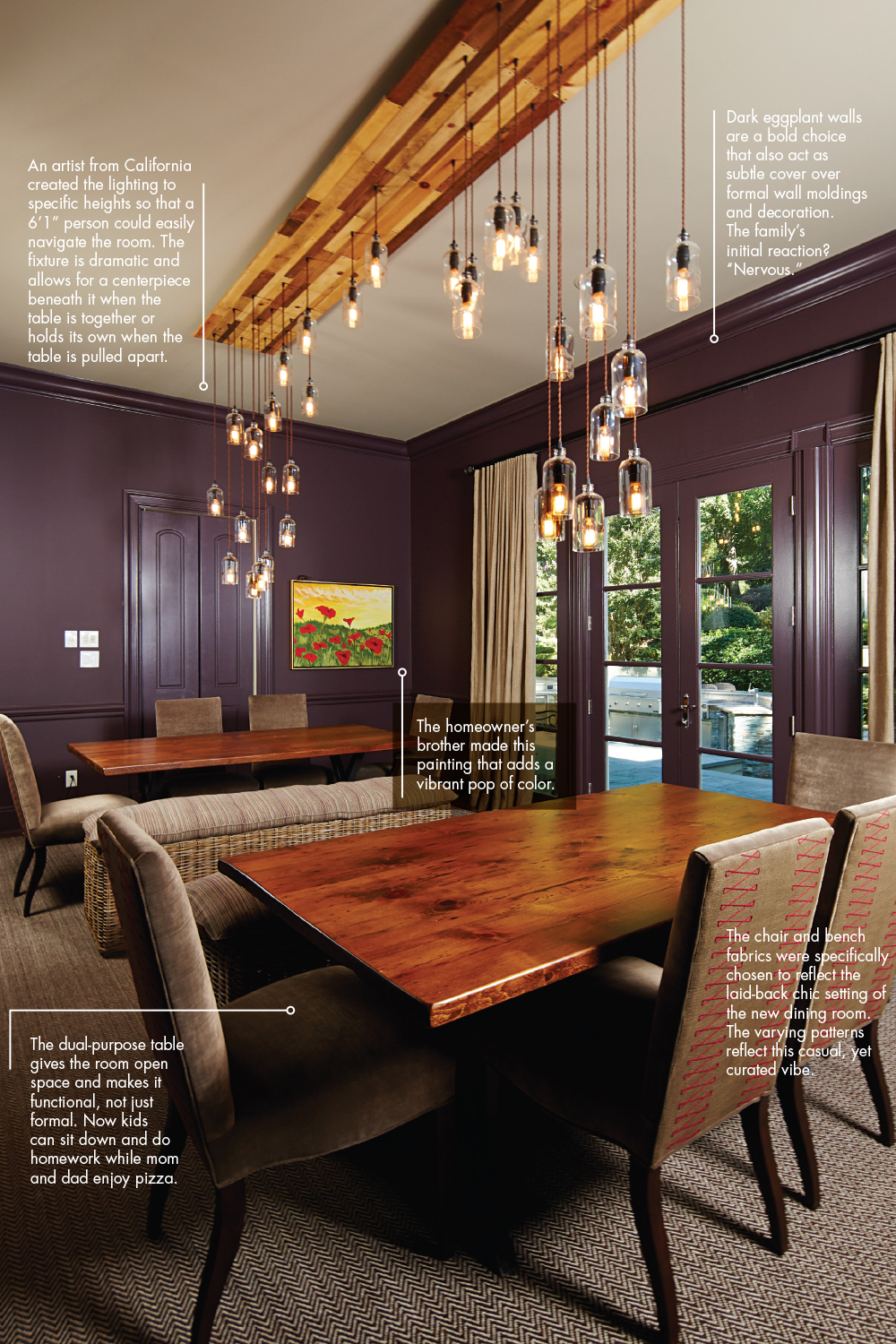 Five minutes after meeting this Sands Point homeowner, designer Annette Jaffe of MSM Property Development said to her client, “Your home is nothing like you.” Fortunately, the client agreed. The house was formal, stuffy and staid, nothing like the warm and affable family living in it. The dining room was the worst off ender. “You have to look around this formal dining room to see the backyard and it had this big table blocking it and a big glass chandelier hanging over. The room was just waiting for a holiday.”

Color set the tone. Jaffe wanted to keep in line with the neutral earth tones throughout the rest of the house, but also mask inherent formal aspects. “I didn’t want to pop out the molding. I wanted a very cool vibe.” So walls and doors both received a coat of daring, deep aubergine. The rest followed suit.

The farm table is custom proportioned to be both one large formal setting or split apart for family dinners. The benches and chairs were purposefully mismatched. The lighting is also one-of-a-kind, crafted from recycled materials. “The room has a feeling of being curated and cultivated. Not like someone ‘decorated’ it,” Jaffe said. 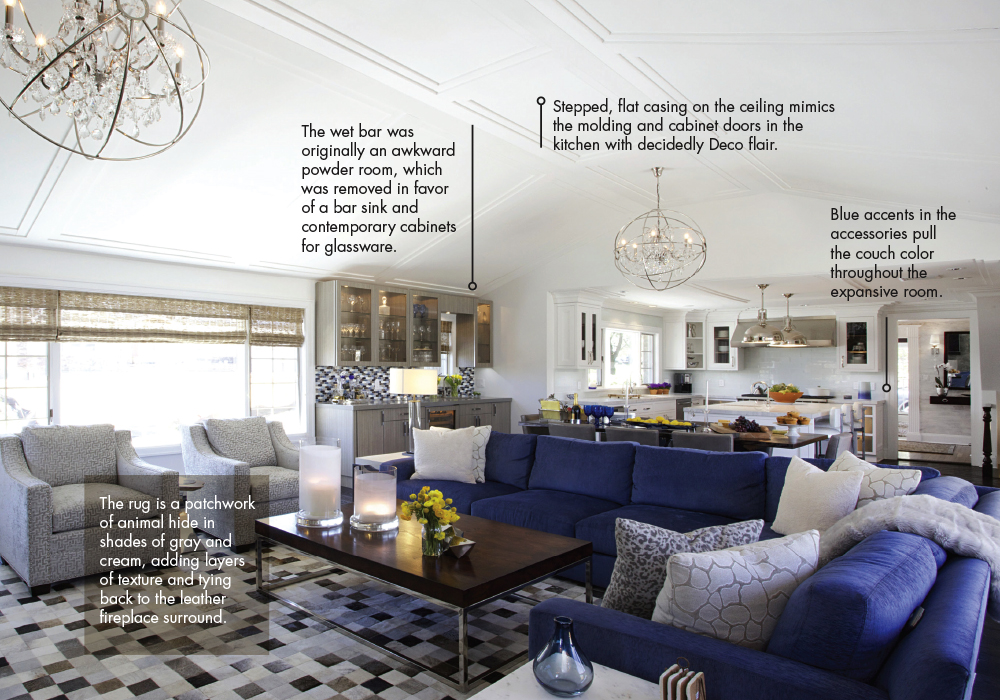 It’s always tempting to take the safe route when selecting a large piece of furniture, but putting all the chips on the right color can completely transform a room. That’s exactly what the team at Hierarchy Architects + Designers opted for in a completely remodeled living space for a home in East Hills. The room is mostly a relaxing neutral palette of grays, but the L-shaped chenille couch stands out in vibrant cobalt. “We pulled that color out of the glass tile behind the bar…She wanted it very cool and serene, but she did want a pop of color,” said designer Lori Fleishhacker. “And it is a den, so she didn’t want a light couch. That all came into play.”

The homeowners were looking for a spot to gather when their daughters visit from Manhattan. Architect T.J. Costello was tasked with transforming the oddly divided kitchen, breakfast nook and family room into one continuous space. “By having it all open, somebody can be pouring wine and somebody can be watching the game and it’s all connected,” he said. The multi-purpose room is united under a cathedral ceiling, accented with a modern stepped casing, a style that directly echoes the kitchen cabinets. 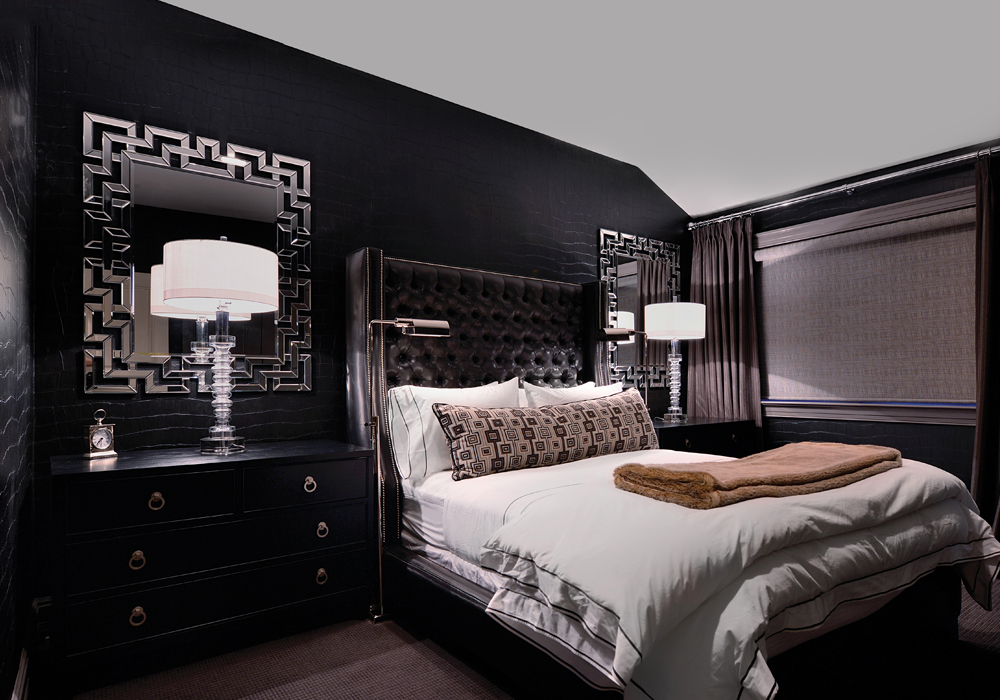 Sometimes the boldest color is the absence of all color. As a wall covering, people are afraid of black. They think it’s too dark and feels closed in. But if done right, quite the opposite is true. It’s the most daring of daring choices. Designer Keith Baltimore used it to design the bedroom of a 17-year-old young man. “Well, he’s 17 going on 24… He’s well-traveled and sophisticated and wanted something to come home to after college that didn’t feel like a kid’s room,” Baltimore said. Using black immediately lends an air of luxury and high-end drama, like an upscale Manhattan hotel room. Add crocodile texture and a custom-made leather headboard and now it’s like sleeping inside Prada luggage. In a good way. “I tried to make it sharp and classic, so it’ll never go out of style. I used classic masculine forms like Greek-themed mirrors and geometric throw pillows.” The austere aesthetics serve a function as well. The bedroom occupant is still a teenager and prone to disorganization. “This room doesn’t look like it has that option,” said Baltimore.