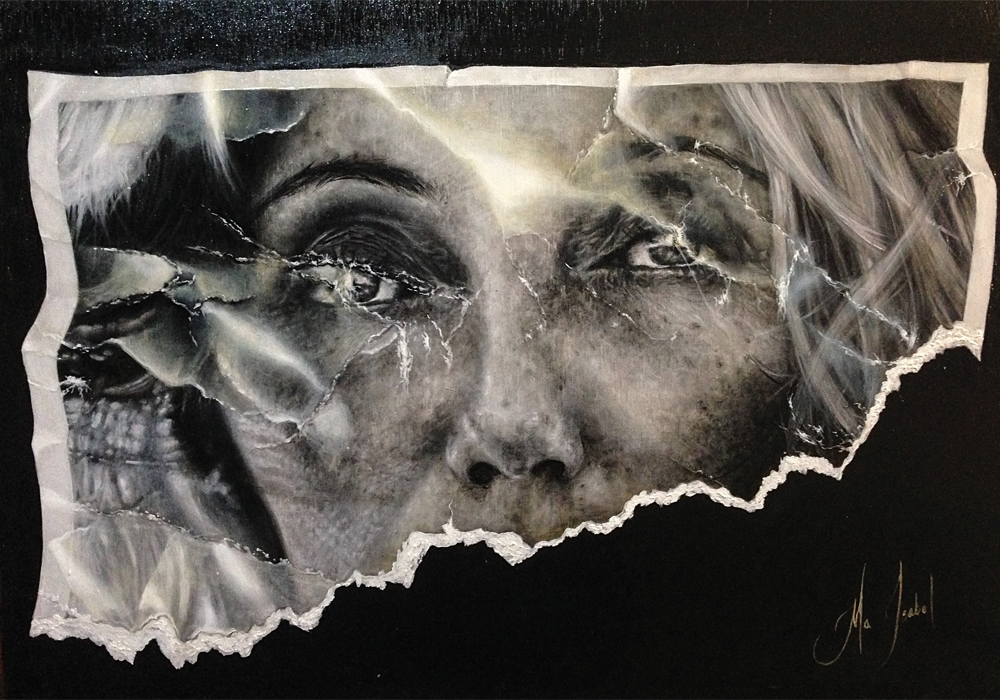 Using fine brushstrokes that nearly mimic a charcoal drawing, Isabel Olivares creates what appears to be a representation of a torn black and white photograph. But “Autumn,” her depiction of a woman vaguely staring at us, is a mysterious oil on wood panel. Her hair wisps over her eyelashes drawing us in to wonder—maybe even lust. “This piece represents a dialog with the future or present self in the autumn of life,” said Olivares. “It is said that a photograph steals a moment in time and yet it can also be a window that unlocks all the memories that bring back the battles that makes us whom we became or failed to become.”

Olivares is just one of the women exhibiting in the third installment of Women Painting Women at RJD Gallery in Sag Harbor. It’s an extension of an online collective of the same name that was established in 2009 by artists Alia El-Bermani, Diane Feissel and Sadie Valeri. Deborah Chapin’s “Invincible” (oil on linen) will be among the works hanging at RJD. A young redheaded woman appears to be either submerged in water or reflected in it upside down. Beneath the water’s surface, she’s clear and calm. Above it, a swirling, reflected image of wild red hair. The cool, clear water shimmers all around her and we’re not sure if she’s floating or drowning. Despite this situation, she seems confident, even quietly defiant. “Water allows the viewer to transition between the real world and the surreal easily, so the models and I can create surreal environments or movements within reality.”

In a soft nod to the surreal portraiture of Rene Magritte, the subject in Beth Sistrunk’s “Duality” (oil on acrylic panels) stands quietly, her back arched in concert with a dance of falling rose petals. She appears to be loosely reflected in a mirror, but the images do not match. Sistrunk said it’s “about the dichotomy that exists within each of us, the inner self that we keep private and the personality which we reveal to the world.” This distinction between selves is rendered in soft, warm hues perhaps illustrating that contrasting identities can be welcomed. 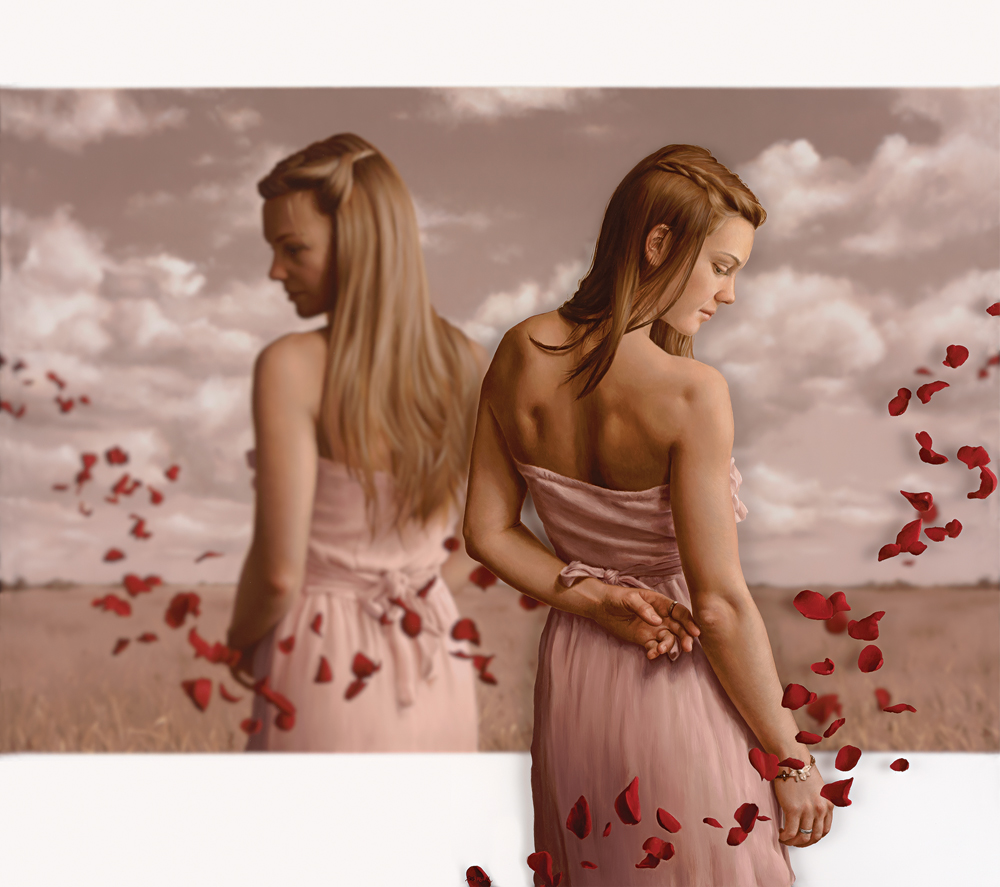 Carla Falb’s “All American Girl” (oil on canvas) is a figurative depiction of a strip club. “When I was painting the patriotic costumes, it occurred to me that each of the dancers embodied a skewed version of the American Dream,”said Falb.

The stereotypical strung out, coked up strippers are replaced by curvy girls with playful smiles who tower over their audience, exuding pure physical confidence, while the men sit passively. It’s as if the women are performing for each other, or more importantly, for themselves. “Their provocative moves inspired the crowd, yet they often appeared distant, elusive and most likely unattainable. The paradox is that we continually seek sensational experiences, just to discover over and over again that they are fleeting in nature.”

Since its inception, the site has featured the work of hundreds of female painters from around the world. The exhibition consists of 17 contemporary artists chosen from more than 200 submissions. According to Eve Gianni Corio, gallery director, “We seek for the very best developed and expressed contemporary painted figurative work we can find.” The works are diverse in their content, approach and style, yet there’s a unifying theme that explores the mystique of women.

Gallery owner Richard Demato summed it up as an equilibrium saying, “In a time when women are conceptually treated as equals, we still have inequality on many levels. This [exhibit] gives women a unique forum to express themselves without interference or limitations of any manner.”

RJD Gallery’s third installment of the Women Painting Women exhibition will open with a cocktail reception from 6-8 pm on Oct 10 and will be on display thru Nov 8. For more information, visit rjdgallery.com.