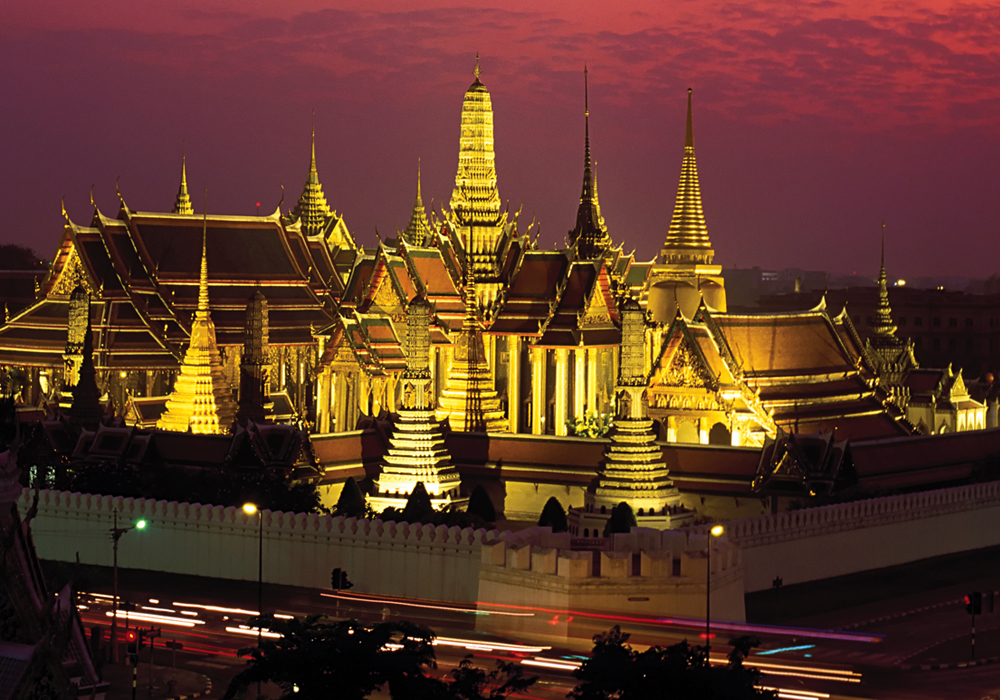 Bangkok, one of the world’s most popular destinations, is about as far from New York as geographically possible without leaving the planet. But there is a hotel there where New Yorkers can experience upscale luxury with hometown appeal, not least of all because its general manager is a native New Yorker and elephant polo virtuoso (more on this later). Unabashedly exclusive, The Siam is the most expensive hotel in Bangkok. The five-star property offers jetsetters entry into a rarefied world beyond the din of tourist-crowded hotspots.

A low-rise property with only 39 rooms, The Siam is a completely different experience from other top Bangkok hotels where guestrooms number in the hundreds and lobbies are prone to evoking Penn Station at 5:30pm on a Friday. The Moderne-meets- 21st century style of the hotel’s main building serves as an appropriate setting for showcasing a diverse assemblage of Chinese and Thai antiques, vintage travel posters, rare books and curious esoterica, a collection of Asian art rivaling the city’s busy museums. The objets d’art are part of the private collection of affable hotel owner, native Krissada Sukosol Clapp (informally, Kris) who is in fact, a well-known actor and rock star. 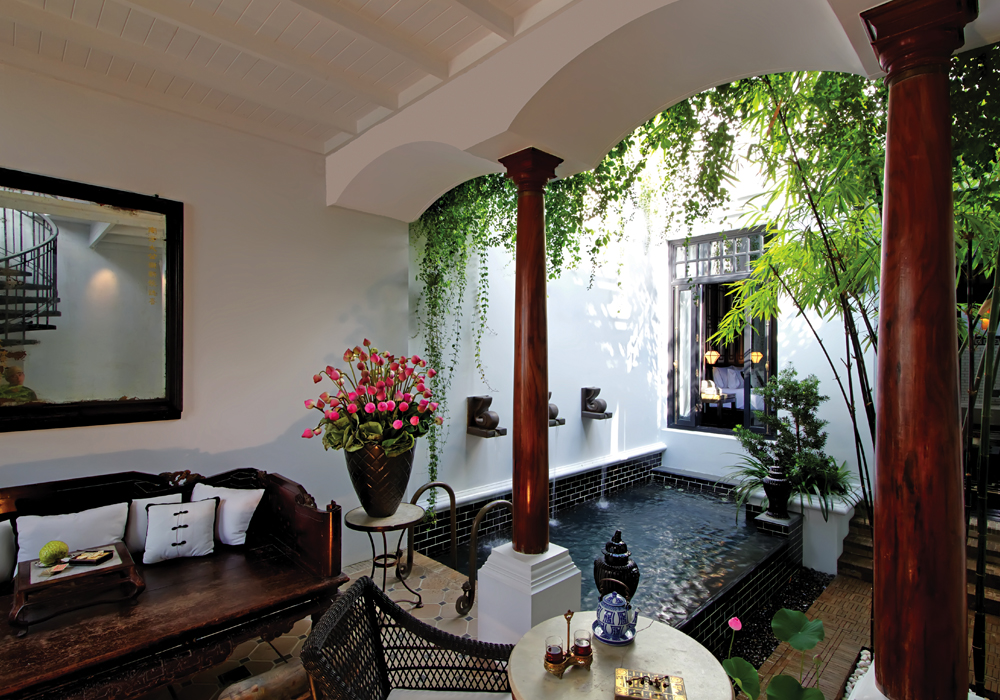 Living area and exterior of the Siam

The smallest category of accommodations at The Siam is junior suite and it’s larger than many one-bedroom Manhattan apartments, easily accommodating king beds, double wardrobes and Art Deco-designed living rooms. Private pool villas, unique in Bangkok, offer an exclusive pool and rooftop terrace and interior garden. Guests who want to opt for a truly unique and authentic lodging should consider a stay in Connie’s Cottage, a traditional Thai house that belonged to socialite and bonne vivante Connie Mangskau, who dallied in intelligence-gathering for foreign governments when not busy hosting gala soirées of the Bangkok social scene in the 50s and 60s. The original wood house on stilts is now the bedroom, accessible by exterior stairs from the ground-floor living area whose walls fold back completely to create an open-air pavilion.

Bangkok is an enormous megalopolis, but it began as a small town laced with canals linked to the Chao Phraya River, still the center of the city to this day. Modern Bangkok’s roads are a surfeit of cars, trucks, buses, motorcycles, mopeds, rickshaws and pedestrians vying for space, which makes traveling by boat along the river and its myriad branching canals (“klongs”) by far the most pleasant way to explore the city. And The Siam, located on the Chao Phraya River (“River of Kings”), has a fleet of complimentary speedboat shuttles along with a teak wood barge at the ready for river excursions that bypass tourist hordes.

One singular waterside stop is Amita Thai Cooking Class, an unpretentious establishment where Khun Tam and her friendly team welcome passionate food connoisseurs and curious amateurs to their little piece of herbal paradise right in the heart of Bangkok.

Any cooking school that sends a boat to pick up its students is already a standout, and the ride from The Siam along the Chao Phraya is a kaleidoscope of Thai history. Many colorful temples and traditional buildings are passed along the way to Amita, located on a tranquil plot of land where lucky visitors are immersed in the nuanced flavors of local cuisine. The experience begins with a refreshingly cool welcome towel and a glass of lemongrass tea sipped through lemongrass straws. Nothing at Amita is ordinary, not even the straws.

THE ART OF SHOPPING 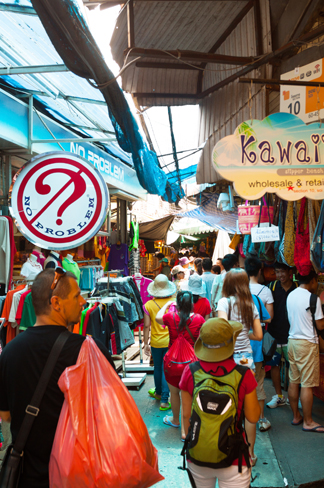 Traveling south down the Chao Phraya, the Siam’s private boat can take guests to River City, a small mall dedicated mostly to fine antiques and furniture. Many items for sale are large, museum-quality pieces that are evocative of Thailand and Southeast Asia. A short ride northeast onto the Bang Sue canal brings shoppers to the famous Chatuchak flea market, which serves as the venue for rising new artists to sell their work directly to the public. Chatuchak is one of the largest flea markets in the world and like its Parisian counterpart at Porte de Clignancourt, Chatuchak is not just for bargain hunters; the art, antiques and furniture for sale are among the country’s best.

Of Palaces and Asian Art
To appreciate the finesse of Thai art and the attention to detail prevalent in the culture, it is worthwhile to spend some time admiring the workmanship on display at the city’s most impressive sights. Sea legs can take a rest with a walk to the impressive Vimanmek Teak Mansion, a royal residence open to the public 15 minutes away from The Siam in Dusit Park. It is the world’s largest teakwood mansion, improbably constructed without a single nail. The mansion was built in 1868 as an island retreat, but King Rama V had it moved to its present location in 1901. Take to the Chao Praya southbound again to land on the shores just outside The Grand Palace and Wat Phra Kaew, the city’s most recognizable landmarks offering visitors a privi- leged glimpse into royal life in earlier times.The very long wall enclosing the Wat’s courtyard is decorated with paintings depicting legendary and heroic scenes from the Ramakien, the Thai national epic, in exquisite detail.

There is one local sight no in-the-know visitor should miss. The Jim Thompson House, located just off a waterway and east of Saphan Hua Chang Pier, is actually an agglomeration of six small, traditional Thai country houses. It was brought together to create one large home celebrating the apogee of historic Thai architecture.

Travel Tip #33 More than a dozen airlines link New York and Bangkok via their various hubs in Europe and Asia. A best bet is Turkish Airlines via Istanbul to experience impeccable in-air services and lavish Business and First Class Lounge in transit. Once on the ground in Bangkok, Limousine Express provides the most professional transportation in the city.

As if the structure itself were not beautiful enough, the house is full of priceless examples of Southeast Asian art. The Jim Thompson House can be reserved for a private tour, which serves as a suitable overview of Thai arts, or for a private dinner for an occasion to remember. Jim Thompson, an American who lived in Bangkok and was a good “friend” of Connie Mangskau (read: a fellow espionage agent), is credited with both a revival of interest in traditional Thai architecture as well as a renaissance of the country’s silk industry. Today, Jim Thompson silks are regarded among the country’s best. Silk, in fact, is among Thailand’s greatest bargains. Hot Tip #2: Companies such as Jim Thompson and Shinawatra sell top-quality silk for a fraction of the prices they would command in the US.

Elephant Polo The King of The Sport of Kings

One of the most original ways of raising money for a good cause is also one of Thailand’s grandest spectacles. If polo is the sport of kings, elephant polo is the sport of billionaires, one in particular. American-born William Heinecke, whose vast fortune includes a portfolio of impressive hotel properties around the world, has a particular interest in the protection of elephants, animals revered in the country he has called home for more than 50 years.

Heinecke’s five-star hotel brand, Anantara, is the major sponsor of the annual event that takes place during the last week of August. The King’s Cup Elephant Polo Tournament was first played in 2001 and since then it has grown to become one of the biggest charity events in Thailand, having raised more than $600,000 for projects that improve the circumstances of Thailand’s elephant population along with the elephant handlers, known as mahouts, and their families.

A formidable presence in this rarefied world—both on and off the field—is New York-born Jason Friedman, the paragon of the gentleman sportsman. A central figure in elephant polo, Jason’s first responsibility for the welfare of the majestic pachyderms came with his position as general manager of Four Seasons Tented Camp in Thailand’s northernmost Golden Triangle region. His long career in hotel management at exceptional properties across the Asia-Pacific region has culminated in his current position as general manager of The Siam, where his business acumen and social graces serve him well in a society where both are highly appreciated. Jason’s magnetic appeal attracts its own base of fans who stay at The Siam specifically to revolve around his sunny personality throughout the year.