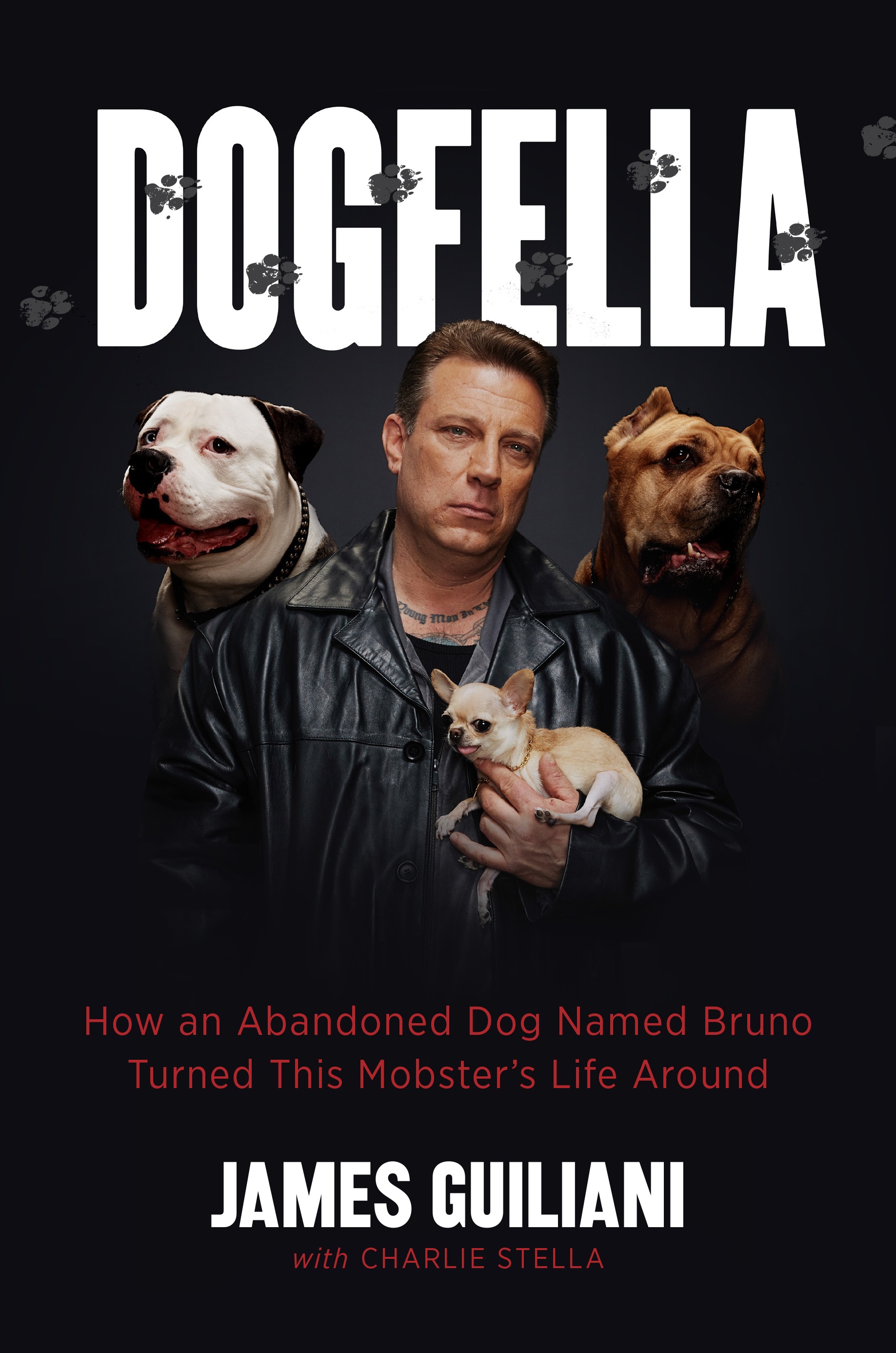 Many times, you’ve made your dog an offer he can’t refuse.

And for that, he’s sworn his loyalty forever. Whatever you ask, he does; he’s your enforcer, your protector, your good little fella. And, as in the new book Dogfella by James Guiliani (with Charlie Stella), he always backs up the family.

For most of his life, James Guiliani barely gave animals any thought.

Growing up in Queens, New York, the fourth of five boys, he thought of mayhem instead: he was the wild child, the one who gave his parents grief, the boy punished at Catholic School on a regular basis. As a teen, he joined a gang. As an adult, he was addicted to drugs and alcohol and became a Gotti family employee.

No, Guiliani barely tolerated animals; in fact, when he fell in love with Lena, “a nice Italian hottie” who happened to have a lot of pets, he ignored the cats and put the Pug out of the bedroom. Guiliani didn’t sleep with the fishes–and he definitely didn’t sleep with dogs, either.

Lena saw the seven-pound dog first; it was tied with nautical rope to a parking meter in front of a veterinarian’s office. At her insistence, Guiliani ran to check it out and found a desperately ill, abused Shih Tzu. The dog’s condition angered Guiliani; that the vet had ignored the pup inflamed him. Once the pooch he named Bruno was stable, Guiliani told Lena, “… let’s go get my dog.”

That was the first day of Guiliani’s permanent sobriety.

Although Bruno didn’t live long–and Guiliani was devastated over that–the dog’s presence and unconditional love uncovered a soft side to the tough guy. When Lena handed him Gizmo, the dog who came after Bruno, Guiliani said that it was instant: “I became an animal advocate… I became a true Dogfella…”

Can’t get enough books about animals? Then you’ll love this: take everything you enjoy about mobster movies, add a few collars (in every sense of the word), and badda-bing, you’ve got Dogfella.

With attitude-times-ten, a short fuse for humanity, and love of animals that surprised even him, author James Guiliani (with Charlie Stella) tells a tale that may make readers wince between chuckles: Guiliani doesn’t pull any punches when telling stories about living by his fists. He’s blunt in writing about violence he did to humans and violence he’s witnesses against animals, both of which I rather came to expect and, while it was disturbing, it’s integral to the story. You, of course, shouldn’t be surprised at the profanity sprinkled in these pages.

But what can you say about a former jailbird with a Chihuahua in his hands, except that you’ll want to read more about him? Start “Dogfella,” in fact, and you’ll never fuhggedaboutit.