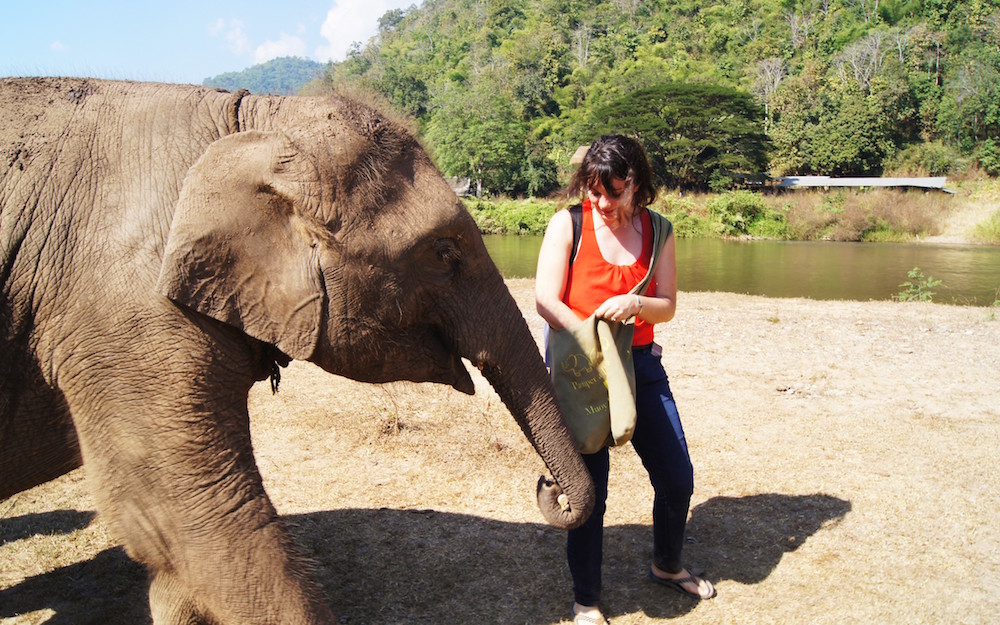 Hiking through a jungle in northern Thailand I’m trying to take in the lush beauty of my surroundings when I feel something pushing against me, trying to reach into my pack. I hear someone yell: “don’t let them steal any food,” and can only laugh as Khun Deji a 5-year-old pachyderm elephant tries to stick his trunk in my pack.

Don’t let them steal any food, yeah right I think. Even at 5, the elephant already weighs several thousand pounds more than me and is taller than my 5 foot-5 inches. I think I’m going to let him do what he wants. I quickly realize though, that these gentle giants are a bit like dogs: playful, a bit mischievous and willing to do anything for food. Six elephants following eight humans through the forest, contentedly walking next to us as we dolled out treats of sugar cane and fruits. This is one of those experiences you know you’re going to remember forever. 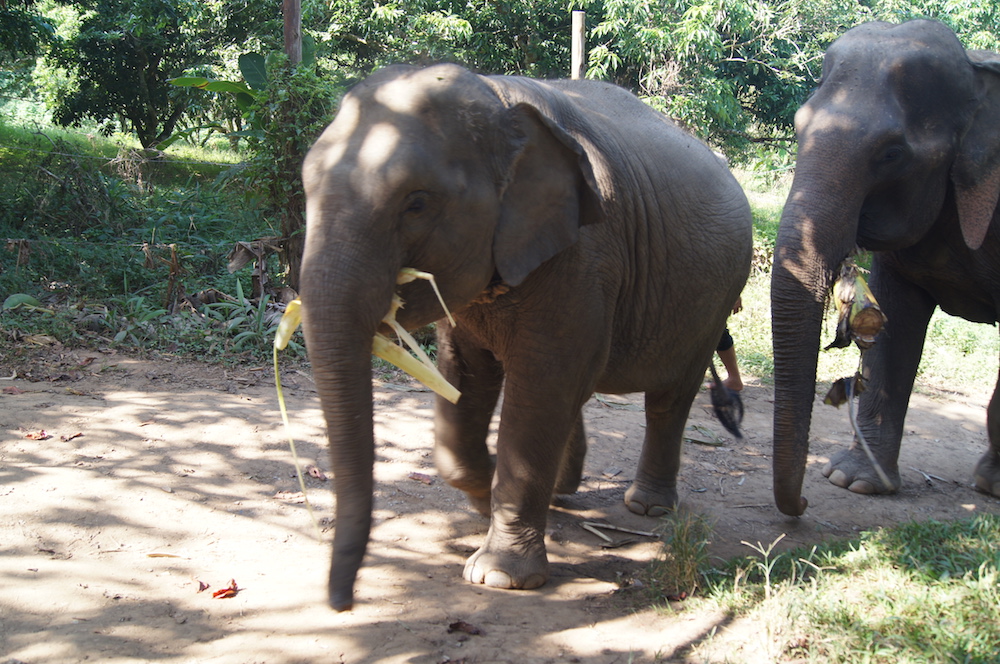 I don’t remember how old I was when I fell in love with elephants. But I do remember the elephant. It was pink, with floppy ears that had polka dots on them, a gift from my grandmother that began my lifelong fascination with the magnificent animals. I begged to see them at zoos, even the circus. It was while watching elephants put up tents for the circus that I realized how cruel humans could be to elephants. It was something in the way the elephants were pushed and prodded to set up the tents, the sad look in their eyes. They weren’t supposed to have a life like that. And more than a decade after I realized it, Ringling Bros. and Barnum & Bailey Circus did. Starting in 2018, elephants will not perform at the circus. 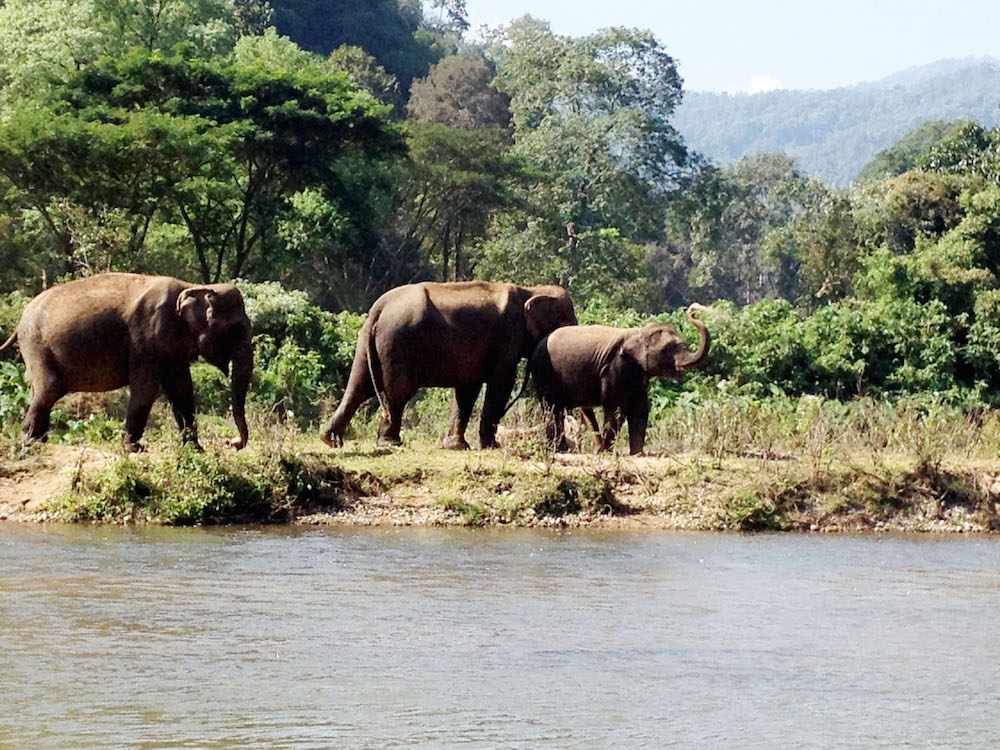 Something the very hungry Khun Deli can be grateful for, if only he knew. We wander to a clearing, stopping to eat lunch in a tree house while the elephants roam below not straying too far from where they know there is food. Khun Deli and the other elephants with us are part of the Thai-run Save the Elephant Foundation, a nonprofit that works to provide care and rehabilitation programs to Thailand’s massive captive elephant population. These are elephants that were put to work in the tourist trade begging for money on the streets, or giving foreigners rides, or working in the logging trade. One of them is missing part of her back foot, the result of stepping on one of the many landmines that still linger in the countryside. 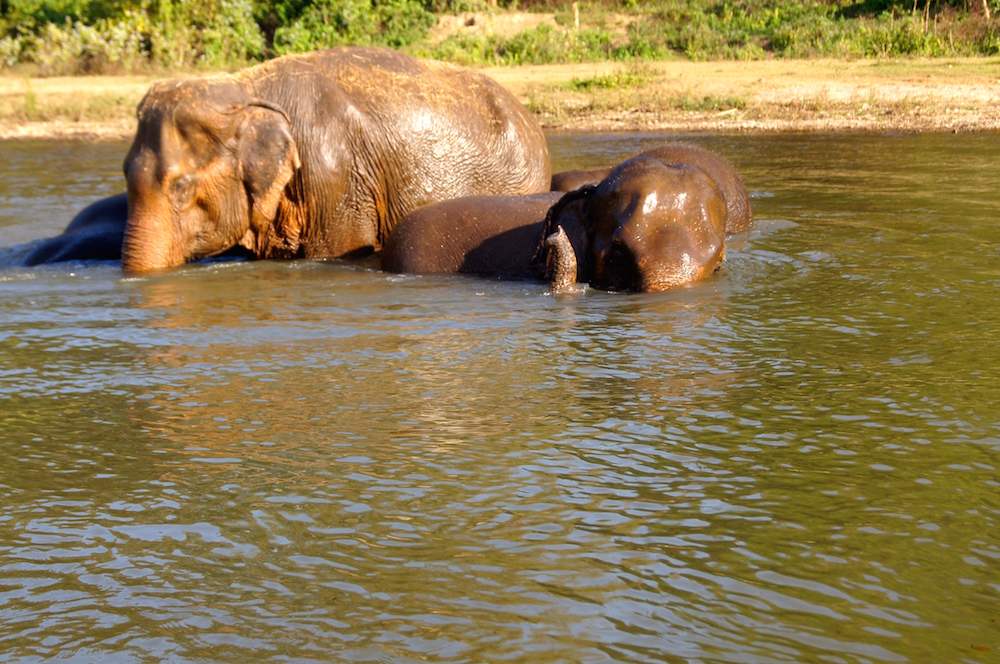 The more than 35 elephants that call Save the Elephant Foundation home can’t be completely released back into the wild, they’re too reliant on humans for that, but they can get to be elephants enjoying life instead of working.

After lunch we continue walking in the real jungle that lies only about an hour outside of the urban jungle of Chiang Mai. The elephants bathe in the river, rolling around, playing and covering themselves in mud as soon as they get out, and then we hike back. 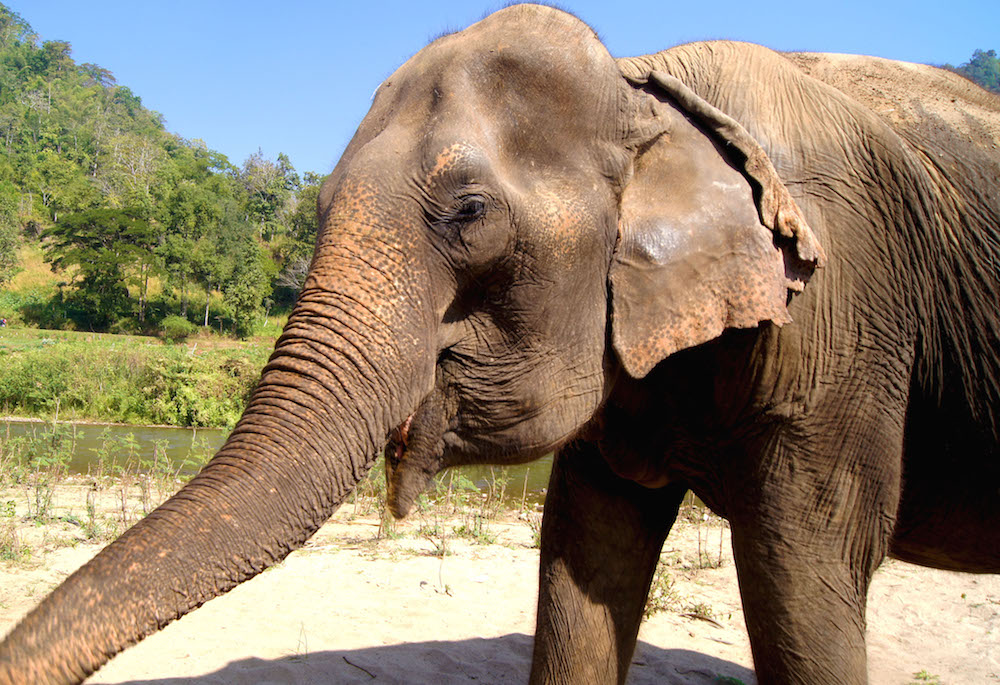 The day is part of the organization’s Pamper a Pachyderm program that lets small groups of visitors spend a day with six elephants from a local elephant camp. Simply put we spoil them.

By the end of the day the elephants, while not quite free, and still baring visible scars of their previous lives, but they were happy, playful and very full of food.