In Nancy Meyers’ The Intern, Anne Hathaway stars as Jules Ostin, the founder and CEO of About the Fit, a fast-growing ecommerce start-up focusing on (what else?) clothes that fit just right. As is common in American comedies of years present and past, Ostin appears to have it all: an incredibly spacious office in Brooklyn, a mostly enviable wardrobe, an unquestionably enviable brownstone, a very cute husband (I happen to have a thing for redheads), and the most adorable daughter to ever grace any screen (keep an eye out for JoJo Kushner). The movie predictably unfolds as we start to realize that Ostin might lose it all. But, we are asked, can she fight to keep it all? Should she?

Major spoiler alert: the movie’s ending takes the film’s premise (women can do it all!), slightly twists it on its head for a single moment… and re-establishes its accuracy by the film’s end. “It might be tough at times,” Meyers seems to tell us. “But, if you stay true to yourself, you can be the I-have-it-all kind of woman that we have finally been given the chance to become.”

But is that really the case? Can women have a great job, a balanced family life, and an overall ideal existence all at once? I think not. But… can anyone? My “no way!” has less to do with sexism and more to do with reality–it also happens to be far less of an entrapping answer than most think.

Don’t get me wrong, women (and men) should try and achieve whatever balance and goals they seek to conquer. After all, finding the right work/family balance has become America’s compulsive behavior of choice, as aided by the Lean In movement, the recent trend to dissect female comedians’ personal lives (“they must suck at relationships if they’re this good at poking fun of men”), a never ending (yet highly suspicious) debate over Planned Parenthood practices and, overall, any other subject that allows itself to be tortured into some form of archaic display and need for order and balance.

In a recent issue of New York magazine, Meyers, of female empowerment movie fame (Something’s Gotta Give, It’s Complicated, What Women Want), describes her decision to write and direct The Intern as propelled by her desire to portray the often overlooked non-romantic relationship between a man and a woman (Robert de Niro plays Hathaway’s 70-year-old intern, as part of a seniors outreach program). 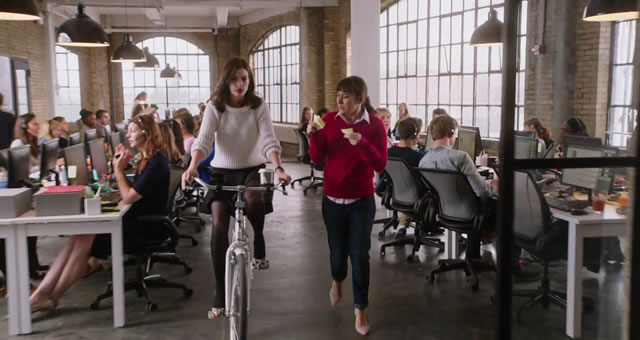 Meyers disregards the very question of female empowerment, which she seems to take for granted. “I hadn’t done a woman-workplace movie since Baby Boom, and I was so happy at how different it was,” Meyers told Amy Larocca of New York. Hathaway’s character does, in fact, have a loving relationship with her daughter and (spoiler alert) a seemingly supportive husband–in addition to her oh-so-rewarding business life.

Everything seems to be geared towards one question: can the woman who works have as successful a family life as the one who doesn’t work? I’d like to throw that right back at you, John: Can a successful businessman have as deep and as loving of a relationship with his kids as a man less focused on his job? I think not.

In The Intern, Meyers peppers the script with teasing declarations about the world’s inability to accept Ostin’s business acumen, pushing her to eventually doubt her own abilities, both as a CEO and as a mother (“Jules Standard Time” is coined by her coworkers to note her perpetual delay given her unending to-do list). But what if it’s not the environment that’s pushing Ostin to believe that she might not be able to have it all? What if the question isn’t why can men have it all but not women, but, rather, a statement: no one can have it all.

No matter the film’s ending, which I won’t entirely spoil for you but which I do think is the most unrealistic part of the movie, The Intern tends to, in essence, agree with me. I left the theater realizing that women can officially have the one thing they couldn’t have until now: a money-making, exciting, wake-up-in-a-panic-in-the-middle-of-the-night and I-can-support-my-family kind of job. Yay! We have achieved a specter of equality (I’ll leave the gender pay gap aside for just a second). But this achievement comes with the same exact price tag that has been dealt with by men until now: a different, mostly not-as-deep, connection to family. After all, everyone gets 24 hours in one day.

So, congrats. We’re just as fucked as men are.