You’ve seen it a million times in movies and on TV. A character yells, “Road trip!” and the next thing you know the fictional gang is piled into a jeep convertible, windows down and the obligatory hot blonde’s hair blowing flawlessly in the air. Comedies and clichés aside, there really is something so quintessentially American about hitting the open road and being a tourist in your own state or setting out to cross a few states off your bucket list. Unlike our favorite fictional characters, road trips can’t really be spontaneous. There tends to be a destination and planning—but how much planning? Where can you save and what can you splurge on? Is “The World’s Largest Ice Cream” really worth slamming on the breaks for?

Before the black ice—and ugh, snow—take over the roads, use up some of that vacation time that won’t roll over after Dec. 31 by taking the perfect road trip. For tips, I turned to Sophia Dembling, author of 100 Places in the USA Every Woman Should Go who admitted she’s never met a place or roadside attraction she didn’t love. 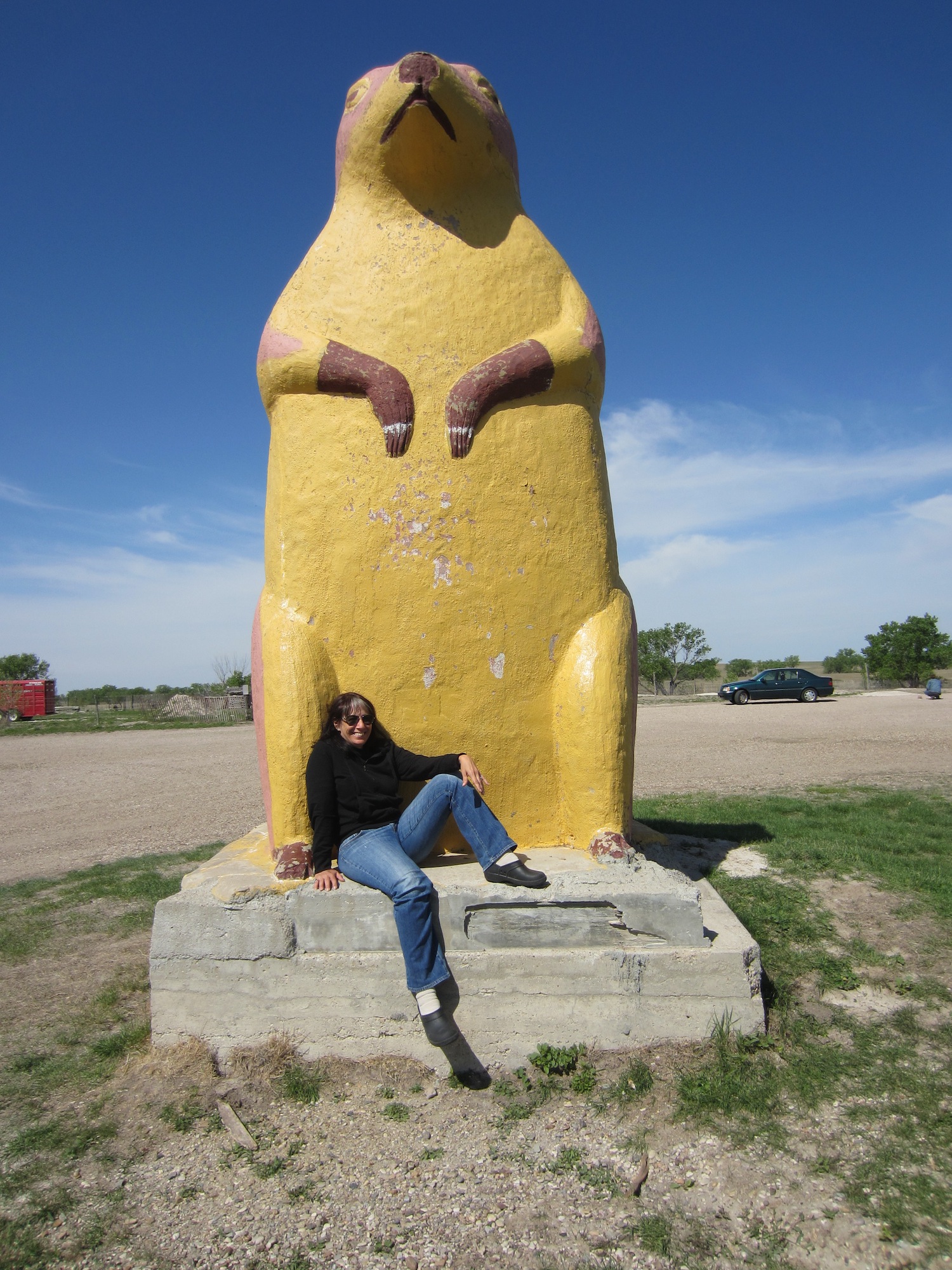 Dembling with an enormous prairie dog in South Dakota

One of the biggest mistakes people make on road trips is over-planning. Ambition is great, but leave your Type A personality at the office and live a little. “If you add the driving on top of all the planning, you’re going to end up more stressed out than if you didn’t have a vacation,” Dembling said. To strike a balance between organization and room for unexpected exploration, Dembling plans her stopping points based on how many hours per day she wants to be on the road. Then, she keeps a rough list in her mind of places she’d like to see depending on where the day takes her, but she tries to leave a lot of space for seeing a random sign for something and checking it out. “America is full of surprises,” she said. “To me, the really magical moments of a road trip are the spontaneous digressions that come along,” she said. “I will break for silly stuff and I like to leave time for that.”

Figuring Out Your Budget

Gas, hotel, food…believe it or not, the cost of a road trip can really add up after a while. “I don’t think personally in terms of my per diem as much as I think about where I can cut back and where it’s important for me to spend,” Dembling said. Think about what’s important to you when setting your budget. Do you have to stay at a nice hotel? How often are you going to eat out? For Dembling, she’s cool staying at a less-swanky hotel for one night (but nothing less than three stars on Priceline) and likes to splurge when she reaches her destination. “If my goal is to see a beautiful place, like I just did on a road trip to Rocky Mountain National Park, I want to stay in a nice place,” she said. “I want to feel comfortable relaxing there. I might like to have a balcony, that kind of stuff.” Gas is always one of Dembling’s biggest expenses, so she uses GasBuddy to find the best bargain around. As for food, Dembling eats breakfast and dinner out and opens up her Yelp app to find cheaper, local spots to hit for those meals. During the day, she snacks on food she bought from the grocery store. “One of the great things about having a car is that you’ll want to load up with food, lunch, snacks and fruit,” she said. Stick it in the cooler and rev the engine.

Unless you’re renting an RV, you likely don’t have room in your trunk for your entire wardrobe plus half your hair products. Besides, road trips are casual affairs. Take advantage of the chill vibe and make like Dembling by packing a couple pairs of jeans or shorts, shirts and yoga pants for stretching out after sitting in a car for a long time. She’s a big tea fan, so she tends to pack some herbal tea and honey to sip in her room after a long day, along with a scented candle. “If you are going budget hotels, they may smell a little funky,” she laughed. Other necessities: A first aid kit, blanket for picnicking, coffee mug, cooler, hiking gear and camp chairs in case she sees a beautiful spot and wants to sit down and hang out for a while. OK, and then there’s this for all you high-maintenance people freaking out right now: “I’ll bring maybe one nice outfit in case I want to go out one evening,” Dembling said. Breathe easy. 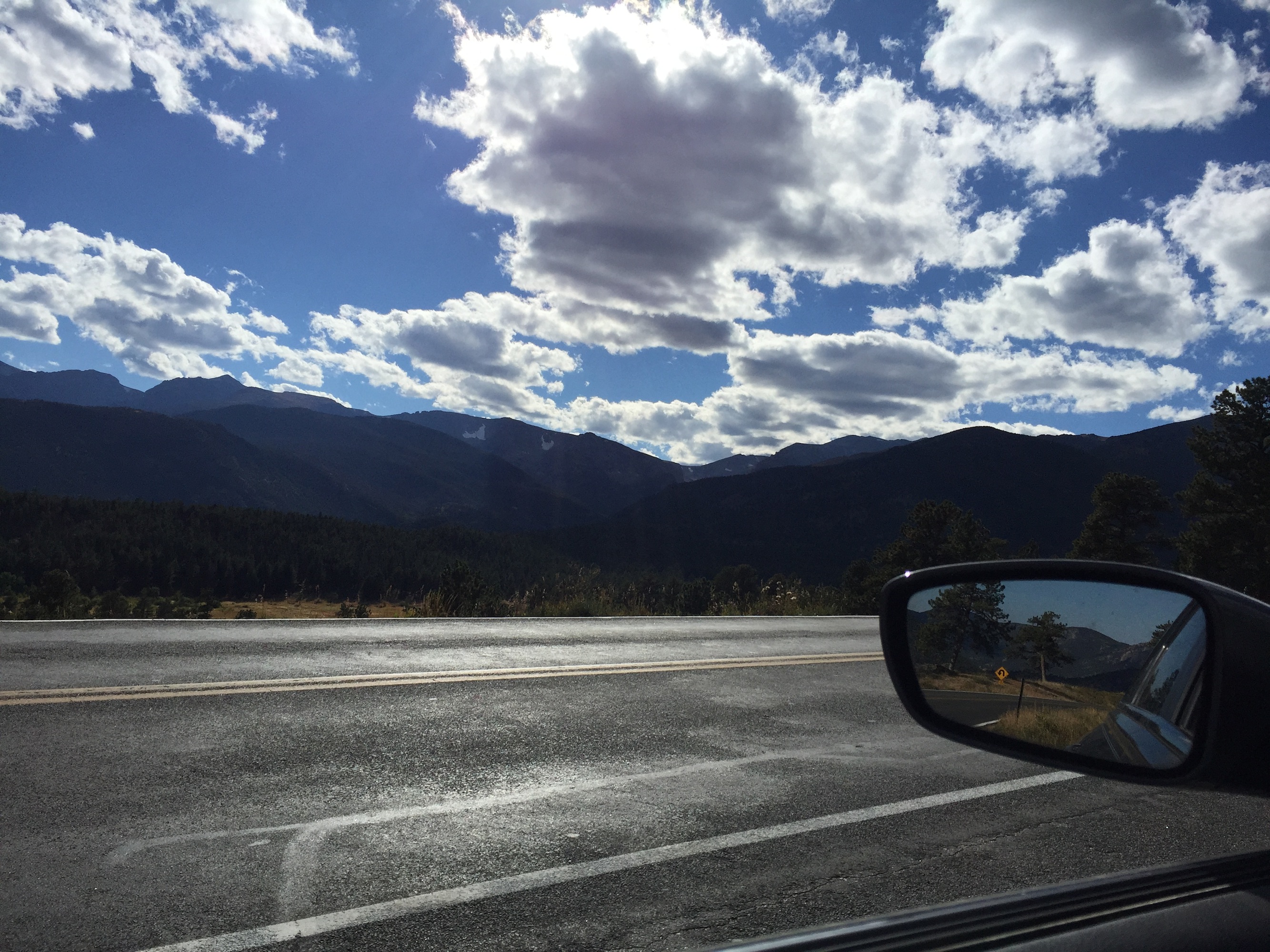 Dembling is big on podcasts when she’s driving. “I can download them so I don’t have to worry about all my data and streaming,” she said.” I also have an iPod, which is really vintage at this point.” She also loves to tune into local radio when she can find it.

A Word About Cell Phones

Ah yes, the cell phone-on-vacation issue. It always seems to come up, doesn’t it? Try not to be tied to your phone and checking your work e-mail constantly. Obviously while you’re driving, it’s a no-no, but even if you’re riding shotgun, just put it down for a while. Unless you’re a surgeon, it’s almost definitely OK. “The point of the road trip is the road and so if you’re spending too much time looking at your phone you’re missing the beauty of the trip, the way your mind wanders, seeing the beautiful countryside unfold, the geology of America,” Dembling said.

You’re having the time of your life, you have to figure out a way to remember it forever. When it comes to souvenirs, Dembling favors something she’ll use again, like mugs or unique towels. On a recent trip, the tea-enthusiast found a pretty vintage teapot to use when she has friends over. “It’s not a specific place souvenir but every time I use it I’ll think about that trip. I always gravitate towards things that have a function over things that are just fun and goofy,” she said. But she’s not above clichés, either. “I will get a T-shirt now and then for sure,” she admitted. As far as scrapbooking, Dembling prefers modern methods.  “I like Instagram a lot,” she said. ” “It’s like a scrapbook but it’s digital and not taking up room in my house.”

Sophia’s First Road Trip: Dembling’s first road trip was quite possibly the ultimate American adventure. “When I was 19 and drove from NY to California with a few friends. It was really my first time out of New York City and I was like, ‘Holy crap, look at all this,'” she said. Now, she’s hooked, taking at least one 10-day trip a year and lots of weekenders.

Sophia’s 3 Must-Take Trips: 1. Grand Canyon/Monument Valley/Four Corners “It sounds so cliché and then you see it and you’re like, ‘Oh my God,'” she said. 2. New England in the fall for foliage. 3. Coast-to-Coast “It’s the best way to get a sense of how big and diverse America is,” she said. “Watching the land change and the mountains rise and the drop down into the ocean, it’s really the best introduction into how great this country is that I can imagine.”

Sophia’s Favorite Spots: Right now, Dembling loves the prairie and has been frequenting Flint Hills in Kansas and Nebraska. “The prairie is kind of like the desert where you have to slow down to appreciate it and so for the past five years or so that’s been my particular passion,” she said. She also has spent many summers in Maine and hopes to get back there soon.