More than one hundred years ago, French literary master Marcel Proust described his fictionalized-self dipping a madeleine cake into his tea. Melancholic and worn-out by the repetitiveness of his life, Proust took a bite and suddenly his senses were jounced and he was transported back to his childhood. And from these crystalline memories, induced by a single pastry, the framework for a seven-volume novel (4,215 pages) was conceived, which inevitably would become Proust’s masterpiece: Remembrance of Things Past.

This command of food over memory has been pondered for as long as words have been written. But what is it about our olfactory system that drags us back to the kitchens of yesteryear? Rather than get scientific about it, we decided to ask some of Long Island’s most prestigious chefs to recollect how food relates to their memories. Chefs Nino Antuzzi, Tom Schaudel and Todd Jacobs unraveled a myriad of tales like a teenage trip to Chinatown, oral sex as a final meal and a tuna sausage that even a dog would scoff at. 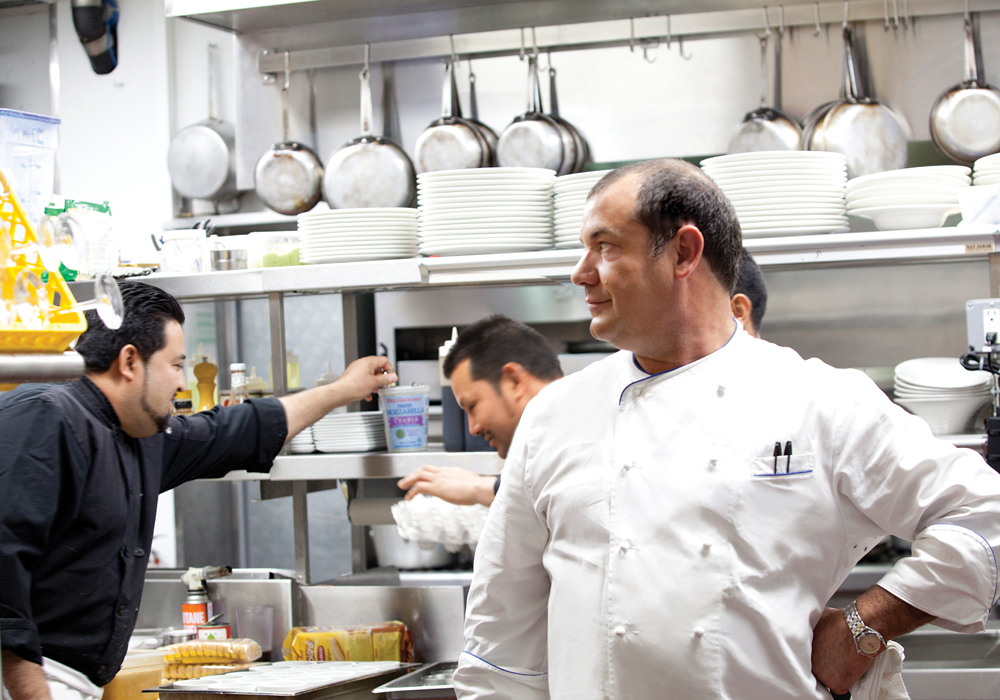 “I love to cook and it’s therapeutic. But even I still have to go to a therapist.” image: lynn spinnato

What’s the most memorable meal from your childhood?
I was 13 years old and it was in Sardinia, Italy. When I used to play soccer I would come home starving and all there was available was Pecorino cheese, tomatoes and grapes. It was delicious. There’s no words to describe this feeling. It is a feeling that is only in someone’s body. The blood has to flow. The senses come alive. The combination of the sharpness of the Pecorino cheese and the sweetness and the tartness of the tomato and the sweetness of those grapes. If I eat it now…it just sends me back. [Sighs] We all live in our memories. And now I’m remembering when I was a schoolboy…my mother used to make this chicken with green peppers: Pollo alla Romana. She would be working in the kitchen early in the morning and all day. And when we came back from school there’d be those aromas. [Takes a deep breath] Ooooh, those peppers. I can smell it all right now. And I can see my mother, too.

What would be your last supper?
[Laughs] You don’t want to hear this. [Laughs]. You promise me that you’re not going to record this. [Laughs] You see, I’m like Anthony Bourdain like when he goes to Africa and he eats something like shit from a cow. I’ve eaten everything. So I said to my girlfriend, recently, my last meal is going to be you. I’m going to start biting. And I’m going to start right between your legs. But I’m not going to eat your brains because I want you to remember what I did to you. Just like that. [Laughs] And if I do this to her it’s only because I love her and I love life. 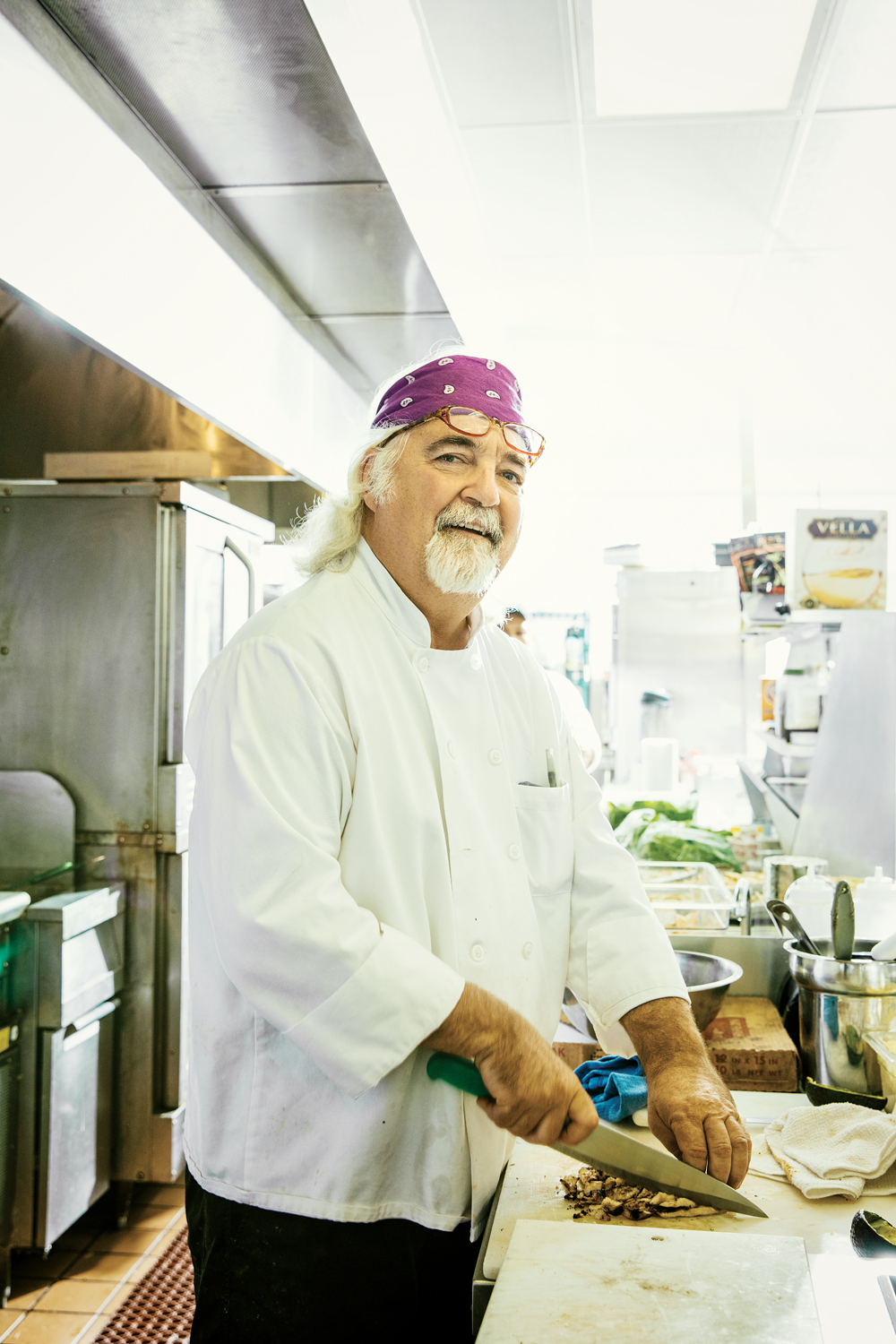 “I’m a chef probably because I’m mentally ill. I have that brain/artist thing. And I’m motivated by a clear- eyed dish and beautiful vegetables.” image: matthew furman

What’s the first meal you remember eating?
Dinner at my grandma’s house. I was three and there was this roast pork with apples, fresh carrots and spinach. She was such a great cook. And when you have something that pure and fresh it sets the bar for your palate. [Pauses] But I can still hear that hand grinder she used to grind the spinach. I can see the fresh carrots being peeled and cut. That rack of pork being oiled and salted and peppered going into the oven with that little light there. And the sense of smell is probably the most privileged in the body. It’s almost like a photograph. When I smell a lilac tree I go right back to my childhood home in Carle Place. When I smell roast pork I’m right back in my grandma’s kitchen.

Are there any failures that you can laugh about now?
Well, I’ve made things that I thought were fabulous and they have sold like shit. Anyone can talk about their successes but it’s the bombs that are funny. I did this banana guava ketchup for a mahi mahi dish and it turned out to be a complete disaster according to everyone else. I did a tuna sausage once that a friend said he wouldn’t serve to a dog. [Laughs] But you have to laugh about it. We are not saving lives here. It’s just food. Listen if you blow a meal, who cares? I’ve blown thousands and I get paid to do this. Just relax, you will have another one in six hours. 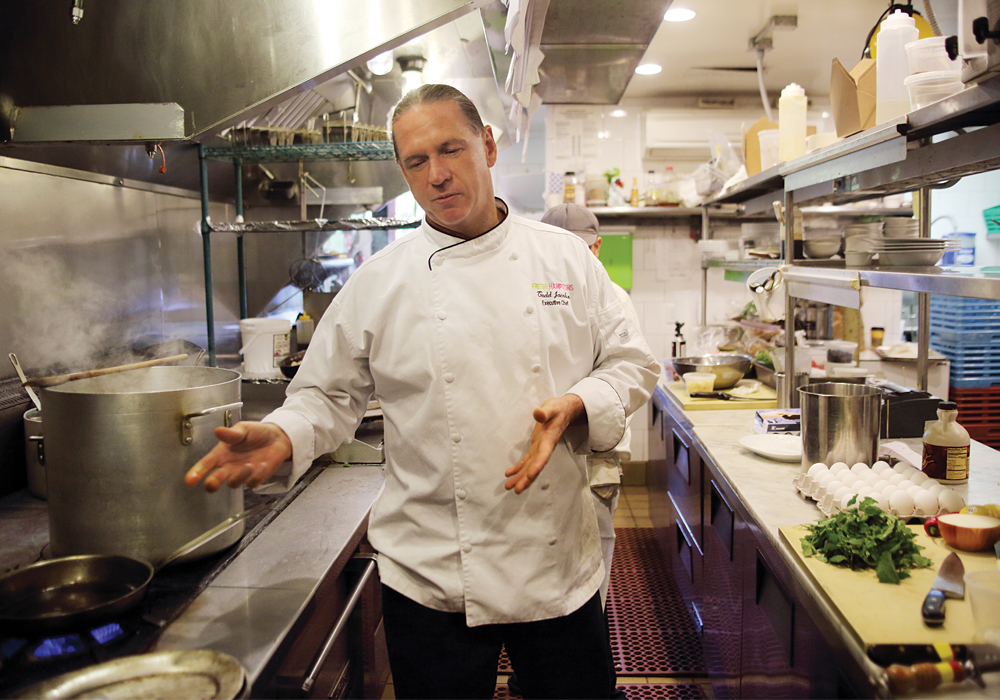 “Like any artist, writer, you go through periods where you’re thinking ‘I’m not making any new dishes.’” image: lynn spinnato

Can you recall when something you ate had an impact on your life?
I was about 13. I took a trip to Chinatown with my best friend and his family and tasted vegetables for the first time. My mom hates when I tell this story. [Laughs] But I grew up on those blocks of frozen Bird’s Eye vegetables. I mean, I used to gag on string beans. I remember coming home and saying to my mom, “Vegetables are amazing. What are you doing to them?” I started cooking pretty much right after that because my mom was like, “I work and take care of the house. You want fresh vegetables, then make them yourself.”

Is there a defining moment for you as a chef?
It was when this old Frenchman, a maître d, said to me, “Why do you do this? You don’t get paid any extra to run around and collect fresh, local vegetables. How does it benefit you?” So I said to him one of my best childhood memories is of my grandmother. She was born in 1897 and grew up on a farm in West Virginia. She used to tell me about how to milk a cow, and how they had to churn butter and there was no refrigeration. They had an iceman that delivered a block of ice. All these great stories. And I thought it was so interesting. But then I thought: What am I going to be telling my grandchildren? That I remember when they use to grow food in the ground? It was just horrifying. I’m going to do whatever I can to make sure that doesn’t happen. I’m going to make sure my kitchen comes alive with the freshest ingredients available.