There’s an unparalleled liberty in embracing “comfort food,” because food is comfort. My personal gateway was bacon. Once aligned to the pork slab, I was searching incessantly for anything topped, wrapped or stuffed with some sultry strips of swine. But I quickly learned an important lesson in scouring Long Island’s shores for the most innovative ways to indulge: it’s a simple feat to eat bad, but the quest to find the best bad proved much tougher.

There are rules. This lifestyle initially requires practice, conditioning. It also requires a consenting guide. Our local favorites are filled with sin, capable of inspiring even diehards to ignore the calorie count. Their menus are completely free of restricting terms like “fat-free” or, for that matter, -free anything. 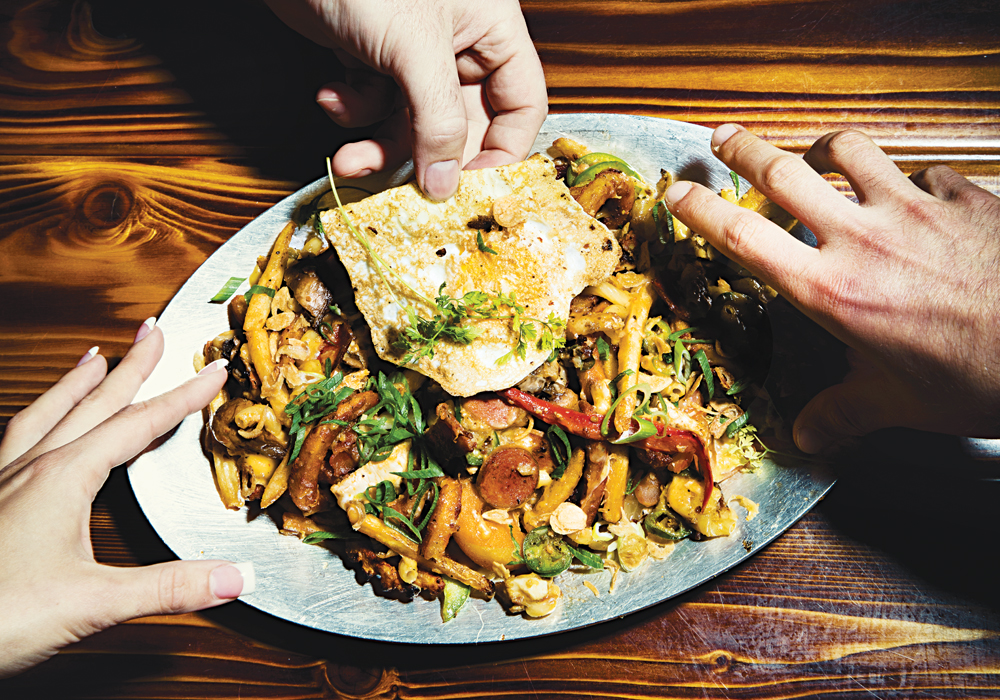 Its name may suggest something unsightly, but this multi-meated mountain of mess has effectively started a new culinary trend: haute hobo! We’re kidding, but seriously—few local concoctions peak curiosity and provide more fun for bare-fisted late-night snacking than BBD’s engrossing (not gross), platter of garbage fries.

The contents constantly change, though it’s guaranteed to contain a caramelized meat hodgepodge: sweet Italian sausage, bratwurst, ham, bacon or “any experimental charcuterie we’re messing with at the moment,” Perrazzo explained. (Chunks of hot dogs and gyro meat were encountered during two recent visits.) The remainder may include fried onions, cheese scraps, tortilla chips or sliced peppers, which always join four types of fries tossed in a spicy, vinegary butter sauce deriving from a spot in the kitchen now designated to accumulate scraps. 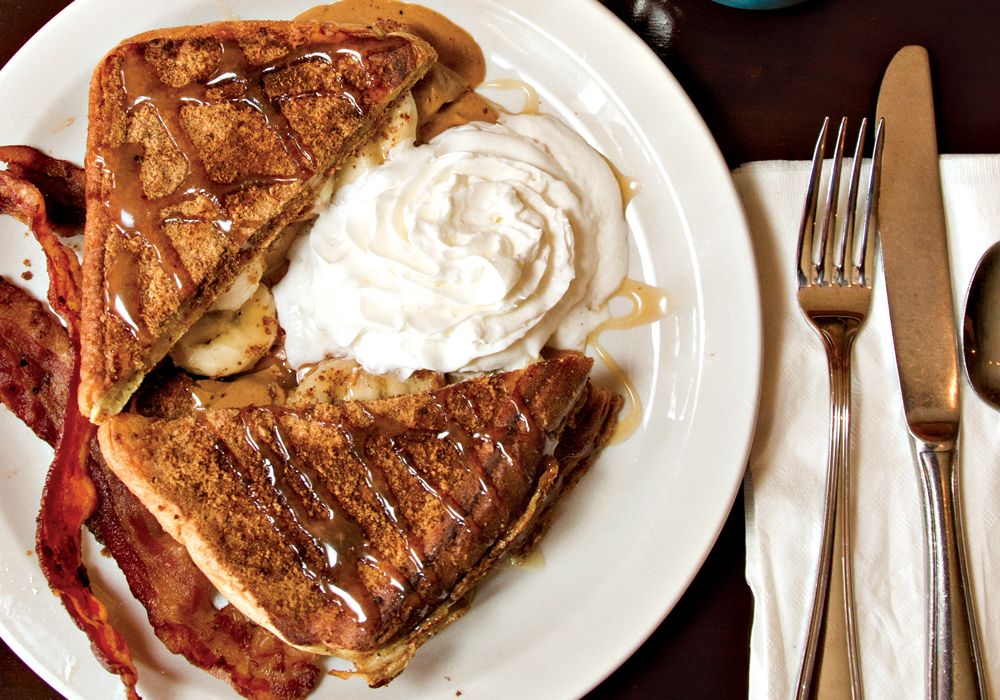 This must-munch item at Terry Scarlatos’ popular morning-to-late-night eatery (a second opening in Patchogue soon), is only available during breakfast. It was inspired by a nostalgic customer attempting to create a version of Elvis Presley’s favorite sandwich in the form of French toast. “We had a French toast with peanut butter and apple on our menu a few years ago and he would always substitute the apple for banana,” recalled Scarlatos. “He came in three times a week for it. And every time he’d tell us he’d been eating Elvis Presley sandwiches since he was a kid.” 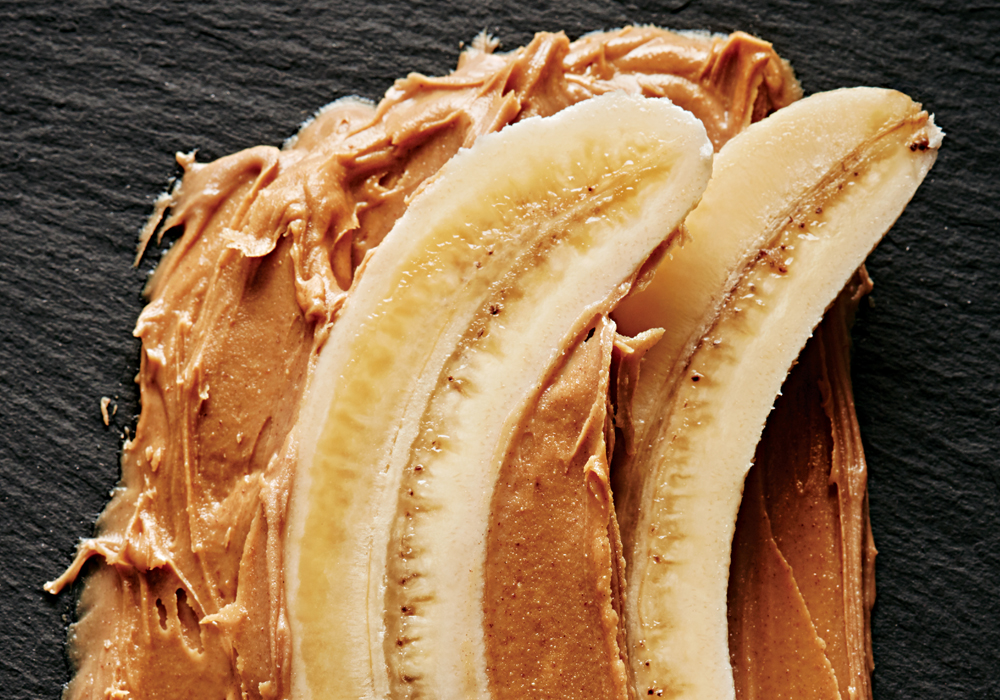 The customer would also ask for graham crackers to dunk into his coffee—which swiftly became the new, decadent dish’s crust. Its preparation starts by shortly soaking two slabs of brioche in a cinnamon-egg wash before dipping one side of each into a pile of cracker crumbs. After grilling the pair until gorgeously browned, the studded wedges are smothered in peanut butter, covered with sliced bananas and combined to form a relentlessly sweet sandwich. A snowstorm of powdered sugar is added, followed by crisscrossings of caramel sauce. “Good luck eating lunch after this one,” Scarlatos laughed. 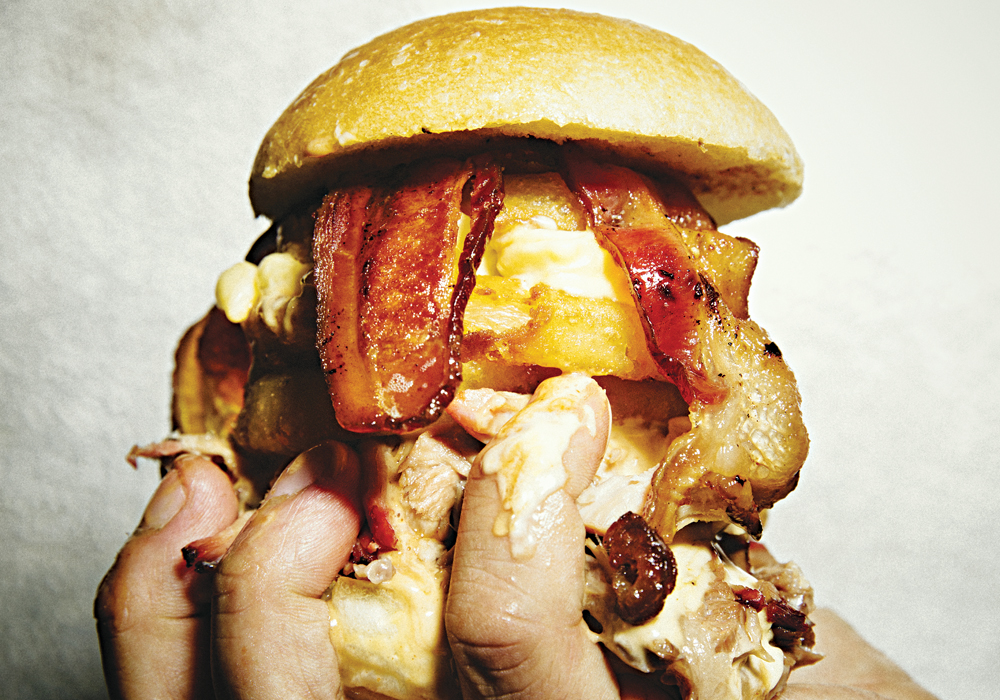 There are plenty of sinfully delicious items to devour at Patrick Gaeta’s pork-centric palace on the corner of Sound and North Wading River Roads, but the best option for comfort-food fiends is the heart attack, a messy, nourishing sandwich inspired by the co-owner and executive chef’s full-time profession as an x-ray technician. (His partner Michael Troyan also works in the medical field as a physician’s assistant.)

Gaeta’s title rightfully transforms into MD, for meat doctor, once the small, boxy storefront opens between Friday and Sunday and 500-ish pounds of animal are smoked over four types of wood. The space often jammed with customers gleefully attempting to thwart the heart attack alongside rotating sides like fried pickles and bacon-wrapped jalapenos stuffed with brisket and cream cheese. It’s a difficult, attention-demanding challenge: ingredients immediately start falling from all sides of the squishy roll made nearby at B&M Prestano Bakery in Rocky Point. 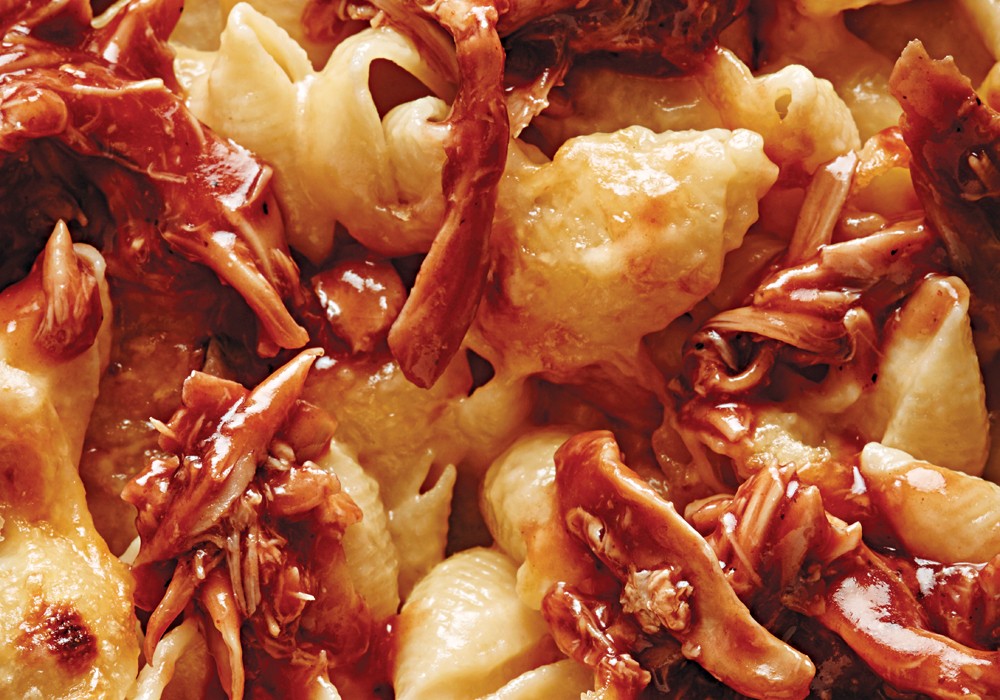 Its non-bread base is formed with thick, uneven slices of brisket—smoky, juicy meat coexisting with savory fat. A pudgy pile of hand-pulled pork smothered in a tangy vinegar sauce is tossed atop and followed by cheesy macaroni shells, onion rings and strips of house-cured bacon. “If I had to describe it, it has sweet, spicy, smoky, cheesy greatness in each bite,” Gaeta explained. “But that’s if you can actually get an appropriate bite of it. Sometimes I wish I could unhinge my jaw before eating it.” 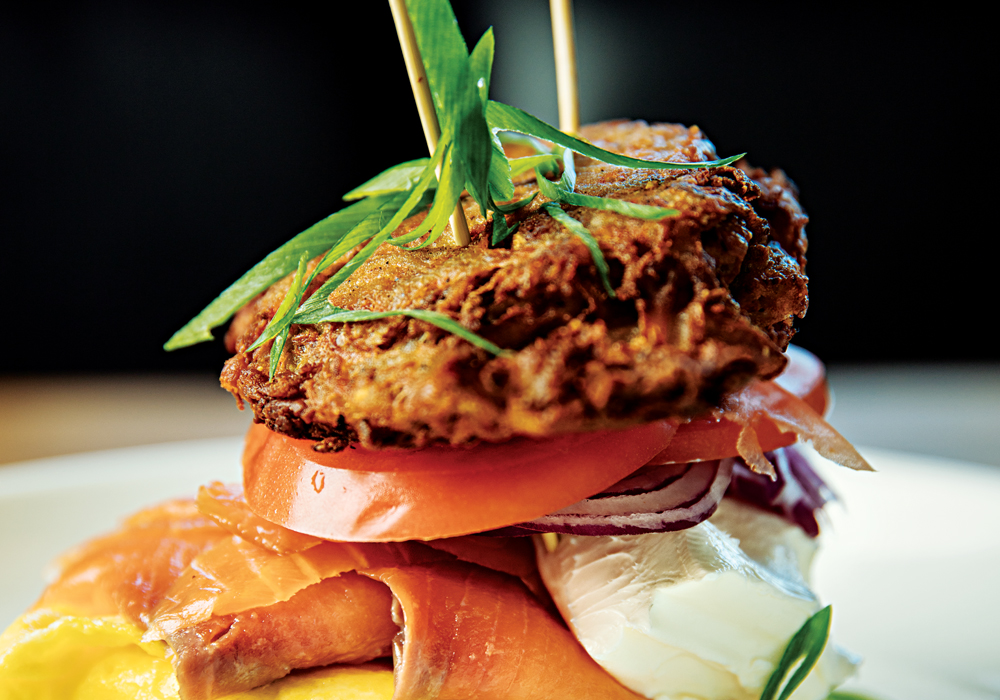 In this church of comfort food frequented by devout gastronauts across Nassau County, Chris Randell is pastor of the well-fed parish. While many of the California-bred chef’s culinary sermons invoke both the sanctified spirits of satisfying appetite and self-indulgence, his most inspired gourmet gospel occurs on weekend mornings with the restaurant’s zealot-making breakfast.

The menu, compiled with what Randell explained as “fun, homey stuff that my wife and kids need to approve,” offers pancakes filled with Oreo fragments and a youthful interpretation of Roscoe’s House of Chicken and Waffles’ titular dish—topped with eggs sunny-side-up. 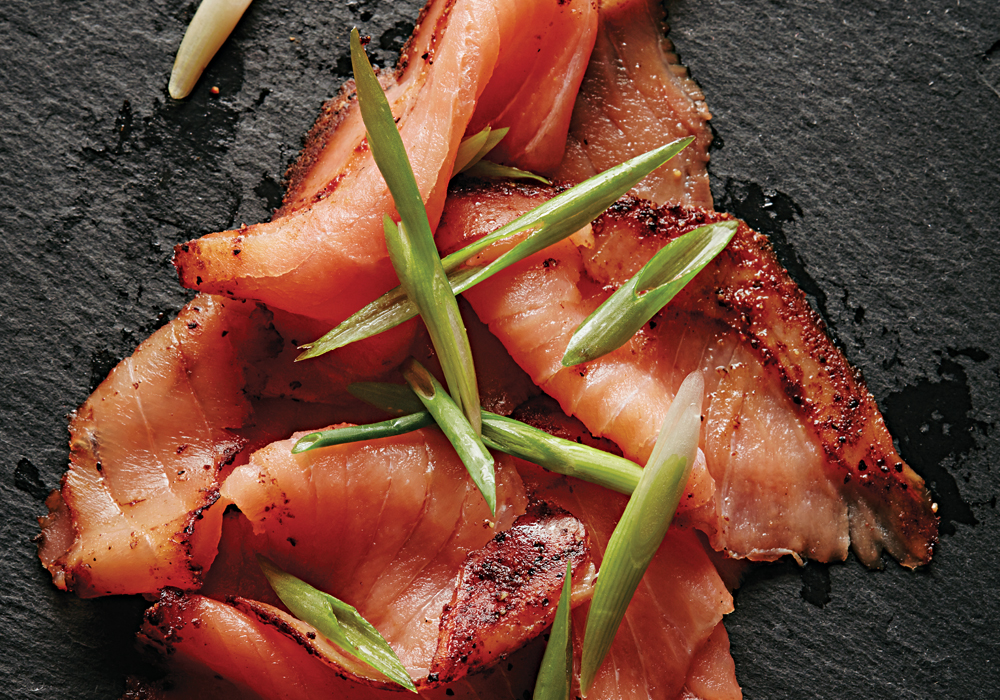 Another particularly playful item worthy of prayer, ahem, praise appears in the form of the temple burger: a stout seven-inch stack of fun sandwiched between two thick, crunchy, greasy latkes. Its contents include moist, smoked salmon; a fluffy trio of folded, scrambled eggs; slices of tomato and onion; scallion; and a generous schmear of cream cheese. (A pair of skewers is unapologetically jabbed into its innards for structural integrity.) “I have a mixed faith marriage so the obvious food rules, sacrifices and recipes that go along with knowing the Jewish religion and culture have always led to lighthearted banter about food…Keeping bagels fresh and reliable at breakfast would prove difficult. We substituted some potato pancakes and alas, this mitzvah was born.