Strapped by harsh reparations and collective psychological damage, Germany was in shambles after World War I. In the mid to late 1920s, post-war Berlin, under the democratic Weimar Republic, rapidly reinvented itself as the hub of European modernity. Stodgy ideas of power, wealth and authoritarianism, as well as traditional artistic forms, were called into question. This rebellious spirit found expression in new forms of music, art and culture.

As Weimar artists began to experiment by delving into figurative abstraction, surrealism and Dadaism, traditionalists pushed back. And it wasn’t long before this spark of the “Neue” was extinguished when the republic collapsed under Nazi rule in 1933. Cast aside as frivolous and vulgar, this important era of art reveals the fractured psychology of a war-torn nation. It was this vulnerability and confusion that enabled Hitler to manipulate an entire country and impose his ideologies. 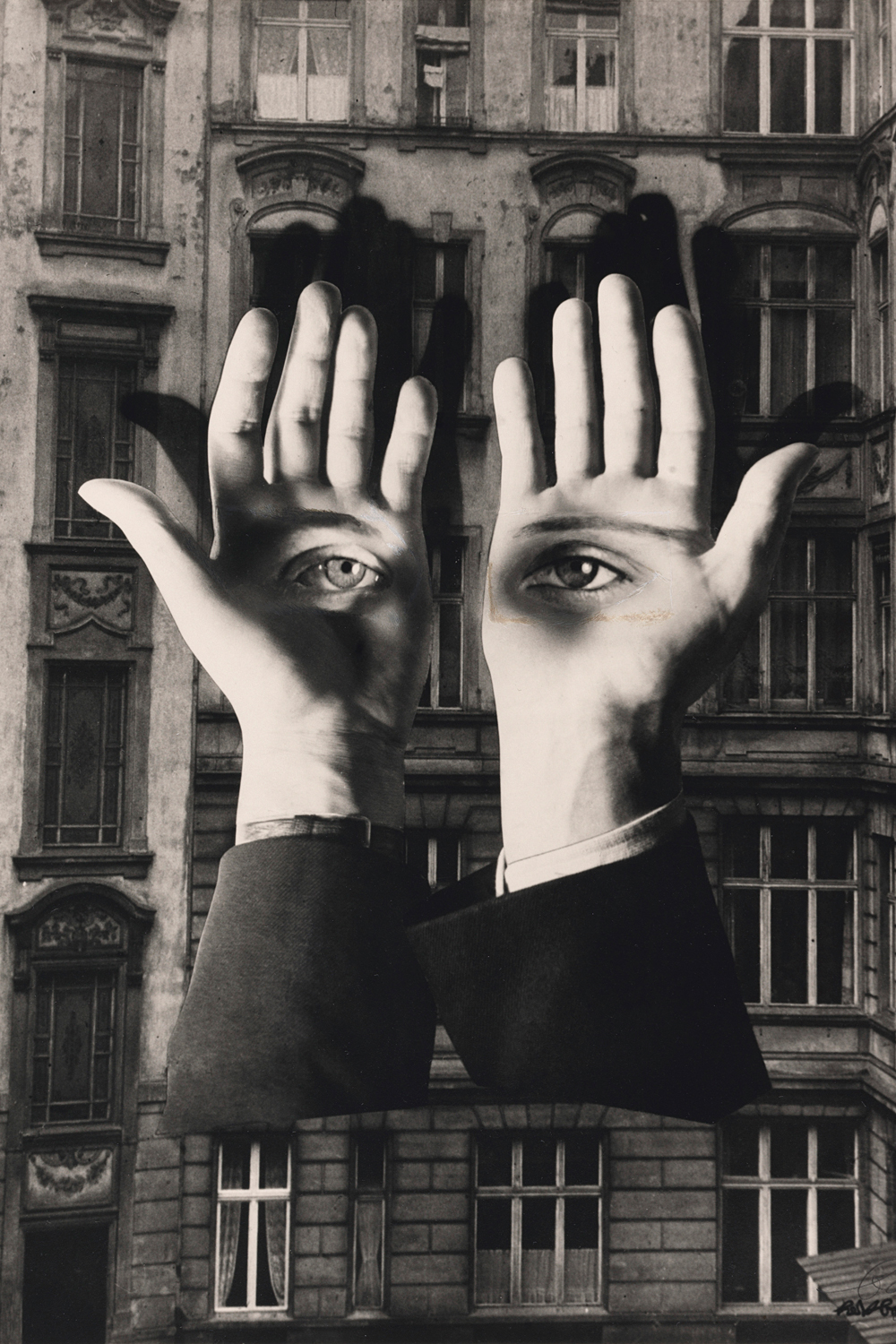 While the exhibit features propaganda posters, sculpture and photography from the period, it is the paintings that capture Germany’s creative hysteria post-World War I. Ludwig Meidner’s “I and the City” (oil on canvas, 1913), evokes the anxiety of Edvard Munch’s iconic “Scream.” In the foreground a twisted, tortured self-portrait with gnarled fingers claws at his face as Berlin lies in jagged, charcoal ruins. Grotesque buildings on fire jut out at odd angles. Broad, loose brushstrokes composed with a simple palette suggest the chaos of the time.

George Grosz explores Picasso’s cubism through his “Panorama (Down with Liebknecht)” (pen, ink and watercolor on paper, 1919). Bright watercolors and vibrant figures on Grosz’s canvas are slightly more optimistic than Meidner’s Berlin however, that sense of disorder is no less important with this work depicting ghostly hand drawn faces that zigzag over each other. Front and center, a nude woman poses provocatively while a city rife with anger implodes in
the backdrop.

Grosz’s “Diabolo Player” (pen, ink and watercolor on paper, 1920) has a sparser, more contemplative feel. A lone figure is deconstructed in three-dimensional space with his body configured at awkward angles. Situated in a room of boxes, jagged lines and geometric furniture, the composition is arranged in a sandy kaleidoscope of soft tans and browns. The result is both disconcerting and meditative, although the mise-en-scène is hallucinogenic. 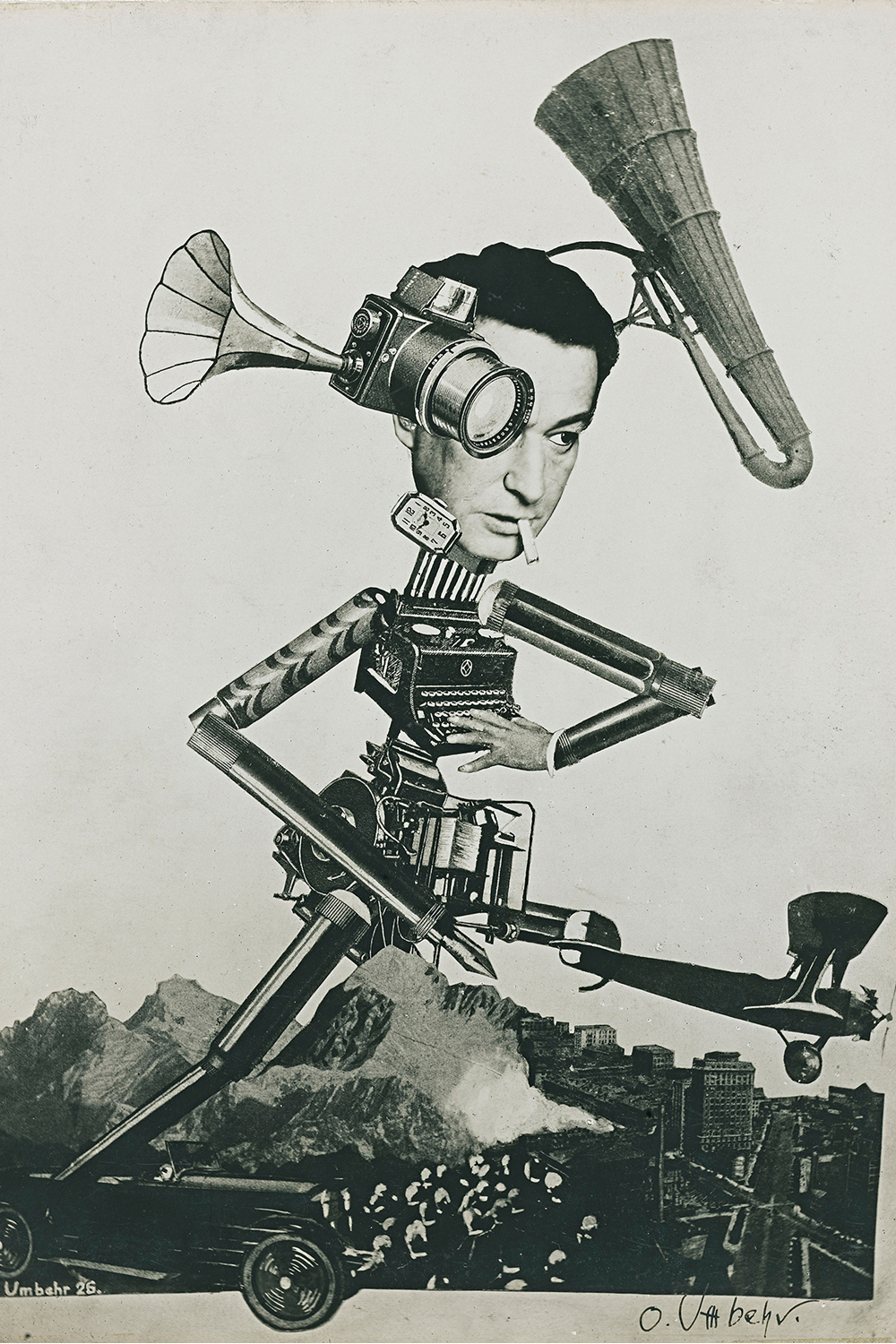 Umbo (nee Otto Umbehr) speaks to the Weimar Republic’s insistent push for modernity with his twisted, steampunk collage: “The Racing Reporter” (photomontage, vintage gelatin silver print, 1920). A slick, stern journalist (think Cary Grant) is pieced together like a twisted stick figure: a gramophone and camera are stuck to his head, a typewriter for a body and cars and planes for legs and feet.

Umbo has created a Frankenstein’s monster that defines the age where rapid advances in technology were just starting to become weapons of freedom.

Berlin Metropolis: 1918-1933 will be on display at Neue Galerie New York through Jan 4. For more info visit neuegalerie.org