The many palaces, outstanding museums, excellent cuisine and high-quality shopping make Vienna the perfect European city experience. Still, surprisingly few New Yorkers have made it to the center of Europe to explore what was once the capital of a vast empire and seat of the most powerful government in the world. Astonishing though it may seem, the Austro-Hungarian Empire existed until less than one hundred years ago. Its imperial legacy rendered Vienna one of the world’s most beautiful cities—an intimate place, yet one endowed with a cultural patrimony worthy of any metropolis many times larger.

Vienna is surrounded by a roughly circular boulevard known as the Ring. This thoroughfare and the grand buildings lining it were built in 1865 after the defense walls were torn down to free up land for construction of civil planning that had expanded far beyond those walls many years before. Emperor Franz Josef decreed that the Ring be a showplace for a series of palaces to create the most impressive collection of buildings in Europe. It remains so 150 years later. 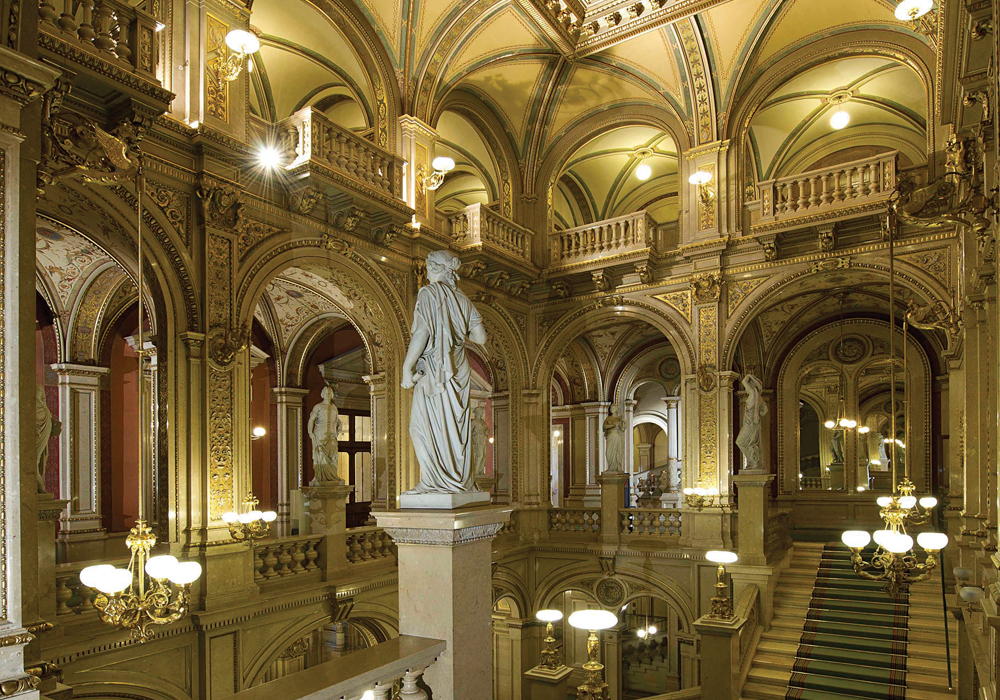 The buildings themselves were styled to embody their purpose through the architectural styles selected. The Austrian Parliament therefore, was built in ancient Greek style to symbolize the Greek roots of democracy and the Vienna Opera House was constructed in an Italian Renaissance style to reflect the origins of opera. The main building of the University of Vienna is also located on the Ring, in a beautiful renaissance building designed by Viennese architect Heinrich von Ferstel, whose Palais Ferstel and Freyung Passage inside it are among Vienna’s most elegant indoor public spaces. Both within and beyond The Ring, Vienna retains a peerless grandeur of European history and complements it with a forward-thinking populace, outstanding restaurants, and cutting-edge art exhibits, the latter often held in the very same historic edifices that give the city its exquisite aesthetic.

Vienna’s imperial past encompasses many cultures, which is why Viennese cuisine today offers a surprising diversity of flavors, not to mention spectacular venues in which to enjoy them. One of those is the Kunsthistorisches Museum, Vienna’s Museum of Fine Arts where each Thursday night dinner is served under a soaring dome. The so-called Dinner at the Museum is wildly popular with well-heeled locals, who enjoy having the museum all to themselves after normal opening hours for strolls amid the art between courses.

Dining in palatial surroundings is also enjoyed at Schönbrunn Palace, the beautiful imperial summer residence located in Vienna’s Hietzing district. On an enormous estate, the equally enormous palace is the venue for an Evening At Schönbrunn, where a private tour of the palace, dinner at the palace bistro and a concert in the Orangerie are all part of the package. Schönbrunn, like the splendid Upper and Lower Belvedere palaces outside the Ring, is an anomaly for visitors to Vienna who find the lion’s share of sights, activities and restaurants within the boulevard that girdles the city center. 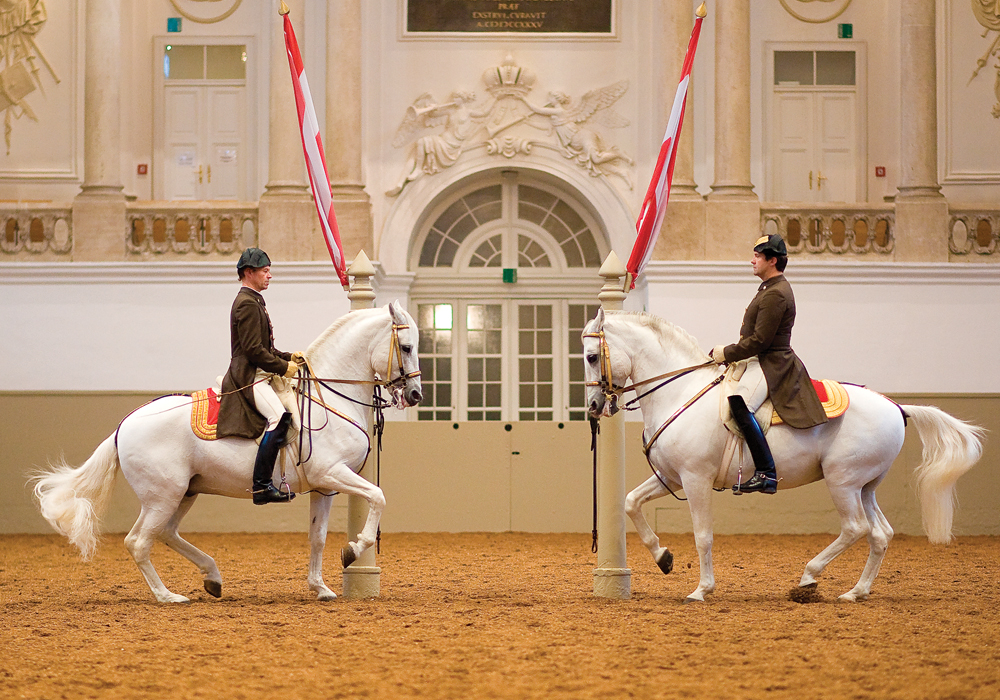 Abutting the southern rim of the Ring are the grounds of the Hofburg, the most prominent of Vienna’s imperial palaces, which extend toward the very heart of the Old City and encompass the Imperial Apartments, the impressive Prunksaal National Library and several other museums. The most avidly attended of all the Hofburg’s attractions is the Spanish Riding School, which this year celebrated its 450th anniversary. Equestrian enthusiasts are certainly familiar with this classic display of horsemanship held in what ranks as one of the most elegant riding arenas in the world. A stop at nearby Demel before or after the performance will reveal another glimpse into the imperial past, this one happily taking the form of delicious cakes and pastries as well as the many coffees for which Vienna’s coffeehouses are renowned.

With winter descending upon the northern hemisphere, the question, “Vienna? Now?” may be in order. But the answer is decidedly, “yes.” The city is famous for magnificent balls held in various palaces during a season of celebrations that begins with the Red Cross Ball in November and ends with Life Ball in May; the highest concentration of soirées takes place during the last week of January and the first two weeks of February. The balls began as social evenings for members of individual guilds and still carry names such as the Confectioners’ Ball and the Coffeebrewers’ Ball.

There are many other glamorous events held in palaces and other sumptuous venues around the city, including the Fête Imperiale in the arena of the Spanish Riding School, Le Grand Ball held on New Year’s Eve at the Imperial Palace and the world-famous Viennese Opera Ball at the Opera House, where the floor is transformed into an extravagant dining and dance hall.

The Rudolfina Redoute is a masked ball in the traditional style, but Life Ball certainly is not. One of the biggest charity fundraisers in Europe, the fantasy Life Ball is an uninhibited party drawing the likes of former US president Bill Clinton, Hollywood stars such as Sharon Stone and others dedicated to raising funds for various causes by attending a party like no other. Like the elegant Concordia Ball, Life Ball takes place in the imposing neo-Gothic City Hall, one of the Ring’s most impressive structures.

Where to Stay and How to Get There

Stay: The Exquisite Hotel Imperial
The most opulent hotel in a most opulent city, Hotel Imperial was built to be the private palace of Prince Philip of Württemberg in 1863. As would be expected of a palace, it is an impressive place with grand salons and a ceremonial staircase that would not look out of place in any of Vienna’s sumptuous museums. The prince did not have long to enjoy his magnificent home however; the place was sold only ten years later and became a hotel for the World Exposition of 1873. Visitors to Vienna looking for exceptional accommodations have been thankful ever since.

Having recently undergone extensive renovations, Hotel Imperial’s public rooms on the ground floor have been smartly refreshed with modern elements that complement the historical atmosphere without detracting from its impact. A grand central hall now known as the 1873 HalleNsalon serves as a (much brighter) bar and relaxation area just behind the marble lobby where guests first enter the building.

Also renewed are the dining facilities, including the new OPUS restaurant where outstanding dinners are paired with excellent Austrian wines in a chic, contemporary environment just steps from the Vienna Music Association concert hall, located directly behind the hotel. The restaurant’s name is a salute to the music world, whose conductors and composers often stay at the Imperial and whose patrons enjoy a fine dining experience at OPUS before continuing their evening with a concert across the way.

Valuable antique furniture and art pieces are found throughout the hotel, which has been a favored meeting point for leaders of Vienna’s political, social, artistic and commercial circles for as long as it has been open to the public. The hotel’s Café Imperial maintains Vienna’s reputation as a café society where coffee is venerated as much as the hotel’s signature Imperial Torte, a delicious concoction of cake, marzipan and chocolate made by hand that can be shipped anywhere in the world.

Getting There: VIP At VIE
Vienna Airport’s VIP Terminal sets a benchmark for expedited arrivals and departures in one of the world’s most convenient airports. Just as Vienna transforms itself from repository of European history to modern global city, Vienna Airport is making a similar move to serve the sophisticated traveler of the 21st-century in high style and accentuated efficiency with an ultra private VIP Terminal.

No doubt government officials, corporate executives and wealthy families appreciate the discretion and proficiency of the VIP Terminal staff. An emissary is sent to meet travelers right off the plane and whisk them to a separate building where immigration procedures take place in private and baggage tags (if traveling commercial) are passed on to a guest services manager for retrieval of any luggage. The spacious lounges are private living rooms where passengers can relax upon arrival or before departure; departing passengers simply head to one of these private lounges while staff handle check-in, procuring boarding passes and checking baggage as necessary on behalf of the client. The newly updated business class service of Austrian Airlines can be enjoyed on nonstop flights from JFK to Vienna before reaching the services of the VIP Terminal.