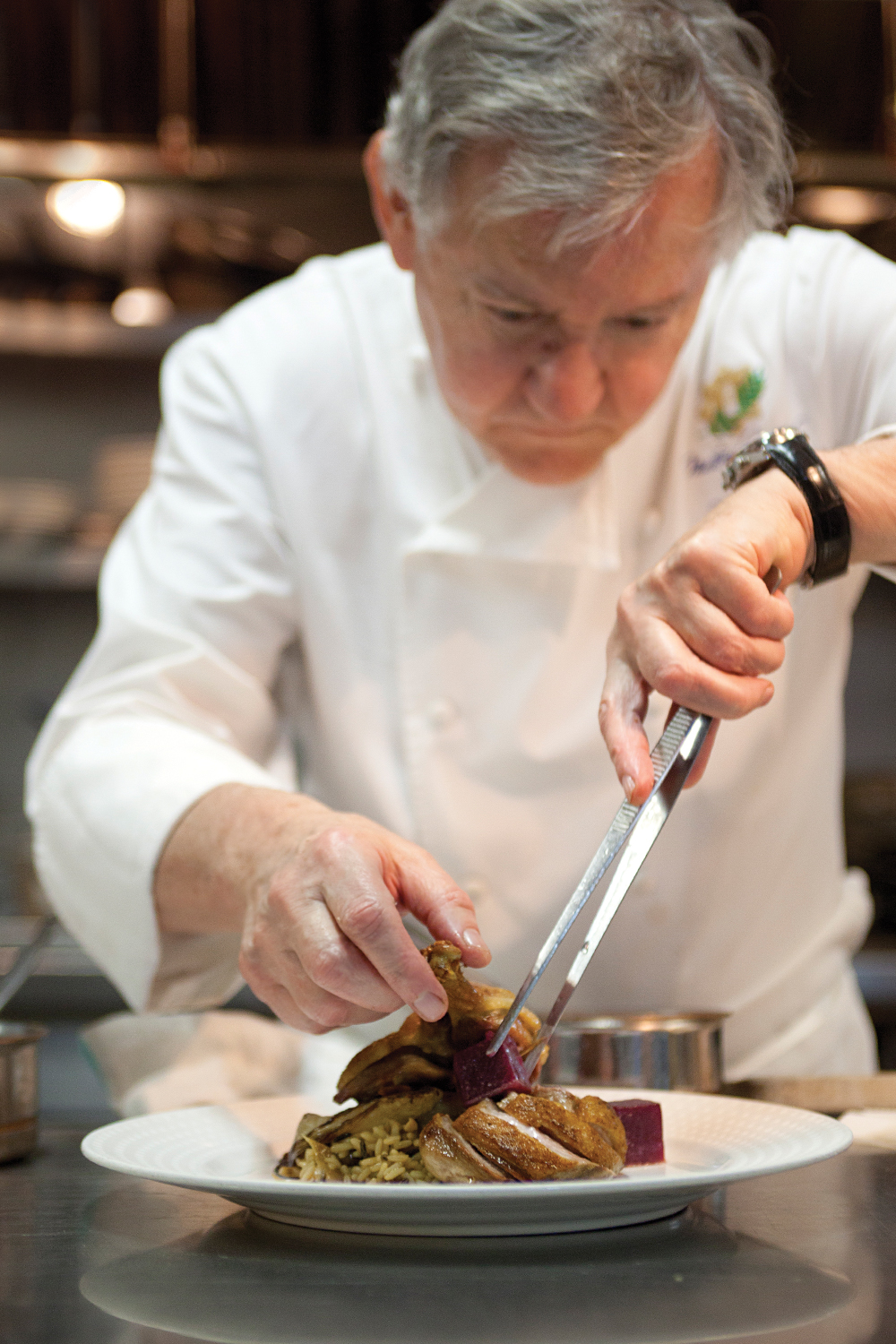 In his kitchen, Guy Reuge is the calm amidst a sea of chefs’ whites working centrally among various stations. And that tradition of cool follows his protégés into their own restaurants. image: lynn spinnato

On television, “reality” series often depict head chefs as high profile, arrogant know-it-alls screaming at staff until they’re crying in their beef Wellingtons. Most have come to believe that professional kitchens are bastions of fast-paced, high-energy stress. But chef Guy Reuge breaks that stereotype. At his farm-to-table Mirabelle in Stony Brook, he’s thought of as a teacher, not a tyrant.

Since arriving on our shores from France more than 40 years ago, Reuge has earned numerous James Beard nominations, countless culinary accolades and a slew of editorial coverage. But he credits his passion for tutoring young cooks as one of the most exciting aspects of his career. “As I had mentors in my youth, today the role is reversed. I find myself in the midst of young people that aspire to become chefs. I love to teach and communicate my knowledge to them. Their success is my success.”

And their success is far-reaching. Chefs working everywhere from Long Island to Los Angeles to Beijing launched their careers under his tutelage.

“It’s not because of his flagship restaurant or because of his French cooking background, Guy just loves what he does,” said Eric Werner, the most recent graduate of Mirabelle, now head chef at Lessing’s new Cold Spring Harbor restaurant, Sandbar. Reuge taught Werner that “food has to make sense, and damn good sense! It needs to be balanced.”

Reuge’s openness and quiet humor helps build his rapport with his protégés. The creative culinary duo behind Mosaic in Saint James, Tate Morris and Jonathan Contes, credit his democratic attitude with jumpstarting their careers. “Guy has always been a breath of fresh air…He’s understanding in an industry that doesn’t often allow for it. We were given so much creative freedom. Freedom to create and be responsible for your own specials as a line cook was unheard of,” said Contes. Morris added, “It’s a style unique to Guy. His kitchen works differently. Not only were we allowed to voice our opinions, but our opinions really mattered.”

Perhaps that’s Reuge’s biggest impact on young talent—how they run their kitchens. “Guy has taught me to be open-minded to the talents of people. Your employees are not just switches that can either be turned on or off. They are dimmer switches with a myriad of talents and experience to offer,” explained Paolo Fontana, chef and owner of the SCGP Cafe. Fontana, who transformed from waiter to chef at Mirabelle, said he applies what he learned from Reuge on a daily basis. “Guy has taught me that there is humility in ingredients; that there is power in technique, and if you respect the preservation of your craft, that it’s easy to align yourself with your guests.”

Contes and Morris similarly credit Reuge with inspiring the food philosophy at Mosaic. “At Mirabelle it was engrained in us that good ingredients made good food. We sourced from our own small garden and brought the best, most beautiful product into our dishes…It was just the way the best restaurant on Long Island was run,” said Morris.

Mirabelle continues to please palates with Reuge’s guidance at the helm. But the real treasure may be in his culinary lineage finding its way into kitchens across the region. “Managing a kitchen is complex and takes time to learn. Managing people is a great part of it,” he said. “Our system of education through great cooking schools and the quality of the restaurants in America will continue to give birth to talented young chefs. I’m very grateful to be a part of it.