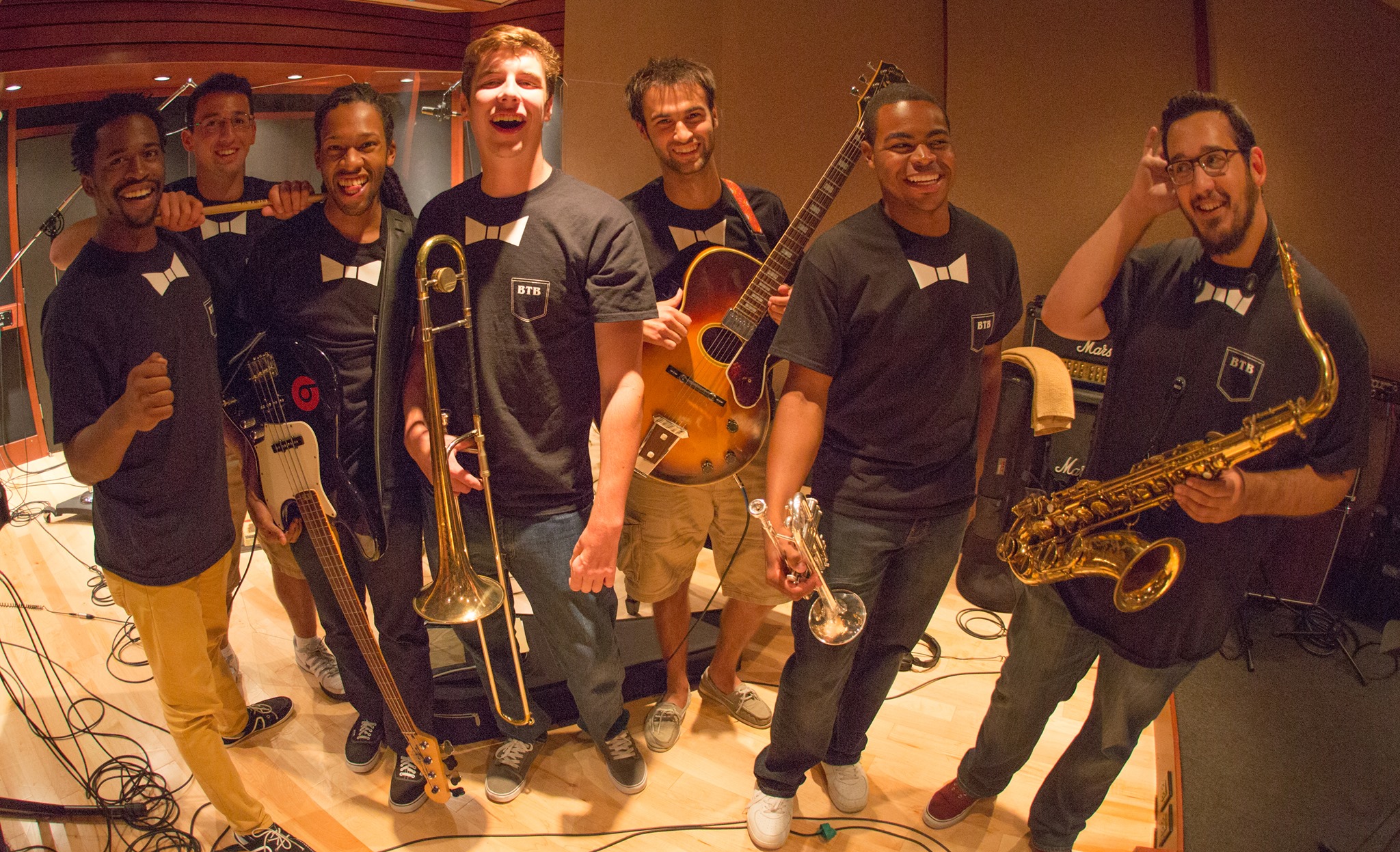 Stevie Wonder, Lettuce, Herbie Hancock, Freddie Hubbard and Bruno Mars are just some of the musicians covered by Long Island-based jazz-funk group Black Tie Brass. Founded in 2013 by trombonist Ryan McNulty, Black Tie Brass is capable of morphing from a jazz duo, trio or quartet to a 7-piece funk band depending on the style of the gig. The horn-driven collaborative includes elements of jazz, funk, R&B, soul, hip-hop and pop.

BTB—trombonist Ryan McNulty, MIke Alvarez on tenor saxophone, Jason Reese on keys, Al Marino on guitar, Charles Jourdan on bass, Randolph Smith on trumpet and Glenn Chiarrello on drums—is currently working on albums with a number of artists including (pop artist) Nick Tangorra, a’Mericana and Sal Valentinetti. The Brass invite you to celebrate their second anniversary when they perform their last show of the year at Club Groove in NYC on Saturday, November 28th. Expect to hear everything from powerful horns to soulful R&B and funk “all wrapped up in a jazz improvisation.”

Long Island Pulse: What music were you exposed to growing up? Who are your biggest influences?
Ryan McNulty: My parents played a lot of Stevie Wonder, Billy Joel, Bruce Springsteen and musicals. I remember seeing a lot of Broadway shows as a kid and that combination of imagery with music, how the music enhances the acting, really left a big imprint on me. My biggest musical influences would be Snarky Puppy, Charles Mingus, Fred Wesley, Robert Glasper, Miles Davis and many others. So many great musicians have influenced us and helped to create our signature style.

Pulse: How did you get the name Black Tie Brass?
RM: We were brainstorming names for this group and trying to find something classy and new. We used to constantly dress in suits and some of us wore bow ties. So we combined our horn-led sound with our dressing style.

Pulse: Does the group’s improvisation make each performance unique?
RM: It is a constant dialogue on stage whether it’s verbal, or through our instruments, or even with hand signals. We might play the same tune each night but, depending on the emotions of the room or the band, it’s never the same. Everyone leaves it all out there on the stage. We play the same way for ten people as we do for ten thousand. 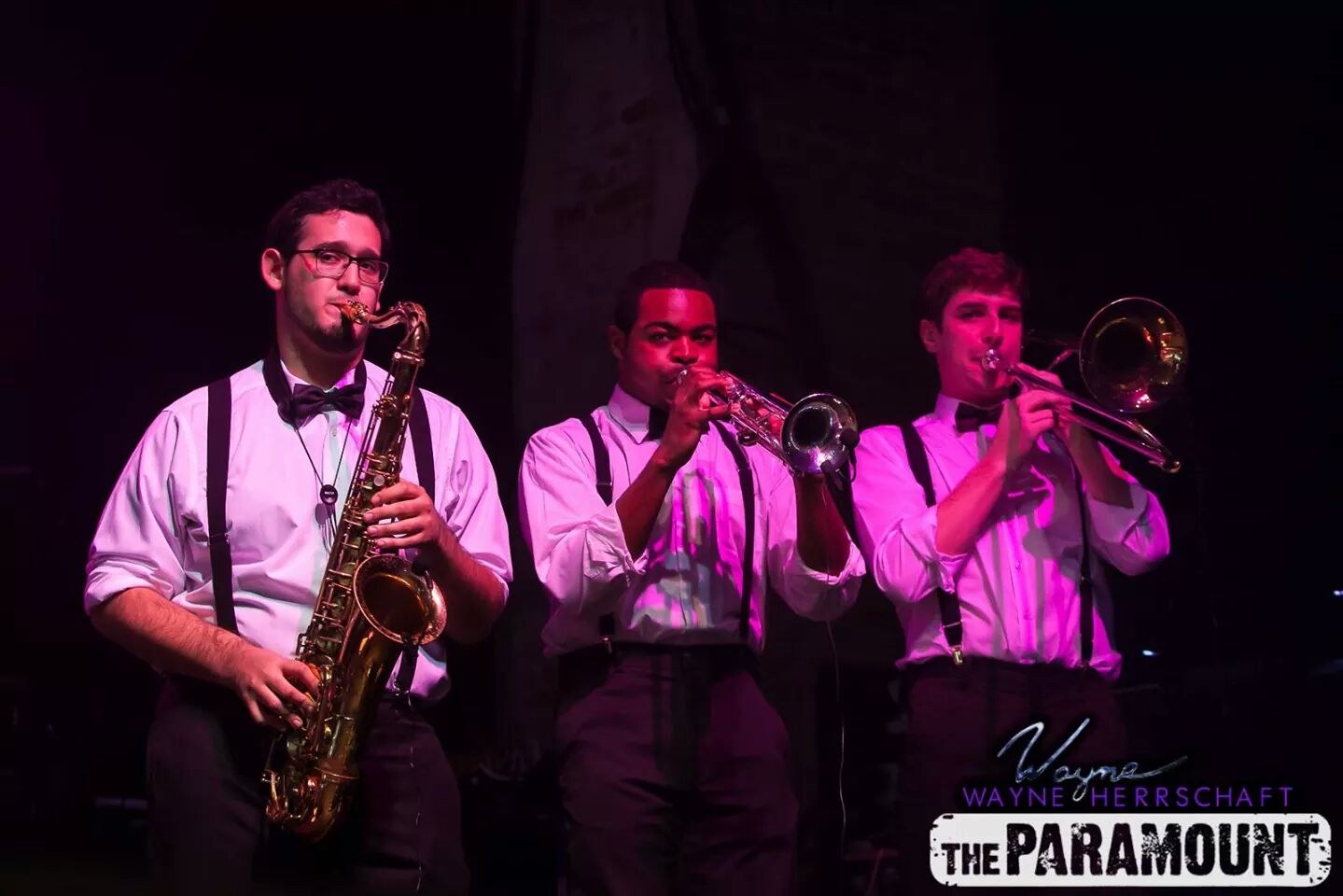 Pulse: What artists have you worked with in the studio? Are there both covers and originals on your debut record?
RM: We have worked with Dylan Hartigan, a’Mericana, Sal Valentinetti, Christina Kay, and Nick Tangorra. We’re in the middle of releasing three Disney covers with Christina Kay on vocals. I wrote four originals for our debut record and there were two covers: ‘Butterfly’ by Herbie Hancock and ‘The Chicken’ by Pee Wee Ellis.

Pulse: What are the demographics of your audience like—mainly jazz enthusiasts?
RM: Our demographic is actually shocking. We have such a wide range of people that it is astonishing to say the least. It goes from teenagers who like all the artists we play with to couples that have been married 60+ years and have heard all the jazz greats. It’s truly incredible and a testament to playing good music with great musicianship. If you have that, it doesn’t matter what you play, people will like it.