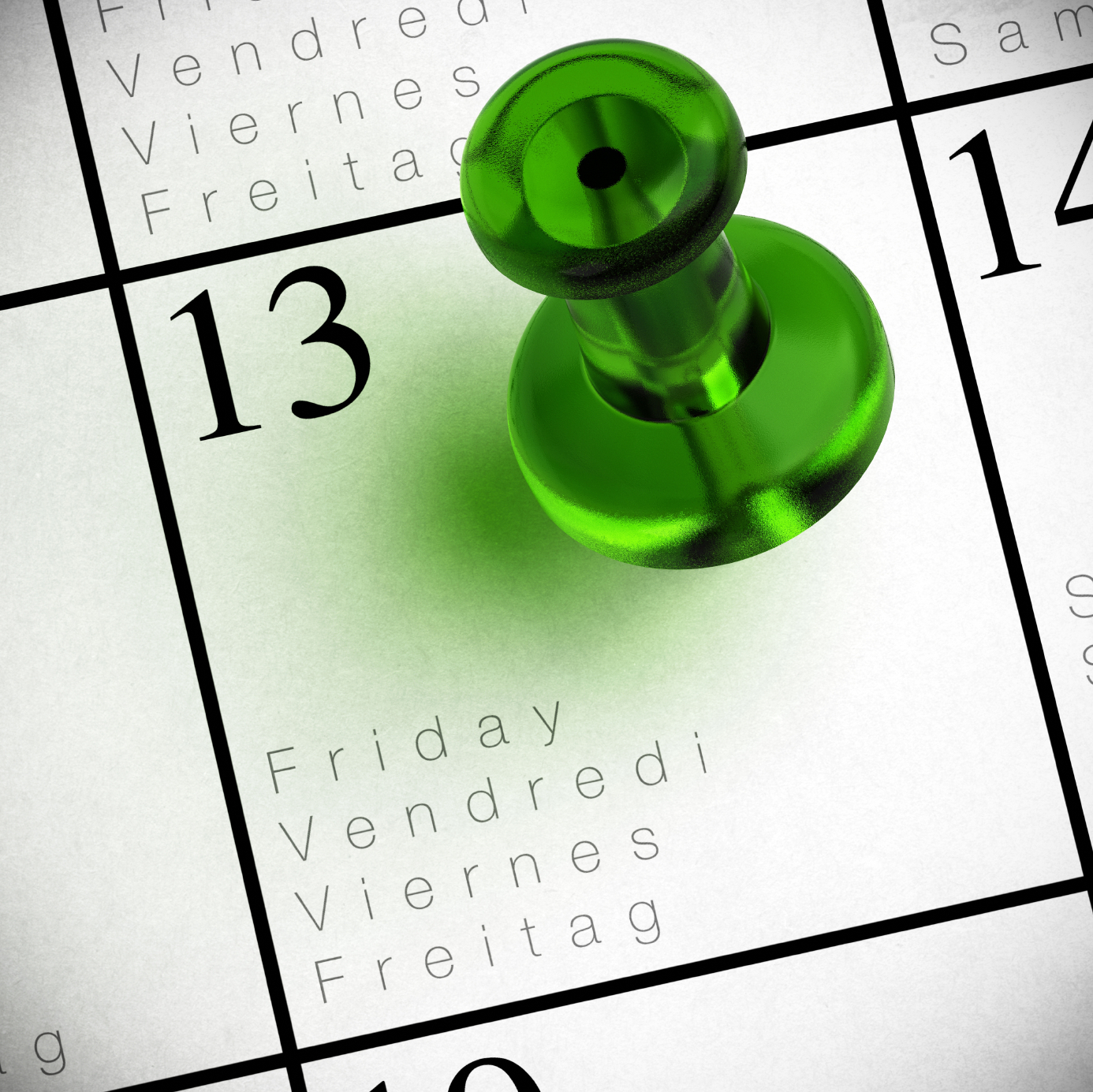 If you’re reading this, congratulations. You’ve made it to the third and final Friday the 13th of 2015. It’s no small feat. Three is the maximum number of times we can have a Friday the 13th in a calendar year. To help you win the small talk game at the water cooler today at work, I searched the Internet for fun facts about the Black Friday that doesn’t involve sweet discounts. Consider this your Friday the 13th history lesson and guide. Good luck.

Friday the 13th History Lesson: It’s hard to pinpoint exactly when Friday the 13th got its unenviable reputation, but superstitions about the number 13 go back to around 1772 BC when the number was left out of Babylon’s Code of Hammurabi. It didn’t help that 13 people dined together during Jesus’s Last Supper, spawning the myth that if 13 people dine together one will die within a year. How many people did you invite over for Thanksgiving again?

Revenge Tactic?: Thirteen is kind of the red-headed stepchild of numbers. There are 12 months in a year, 12 hours on a clock, 12 tribes of Israel, 12 Apostles of Jesus, 12 Descendants of Muhammad Imams, 12 gods of Olympus…it’s no wonder 13 has had to seek other ways to make its presence known.

Damage Control: In 1881, an organization called the Thirteen Club tried to better the number’s reputation. The original 13 members walked under ladders to enter a room covered with spilled salt prior to the first meeting. The club lasted many years, and five U.S. Presidents found time to be a part of it: Chester Arthur, Grover Cleveland, Benjamin Harrison, William McKinley and Theodore Roosevelt.

Unlucky Impact: Club Thirteen’s mission wasn’t really accomplished. People refuse to fly on an airplane, leave the house, invest money or even get out of bed on Friday the 13th. “It’s been estimated that [in the U.S] $800 or $900 million is lost in business on this day because people will not fly or do business they would normally do,” said Donald Dossey, founder of the Stress Management Center and Phobia Institute in Asheville, North Carolina. Dossey believes that 17 to 21 million people in the U.S. fear Friday the 13th, a phobia that can give them anything from a little anxiety to full-blown panic attacks. Some stock traders blamed Black Monday in 1987 on the fact that there were three Friday the 13ths that year.

Pro Tip: If you don’t suffer from paraskevidekatriaphobia, the name for a fear of Friday the 13th, consider booking a flight for Friday the 13th. It tends to be one of the cheapest days to fly all year.

Deciphering the Calendar: Any month that begins on a Sunday has a Friday the 13th and every calendar year contains at least one. There are two scenarios that give us the max of three unlucky days: a common year starting on a Thursday (like 2015) means the 13th will fall on a Friday in February, March and November and a leap year starting on a Sunday calls for sheer panic in January, April and July. The longest span we can go without having a Friday the 13th is 14 months. Look forward to that stretch from July 2018 through September 2019.

Other Cultures: Tuesday and 13 are both considered unlucky in Greece, so Tuesday the 13th  is just as bad. This stems in part from the fact that Constantinople fell on a Tuesday in 1453. The sum of that year? 1+4+5+3=13. Yikes.

The Spanish are also wary of Tuesday, not Friday, the 13th. 1453 wasn’t a banner year in Spain, either. The Byzantine Empire surrendered to the Muslims on a Tuesday the 13th of 1453. The film Friday the 13th was renamed Martes 13 when translated to Spanish.

Similarly, the Italians changed the 2000 flick Shriek If You Know What I Did Last Friday the Thirteenth to Shriek – Hai impegni per venerdì 17 because Friday the 17th is their day of bad luck. The number 17 in Roman numerals is XVII which, when shuffled, can read VIXI (“I have lived,” which implies death in present tense and is considered an omen of bad luck). The Italians actually used to like the number 13, but us Americans have begun to strike fear in them.

Unlucky 14th: Fans of the Friday the 13th series will have to wait a little longer for Jason Vorhees and his mask to return. The 14th flick in the installment was pushed from May 13, 2016 to Jan. 13, 2017 last month, marking the third time the film’s premiere date has been delayed.