Sometimes a blank canvas can be both a blessing and curse. When designer Crystal Photiou of CP Interiors was tasked with decorating a completely bare new home, she knew she had her work cut out for her. “We started from the ground up. The rooms were completely empty and devoid of any detail,” Photiou said. Her clients had recently moved into the one-floor ranch in Oyster Bay Cove to simplify their living situation after their daughters had flown the nest. The house had an ideal floor plan, but seriously lacked any architectural elements or character. “We really had to build in the [visual] interest,” she said.

First, the homeowners worked with an architect to add structural details to the space. Then they turned to Photiou to dress the home from top to bottom. The formal living room especially required careful consideration, as it is the first area guests see when they enter through the front door. “It really needed to be indicative of what the rest of the house looks like. And it needed to be more ‘picture perfect,’” she said.

But even this more ceremonious living area has to occasionally pull double duty. The homeowners, who have one daughter away at college and another living in Manhattan, requested a space be made for them to hang out when they visit to avoid fights over the remote in the family room. “The furniture had to be comfortable, but it had to look formal,” Photiou said. “It had to do both of those things, which sometimes can be a little bit tough.” 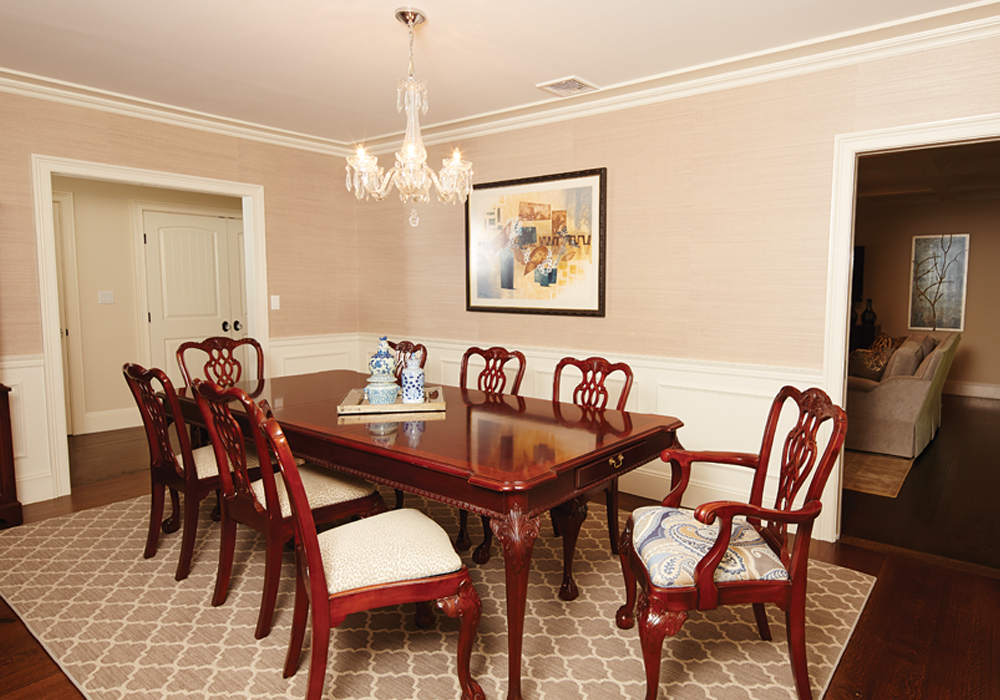 The solution came from the fabrics. The soft, velvet upholstery on the couches is comfortable enough to stretch out on, but the silhouette is formal. The patterns on the pillows and rug also bridge the gap—Greek key is a traditional print, but its clean, graphic look feels fresh. Even the custom draperies are refined without feeling stuffy. “The fabric is silk, trimmed in draped bullion, but not in a prissy way. It’s on a structured cornice. It’s a way of doing formal window treatments that’s not too old school,” Photiou said.

In the connecting formal dining room, the clients wanted to keep their set of table and chairs, which feature a more classical design. To update the look Photiou reupholstered the seats in fun fabrics, the side chairs in a subtle light leopard print and the head chairs in a paisley that matches the window cornice. “It gave it a twist that you didn’t expect,” Photiou said.

Another surprise element is the grass cloth on the dining room walls. While the bottom third of the room is trimmed in wainscoting, the upper walls are lightly textured—yet another casual take on a formal setting. Even the rug beneath the dining table straddles the line between traditional and trendy.

The Moroccan motif is ages old, but is currently on-trend in an oversized variation. According to Photiou, “That’s how you reintroduce something that’s been around forever, is to tweak it in some way.”