This 2015-16 winter is already shaping up to be a record breaker. If current trends continue, it will go on to surpass the unprecedented El Niño of 1997-98. Some regions of the continent will see above-average precipitation while other parts will become the meteorological equivalent of beef jerky—tough and dry. This year more than ever, picking the right spot for winter vacation could mean the difference between a lackluster trip or an epic ski adventure talked about for decades.

Best of the East: Stowe 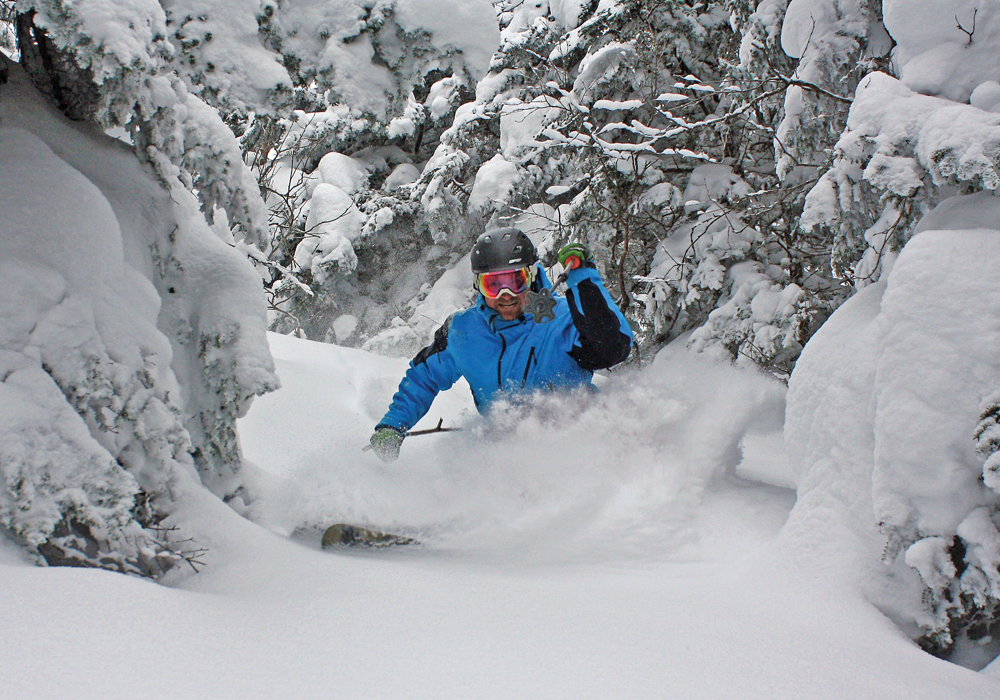 Stowe is a backcountry skier’s dream. Scale the mountain, traverse the glades and enjoy the trails where only the bold dare go. image: stowe mountain resort

Quaint Stowe in Vermont offers the complete package: a quintessential New England village (complete with a white-steepled community church) and the world-renowned Stowe Mountain Resort, which boasts more than 300 inches of average annual snowfall on the slopes of Mount Mansfield, the state’s highest peak. Don’t skip out on riding the Fourrunner Quad and eye- balling the Front Four—Starr, Liftline, National, and Goat—Stowe’s infamous quartet of double black-diamond runs. Hit them up right after a big snowfall when their 36 degree-steep of double- fall-line skiing are at their most forgiving.

Runs such as Ridge View from the Octagon and Sterling from the summit of Spruce Peak offer some of the resort’s best cruisers. Stowe also offers impressive sidecountry and backcountry terrain. From the glades accessible via the Kitchen Wall traverse to runs such as Hourglass Chute near the summit of Mount Mansfield. The Hourglass can be found above the Cliff House at the top of the gondola, but be warned: more than one skier has discovered having to scale the mountain on all fours to get to the peak. Hourglass can be pretty easy to find using maps and local knowledge; ask around about the conditions and bring proper equipment (hiking boots may be necessary). For added adventure, explore the secret stashes off Chin Clip that dump you into Smugglers’ Notch. Keep pointing downhill, all the tree shots lead to Route 108. Note: these are serious runs in genuine alpine terrain beyond the reach of ski patrol. Avalanche danger and other hazards can exist. 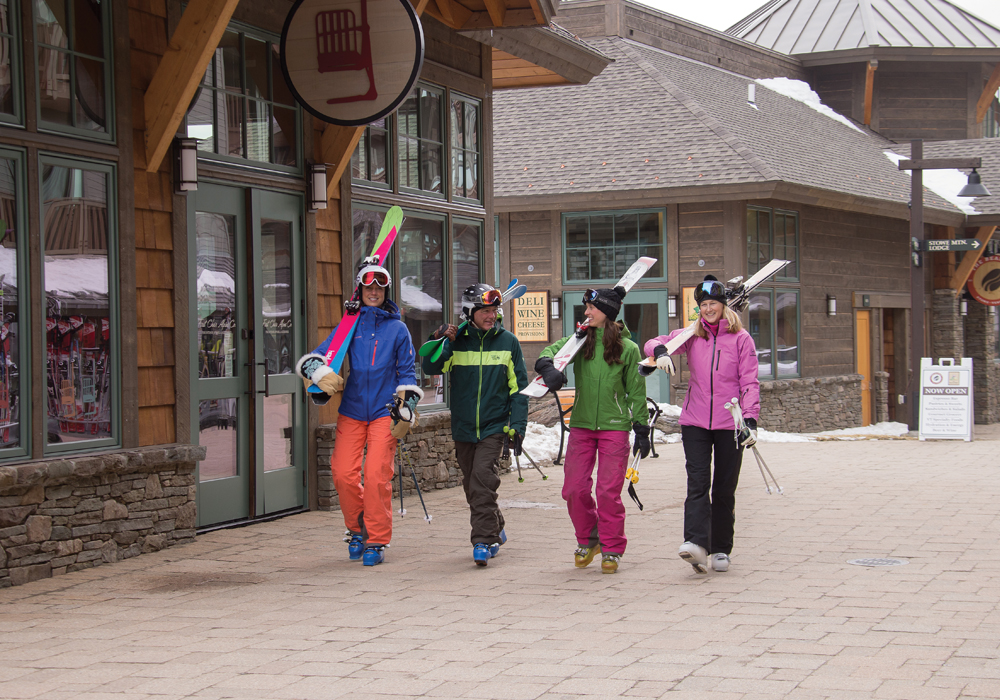 Après Ski (4/4)
For an impressive 65 years, the Matterhorn—located along Mountain Road, which connects the Stowe village with the mountain resort—has been the rowdy anchor of Stowe’s après ski scene, complete with live music at night. And with all due respect to authentic New York pizza, don’t miss Stowe’s Piecasso Pizzeria & Lounge. It’s more than once been named one of the top places in the country to grab a slice.

Stay (4/4)
For luxury, slopeside accommodations, Stowe Mountain Lodge is in the center of it all. Ask for a room with a Mount Mansfield or Spruce Peak view. Off mountain, the historic Green Mountain Inn on Main Street dates to 1833 and has welcomed guests that include US presidents. Recent renovations uphold the Inn’s appeal to modern-day travelers.

Play (3/4)
Rent and strap on a pair of snowshoes to romp along the snow-covered trails of the Trapp Family Lodge property. For the record, yes, that’s the von Trapp family of The Sound of Music fame. Or let winter-loving animals do the work, with either a horse-drawn sleigh ride through Vermont’s winter wonderland with Sterling Mountain Farm Carriage or via dogsledding with a team of enthusiastic huskies with Umiak Outdoor Outfitters. Fully embrace the cold with a tour of the Ben & Jerry’s ice cream factory just down the road in Waterbury.

Best of the West: Telluride 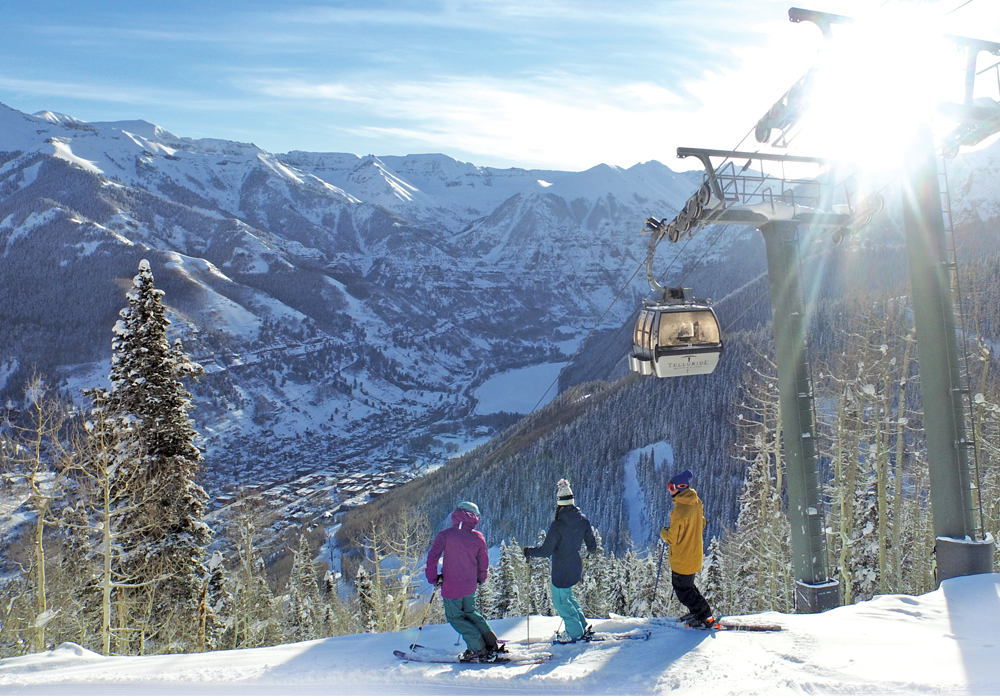 An El Niño winter typically means the American Southwest enjoys a steady pipe- line of moisture-laden storms, especially at higher elevations. That’s why Telluride Ski Resort is the best bet. Located in the rugged, soaring San Juan Mountains of southwestern Colorado, it combines prime position for El Niño storm systems with high altitude and a cooler continental climate that kick its 300+ inches of average annual snowfall into overdrive. Plus, new for this winter, Telluride adds nonstop service from New York’s LaGuardia Airport direct into Telluride/Montrose Regional Airport, making it easier than ever to get there. For impeccably groomed cruisers, don’t miss See Forever. It follows a ridgeline down the spine of the resort and, true to its name, on a clear day you can see all the way to the La Salle Mountains in Utah. Several large bowls hold powder long after storms. Revelation Bowl, first opened to skiers seven winters ago, is arguably the best. For expert skiers, no trip to Telluride is complete without ascending the Stairway to Heaven, a vertigo-inducing staircase among the upper reaches of the resort’s hike-to terrain that accesses the upper Gold Hill Chutes. Pace yourself and catch your breath—you’ll be putting one foot in front of the other at nearly 13,000 feet above sea level.

Après Ski (4/4)
Tiny Telluride (population: ~2,500) punches well above its weight for cuisine. For fine dining, Allred’s has an incomparable view from St. Sophia Station—the high point of the gondola. It’s the place Wine Enthusiast named one of the “100 Best Wine Restaurants in America” where you can also find inventive, contemporary American fare like sustainably- sourced bourbon-marinated elk or unique lamb, steak and seafood. Head to Brown Dog Pizza on Colorado Avenue in downtown and get the world’s best pizza—literally (again, sorry New York). Pizzaiolo Jeff Smokevitch took first place at the 2015 Pizza World Championships in Parma, Italy. Or add some true elevation to haute cuisine. Alpino Vino whisks diners 12,000 feet above sea level via snowcat to a European-themed hut.

Stay (3/4)
The New Sheridan Hotel dates to the late 19th century but has been extensively renovated for 21st century comfort. Experience the Victorian-style architecture that represents Colorado’s mining era. Or, for a dose of wilderness solitude combined with luxe-yet-rustic charm, book the Alta Lakes Observatory accessible only by snowmobile, skis or snowshoes in winter. It’s an iconic building that sleeps up to 12, though not all will have the privacy they may want. For an intimate group, the space is a modern, picture-perfect lodge with all the trappings of a getaway (like shuttle service, catering and a visiting masseuse). The backdrop? Wilson Peak, made famous by Coors Brewing.

Play (4/4)
Telluride and its sister town Mountain Village (800 vertical feet higher) are linked by a free gondola that serves as the first and only pubic transportation system of its kind in the US. Hop aboard “the best commute in the country” for the 13-minute ride of jaw-dropping views. Do not miss the Telluride Arts District, a concentration of galleries and shops centered in a five- block stretch of Colorado Avenue. Or sign up for an “art anytime” program at Ah Haa School for the Arts one block from the base of the gondola. Telluride is also home to some of the best ice climbing in the country—sign up at world-famous Ouray Ice Park. 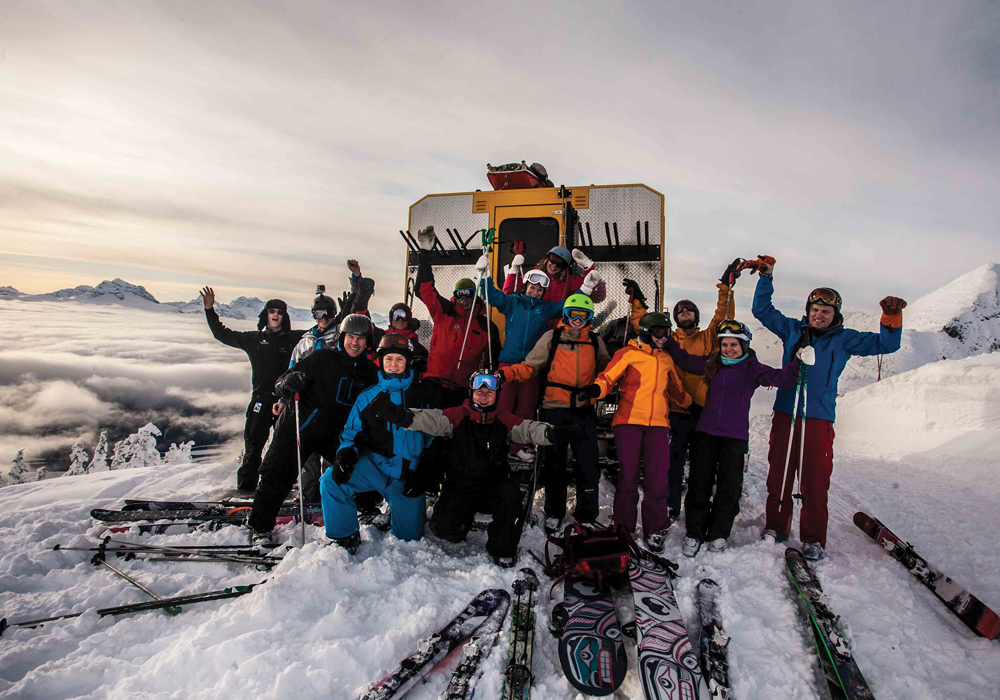 In the Canadian Rockies, skiing is all in the superlatives: longest runs, highest verts and deepest pow. image: john antoniuk

Historically, El Niño hasn’t been kind to Canada’s resorts. But there are exceptions to the rule. The secret lies at the highest-elevation enclaves in the coreof British Columbia’s famed Powder High- way region.

By those measures, Revelstoke Mountain Resort rises to the top. It is the place of superlatives. It boasts the greatest vertical drop—more than a vertical mile—of any resort in all of North America: 5,620 feet. Their longest run is 9.5 miles long. That’s a single ski run fully 1.5 times the entirety of the length of Long Island’s Sunken Meadow State Parkway. Revelstoke also boasts more than 3,000 acres of skiable terrain, more than that of Stowe and Telluride combined. And of course there’s the powder. Last winter, Revelstoke logged 361 inches (30 feet!). A good season can bring an absurd 45 feet of the white, fluffy stuff.

If your thighs can handle the burn, ride the Revelation Gondola and connect to The Stoke chair for a top-to-bottom run down Snow Rodeo. Revelstoke is renowned for its tree skiing, which abounds everywhere on the mountain. Glades of Glory off The Ripper chair and Clyde’s Secret Glades off The Stoke chair are freshly maintained for this season. If by some ludicrousness the resort’s lift-served terrain isn’t enough, sign up for unlimited vertical of cat skiing in three exclusive alpine bowls. Or go for the full monty and book a day with Tangiers Selkirk Heli Skiing to access half a million acres of the Canadian Rockies surrounding Revelstoke. 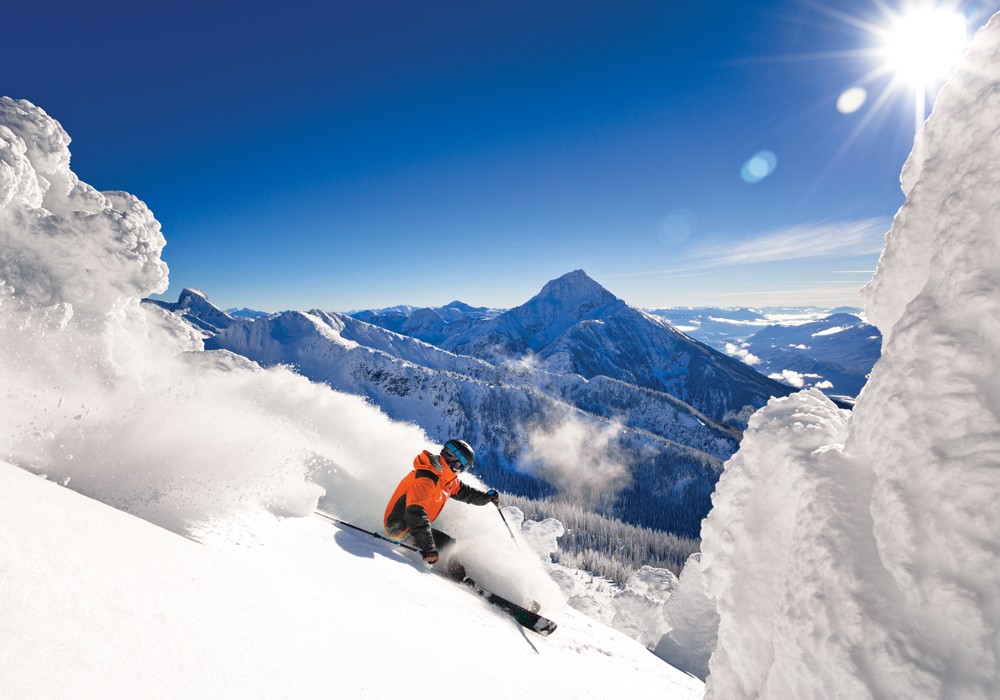 On the same premises, Traverse holds its own as the lone true nightclub. If you partied until the wee hours at Traverse, shake out the cobwebs at La Baguette—now with three locations in Revelstoke. It’s the place to go for breads and pastries. Founded by two transplants from Quebec, they take their pain seriously—the croissants take two full days to make from scratch.

Stay (3/4)
The ski-in/ski-out convenience of the slopeside luxury Sutton Place Hotel is hard to beat—Revelation Gondola is essentially on the doorstep. Comforting modern yet understated décor in browns and neutrals offers an airy welcome in the rooms. On-premises restaurant, lounge, gym and spa fill in the blanks when not on the trails. And naturally, they arrange for your every whim. Example? Those interested in adventure appreciate priority seating on cat skiing excursions if they are guests of Sutton Place. Likewise, Sutton will arrange for a private heli-ski package that will pick you up on property.

Less than a 10-minute drive away in downtown Revelstoke, the Regent Hotel is walking distance to shops and restaurants galore, not to mention Avalanche Canada’s headquarters around the corner. The property is an ideal family-friendly venue: “kids” under 17 stay free.

Play (3/4)
Revelstoke sits along the Trans- Canada Highway just west of Mount Revelstoke National Park, Glacier National Park and world-famous Rogers Pass, which boasts the highest avalanche activity of any highway in North America. It’s home to the Rogers Pass Discovery Centre, hailed as Canada’s best national park museum. It’s modeled after a historic railway snowshed. Or to get above the mountains—and the avalanches—take to the sky for a tandem flight with Revelstoke Paragliding.