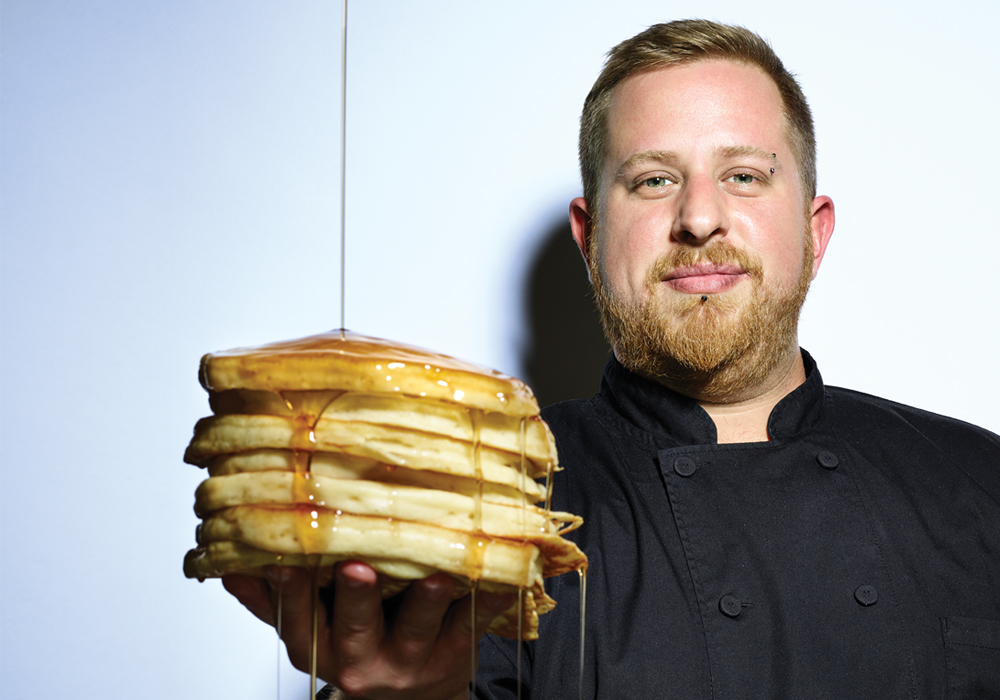 Chef Baez’s innovation in the kitchen stems from his lifelong culinary journey and a childhood memory of chasing rabbits. image: rick wenner

Roberto Baez can pinpoint the exact moment he decided to become a chef. At 7 years old, young Roberto accompanied his father and brother on a trip out east to visit a working farm. After a long drive from their home in Lindenhurst, his father led the boys to a cage full of rabbits, telling Roberto to pick one out. Thinking he chose the new family pet, he happily followed a farmer behind the barn—and watched him slaughter and skin the animal right in front of him. “Now, this could be tragic to some people,” Baez said. “But at the same time, we ate the rabbit later that night and it was good. From then on it really clicked. I could understand from A to Z what it took to actually put food on the table.”

Baez’s father, originally from Cuba, was always full of surprises. He would gather up pigeon eggs from the backyard and fry them up for breakfast. Or come home with live chickens in the trunk of his car. “He was crazy. He still wanted to pretend  that he was living on the farm. My mother would be terrified of what he was trying to cook,” Baez said. But his father’s antics, as well as his love of Cuban flavors and traditional dishes, inspired Roberto’s creativity from the beginning. “I give a lot of credit to him exposing me to those things and the different flavors that otherwise I would have never experienced.”

As executive chef at Morning Rose Cafe, Baez applies that same inventiveness to his own dishes. Specializing in breakfast, the restaurant puts a new spin on classics. It’s a concept that first occurred to him on a memorable trip to California, driving solo up the coast from San Diego to San Francisco.

“Every morning I would stop somewhere else for breakfast. I had a lot of great breakfasts in California. And when I came back I thought I would love to have a great little breakfast place in New York somewhere. It was always on my mind.” However, it would be some time before the right opportunity presented itself.

Near the end of 2013, after years of working late hours at fine dining restaurants like Wild Honey in Oyster Bay and even a stint running his own Cuban cuisine food truck, Baez yearned for a steady daytime gig. So when Rose Tzanetos was looking for a chef to helm her new breakfast and lunch spot in Bellmore, he jumped at the chance. But he knew they would have to set themselves apart to succeed. “Long Island is tough. If you’re not doing something that catches people’s eyes and taste buds, it’s just not going to work,” Baez said. The menu had to be experimental, yet accessible, a mix of familiar and funky.

The result is a repertoire of dishes outside the ordinary morning fare. Chef Baez draws inspiration from a multitude of influences. The Havana Pork Skillet is a tribute to his Cuban  heritage, a sizzling mixture of traditional ingredients like fried sweet plantains, black beans and mojo sauce topped with a sunny-side-up egg for good measure. The King Cakes, an homage to Elvis Presley, honor the icon’s love of peanut butter, bacon and banana sandwiches…but in pancake form. “I try to just have fun with it and use the ingredients that make me happy,” said Baez. “If you want to have your own style and your own flair, you have to think outside the box a little bit.”