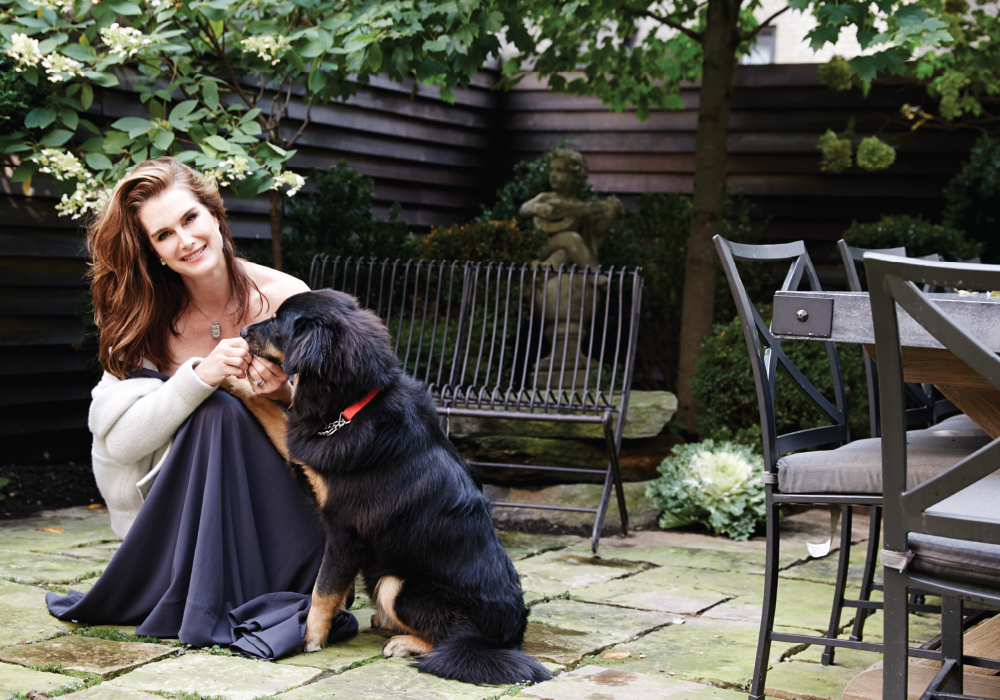 Brooke Shields was deemed the face of the 80s when she appeared on the cover of Time magazine in 1981. Like Lauren Hutton’s tooth gap and Cindy Crawford’s mole, Shield’s trademark brows, lush hair and natural style captivated the American public. “Although it was an honor, being defined as the face of an era has always seemed arbitrary to me. I miss that everything [in fashion] was new in the 80s, and now it’s versions of past styles. But I am happy to move past those leg warmers and shoulder pads,” Shields said.

Raised in Manhattan by a single mother who also served as her manager, the child actress and model was surrounded by artists and cutting edge fashion. While Shields’ first job was an Ivory Soap ad when she was 11 months old, she went on to star in controversial films like Pretty Baby, The Blue Lagoon and Endless Love.

Shields acknowledged The Blue Lagoon might be suitable for Disney audiences today, but 35 years ago it was considered risque. The same goes for her famous Calvin Klein jeans campaign sporting the tagline: “You wanna know what comes between me and my Calvins? Nothing.”

But acceptance is a big part of what keeps the style icon moving forward. “I actually found the original jeans from the commercial a few years ago,” said Shields, now 50. “I got into them but they were tight and came up above my belly button. I kept one pair and donated the other one to the Metropolitan Museum of Art Costume Institute.”

In her latest book, There Was a Little Girl: The Real Story of My Mother and Me, Shields unabashedly documents her storied career in connection to her mother. Often maligned by the press for allowing young Brooke to play mature roles, Teri Shields passed away in 2012. It was after reading her mother’s critical obituary in The New York Times, where quotes were taken out of context, that Brooke decided to write the memoir in her Southampton home. “It wasn’t even really about setting the record straight,” said Shields at a book signing at Urban Zen in Sag Harbor. “I basically did it because I had been in the public eye with my mother for 48 years…people had been saying things about us…our whole lives together. I just thought it was my turn to tell my version of our story.”

In the memoir, Shields doesn’t portray her mother as Mommie Dearest or Mother Teresa. She describes a protective, larger-than-life human being with a drinking problem, leaving Brooke to take on the role of caretaker. Throughout the ups and downs of their tight, co-dependent bond, Shields said she enjoyed the work and her mom always made sure the shoots took place after school—Bloomingdale’s and film crews had to wait. It wasn’t until she was in her 20s and married to tennis pro Andre Agassi that Shields started to manage her own career.

The mother of two, Rowan, 12, and Grier, 9, has been married to second husband, writer/producer Chris Henchy, for 14 years. Unlike her mother, Shields is not encouraging her daughters to go into show business. “I would not feel comfortable being a stage mom in this era,” said Shields, who, at 14, was the youngest model to ever appear on the cover of Vogue. “A lot has changed since I was a child model and actor,” including the explosion of social media. But Shields would like her girls to experience the travel and laughter that were a huge part of her upbringing. “We just came back from a family vacation and I enjoyed watching my daughters immersed in new cultures. I’d like them to experience as much of the world as possible.

Shields’ world changed in 1996 when she was asked to do a guest spot on Friends in which she played Joey’s delusional stalker girlfriend with a psychotic laugh. This role spurred the four-year run of her TV sitcom Suddenly Susan, on which she enjoyed displaying her comedy chops.

But while Shield’s proudest acting moments were Suddenly Susan and the Broadway production of Wonderful Town, she considers her biggest accomplishment graduating with honors from Princeton University in 1987. The actress believes education is the only thing the industry can’t take away from you. “School was a refuge for me,” said Shields, who majored in French Literature. “I had always wanted to speak fluent French and read the works of Proust and Baudelaire in their original language. And the experience was everything I dreamed it would be.”

Although Shields was surrounded by fashion her entire life, she didn’t develop her own fashion sense until working on the 2008 TV drama Lipstick Jungle (based on the book by Sex and the City author Candace Bushnell). Playing a NYC film executive wearing Bohemian-infused corporate attire (on a show where fashion was a main character) inspired Shields to look beyond her typical wardrobe. A fan of designers like Stella McCartney and Balenciaga, Shields said there’s nothing chicer than a European woman.

Describing her current style as “classic with an edge,” she has dismissed the title of style icon believing true icons like Grace Kelly, Audrey Hepburn and Jackie O. have a distinct look while hers changes according to the event.

Shields’ mood lightens around the holidays as she looks forward to the family traditions she didn’t always experience growing up. She said she still waits until Christmas Eve to decorate the tree with ornaments and strings of popcorn, but she’s also started some new rituals like painting ornaments with her daughters.

Along with the tradition and comfort of the holidays, Shields recognizes the importance of giving back. As someone who has lent her time to many charities throughout the years, including the Elizabeth Glaser Pediatric AIDS Foundation, Toys for Tots and the Animal Rescue Fund of the Hamptons, she makes a great role model for her girls.

These days, Shields is less concerned with her public image and has become more self-confident adopting her mother’s best traits: a sense of humor, a survivor mentality and a desire to maintain her integrity. Shields said she feels best when she doesn’t sweat the small stuff: “I get plenty of sleep, exercise, eat right, drink lots of water and enjoy life. Being happy helps keep me young.”