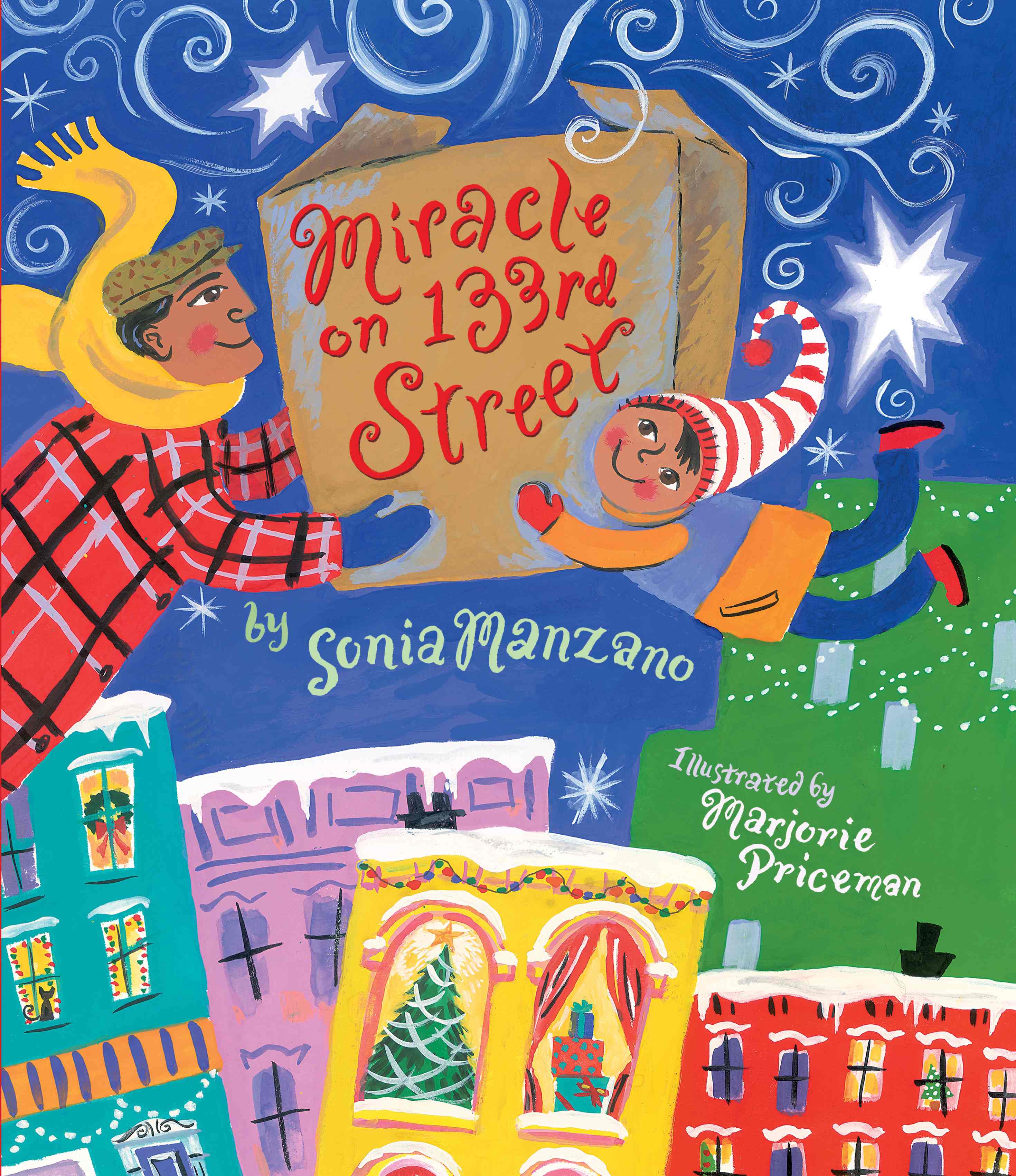 But you don’t mind; it’s Christmas and as long as other kids are careful, they can play with your new gifts, too. Sharing is one of the best things about the holidays, as you know, and in the new book Miracle on 133rd Street by Sonia Manzano, illustrated by Marjorie Priceman, it could make your holiday brighter.

It was Christmastime, and Jose’s family had the “tiniest Christmas tree ever.” There was hardly room for all the family’s ornaments. Their apartment was small, too, and Mami said the oven was too tiny for the Christmas roast, which made Papi sad.

He wished they’d never left Puerto Rico. Everything was bigger there.

But how do you cook a great big roast? Jose had an idea, Papi put the roast in a great big box, and they set out for Regular Ray’s Pizzeria.

They were barely out the door, when their neighbor, Mrs. Whitman, complained about the noise. On the third floor, Mr. and Mrs. Santiago mentioned that their children weren’t coming to visit this Christmas. Mr. Franklin thought there were burglars in the building, and he refused to come out of his apartment. The Wozenskys on the second floor were worried about money, Ms. Simon was yelling about shopping, and the DiPalma kids were making a huge racket. Even the customers at Happy Full Tummy Food Store seemed very unhappy.

Three hours later, though, the great big roast had been cooked in a great big pizza oven and the scent was “most glorious…so garlicky and olive oily and delicious…” It smelled so yummy that Jose felt like he was floating on its perfect, tasty goodness.

“Feliz Navidad,” said Mr. Ray as Jose and Papi headed home–but not before they invited Mr. Ray to share their meal. They invited the Wozinskys on the Second Floor, and they asked Mr. Franklin to leave his apartment. Mrs. Whitman came, too, and so did the Santiagos. Each person brought a little something to Jose’s apartment.

And that was where a miracle occurred…

The first guest arrives at your holiday celebration. Then the second, fifth, eighth, and tenth, and your child might wonder if there’ll be enough for this crowd. The answer, of course, is yes and Miracle on 133rd Street will show him how.

There’s always room for one more, as author and Emmy Award-winning actress Sonia Manzano proves in this sweet little story that starts out sad and ends in such joy that you won’t be able to stop smiling. The ingenuity of Jose and his papi boost this tale in a perfect way, and I loved how Manzano subtly portrays a multi-level, multi-cultured apartment building and the people inside it. Add in magical, sparkling pictures by Marjorie Priceman and you’ve got an instant holiday classic.

Though this book is mainly for 4-to-8-year-olds, I think slightly younger children might sit still for it. One read-through or bedtime read-aloud, and your kids will agree that Miracle on 133rd Street is a good story to share.