Waves break against the frosted shoreline of Southampton. The beach is barren and the air is cold and crisp. Winter has arrived on Long Island and, for local surfers, the mix of peace and chaos that they crave, barring the harsh elements the season may bring, is here as well.

“It is like a cup of coffee,” Long Island surfer and Stony Brook junior Rachel Tanaka said. “It is peaceful but also wakes you up.”

Gearing up in her black 5/4/3 millimeter hooded wetsuit, she is ready to duck dive into the Atlantic Ocean as a wave breaks in front of her face.

Long Island shores are home to surfers like Tanaka year-round. Montauk, Southampton, Quogue and Long Beach may be flooded with tourists and beachgoers during the warmer months, but winter surfing attracts more advanced surfers.

Nineteen-year-old surfer Chris Giannone said surfing in the winter is an escape.

“The summer crowd is overwhelming at times,” Chris said. “You go down to the beach for peace and quiet and try to surf, and usually when you are surfing in the winter, you are surfing with your buddies.”

Chris has surfed around the world sponsored by companies like NYSEA, Natures Shapes and Unsound Surf but says the waves of Puerto Rico, Barbados, the North Shore of Hawaii and California do not compare to Long Beach, Long Island.

“It’s where I’m most comfortable in the water,” Chris said. “No one bothers us, and it’s all about having fun.”

The people who come out in the winter weather are the more diehard surfers, Nancy Giannone, Chris’s mother and office manager of Skudin Surf in Long Beach said.

It takes a unique type of dedication to slip into a 5/4/3 millimeter wetsuit, 7-millimeter hood, gloves and booties, which is what Chris suggests for a day of winter surfing.

“When you fall and get your wetsuit flushed with that cold water, it can get the life sucked out of you,” he said. 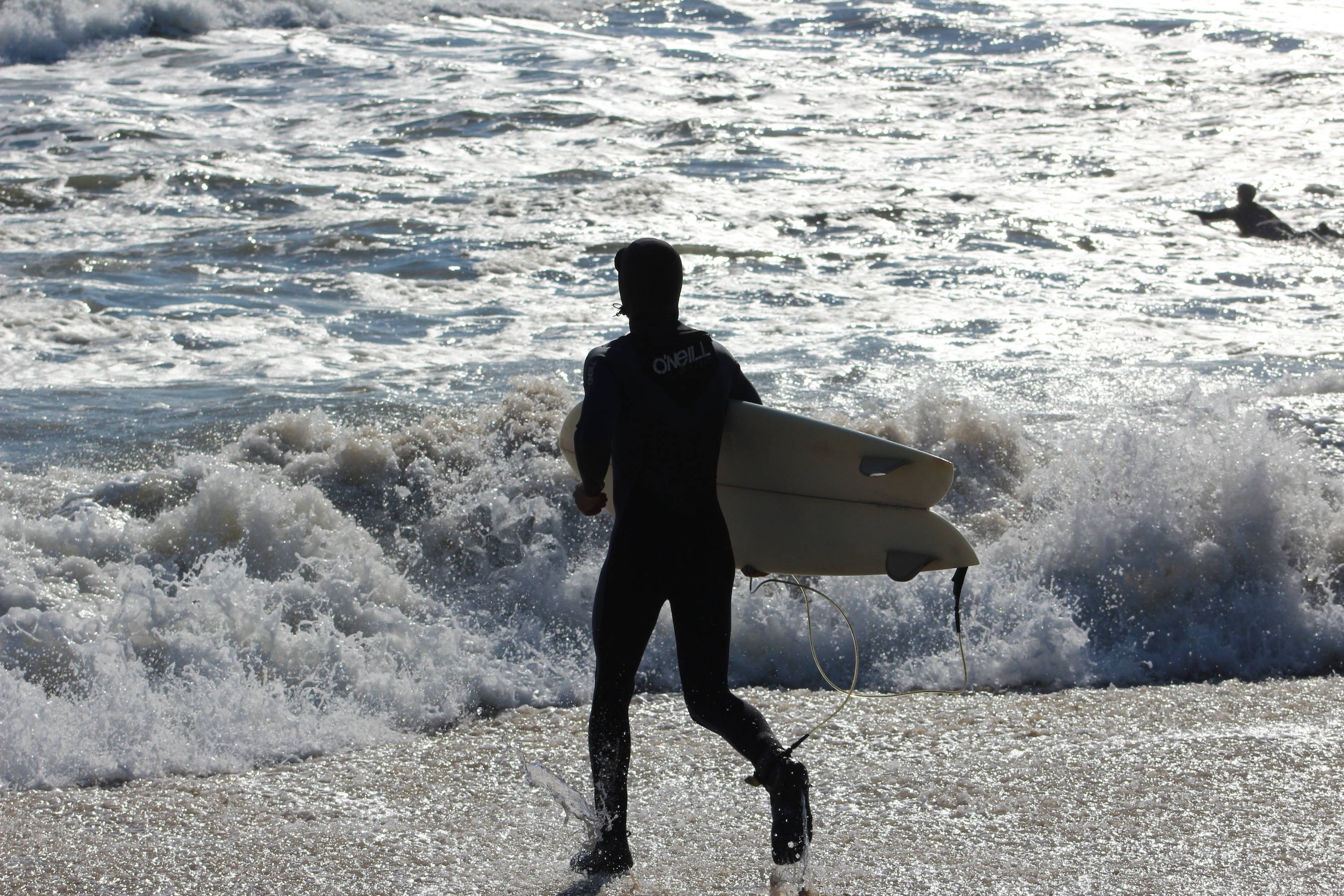 Believe it or not, some locals run towards the waves even as the temps drop image: rena thomas

And it seems like more and more people are donning their wetsuits well after the first frost of the year. Surf instructor Kristen Angiulo of CoreysWave in Montauk said the sport is becoming more mainstream and attracting people year-round as opposed to only in the summertime.

“There are more and more people each year, we get total newbies out of the woodwork,” Angiulo said. “People are just willing to jump in cold water without having any knowledge.”

Craig Depken, a sports economist at the College of Business at UNC Charlotte, said there is little research on the economics of surfing, but the sport has seen growth since the early 2000s.

“It is estimated that between 10-30 million people worldwide surf on a regular basis,” Depken said.

But braving the elements isn’t for everyone. For those who want to ride the waves in a safe and controlled environment, Brett Portera, a Long Island native and lifelong surfer and his father, Chris Portera, are working on a revolutionary addition to the surf community on Long Island: an indoor surf park for surfers of all skill levels.

Long Island Surf Park, located in Riverhead, went public last summer and aims to be run like a country club for surfers looking for the perfect wave throughout the course of the whole year.

Disney World’s Typhoon Lagoon and its ability to create an indoor underwater experience inspired Brett Portera, a sophomore at Bentley University, and his father, a longtime businessman.

“This is perfect, something you aren’t going to find (all year round),” Brett Portera said. “Maybe when you get a winter storm or a nor’easter but the tide has to be right.”

The park will also feature a frame peak, meaning two riders can get on the wave at one time with one person going left and the other going right. 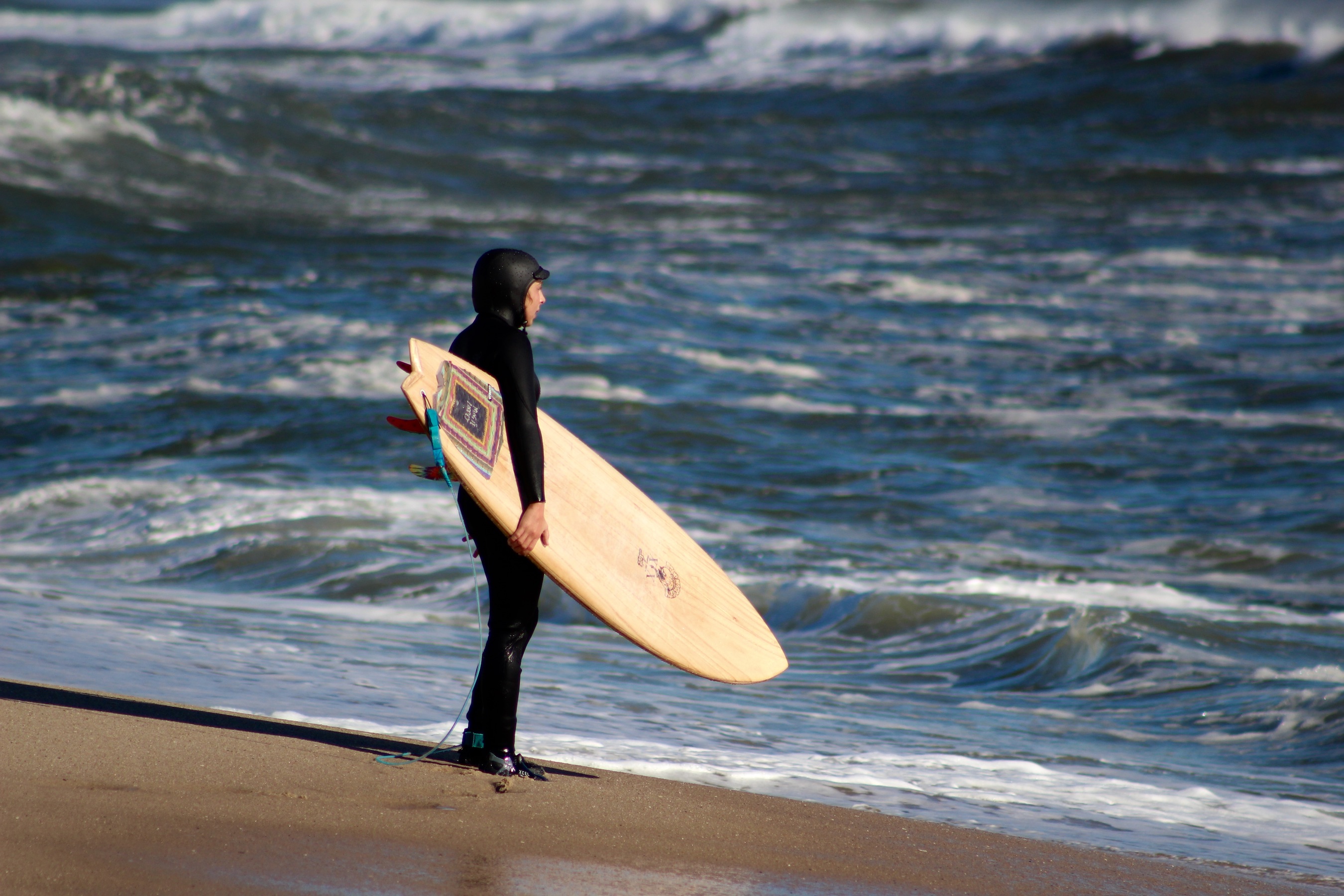 “On Long Island, there’s a swell and you know this is going to be gone in three hours, so you either drop what you’re doing and go and surf, or you’re gonna have to wait another two weeks, three weeks for another halfway decent system to roll through,” Tanaka said. image: rena thomas

“You catch more waves in an hour here than you catch in three hours outdoors,” Portera said.

But for surfers like Tanaka, it is about the chase for the perfect wave at any time. She recalls skipping class and surfing between finals just to be on the water at that opportune time when the wave is just right.

“On Long Island, there’s a swell and you know this is going to be gone in three hours, so you either drop what you’re doing and go and surf, or you’re gonna have to wait another two weeks, three weeks for another halfway decent system to roll through,” Tanaka said. “We are an especially dedicated bunch.”