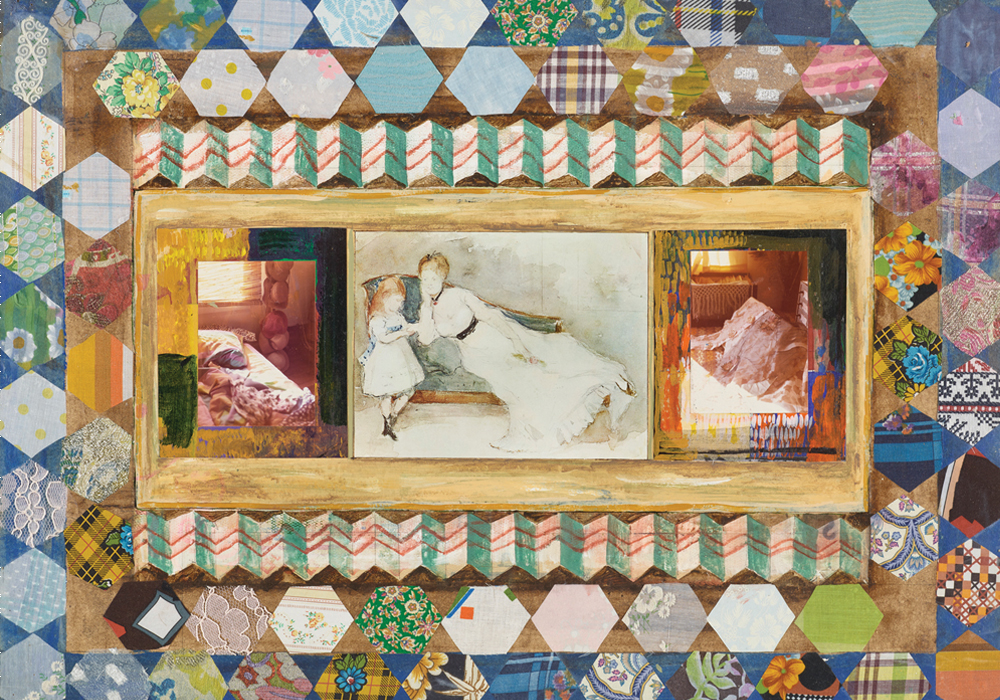 This winter, Heckscher Museum brings the sexes together with two concurrent exhibitions that explore gender differences and artistic confluence. Drawing from the museum’s expansive and underrated permanent collection: You Go Girl! and Men at Work are both running through March of 2016.

By the early 20th century women were afforded more social rights, but garnering respect and artistic freedom remained an uphill battle. As artists they had to work harder to showcase their work within the complex web of universities, museums and galleries that’s long been dominated by men.

In the 70s, female artists like Howardena Pindell and Ce Roser (both featured in this exhibit) started advocating for women by staging protests at the Museum of Modern Art and the Whitney. This movement’s success spawned organizations and collectives that would provide women with many of the artistic opportunities they enjoy today. It’s a strong coalescence of creative and social achievement not lost on the Heckscher’s curator of exhibitions and collections, Lisa Chalif. 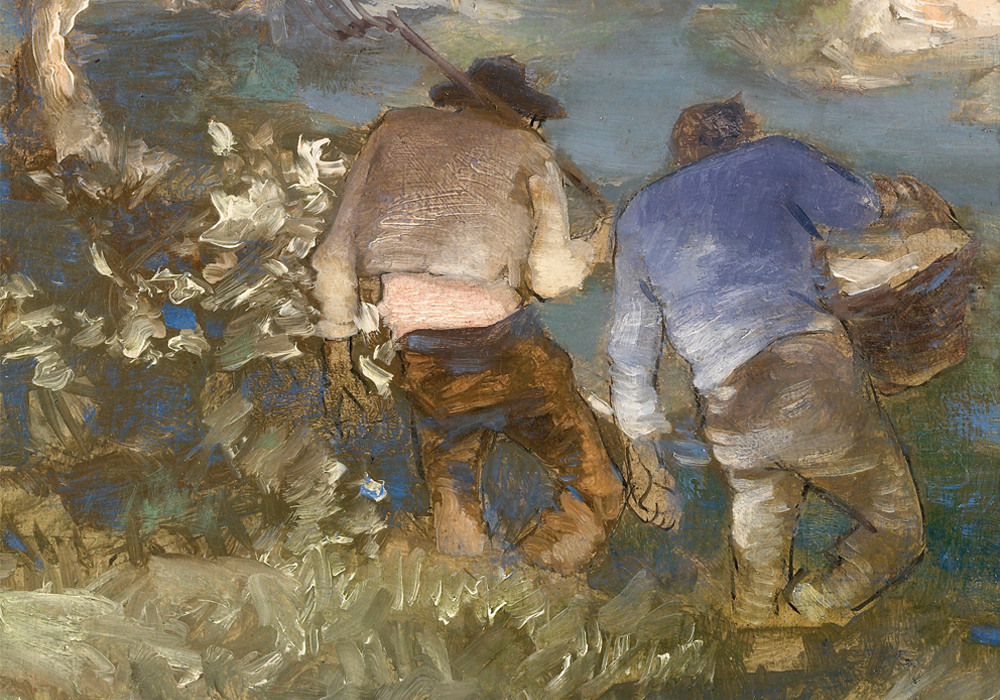 “These are the last two exhibitions of our 95th anniversary year, which has focused exclusively on works from our Permanent Collection,” said Chalif. “You Go Girl! is our first exhibition of women artists from our own collection and it includes a couple of wonderful works that we have recently acquired. Most notably an early collage by Miriam Schapiro, who was a pivotal figure in American feminism.”

Schapiro defied conventions by producing “arts and crafts” long considered “women’s work” in a subversive and sophisticated way. “Berthe Morisot and Me” (collage, 1976) is a dense, kaleidoscopic amalgam of diverse materials and colors. Small impressionist sketches of two women, reminiscent of Edgar Degas’ dancers, are framed in a rich tapestry of color where meticulously designed geometric shapes create a frame within a frame. The result is an ornate, masculine presentation that’s playful in its composition, an interesting juxtaposition of structure and sentiment. 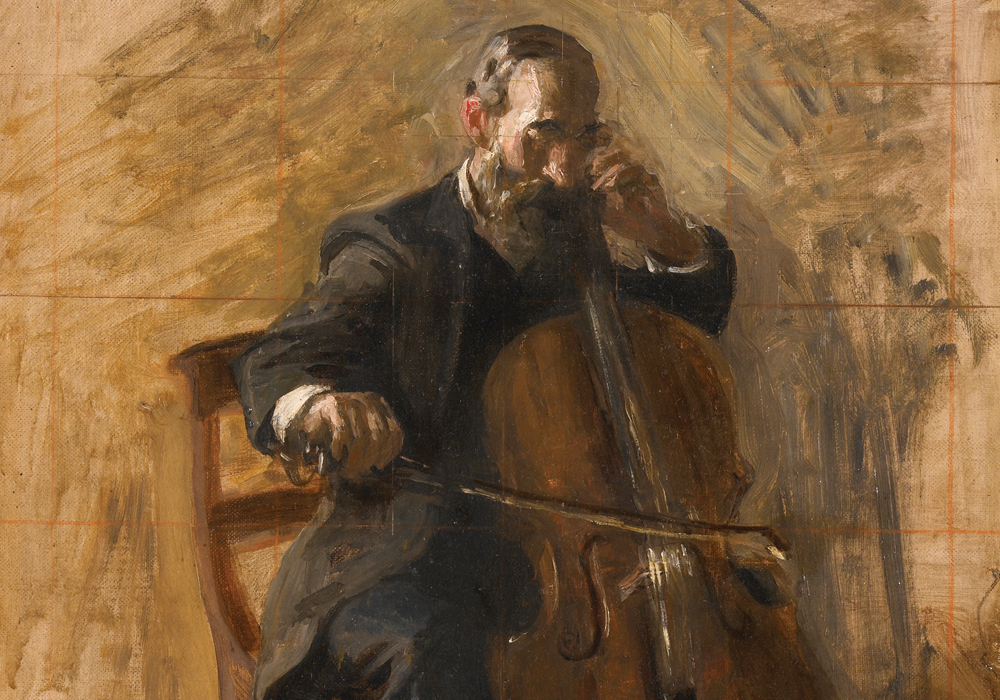 Early 20th century photographer Berenice Abbott does for New York City what Ansel Adams did for Muir Woods. The crisp lines of her silver on gelatin print: “West Street” (1936) depicts skyscrapers and downtown tenements elegantly framed and shaded in grayscale. Shadows and light play vertically against one another to create majesty contrasted with simplicity and toughness.

No discussion of female artistry is complete without Georgia O’ Keefe. In “Machu Picchu, Peru” (1976, watercolor on paper), she portrays these iconic mountains covered in long stretches of blue and white snow, the overall effect is a cascade of cool. While she leaves much of the subtle sexuality of her “flower work” of the American Southwest behind for a more impressionistic take, she loses none of her deep connection to nature.

Perhaps men haven’t had to work as hard for artistic exposure and credibility, but they still have to work hard. Whether as laymen, intellectuals, fighters or simply dreamers: Men at Work shows us man in his myriad efforts to become great. Alonzo Chappell’s “Drafting the Declaration of Independence” (undated, oil on canvas) is a fine snapshot of this universal pursuit. The image is classically composed, but appears to catch the some of the founding fathers—Jefferson, Adams and Franklin—in a rare moment of down time where they are hanging out.

Russian photographer Mark Markov-Ginsberg’s “For Our Motherland!” (1943) is not men at work, but men at war. Two World War II soldiers surge forward out of the fog of combat, brandishing weapons, running headlong into fear. The black-and-white picture is haunting. And it’s a stark reminder of the ugliness of battle.

On a warmer note, Thomas Eakins’ “The Cello Player” (1896, oil on canvas) is a quasi-exercise in mise en abyme. Utilizing soft brushstrokes and warm browns and yellows, this deft balance of impressionism and literalism illustrates a solitary musician fused to his craft. As he sits with total concentration, bowing the strings, we can almost see the dust in the air and hear the low, warm tones wafting from the attic space where he practices. The overall effect is high art depicting high art, which gets us high on art.