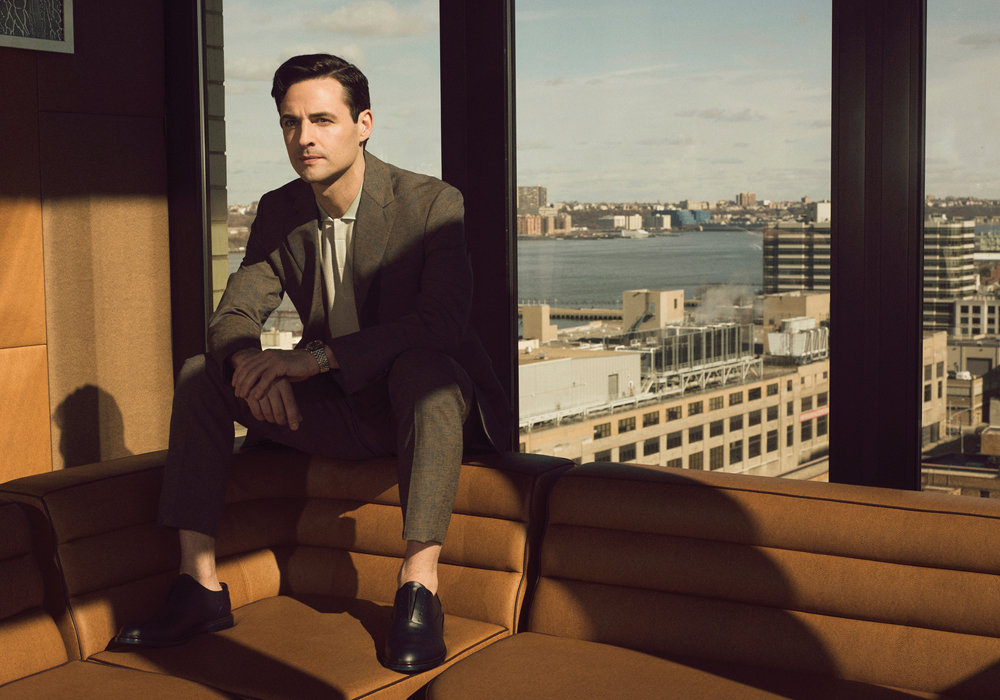 In Broadway’s Tony nominated An American in Paris, the high-energy dance numbers are as poetic as they are uplifting. Amidst a Gershwin score and brilliant ballet routines lies Paris’ biggest heart: Rockville Centre’s Max von Essen steals the show at the Palace Theatre as he leads the second act’s thrillingly optimistic tap number, “I’ll Build a Stairway to Paradise.” There isn’t a number more fitting for the actor who has been building his own stairway from South Side Middle School productions of Bye, Bye Birdie and Cabaret to six Broadway shows, including Jesus Christ Superstar and Evita. As Paris’ one-year anniversary approaches this April, the actor reflected on his experience with the show, telling Pulse, “It is definitely my own ‘paradise.’”

As Paris’ Henri, von Essen is unique in that he is not in the epic ballet numbers, nor does he play an American. Henri is a Parisian heir and a closeted cabaret singer whose aristocratic parents expect him to marry Lise (Leanne Cope). Von Essen speaks of the road to the role, for which he received Tony and Drama Desk nominations, as one that greatly mirrors his own road to acceptance both on and off the stage. After singing privately and playing piano for South Side Middle School productions of Once Upon a Mattress and Anything Goes, he got the bug to give live performance his all.

“You really can’t sing without acting,” he said, remembering his transition to the stage. “The shows we did in high school were very advanced for us, but we were supported in such a beautiful way. I remember them bringing in a set designer and choreographer from New York. My drama teacher, Larry Waxman, was an actor living in the city and he was ahead of everyone’s time for that community.” Von Essen didn’t realize until later how fortunate he was to get such training. “Most people had to look for opportunities outside of the public school system. I was getting some amazing opportunities early on and it made a big difference.”

Before moving on to double major in economics and voice at University of North Carolina at Chapel Hill, von Essen grew up on Marvin Avenue. He credits his parents with instilling in him a practical nature, while still encouraging him to follow his dreams. “They loved the arts, but they didn’t grow up in the arts. They loved what it did for me with my network of friends and the discipline I learned, but they weren’t necessarily encouraging it as something I would be doing for my career. I never thought of it as a lifelong career either. I thought I was going to work in an investment bank and perform locally!”

When von Essen didn’t seize the opportunities that were available to him in his college years, he actually started his own production company and would perform in each show. “I woke up one day close to graduation and thought, ‘It’s either now or never, I’ll always regret not trying,’” he said.

His talent and hard work landed him his first gig with the most iconic leading lady of all. “Liza Minnelli was so much fun to hang out with. And just so funny,” he said of being a chorus boy throughout her tour. “One night her pants split open when we were on stage. She had on this full male tuxedo and was doing ‘New York, New York’. The three backup performers were hanging out, sitting up with the orchestra during this finale and the entire butt split. She had a thong on or something,” he laughed.

Though he says that his Tony nomination is a career highlight, von Essen considers his steady work over the years to have been the real treat. “Every couple of years there’s something that’s a little bit magical.” Favorites of his include an Irish Repertory Theatre production of Finian’s Rainbow with Melissa Errico and Malcolm Gets. “It was basically no money and it was a lovely theater down in Chelsea, but it was every reason we are in this business. It all just happened.” Another favorite was The Baker’s Wife at Paper Mill Playhouse where he was in awe of the leading lady. “I hadn’t until that moment worked with someone that jumps in so fearlessly. It’s almost frightening,” he said of Alice Ripley.

Of course, Paris ranks as the turning point in von Essen’s career. “I fell in love with Henri very quickly because I knew how torn he was with so many things: his sexuality, his dreams, growing up in this very conservative family…” He remembers auditioning for the role, knowing he would have been heartbroken if he didn’t land it. “I was never playing him for laughs. I played him with absolute belief and conviction and it wound up getting laughter. I think they found him kind of charming in this insecure way and that was one of the things that definitely got the role for me.” Von Essen was given the meaty role despite never having worn a tap shoe in his life. The Gershwins were one of the first songwriting teams he discovered as a kid and von Essen believes that helped his chances. “I had a natural ease with the music. Every facet was kind of meant to be in this weird way.”

When he returns to Rockville Centre on a regular basis to see his family, which also consists of nieces in the school district (one of which is following in his footsteps as a performer at South Side High School) he reminds himself of how hard it was to get from Long Island to the Palace Theatre. “As a kid I thought there was no way I’d be on that stage. How could I possibly be one of those people that comes out of the stage door, or one of the people I wait for to get an autograph? How does that happen?” he laughed. “Then I became one of those people, and I am very proud of my roots and what I have accomplished.”