Mike Philbrick and the staff at Port Jeff Brewing Company are some of the busiest, hardest working people around. Open every day of the year except for Christmas—ironic considering its home on Mill Creek Road was once a Christmas shoppe—the small-batch craft brewery offers locals and Connecticut natives awaiting the ferry a chance to get a tasting room experience while much of the East End settles in for a long winter’s nap. If you’re headed down to Port, grab a stool at Port Jeff Brewing Company and try these five seasonal favorites.

“There’s people I don’t see here all year round and then the Cold North Wind comes out,” Philbrick said of the beer that boasts a sweet malty character up front and just enough hops at the finish to create a perfect balance. The brew’s cult following has Mother Nature to thank. Philbrick bought a chiller just before a snowstorm and while snowed in just went through the motions and brewed a beer without a recipe just to test it out. He loved it, thankfully wrote down what he did and appropriately named it “The Cold North Wind,” which Port Jeff residents know means a storm is coming. If the forecast calls for snow, rest assured: “It’s 8.5 percent alcohol by volume, so it warms you up,” Philbrick said.

Eat with: Philbrick recommends enjoying a Cold North Wind with a spicy pasta or chicken dish. “It will cool it off a bit. There’s enough hops in there to compete with [the dish] but also has the caramel to smooth it down.”

People who love to start the day with a cup of mocha will want seconds of the Porter. Medium bodied with roasted malt, chocolate and coffee overtones and a subtle honey finish, it’s a dark, soft, creamy brew that can be enjoyed by the faint of heart and beer connoisseur.

Eat with: There’s a perception out there that dark beers are basically a fourth and fifth meal. “That, to some degree, is not this beer,” Philbrick said. “It’s fairly light in body. It’s a beer you can drink three or four of them and not feel super-stuffed.” Because of that, the Porter is pretty versatile when it comes to food pairings.Philbrick suggests sticking with red meat. 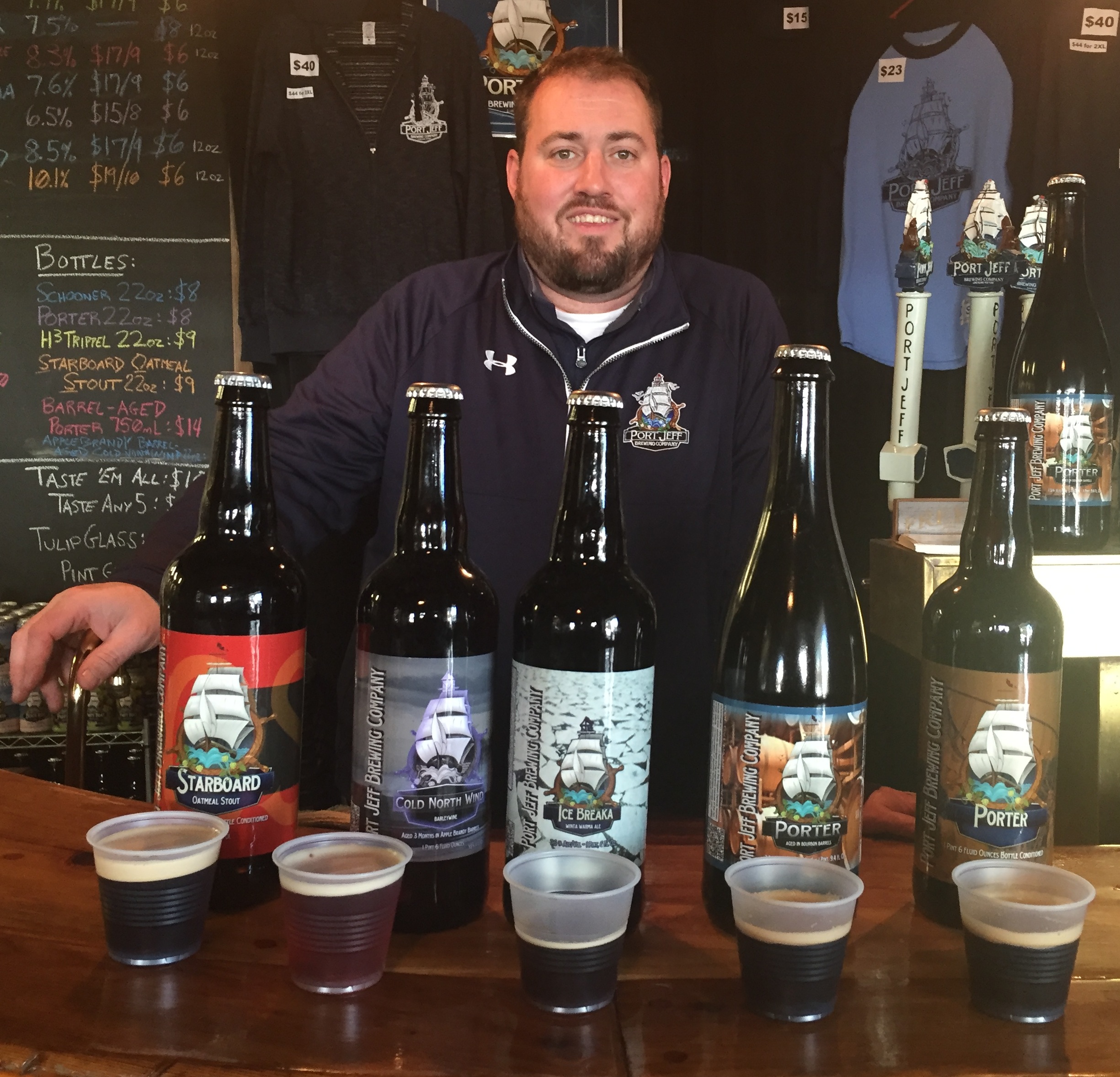 Port Jeff Brewing Company is open every day of the year but Christmas, making Mike Philbrick and his team some of the hardest workers around.

Beer nerds flock to Port Jeff Brewing Company to get their hands on a bottle of this. It’s a hot commodity, the brewery only makes 300 bottles of it each year, and it has an older, sharper taste to it than its little brother the Porter because of the oxidation that occurs when Philbrick ages it in a whiskey barrel.

Eat with: You know what Philbrick said about being able to drink multiple Porters with your meal? Throw all that out when it comes to the aged version.

“It’s a whole different animal,” he said. “The beer itself has a lot going on because you have all the attributes of the porter that are a little bit subdued because it’s been aged in a barrel but that barrel is bringing to it oak, vanilla, bourbon, some of the sherry notes from the oxidization.” At beer dinners, it’s normally served at the end either with a rich German chocolate cake that can hold its own against the big-boy brew or all by itself.

Eat with: At a recent taps and apps event with Del Fuego in Saint James, Port Jeff Brewing Company served the Ice Breaka with a short rib mole taco. “It was awesome,” Philbrick said. “Mole is sort of a rich, spicy chile sauce and the mahogany, the caramel-ness with the spices in it went super-well with this.”

The dark, rich color of the Starboard Oatmeal Stout just screams “winter pour.” The 9.2 percent alcohol by volume and 2015 gold medal win at the U.S. Open Beer Championship are sure to continue to pique your curiosity. Savor a drink that’s somewhere in between a savory bowl of oatmeal and sweet oatmeal cookie with raisins, oats and brown sugar.

Eat with: Because of its rich character, Philbrick loves to pair the Starboard Oatmeal Stout with desserts like a chocolate cake, and red meats. One Port Jeff Brewing Company staffer actually puts it on vanilla ice cream and makes a float. Put that on your winter-dining bucket list.