A veteran travel writer—not fixed in foodie mode—reviews six NYC restaurants with a focus on what the venues communicate. 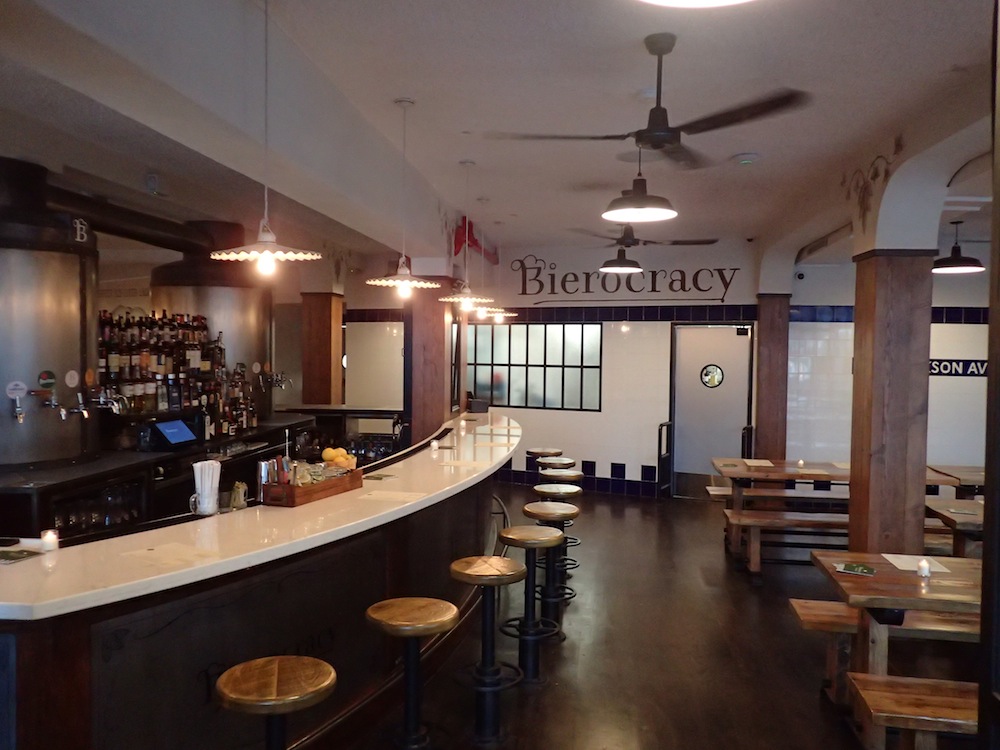 A great example of Queens having more space available than the other boroughs is Long Island City’s swank Central-Euro-style beer hall Bierocracy, where their fearless brewmaster Eric parked one of their special imports (an organic Koutska 12) before me and testified that “foam is not a nuisance.”

I went there solo and hit it off with the staff and other customers, which is easy to do in this 4,000 square foot venue with 220 seats, long wooden communal tables, a chunky stone-topped bar, and looming vats housing taps for the 13 beers drawn from them. Industrial white and blue wall tiles and fanciful beer culture artwork sets the mood. The gastropub (note the green-tiled wood oven) offerings included tomato basil soup, mussels atop a divine slice of wet bread, and of course, schnitzel. Their beer pub hits include the lobster salad in a pretzel roll with radish sprouts and crème fraiche. The bartenders also keep fanning the “Beer Head Games” (ask them). The řezané is an elevated Black & Tan, a half-and-half pour of pilsner topped with the wet foam of a dark lager. If you’re clueless about fine brews, just get there and take a seat. The soundtrack morphed from bassy jazz to rock and then a live sax-led jazz trio took over. Hence, time for a NY Sour (rye whiskey, lemon, simple syrup, red wine float—nah probably won’t find this one in Eastern Europe). When this traditional-but-hip old Euro-feeling communal hangout fills up, you realize that although it’s run like a real business, nobody is having a business experience. Just say, “Czech please.” Go. 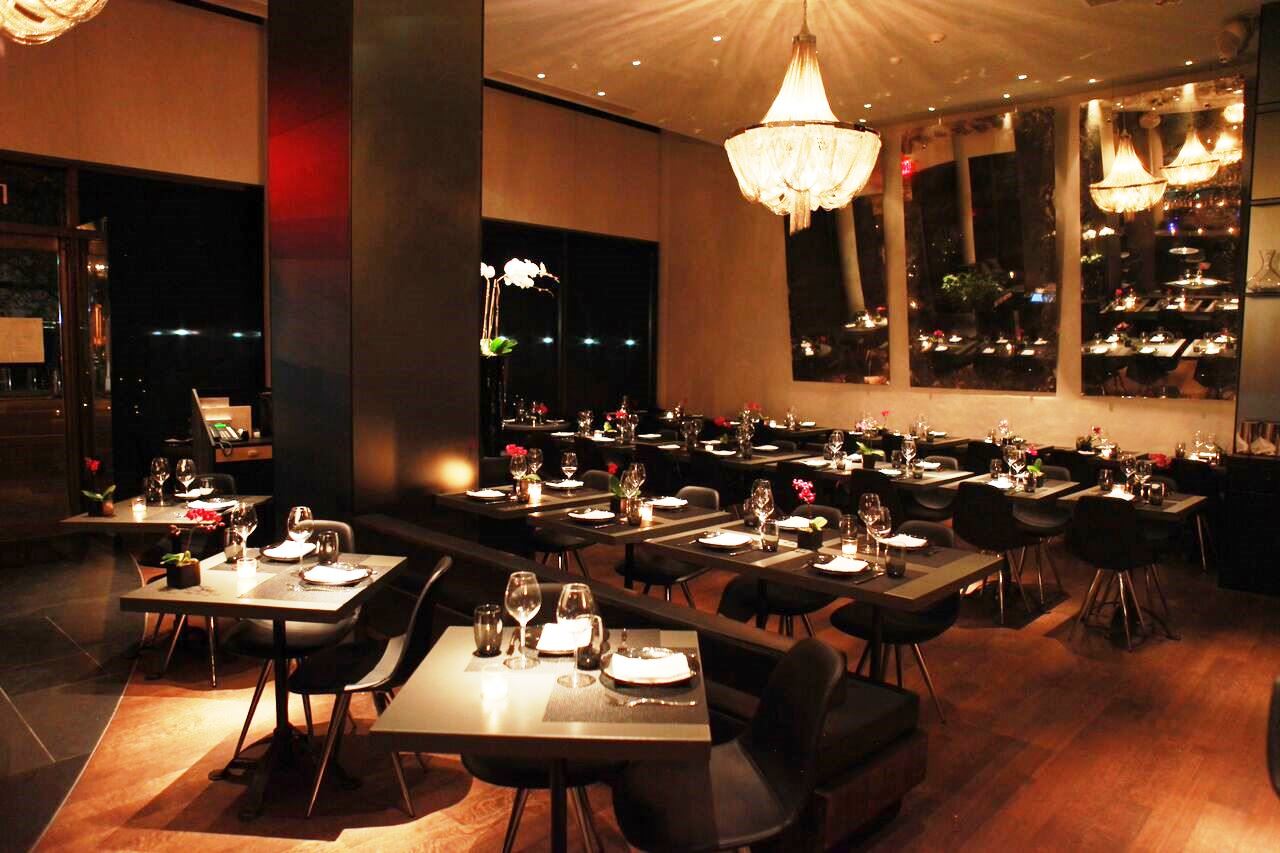 We all know that being in the front row at a favored show is the best seat in the house. Same goes for restaurants, if you pick wisely. The tiny front row at Theo’s Restaurant & Oyster Bar’s very open kitchen is that pick. You wouldn’t normally associate a spacious Upper East Side modern high-ceiling restaurant with wraparound 17-foot-high windows as intimate, but step inside and this very open kitchen and the staff immediately draws you in and then nourishes you. As straight-shooting finger-lime aficionado and street-guru Chef Skeen stirs his magic— cod hush puppies, black truffles, and crab and ricotta gnocchi with aji amarello, basil and paprika—the three front row seats on the open kitchen humanizes the high-pressure flair required to make this all work. Having the chefs suggesting dishes and explaining as they prepare everything is a dazzler. Theo, the owner, was raised in Athens, Greece by a restaurateur dad—but veered from that path for finance, until now. His “serious” man’s-man dad occasionally shows up “to stare down the chef” Skeen, who commands the open kitchen with his brand of tough love. With so many options you can also forget that it’s also an oyster bar. They self-butcher their meats, two becoming coveted entrees: ½ brick chicken and dry aged New York strip steak. You can even make a meal out of Theo’s “Sides”—include the blistered brussels sprouts with smoked salted almonds. Wherever you sit here, you’re part of the action, this place is fun… don’t miss out on the tuna tartare with sesame, avocado and finger lime: (crunchy, bursting “citrus caviar” lime beads). Its proximity to F stop invites foodies from other boroughs. Go. 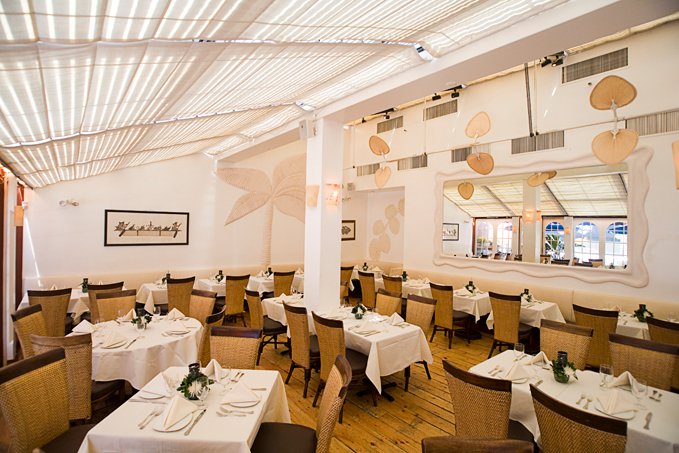 NYC’s maze of possibility means that every façade cloaks something. Discovering East 49th Street’s Pampano was a journey into Latin fusion, and a lesson on how to open any kid’s heart and mouth. One flight above its quaint bar area, the inviting dining area is fronted by big patio windows and filled with UN staffers, local regulars, and others seeking high-end Mexican inspiration (get there at 5:30 and you’ve got the place to yourself).

The creamy shrimp ceviche and clear-citrus-sauce shrimp ceviche wowed me, but it wasn’t until the lobster taco showed up that my 10-year-old daughter and her pal sat up straight. Pampano’s take on coastal Mexican gourmet also sources Peruvian ingredients. Encouraging kids to communicate with foreign menus is simplified here, as the calming, gracious staff also understands young palates—bring on the caldo tlacpeno de mariscos (seafood soup entree in a tomato broth). The pan-seared scallops will not disappoint.

Taking margaritas to a new level, sample their de oro (classic), de tamarindo (smoky), and the de morazya (passion fruit). The dessert goat milk got a chuckle (as opposed to the Mexican hot chocolate which was inhaled); once the churros and other chocolate delights were gulped, the girls joined me in applauding this upscale but down-to-earth getaway. Go. 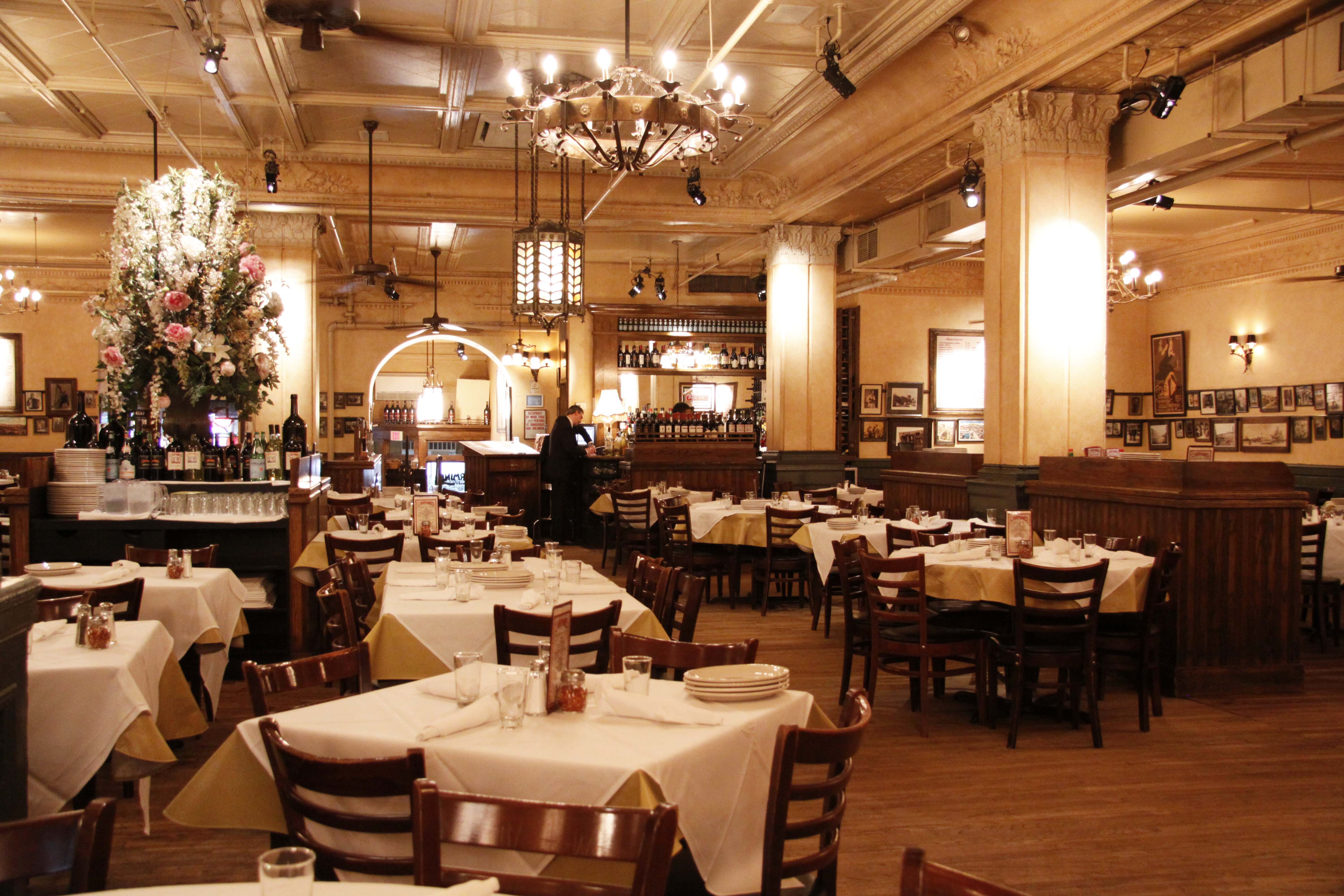 Don’t fear famous places—including Carmines Upper West Side. The trick (as in most forays in life) is to visit when it’s not mobbed; think avoid weekend warriors. But there is a reason why this institution is frequently crowded. It’s a blast.

When they say family style Italian, it also means that your career servers are part of the wide-open fun—their participation makes this space resemble a lively community center. Carmine’s original location has an early 1900s big saloon feel. Nobody in my group of four was Italian, and it included a vegetarian (oh no?), who was also completely satisfied by their veggies selection—four hours later! Another hurricane of staff co-delivered the enormous on-the-bone Porterhouse steak fantasy just as another random birthday party song erupted. Here, every group table seems to have a featured King or Queen. The Titanic desserts resemble carved turkeys. 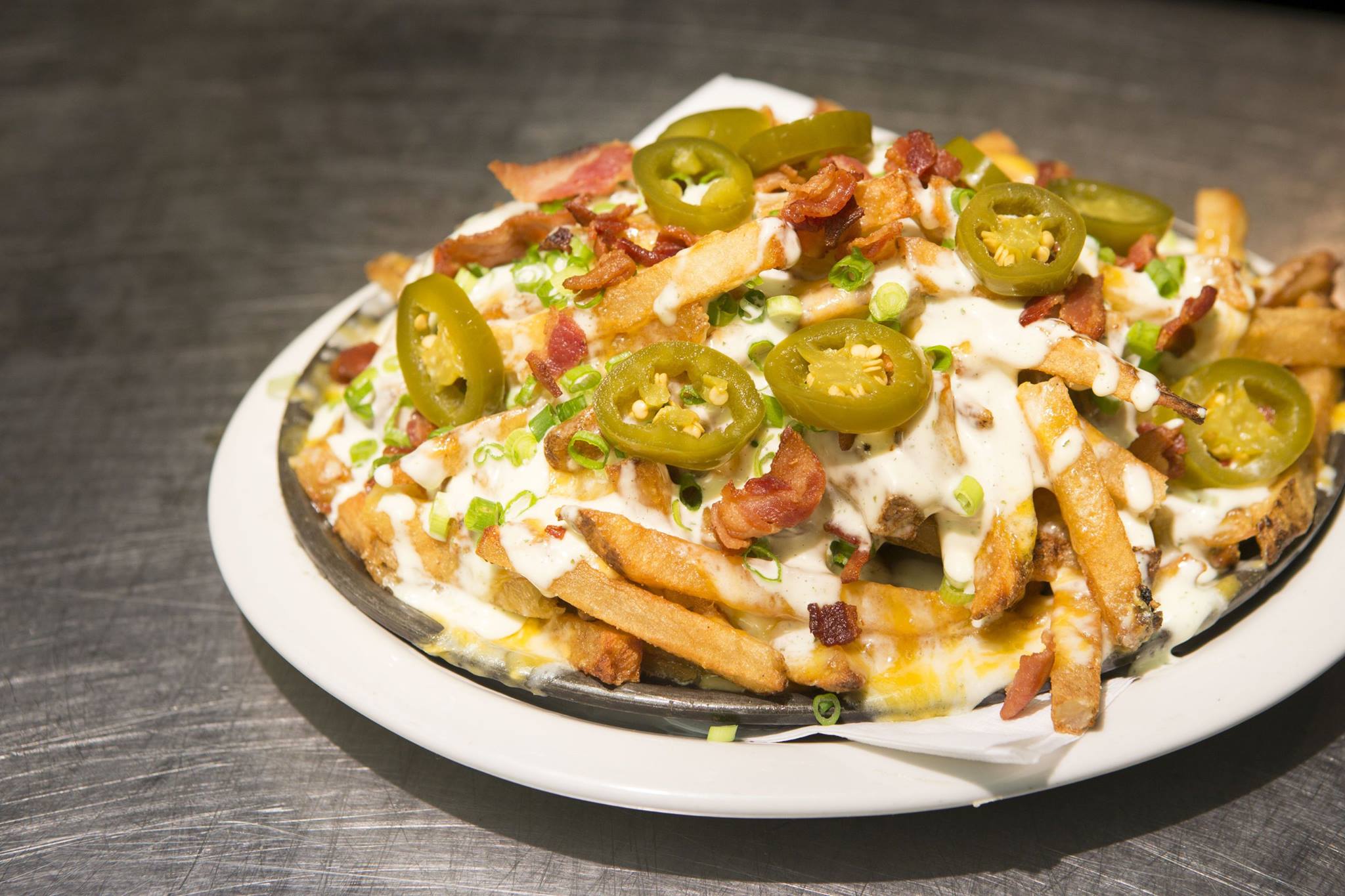 Some NYC restaurants take themselves too seriously, others, like Virgil’s Real Barbeque in Times Square, celebrate messy fun. Established in 1994 as Manhattan’s first authentic BBQ joint, its two wood-burning pit smokers crank out 1,200-pounds of meat daily—that stack of firewood visible from the entrance is no ruse. Imagine a bi-level, evolved Dallas BBQ with a diversified menu and world-class lineup of fine brews and whiskeys (this is not a wine joint).

The ultra-fast Manhattan-style service doesn’t mean lousy fast food—and you won’t be chastised for calmly gazing upon the W 44th St. pedestrian circus. Their chile recalls your mom’s classic beef stew, but with a hearty kick. Join in-the-know tourists for a naughty feast including pickled beets. Their combination platters make it easy to mesh their timeless hits like Texas Beef Brisket (just say yes), Memphis Style Pork Spare Ribs (½ rack, dry rubbed and hickory smoked; suggested beer pairing Pork Slap Pale Ale), and their trademark Carolina Pulled Pork. The casual by-the-bootstraps atmosphere creates a side of the highway roadhouse feel where the popcorn shrimp (cornmeal-crusted rock shrimp served over popcorn with spicy remoulade dipping sauce) is later balanced by their high-end style roaming show-and-tell dessert selection tray. We kept it simple with a gargantuan chocolate shake—and will return for that, at least (buh-bye diet). This slow-cooked fast-food pioneer is opening soon in the Bahamas and Las Vegas, and likely bringing a bit of that spirited Times Square hustle with them. Go. 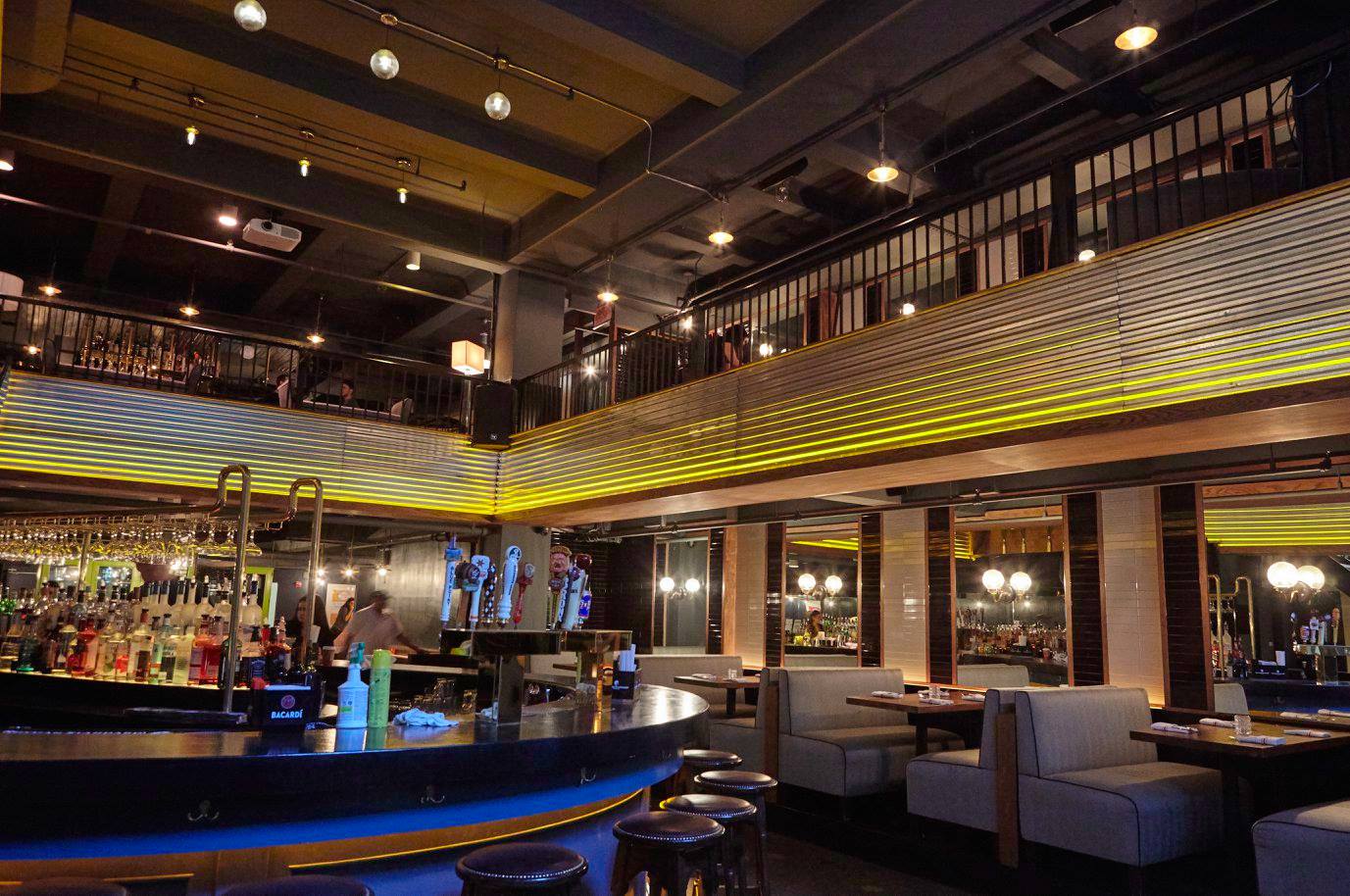 If maniacal Midtown makes you mad, take the edge off at 5th & MAD, a spacious party spot that feels like the racy suburbs, but still pumps with a city heart. Part lounge, part cultivated sports bar, part restaurant, huge booths rim the 45-foot black-wood bar ground-floor common area. But there is more. The bi-level gastropub rejoices Mad Men with an upstairs Draper Room (armchairs, suited mannequins), a Girls’ Lounge (appointed like a 1960s department store), and a lime-green pool room.

You’ll see a few suave types, but relaxation is the goal here. No bumping (unless that is what you’re seeking) in this Midtown social center. Politeness overtakes pickups, as this is also a great place to bring a first date (“or last,” which made my buddy laugh). The homemade menu—this is a real restaurant—features three-cheese mac ‘n’ cheese, old-style Irish beef stew, and the Galway Burger (Irish bacon, aged cheddar cheese, fried egg). The Irish-born GM Richie redoubles the spirit of this hotspot with a bit of harmless blarney…his vision come to life is why this still feels like an easygoing, fun pub with bargain happy hours (no reason to list booze choices, they have it all). And yes, I’ll take an Always Be Closing (Bulleit bourbon, prosecco, triple sec) for the road. Go.