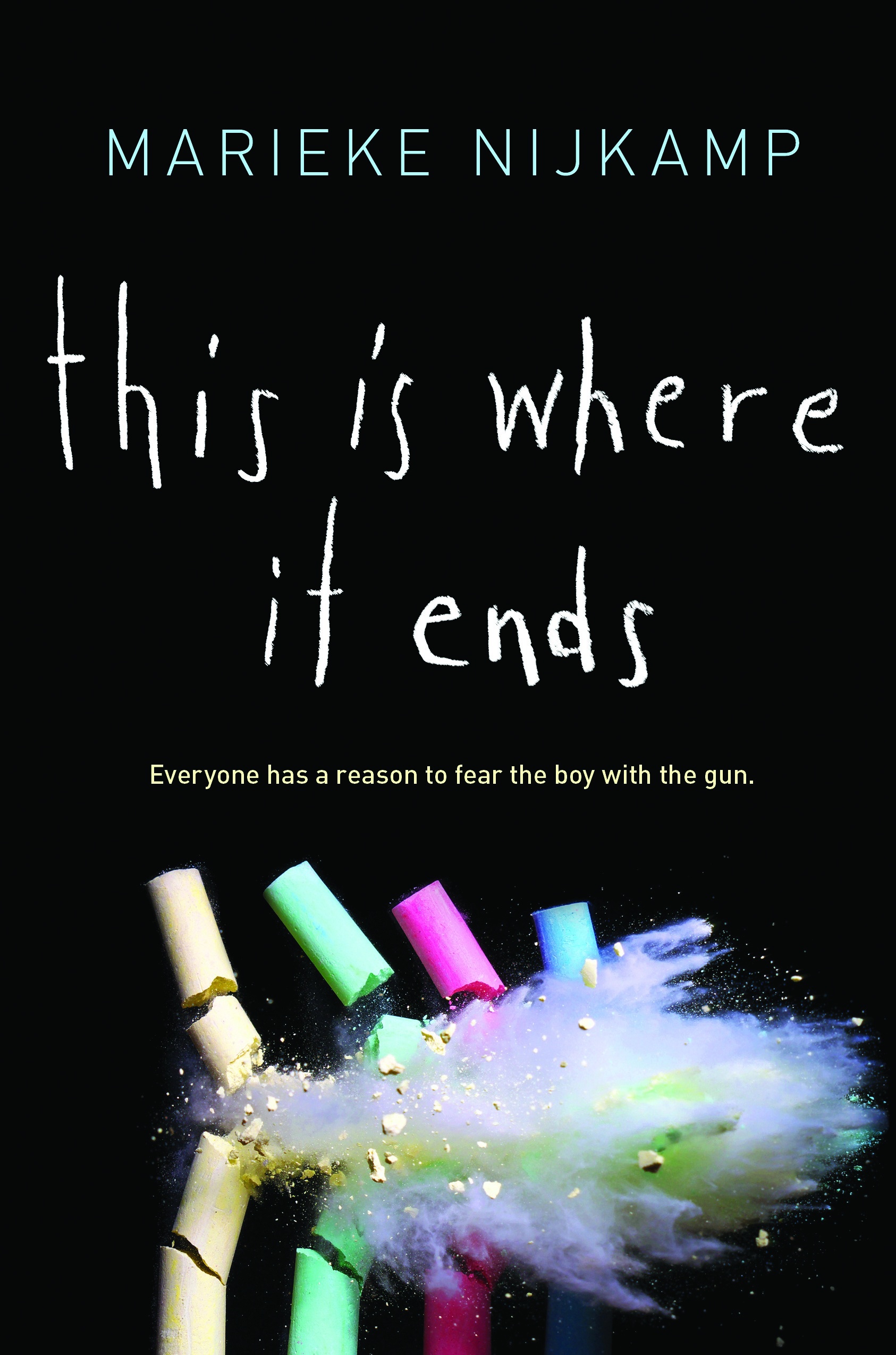 “This is Where It Ends” by Marieke Nijkamp

In every class, there are always a few kids you try to avoid.

The know-it-all kid, for instance: who has time for that? Or the kid who can’t stop yammering or who can’t control his temper: why invite drama? Why shouldn’t you avoid the school bully or, as in the new book This is Where It Ends by Marieke Nijkamp, the kid who simmers just beneath his skin…

Inside Opportunity High School, Principal Trenton had just finished her comments at daily assembly. They were familiar words and Tomás and Fareed would’ve mocked her, had they been there. Instead, because rumor had it that a boy named Tyler was returning to school and because Ty had been bullying Tomás’s sister, Sylvia, Tomás decided that a little break-in to the school office was warranted.

In the auditorium, the chair between Sylvia and Autumn was empty; Autumn had saved it for her brother and his absence made her nervous. Sylvia understood why: after the accident that took Autumn’s mother’s life, Autumn’s father started drinking; over time, he’d used his fists on both Tyler and Autumn.

Sylvia knew Autumn couldn’t wait to leave Opportunity. That broke her heart; she loved Autumn. She couldn’t make her stay–but she couldn’t bear to let her go, either.

The bell rang, which meant that students had three minutes to dash from auditorium to classroom. Tomás knew they’d mill around for a bit and that class wouldn’t start until the teachers arrived; their noise would give him and Fareed a chance to escape from the office. But there was no noise.

In the auditorium, students were confused. They tried to leave, but the doors seemed to be locked. Or stuck. Or –

And then someone began shooting….

Usually when I read, I’m a book-snacker: dip, taste, walk away, return, nibble, nibble, like a literary bag of chips. But this book–this one had me immobile for hours. All I could muster was a turn of page.

And yet, it absolutely wouldn’t be fair to say that This is Where It Ends is ripped from the headlines. It’s timely, but it’s not sensational like that. There are more than just headlines here: author Marieke Nijkamp also gives readers a story, told over the course of a mere 54 minutes. In that time, we get to know the kids at Opportunity High, their crushes, dreams, their fears, and their morality. That familiarity–as if these kids are your neighbors–will make you shudder.

Meant for readers ages 14-to-17, this is absolutely an adult book, too. If you can handle a novel that feels like yesterday afternoon’s news, then This is Where It Ends is one you truly shouldn’t avoid.