They say you never forget your first moose sighting.

“One evening sitting in the lodge it was hot, the windows were open and I could hear splashing. I looked outside and there was a young moose wandering around, splashing in the lake, guests all around, he didn’t mind,” Tenley Bennett master Maine guide and co-owner of the Fish River Lodge in Northern Maine said.

A stay at Fish River Lodge in Northern Maine almost always comes with a moose sighting. Guests often spot them near the lake at dusk, sometimes they’ll even catch them swimming from one side of the lake to the other. 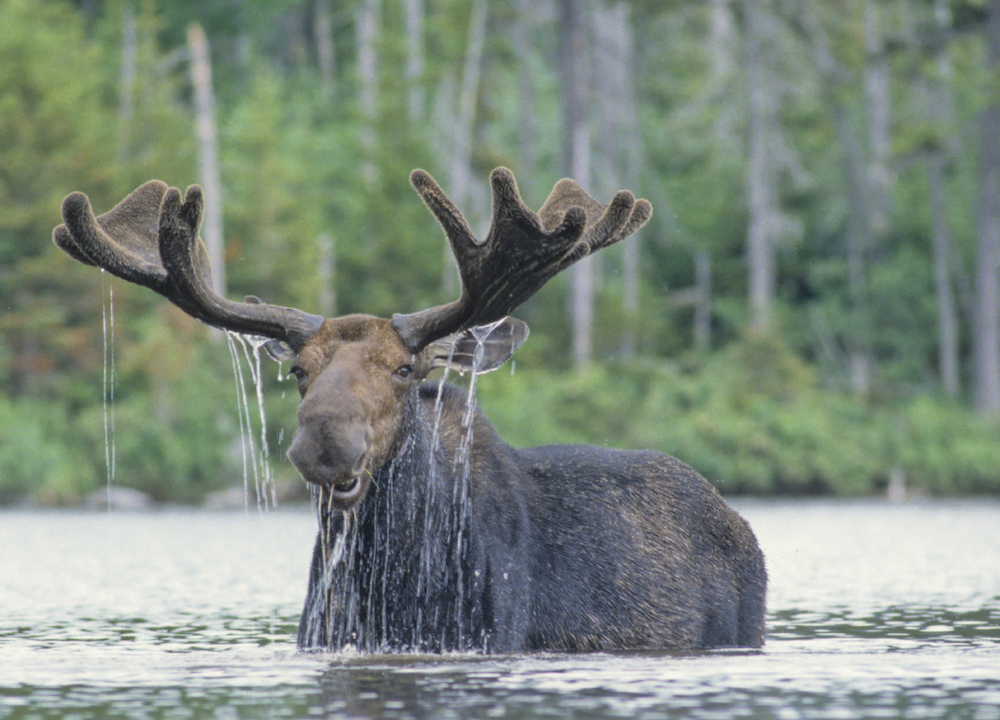 “People come to Maine to see moose in all seasons,” Bennett said. “They’re a very important part of the experience we offer our guests. Whether they are the subject of a photo safari, wildlife watching expedition, or hunt, we’ve got moose.”

Standing up to 6-feet tall at the shoulder and weighing anywhere from 600-1,200 pounds the males can have antlers that reach 5 feet in width. The females are a bit smaller weighing only 500-800 pounds and standing only about 5 feet at the shoulder. Seeing one is impressive but probably not something you want to see up too close. They can swim up to six miles per hour for at least two hours at a time and have been clocked running as fast as 35 miles per hour. In New York State, where they are the largest land mammals, you can spot them, if you dare, in the Adirondack Mountains and the Taconic Highlands. 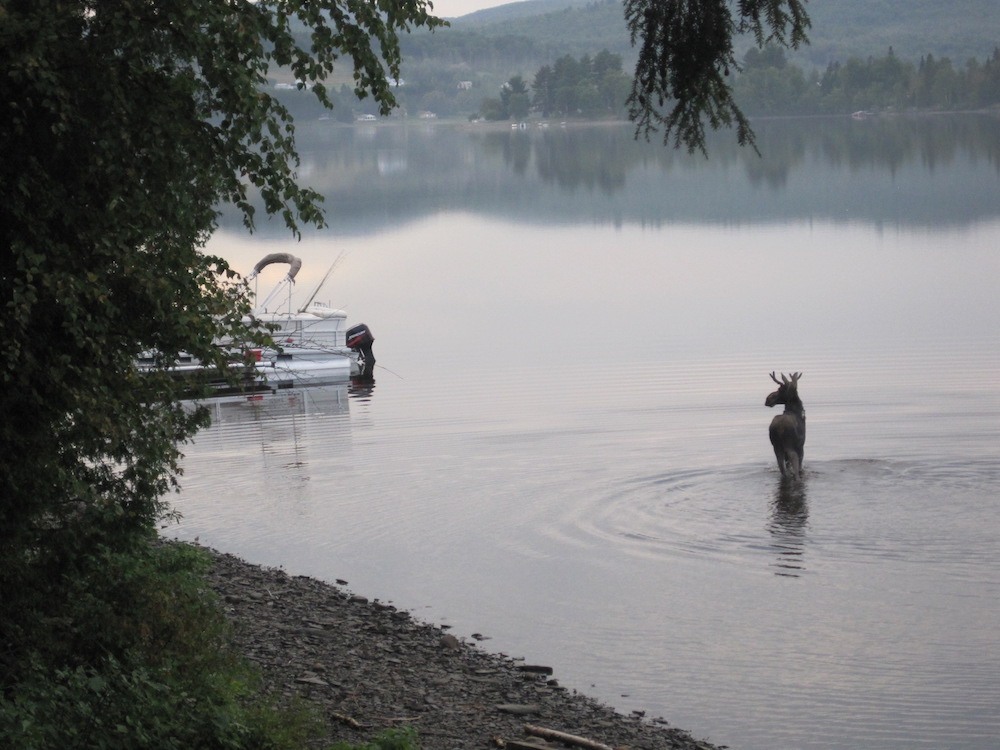 In Northern Maine, much like in New Hampshire and the northeastern part of New York, moose are vital to the economy. Visitors travel from all over the country in all seasons in search of them. According to the U.S. Census Bureau, wildlife watching contributed nearly $800 million to Maine’s economy in 2011, the latest figure available. In New Hampshire hunting and wildlife watching contributed more than $300 million.

“We once had one of our guides guiding a young lady who had never hunted moose before. She had a permit, was looking forward to that meat in her freezer and they came across a moose and a calf. The calf was very interested in the vehicle and they ended up with a photo of the baby moose reflection in the rearview mirror. We have those really close encounters,” Bennett said.

For Bennett, who grew up in Maine, the animals are plentiful. She’s seen thousands of the dark brown creatures with their long grayish legs. But still the moose population is closely monitored.

“I’m aware that others have seen declines. We bring in moose to tagging stations. They’ve collared 70 in the area where I live and they’ll be studying them in the spring, but we haven’t seen the drastic drops,” Bennett said. 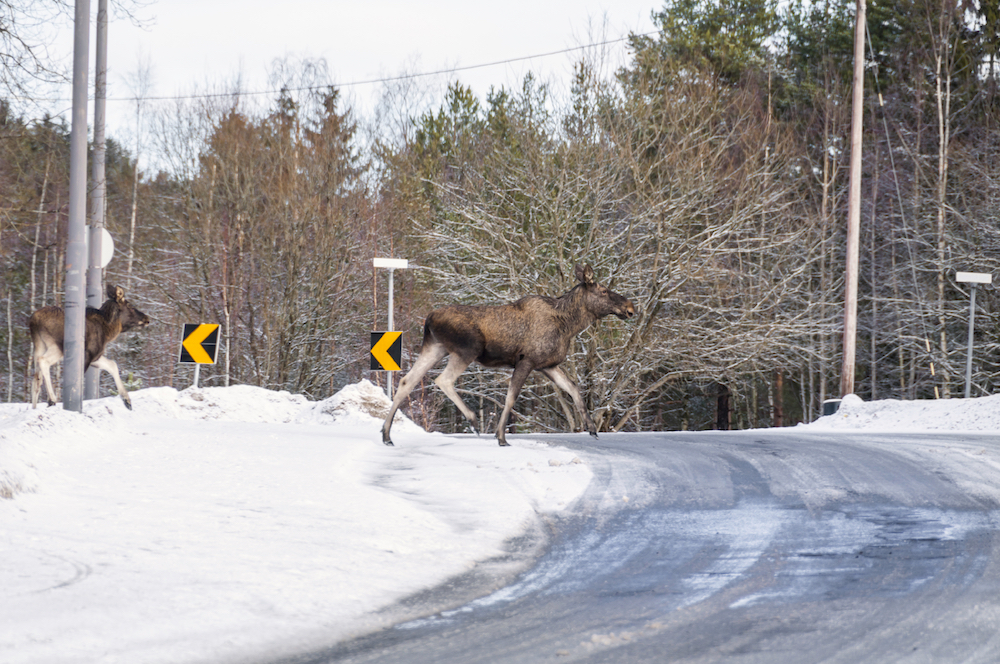 In New York the DEC estimates there are about 500-600 moose. They ask sightings be submitted online and there is some concern the iconic mammal is slowly disappearing. New York hasn’t seen the recent drastic drop Bennett mentioned but the DEC admits there is no standard way of estimating the numbers of the moose in the state. New Hampshire in contrast has seen the moose population decline from more than 7,500 to 4,000. The cause is still a bit of a mystery. Moose don’t have many predators. Black bears and coyotes pose a threat to the calves but wolves are the main predator. Vehicle collisions are a serious threat in densely populated areas. The most serious threat to the moose, however, may be global warming.

Warmer temperatures, especially in the summer, can cause them to hibernate, not eating and resulting in females giving birth to unhealthy calves. Warmer temperatures in the winter mean more parasites, especially ticks. One moose can hold 75,000 ticks and those ticks are literally causing the moose to eat themselves alive. As the ticks draw more blood the moose slowly starves its body taking protein from its organs and muscles. In that condition they often try to rid themselves of the ticks by rubbing off their fur resulting in white grayish moose that have been dubbed the “ghost moose.”

According to the DEC no ghost moose have been spotted in New York yet, but as temperatures continue to rise the long term sustainability of the moose is perhaps more in question now than at any previous time.