Break out of hibernation to enjoy some music and vino at 2016’s Winterfest: Live on the Vine. Choose from more than 70 concerts and wine events in more than 40 venues on weekends from Feb 19 to March 20. More than 30 emerging artists and headliners will perform music such as jazz, rock, folk, world and country in vineyard tasting rooms, boutique hotels and historic theaters throughout Long Island’s East End.

Faith discussed everything from the festival’s music acts and history to its distinguishing features and its future.

Long Island Pulse: How has Winterfest: Live on the Vine changed over the years?
Jim Faith: When I came on board in 2015 our intent was to start bringing in headliners, which we have done, and to open up the fest to other types of events. We’ve added a Gospel Brunch at Hotel Indigo, as well as a series of ‘Art of Wine’ events, allowing attendees to learn about the winemaking process, sample rare wines and meet the winemakers. In the future, we’ll open the fest up to more foodie events, art installations and possibly theatrical shows, utilizing the east end’s historic theaters.

Pulse: What musical acts are you most excited to see this year?
Faith: I’m very excited to hear jazz trumpeter Randy Brecker, a living legend who has worked not only with his own bands but with Bruce Springteen, Steely Dan, Frank Sinatra, James Taylor, Frank Zappa and so many more. The Dirty Dozen Brass Band, straight from New Orleans, will be a real party at Martha Clara Vineyards. And Amy Helm, a ‘darling of Americana,’ is back by popular demand. She blew everyone away last year at Hotel Indigo. Jefferson Starship was the hit of the night at the Great South Bay Music Festival last year. When they play Suffolk on March 19, they’ll be performing a tribute to (band member) Paul Kantner, who passed away a few weeks ago.

Locally, you want to watch out for Toby Walker, an amazing finger-picker, story-teller, singer/ songwriter who’s playing our kickoff concert on Feb 19. He’s a guitar phenom, who is one of the main teachers at Jorma Kaukonen’s legendary Fur Peace Ranch. 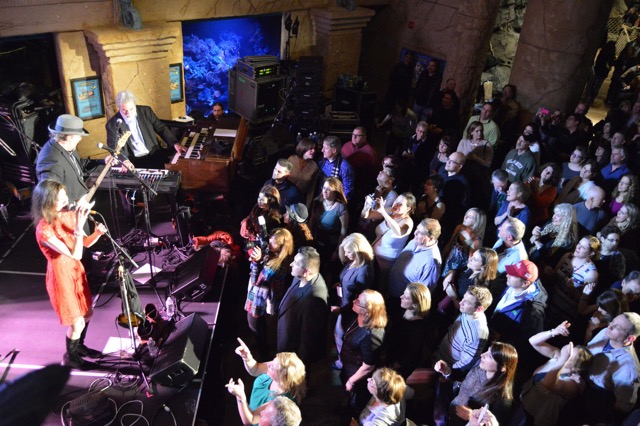 Pulse: What distinguishes Winterfest from the other festivals you produce?
Faith: The main difference from any other festival in the world is the stunning location. The East End of Long Island is, in my eyes, one of the most peaceful, beautiful and cultural locations in the Northeast. The Great South Bay Music Festival, which we produce in July, is also popular in no small way because of the beautiful location right on the Great South Bay—it’s the ‘coolest’ place to be if you’re going to be outside in the hot July sun.

The real story behind the not-for-profit Winterfest is that it was created in 2006 by East End Arts, LI Wine Council, and the LI Convention & Visitors Bureau to bring people to the region and give musicians work during the slower months. It’s great to witness the arts partnering with LICVB and local businesses to stir up the economy in a location that would be having a hard time. Now the hotels, deli’s, restaurants, vineyards and venues are filled. The icing on the cake is giving people something to do in February and March, while feeding Long Island culture and the economy.

For tickets to Winterfest: Live on the Vine events, click here.