It took just one visit from Shelby, a beautiful black and white Border collie puppy, to bring a deeper form of education to Shell Bank Intermediate School in Brooklyn.

Shelby arrived at the middle school in October of 2014 for an educational assembly as part of North Shore Animal League America’s Mutt-i-grees Curriculum, an approach to teaching children social and emotional skills with the assistance of shelter pets. It was supposed to be a one-day outing for Shelby. Instead she found a new home and continues to make an impact far greater than anyone at the school ever imagined.

“This little puppy stole the hearts of everyone here from the second we saw her. You could see there was just something special about her by how everyone, especially the children, interacted with her,” Principal Teri Ahearn said.

Located in Sheepshead Bay, the Shell Bank Intermediate School provides an outlet for 560 impressionable sixth, seventh and eighth grade students. As a first-year principal Ahearn knew test scores and grades were important but she knew there were also many life lessons a textbook can’t teach. She introduced the Mutt-i-grees Curriculum as a way to enrich the lives of the students.

“The Mutt-i-grees Curriculum is such an asset because it meets the social and emotional needs of the students, but when I saw the impact of actually incorporating dogs and puppies in the classroom a light bulb went off.” 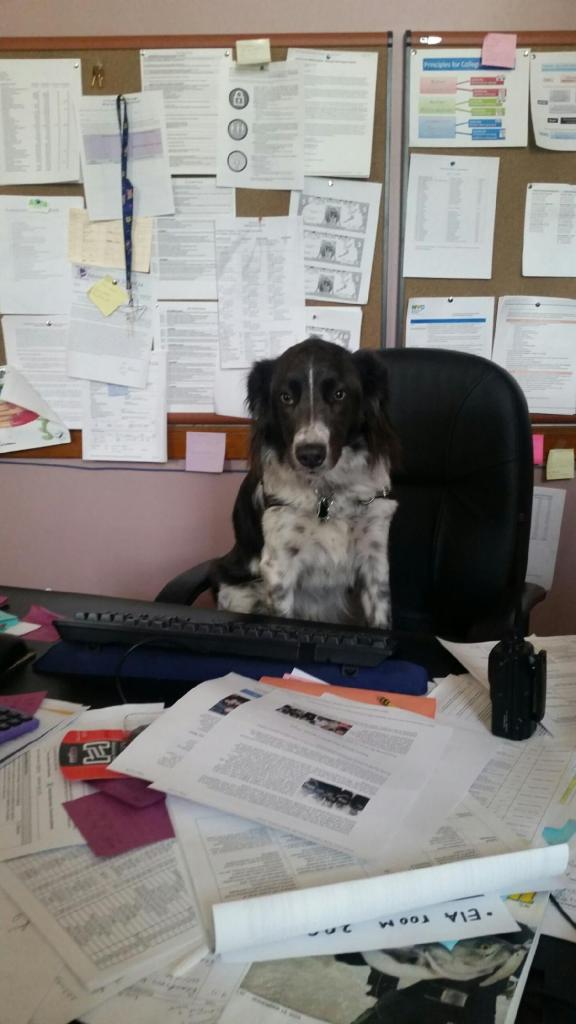 Shelby made such an impression on Ahearn and many of her colleagues, including special education teacher Denise Atwood who instantly felt such a kinship to the adorable Shelby, that the Shell Bank faculty decided to make Shelby an official part of the school’s family. Atwood adopted Shelby and within four short months the rescue dog became not only a certified service dog but also a permanent fixture in the Shell Bank Intermediate School.

“My previous dog, who I adopted from North Shore Animal League America, passed away about five years ago, so I’ve been waiting for a special one to come along for quite some time now. No dog can replace him, but when I met Shelby I knew she was something special,” Atwood said. “When Teri reassured me that this would almost be a joint adoption and that Shelby can spend most of her days here at the school, I didn’t need to hear any more. I knew she’d be a great asset to the kids, as well as a great pet to all of us here. Everyone needs the kind of love a rescue dog gives.”

Most days the rescue dog can be found lounging in Ahearn’s office, going for walks with some of her favorite faculty members and simply enjoying the pampered life every dog deserves. When not socializing, Shelby is working as a productive member of the Shell Bank staff. She plays a role in teaching the Mutt-i-grees Curriculum to the students, and recently, she’s become an addition to another classroom. There she interacts with students and teaches them about compassion, empathy, acceptance and confidence, by showing the type of unconditional love that comes naturally to her. Ahearn said there is a strong possibility they will use Shelby even more in the future, and they are also entertaining the idea of implementing more classes that will incorporate many principles of the Mutt-i-grees Curriculum.

“You can tell that Shelby has unlocked something within the kids here,” Atwood said. “If they are having a bad day or are dealing with an issue that has them in a funk, she is there to brighten up their day. Since she’s been here, she’s been around nothing but unconditional love and affection, so that’s all she knows. It translates over to the kids when they are around her. She’s got such a unique ability to bring a calming feeling over everyone she interacts with.”

Not only is Shelby’s presence in the school a security blanket of sorts for many of the students who rely on her lovable, non-judgmental nature to get through the day, but she’s also just as comforting to the staff. Even if that comfort comes in the form of the frenzied wag of her tail, a big wet kiss, or simply being there to greet everyone when they walk by Ahearn’s offic.  Shelby simply makes the work day seem a little less monotonous for the Shell Bank faculty.

“I like to say Shelby is my therapist,” Ahearn said. “She helps me keep my sanity when times get tough and I have a million things on my plate. When I’m in the building she is always there to make me feel better. Then I go home and I have two dogs of my own to do the same thing. It’s really a win-win.”