Plenty of homeowners dream of knocking down walls to create the ever-popular open floor plan, but it’s rarely an easy feat. Factors like load-bearing walls, competing color schemes and the flow of traffic can all complicate the matter. For designer Mary Meyer’s client, the biggest concern in her home remodel was maintaining a harmonious palette across the newly combined living, dining and kitchen spaces.

“The color scheme was really important to her because she wanted the downstairs to be cohesive since everything would be open…She really had her heart set on the gray tones,” Meyer said.

After buying her childhood home from her parents, the homeowner wanted to put her own stamp on it and open the main floor. However, the fireplace in the center of the living room posed a problem. 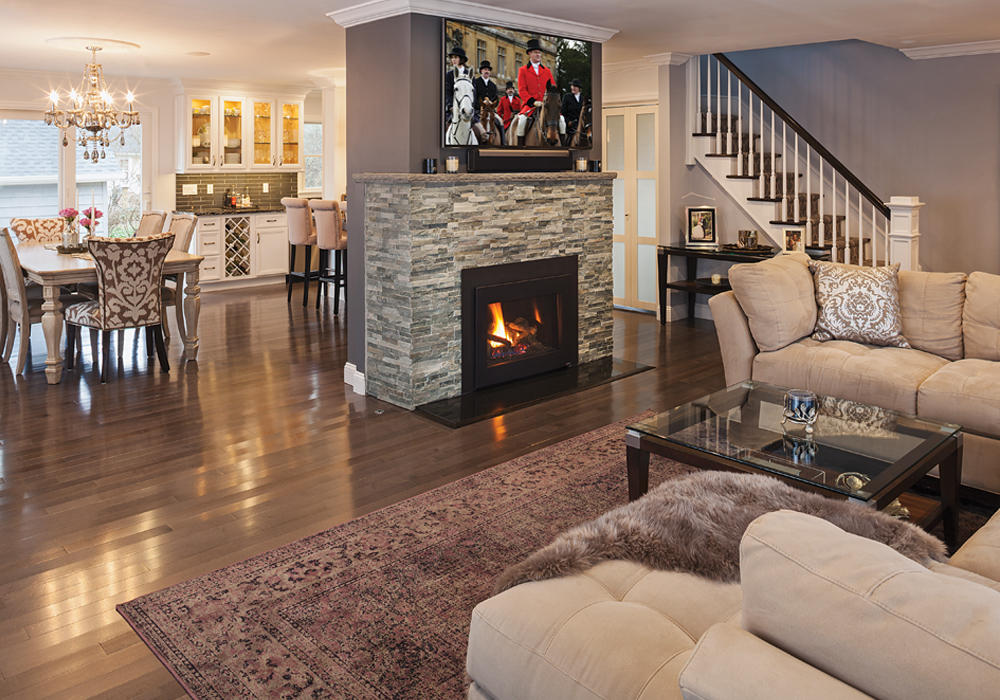 The fireplace wall is painted a darker shade of gray than the rest of the room, further enhancing its status as the heart and hearth of the home. image: peter edison

As the main partition between the living and dining areas, parts of the load-bearing wall needed to come down, while still keeping the fireplace as the functional centerpiece. The solution was to reinforce the center of the wall and open it up on the sides.

Now floating in the middle of the room, the fireplace acts both as a focal point and a visual divider between the space for lounging and the areas designated for eating and cooking. Of course, because of it’s new prominence in the design, the mantel then needed a facelift. The original brick façade was carefully removed piece-by-piece and re-covered in hand-cut gray stone. Luckily, the meticulous work was a family affair. “That was a huge labor, taking down everything. Her father helped a lot with that…[He] was almost like the head contractor, a lot of things went smoothly because of him.”

Once the new floor plan and color scheme were established, Meyer’s attention shifted to the decorative details that tie the design together. Modern pieces like the Lucite waterfall table in the dining room and the clear-coated frameless horse portrait combine with more traditional aspects such as crown molding and built-in bookcases for a transitional style. “Trying to find those little elements—like the rug—were tricky because she did want to incorporate a little color, but we still kept it in that dark gray tone,” Meyer said. “Purple complements the other colors, but doesn’t take away from the rest of the space, so in the bookshelves across the room we were able to incorporate some touches of purple.”