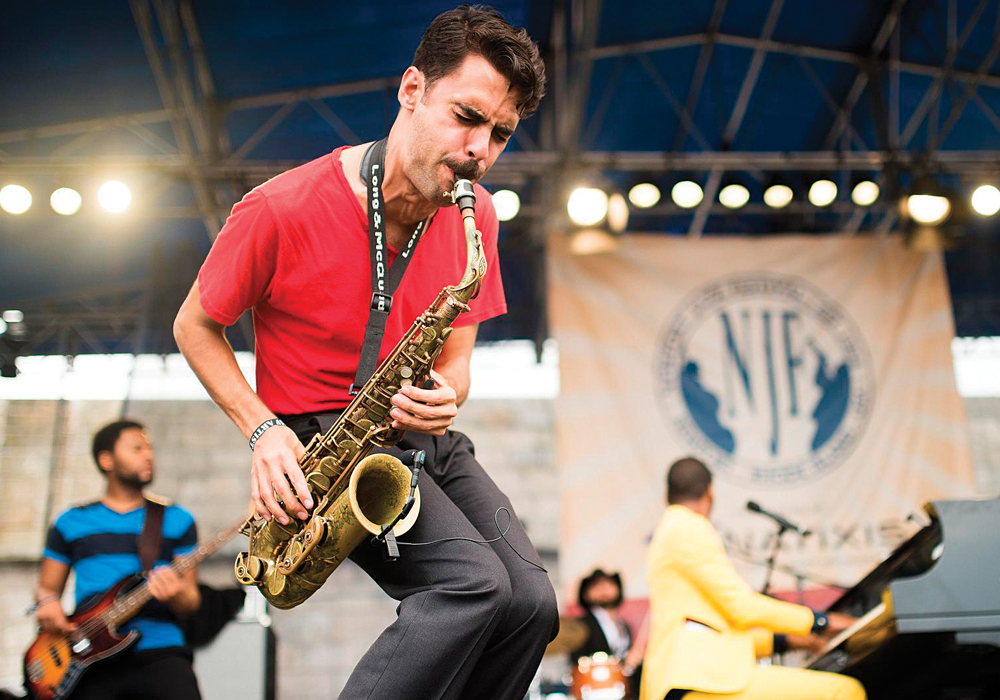 As a professional musician, Eddie Barbash wasn’t used to a 9-to-5 routine. In fact, he never had a day job before September of last year when his group became the house band for The Late Show with Stephen Colbert. The West Islip-born alto saxophonist has been a core member of the jazz-based ensemble Jon Batiste and Stay Human since 2007, when he and his bandmates were all studying at Juilliard. Known for energetic shows that engage millennials, they mean to eradicate stereotypes about live jazz and bring people of all ages and backgrounds together in a New Orleans-style second line parade.

And that’s what they did when they performed on The Colbert Report in 2014. Jon Batiste and Stay Human took their uplifting music to the New York City streets with Colbert and the studio audience dancing in tow. The response was immediate and the band’s 2013 album Social Music went to the top of Billboard’s jazz charts. “Our tryout for The Late Show was playing on The Colbert Report,” joked Barbash, who was also a member of Americana band The Amigos. “But the show is the best publicity we could have. So many more people are taking notice of what we’ve been doing.”

Outspoken fans of Jon Batiste and Stay Human now include Brooke Shields, George Clooney, The Roots’ Questlove and Olivia Wilde (who was famously dancing at their show before giving birth to her son). Pulse checked in with the 27-year-old mustachioed Barbash to find out what was new since we featured him and The Amigos in November 2013, talk about his road to The Late Show and the highlights of his new gig. 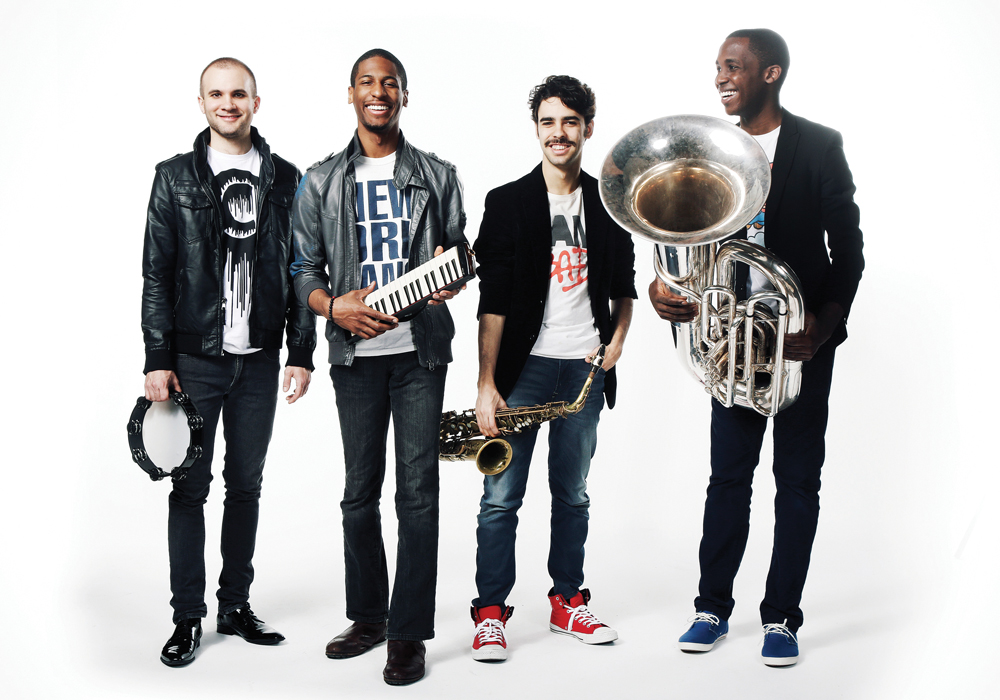 Long Island Pulse: How did you get into music?
Eddie Barbash: My father is a music lover and he made me play piano when I was a kid. I was never too serious about it, but listening to music has been very important to me since I was a baby. Apparently I used to scream and insist on listening to the same Riders in the Sky song over and over when I was two years old. I started playing saxophone in third grade when I joined the school band. I saw a picture of it on the band room wall and I thought, “That looks weird, nobody plays that.” So I picked it as my instrument.

Pulse: How has your schedule changed since you got The Late Show gig?
Barbash: It’s really my first time having a day job. I wasn’t used to going to the same place and doing the same thing everyday for eight hours or more. A couple of years ago we were on tour for nine months, so we definitely had to tone down our schedule. We haven’t been playing in the subways as much but we’re still working. It’s just important to find the energy to do other things, whether it’s practicing your instrument or playing gigs after the show.

Pulse: What’s it like working with Stephen Colbert?
Barbash: Stephen is really smart and he always remembers everybody’s name. He’s very nice and makes a point of saying hello to everyone around him. But at the same time, there’s no fluff whatsoever. He’s really direct and doesn’t waste any time saying what he needs to say to get stuff done. Stephen’s definitely an improviser, being very capable of just letting it fly when the time is right, but he also likes things to be tight. And he has an insane amount of energy, which to me, is one of the most admirable things.

Pulse: It was great seeing you play with The Zombies on the Halloween show. What’s been your favorite musical experience on the show so far?
Barbash: I love The Zombies and that was really fun, but getting to play a duet with Yo-Yo Ma was definitely my favorite moment. We were accompanied by the band and played “The Swan” from The Carnival of the Animals by Saint-Saens. It was just so much fun to try to match Yo-Yo Ma’s sound and then to try to match his phrasing. One of my favorite things about playing music is playing the slow, pretty stuff. Getting to do that with someone who excels at it was great.

Pulse: I heard you like to sneak fiddle tunes into some songs.
Barbash: There’s a song we play when Stephen comes running out and everyone’s cheering. At the end of that song, I’m playing through the section when Stephen and Jon are dancing together and I try to sneak a really old fiddle tune in each night. Two that I incorporate pretty often are “Tennessee Mountain Fox Chase” and “Cumberland Gap.”

Pulse: What have you learned from being on the show?
Barbash: I’ve never been politically active but I’m actually learning a lot just by being on set everyday and hearing Stephen. I mean the material is funny but it covers just as much politics as the news does. I’m still not a political diehard in any one direction but, for the first time, I feel more justified in starting to have opinions about what’s going on from hearing the politicians talk and seeing them in person.

Pulse: When you went on The Colbert Report did you ever get a sense it could lead to something bigger?
Barbash: It didn’t really cross our minds but people who worked for Colbert were saying, “You know, he’s going to be looking for a band for The Late Show…” I think Stephen and Jon just really hit it off. They share a lot of the same values and are in entertainment for many of the same reasons. We were incredibly lucky to get a gig that only comes around once every 20 years. I think it’s incredible that we happened to be at the right place at the right time.