The ingredients for success are simple, according to three Long Island entrepreneurs who started local businesses that grew into national companies: passion, perseverance and luck. But for these three, raw talent, community support and starting out young were also key components of the recipe. These auspicious businesspeople shared their experiences and provided an in-depth look into their triumphs, tribulations and decisions to expand nationwide. 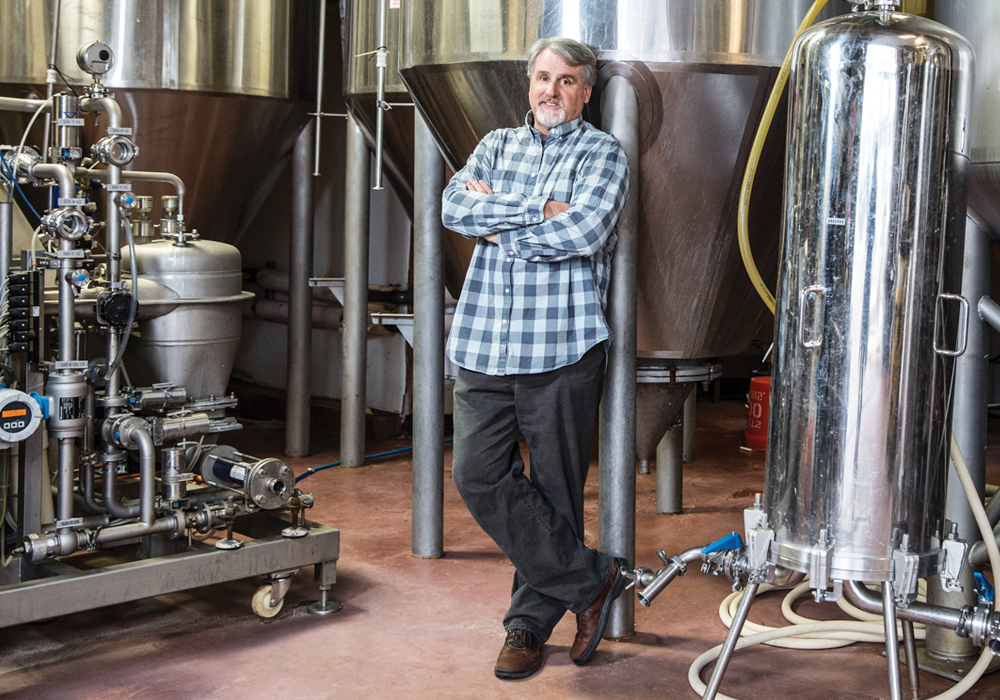 When Mark Burford was in his teens in the 1970s, brewing beer at home was illegal in the United States. That didn’t stop the North Babylon native from helping his older brother experiment with the hobby, or from later pursuing it as a career option that would lead to international success.

Burford got his first taste of that business in the early 1980s, shortly after home brewing was legalized, when he moved to California where the microbrewery movement had begun to take off. After a few conference seminars on the subject, he returned to Long Island and opened his own home brew supply store in Floral Park. He worked for the Long Island Brewing Company and then became head brewer at the Cobblestone Winery and Brewery in Huntington, learning as much as he could along the way. When the time came to launch a business, Burford was ready. “It was the right time in life and it was my passion,” he said.

Burford joined forces with fellow brewer Peter Cotter in 1998 and the pair established the Blue Point Brewing Company, one of Long Island’s first microbreweries. He poured years of study, practice and heart into what began as a fun brotherly hobby and it led him to the top of a slowly emerging field. “We were early to the game here on the east coast, so that was one of our biggest advantages,” Burford said. “And we kind of had the vision to see that it was going to be a growing business.”

They started in a small space in Patchogue selling only draft beer and working with local bars. It was a constant but exciting challenge to make, sell and distribute beer, as well as buy equipment. “We were always one step away from impending doom, but we put every penny and every ounce of focus into making good beer.” It paid off.

After about seven years of consistently reinvesting in the business, a local Anheuser-Busch distributor picked up Blue Point beer, setting off a chain reaction that helped the company expand its reach into the national market. Among Burford’s most memorable moments was being able to purchase his own beer at a Met’s game at Citi Field.

In April of 2014, Burford and Cotter sold Blue Point to Anheuser-Busch and watched it become a global brand. Burford is still an advisor to the company and said there are plans to expand the Patchogue facility, which is still Blue Point’s headquarters and a location he is proud to have chosen as a starting point. “It changed around us and we were part of the whole renaissance of Patchogue as it went forward.” 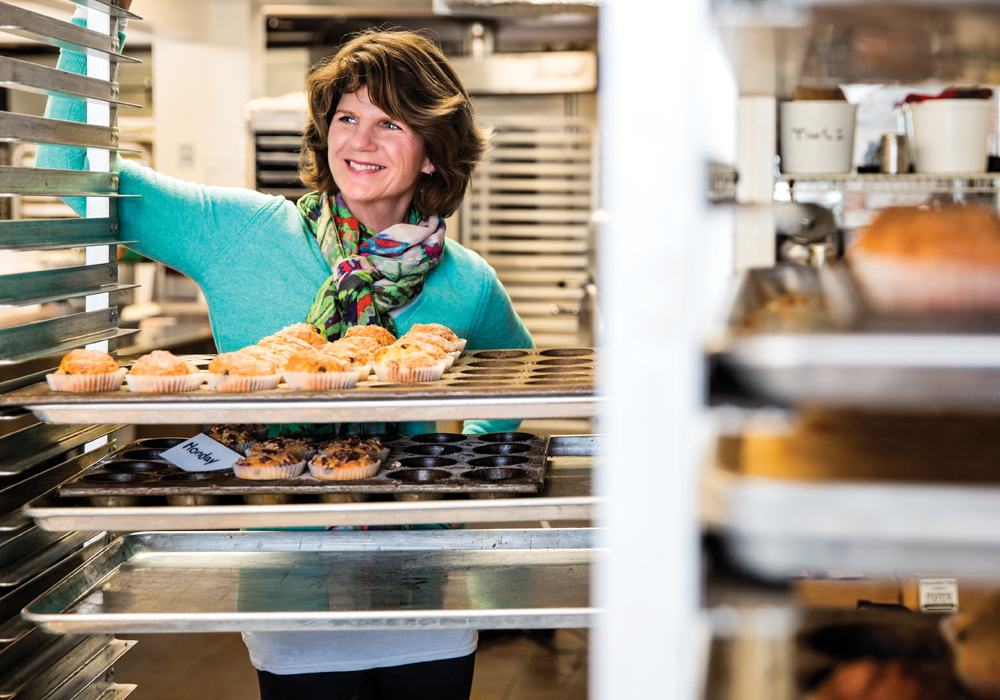 Born and raised the youngest of four on a dairy and poultry farm in Southampton, Kathleen King has always had what she calls a tremendous work ethic. “It was all about getting the job done. There was never a day off; even on Christmas the cows have to be milked,” she said. It was that attitude that led her to open her own bakeshop in Southampton at the age of 21 and to eventually create Tate’s Bake Shop, a nationally recognized cookie brand that sits on the shelves of hundreds of retailers and chains throughout the country.

King started baking and selling cookies on the family farm when she was 11. She’d developed a loyal following by the time she opened shop in 1980 and began wholesaling to local retailers. “I always had a niche with the farm stands,” King said, noting that in the 80s that was where many Long Islanders shopped for groceries.

Despite the success Kathleen’s Bake Shop enjoyed in the summertime, winters were admittedly challenging, thus she decided to try expanding outside of Long Island. She packed a box full of her classic chocolate chip and oatmeal raisin cookies, added a few muffins, apple pies and carrot cake slices, and set off for New York City. She walked door to door to some of the most high-end and well-known gourmet eateries hoping to get picked up. And she did.

“I walked into a Balducci’s because some of my customers said it was a good store…and I got a large order just standing right there,” King said. Soon after came Zabar’s, Dean & DeLuca and even the Barefoot Contessa. Within two years, King outgrew the bakery’s rental space and realized it was time to purchase a bigger building.

In 2000, King made a naïve business decision, essentially giving away two-thirds of the business to partners who respected neither the product nor the customers, and lost the rights to Kathleen’s Bake Shop. Entangled in legal battles and debt, she lost the business she’d worked so tirelessly for two decades to create. But, farm girl that she was, it didn’t stop her from trying again. She took her experience, ambition and beloved recipes and started over with Tate’s Bake Shop, named for her father. Again, King built her business from the ground up and made her products a household name.

“Success is hard work. So I’ve learned that working hard is important, but luck and perseverance are a big part of it. I think it was my destiny,” she said. King sold her company in August 2014 after 35 years in the business, noting that it felt like the right time to retire and enjoy some downtime, but she remains a shareholder and continues to develop recipes. 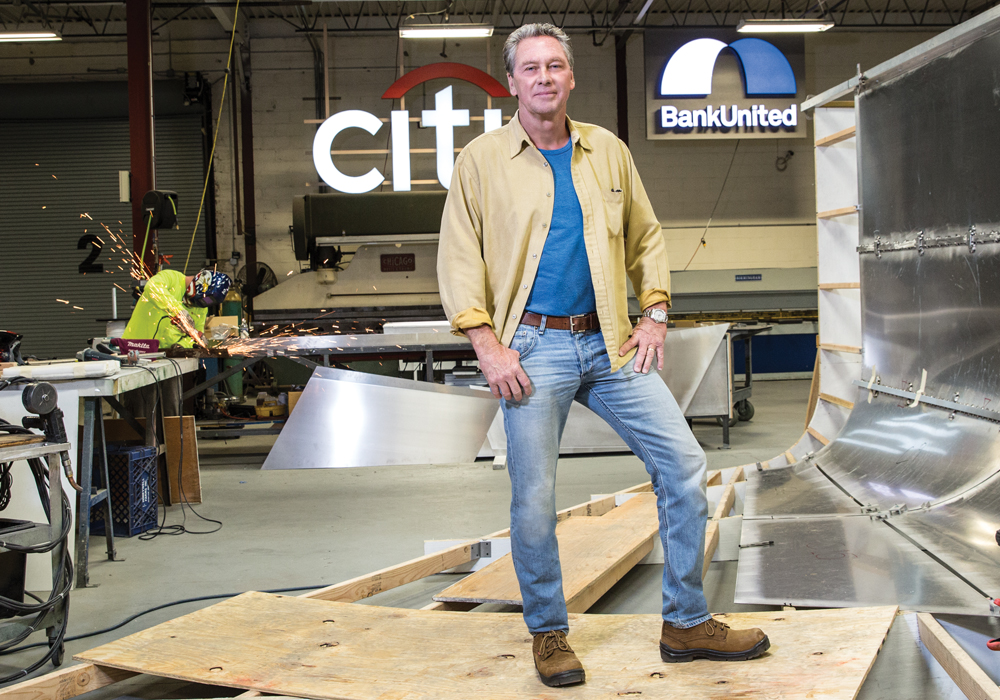 It was through a high school girlfriend’s father that Jeff Petersen was introduced to the sign business. At only 16, the Massapequa-based Petersen started working for Kal Signs, owned and operated by Kal Seinfeld, father of actor Jerry Seinfeld. Exciting as it might have been to work for a Seinfeld, it didn’t compare with the business connections Petersen would find himself making as an adult. His company, American Signcrafters, has made and hung signs for some of the biggest banks, retailers and venues throughout the country, including the Barclay’s Center, Wells Fargo, Nordstrom and Macy’s.

Petersen started humbly with an apprenticeship with Local 137, a sign hangers union in New York City, and worked on signs for buildings in Times Square. To further ply his trade, he moved to Hawaii for a short time in his early 20s and spent his days trolling Waikiki Beach collecting broken neon to sell for repair.

By the time he returned to Long Island in 1979, he was prepared to open shop. He and a partner, Tim Burns, founded TJ Signs in a 500-square-foot bay inside an auto body shop in Amityville. The pair worked primarily with local Long Island businesses, but set their sights on national chains and developers, which would lead to more challenging and lucrative opportunities.

Their first big client was Party City. “I was actually hanging a sign…on the truck, physically operating the boom, and this guy approached me and said he needed a sign for his party goods store,” Petersen said. “It turned out to be Steve Mandell, the founder of Party City. The rest is history.” Soon after, Party City expanded to 600 stores throughout the U.S. and Canada, and Petersen was there to do all of the sign work.

Although growth was gradual, Petersen said there were definitely some “a-ha moments” when his success would strike him as surreal. When Melville-based North Fork bank was acquired by Capital One and needed new signs for nearly 400 locations, Petersen was called to take on the task. The $20-million project immediately qualified him to work for other banks and high-end companies.

In the mid-1990s, Petersen bought out his partner and renamed the company American Signcrafters—a more fitting name for his now national status. He acquired businesses and properties in Florida and New Jersey and moved to a 28,000-square-foot facility in Islip. Petersen is the company’s CEO and remains involved in the business’s daily activities. Although he’s planning a possible expansion in Texas, where the company is currently working on 200 signs for Wells Fargo, the possibility of retirement is not far off. “I’m looking to put a couple more pushpins on the map…I worked real hard and it’s time to enjoy it.”