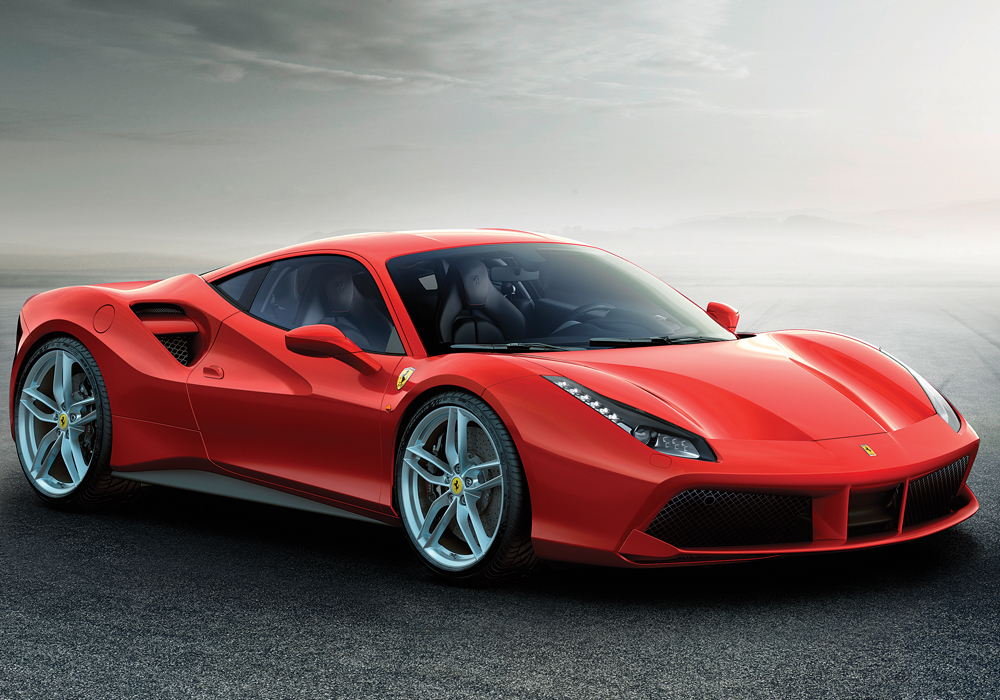 The front Aero Pillar and F1-derived double spoiler mean business and add a certain ferocity to the face of the 488.

Few automotive marques say “no compromise” like Ferrari does. It has to do with the manufacturer’s laser-like focus on a design brief that sets the benchmark for engineering and technology, styling and aerodynamics, performance and build quality. Like an entertainer whose athletic abilities and acumen match his looks and personality, Ferrari excels at each so effortlessly that it almost seems unfair.

Introduced last year, the 488 GTB and its drop-top counterpart, the 488 GTS (“S” for spider), put a literal twist on the formula—their engine displacement shrinks from the previous 4.5-liter capacity to 3.9 liters. That twist comes by way of twin turbochargers. The addition of these beau- ties boosts power to 661 hp, with 561 lb-ft of torque at just 3,000 rpm, both numbers representing per-liter records for a Ferrari road car. By comparison, its predecessor, the 458 Italia, had an output of only 562 hp and 398 ft-lbs of torque—and that at a whopping 6,000 rpm. But turbocharging benefits are not just more horses and greater, more flexible torque. It’s about increased efficiency, lower emissions and even better fuel economy.

Inside, the two-seat cabin is a splendid combination of hand craftsmanship and future-think. Superb ergonomics, comfort- able sport seats and a sense of space are enhanced by a wide windscreen and plenty of foot room. The central tunnel is asymmetrical and the dash layout is compact. It employs what Ferrari calls “satellite pods” directed at the driver. They contain vital information and controls not integrated into the steering wheel—absolutely the best of any road car’s. The wheel itself houses the turn signals, the horn, engine start button and the all-important Manettino dial, which allows the driver to select Wet, Sport, Race or traction-control override modes (at his or her peril). Set to Race, the 488 is an intimidating creature; its Sport persona makes it a more composed and agreeable machine. Actually, to call the 488 a machine seems a bit uncharitable, as it embodies a spirit unique to cars badged with the Prancing Horse.

Other delights await the driver who explores the engine with a determined foot. The 488 revs high and fast. And thanks to its flat-plane crankshaft and long, equal-length exhaust headers, makes sounds that inspire euphoria with every shift of the seven-speed F1 dual-clutch paddle-shift transmission. Shift quickly and the 488 GTB gets to 60 mph in less than 3 seconds; past 120 in less than 8.3. But the delights of such sophistication and complexity go far beyond its powertrain. 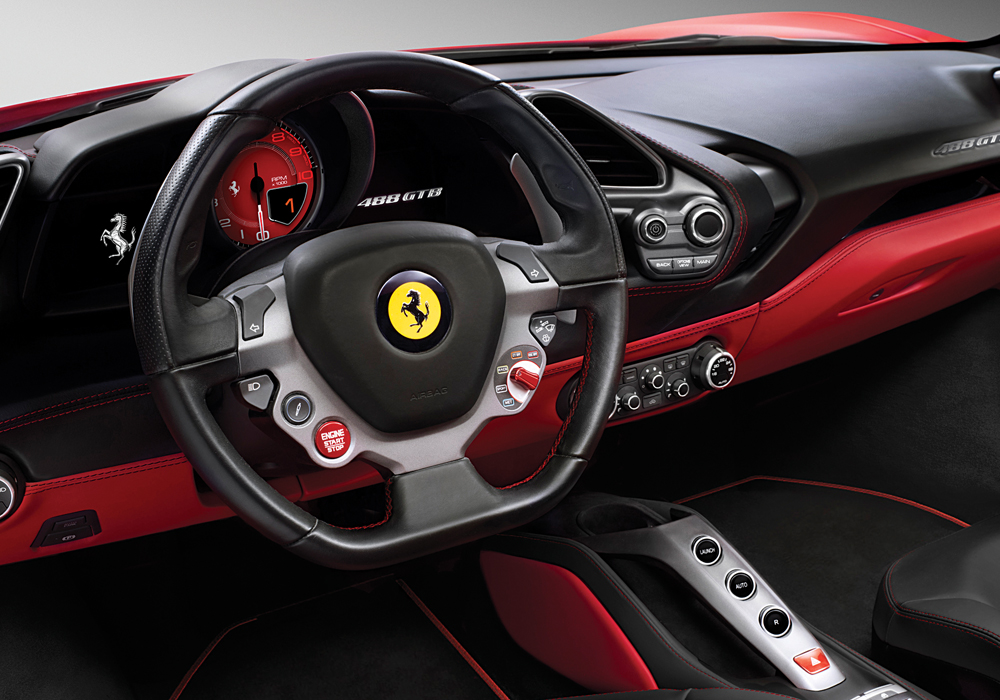 The Ferrari 488 GTB boosts the benchmark, yet again

As a package, the 488 is as perfect a road-going sportscar as exists today—on paper, on the street and on the circuit. Aerodynamics and vehicle dynamics play a big role. The first enhance efficiency, maximize downforce and minimize drag. The second—the mature chassis, suspension, braking and electronic management systems—allow average drivers to perform like accomplished track stars. Competition-bred advances in active aerodynamics give the 488 50-percent greater downforce than its 458 predecessor, while simultaneously reducing drag.

Unseen, but working its aerodynamic magic, is the car’s under-body, with vortex generators and appendages that provide additional suction without inducing drag. Gaping side air intakes behind the doors cool engine internals, managing airflow and drag while confer- ring serious attitude. A rear diffusor with CPU-controlled, variable- flap geometry manages downforce and drag, while another intake at the base of the rear windscreen acts as a sort of invisible spoiler that exits air from the rear bumper, from which two fat pipes emerge to exhaust the engine’s bellicose fury.

Magnetically-damped shocks deliver a smooth ride on even raucous surfaces (think spring on the LIE after it’s pock mocked by winter ravages). The near-telepathic steering is progressive and not over-assisted or intrusive. Ferrari’s SSC, or Side Slip Angle Control, utilizes software that analyzes dynamic data to optimize traction and torque distribution. Optional forged rims trim almost 18 lbs off the 3,252-lb curb weight, making the 488 GTB relatively svelte for a 2016 production car.

Like all Ferrari automobiles, the $242,737 MSRP can spool up as quickly as its turbos, and it is not unreasonable to add $100,000 of optional carbon fiber, exterior and interior appointments, paint, audio and telemetry systems with Ferrari’s Personalization Program.