Not to be overly bleak, but the start of the Northeast 2015/16 ski season was one of the most dismal in memory. New York City had its warmest Christmas Eve on record, reaching a high of 72 degrees, just three degrees cooler than it was on July 4th. Even the January blizzard that blanketed much of the East Coast left most of the ski resorts untouched. But it’s not too late to salvage the season and book a last-minute ski trip before spring has sprung. Out West, El Niño has delivered epic conditions in what many have been calling the best ski season in decades, with resorts from Lake Tahoe to the Rockies reporting up to 200 inches of snow. For those ready to take a gamble on a late-season trip, these mountains are offering the best bets right now. 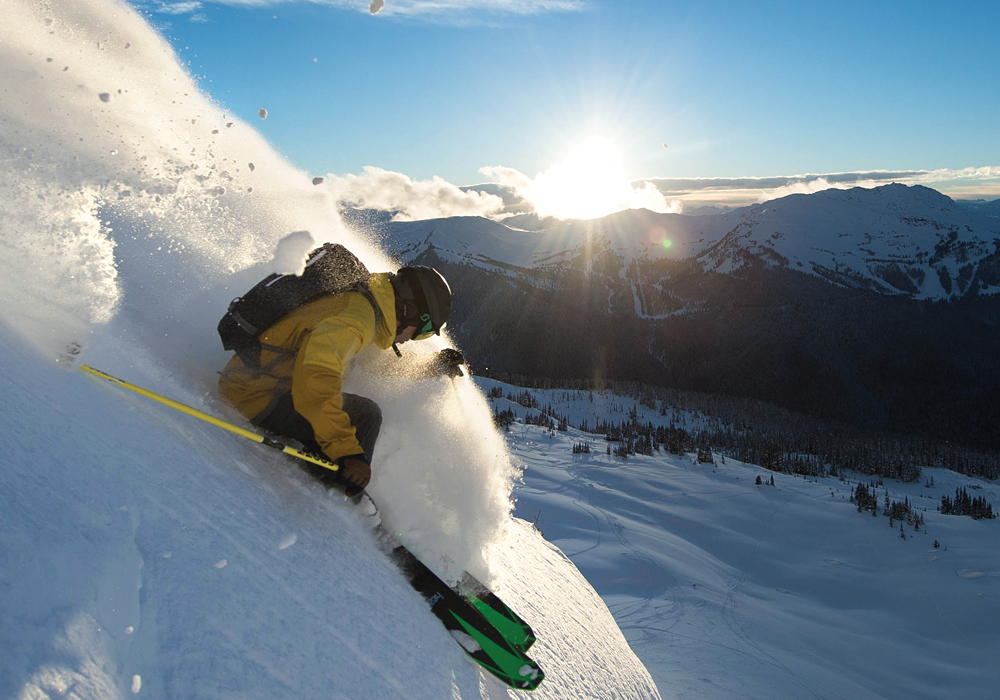 Looking at the snow-capped Sierra Mountains that surround Lake Tahoe, it’s hard to believe that a severe drought still plagues California—Mother Nature’s been delivering the white stuff a foot or more at a time. Myriad resorts surround the lake, but one of the best is Heavenly. And the name delivers: 4,800 acres of skiable terrain makes it one of California’s largest ski resorts offering, well, everything.

Jet Blue now offers nonstop service direct from JFK to Reno-Tahoe International Airport. Present a day-of boarding pass and photo ID at the resort to ski for free the afternoon of your arrival. Once the official Heavenly lift ticket has been purchased, it can be used at nearby Northstar and Kirkwood resorts as well, offering a great way to sample north and south Lake Tahoe all on the same trip. On the mountain at Heavenly, don’t miss Ellie’s trail. Though it’s labeled a black diamond, it skis more like a blue intermediate. And the stellar views of the lake stretched out below are stunning.

Après Ski
The town of Stateline, Nevada, a stone’s throw from the base of Heavenly’s gondola, offers a cluster of casinos. For the laid back, the California side of Heavenly is where a more understated respite can be found. Evan’s American Gourmet Café delivers some of the best fine dining in town, in an unassuming vintage Tahoe cabin. But above all else, make sure to visit Heavenly’s daily Unbuckle Après Party, which Forbes dubbed “the best après ski scene on any mountain in North America.”

Stay
Lodging at Tahoe is divided into several main areas: the casinos, the gondola vicinity (Heavenly Village), the California and Nevada mountain bases and the lakefront. The Landing Resort & Spa offers the best of lakeside locale and proximity to the gondola. For ski-in/ski-out convenience, the Marriott Grand Residences at Heavenly Village is an excellent choice.

Play
No visit to Tahoe would be complete without a cruise on the world-famous lake, courtesy of the M.S. Dixie II. The Mississippi riverboat-style paddle wheeler departs from Zephyr Cove. 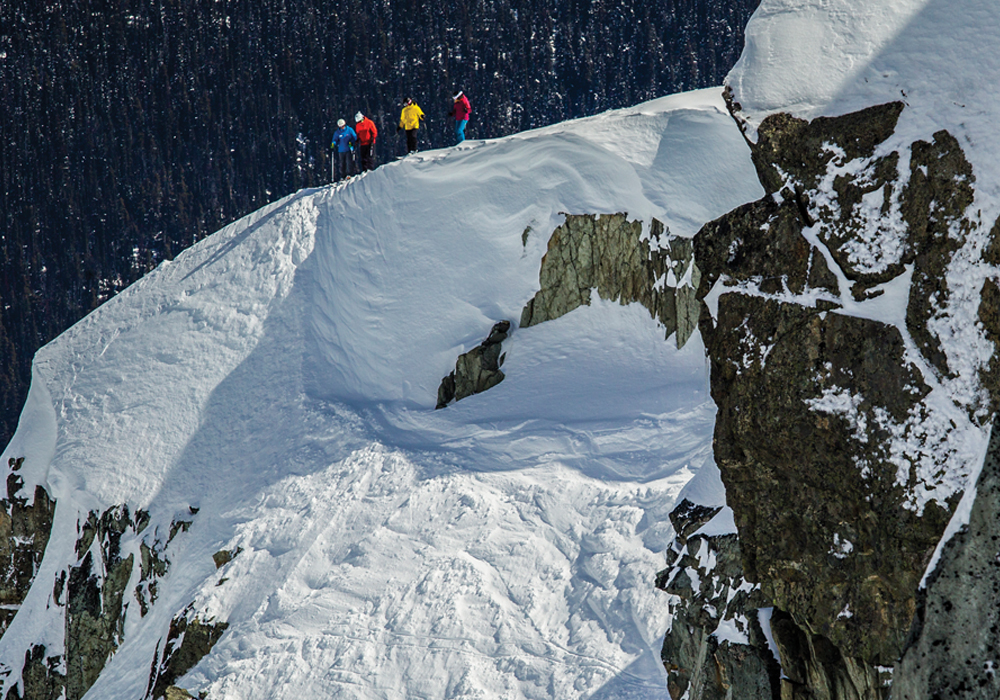 The warm temperatures and general lack of snow that plagued the 2010 Winter Olympics in Vancouver are a distant memory. This season, the mountains of British Columbia have been getting some of the best snow on the continent. Mega-resort Whistler Blackcomb tallied 133 inches in December alone.

The resort offers an eye-popping 8,000-plus acres of skiable terrain. The Peak 2 Peak gondola linking its namesake mountains holds the world record for longest free span between lift towers—the Eiffel Tower could fit beneath it at its high point over Fitzsimmons Creek. On the Whistler side, ride the Peak Express lift to the summit for unsurpassed views of the Coast Range before navigating back to Roundhouse Lodge where you can ski the runs that served as the men’s and women’s Olympic downhill courses. On the Blackcomb side, don’t miss a run down the Blackcomb Glacier. This is among the few locales in North America to experience glacier skiing, which is normally reserved for the European Alps.

Après Ski
The 28th annual SKI magazine reader’s poll gave Whistler Blackcomb top marks for its après scene. The epicenter is undoubtedly the Garibaldi Lift Company. Travel+Leisure named the GLC to its list of “world’s best après-ski bars,” and for good reason. Order one of their many varieties of a Caesar—a classic Canadian cocktail that includes vodka, Clamato juice, hot sauce and Worcestershire sauce—and you’ll know. Also, don’t miss Bearfoot Bistro’s Ice Room. Reputed to be one of the coldest vodka tasting rooms in the world, it offers dozens of international varieties of the spirit maintained at a toasty -25 degrees Fahrenheit.

Stay
Pedestrian-friendly Whistler Village at the resort’s base is vibrant and bustling. The adjacent Upper Village is a stone’s throw away, yet just far enough to offer a respite from the excitement. The Fairmont Chateau Whistler and Four Seasons Whistler—both located in the Upper Village—offer luxury and grandeur to match the mountains. For larger groups, booking an on-mountain ski chalet through Whistler Platinum is a great option.

Play
Whistler is one of only a handful of North American ski resorts that features an Olympic bobsled and skeleton track. At the Whistler Sliding Centre, rocket down the track at more than 75mph through the famous Thunderbird Corner in a four-person bobsled (trained pilot included). 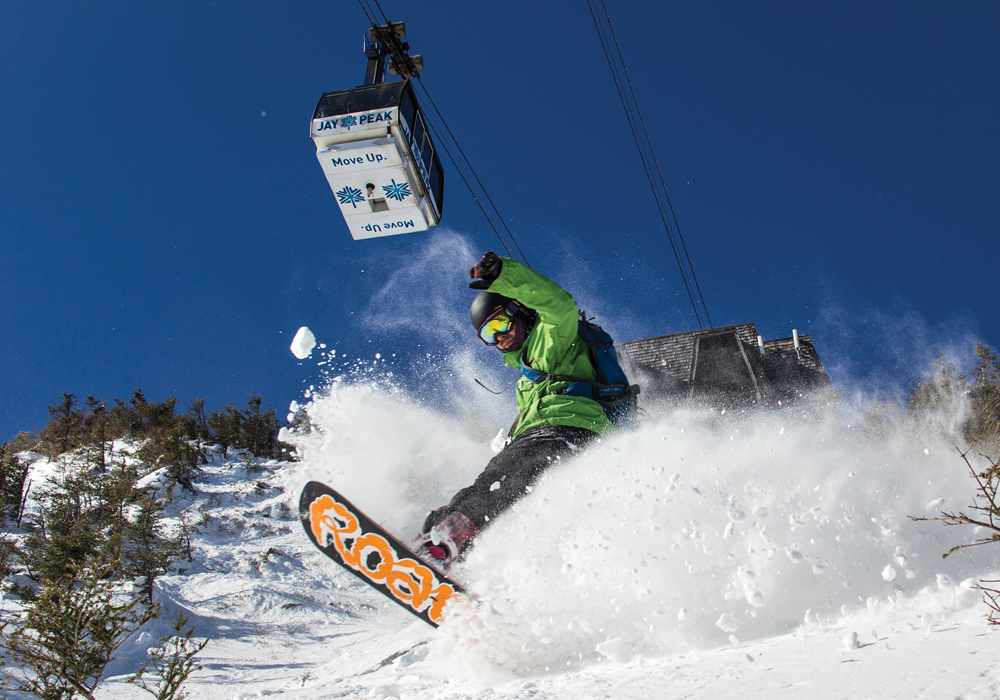 The massive blizzard that slammed Long Island (and much of the East Coast) in late January was like Mother Nature throwing salt in skier’s wounds. The snow line from the south-tracking storm didn’t extend any farther north than the mid-Hudson Valley, leaving the Northeast’s ski resorts essentially untouched. By February 1, Killington reported a paltry 33 inches of snowfall to date, Stowe claimed 75 and Whiteface logged 67 inches.

But one ski area stood out from the crowd: Jay Peak. By the beginning of February Jay reported nearly 100 inches of the natural white stuff. Why? A meteorological phenomenon known as the Jay Cloud that gives this northern Vermont ski area 350 to 400 inches of snowfall each year, rivaling many Western U.S. destinations.

If any Northeast ski area is going to deliver the goods this season, Jay is it. The mountain has just 385 acres of skiable terrain but is known for its abundant, powder-filled glades. Timbuktu and Everglade are two sure bets. Plus, Jay’s aerial tram, which transports up to 60 people at a time, summit chutes and cliffs offer an experience normally reserved for such esteemed locales as Jackson Hole, Wyoming.

Après Ski
Historically, Jay Peak had a sleepy après scene. The New York Times once even quipped that “Jay Peak really isn’t close to anything except the Canadian border.” But all that has changed; Jay has invested millions of dollars in expansion and upgrades in recent years. The rowdier, traditional bar scene can be found at the Tower Bar in Tram Haus Lodge. Find a more laid back experience at The Foundry Pub & Grille in the Hotel Jay. Either way, order a Jay Peak Tram Ale, brewed by Vermont local Long Trail Brewing Company.

Stay
Jay opened three new hotels in four years: the Hotel Jay, Tram Haus Lodge and Stateside Hotel. The former two straddle the iconic tram in the middle of all the action; Stateside is just less than one mile away at the resort’s secondary base area.

Play
Undoubtedly, Jay’s enormous Pump House indoor water park is the place to go when not on the slopes. In addition to huge slides, pools and a lazy river, it also boasts La Chute, a steep, 65-foot-tall plunge that rockets swimmers up to 45 miles per hour. There’s also a double-barrel Flowrider, a machine that creates a wave by pumping a fast-moving sheet of water over a slick surface so that guests can try their hand at indoor surfing.