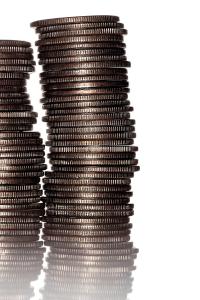 The first known coins come from the Lydian culture, a Western civilization now known as modern day Turkey. There are no definitive answers as to why coins were created, only theories claiming it was a solid way to give bartered items a true value. Lydia’s coins were created around the 7th century BCE and were made of electrum, which is a natural blend of gold and silver. Although the disks varied in shape and size, a standard weight of approximately 14.1 grams was issued and printed on only one side. Close proximity to Greece and surrounding Mediterranean cities caused coin usage to spread to neighboring kingdoms. Other areas like China used copper, bronze and other natural metals to form their currency. Early Chinese forms of money took the shapes of everyday objects, such as scaled-down versions of farm and domestic tools. Ancient Egypt utilized a payment system of erratically shaped objects made of precious metal, which were used for trade based on weight. The world’s first paper money didn’t arrive until around 900 CE when the Chinese decided to relieve heavy pockets and money sacks.